1. The Fall are an English post-punk band, formed in Manchester in 1976. Named after the English translation of Albert Camus’ novel, La Chute (The Fall) (1956), they are notable for their idiosyncratic and innovative music, leader Mark E. Smith’s enigmatic lyrics and drawling delivery, and for their subtle influence on several generations of musicians. Formed during punk rock’s rise, The Fall never quite fit into that movement or its post-punk/new wave offshoots. For over a quarter of a century, The Fall have continued to produce music which varies richly in both character and quality. The abrasive lyrics and instantly recognizable half-droned, half-ranted vocals of frontman Mark E. Smith provide the one consistent note through more than three prolific decades of dizzying personnel changes. An interview with Smith in May, 2004 reported “49 (band) members, 78 albums and 41 singles,” and also quoted the opinion of their longstanding fan, the legendary English DJ John Peel: “They are always different, they are always the same.”
2. Mark E. Smith sculpture 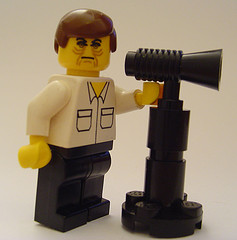 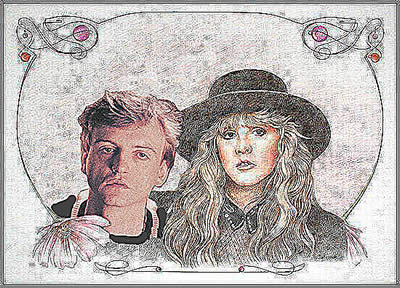 11. In January 2005, The Fall were the subject of an hour long BBC 4 documentary, The Wonderful and Frightening World of Mark E. Smith 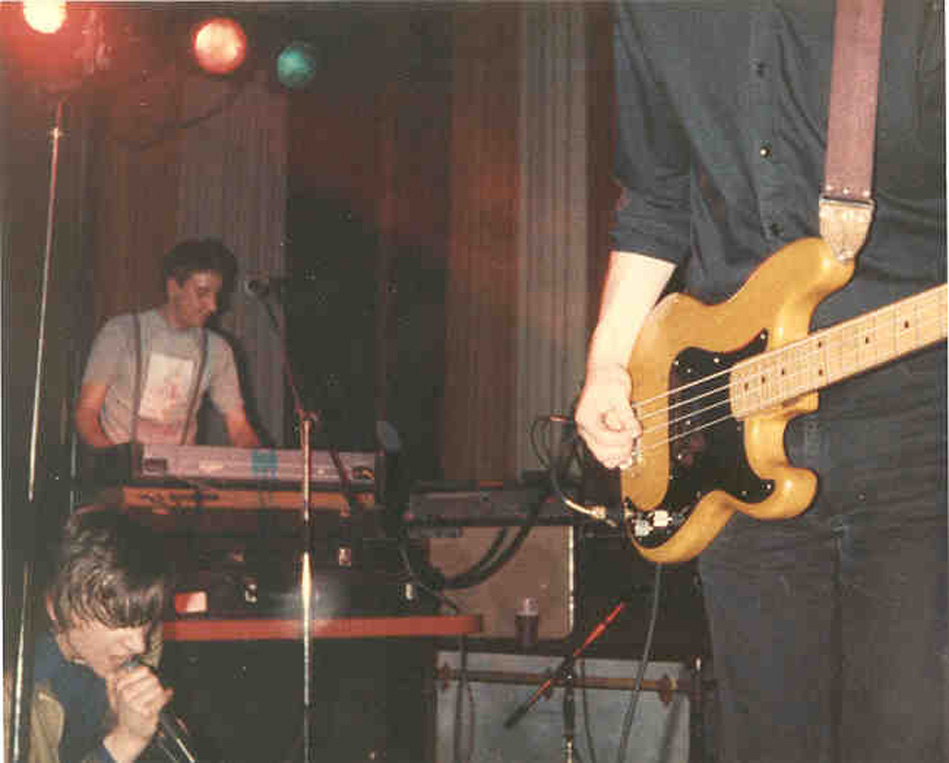 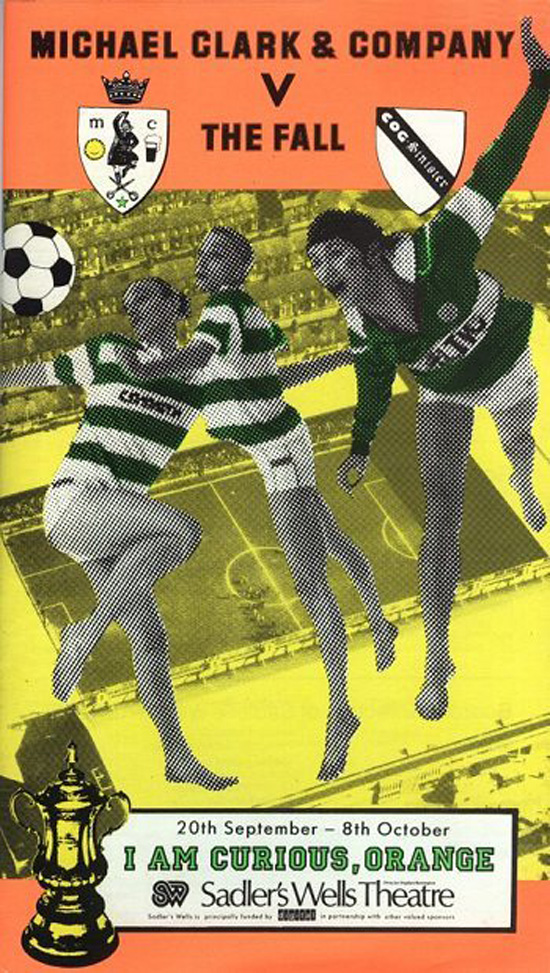 ‘The last thing most Fall fans expected the group to do in 1988 was provide music for a ballet, but in fact this is what they did. Of course, it helped that the Michael Clark company of dancers were some of the most avant-garde at the time in Britain and were inspired originally by the Fall’s “Hey! Luciani” single. The concept, very loosely, centers around William and Mary of Orange, and finds Smith arranging William Blake’s “Jerusalem” for the band, adding his own lyrics (“It was the fault of the government,” providing ironic contrast to the self-sufficiency espoused in Blake).’ — Answers.com 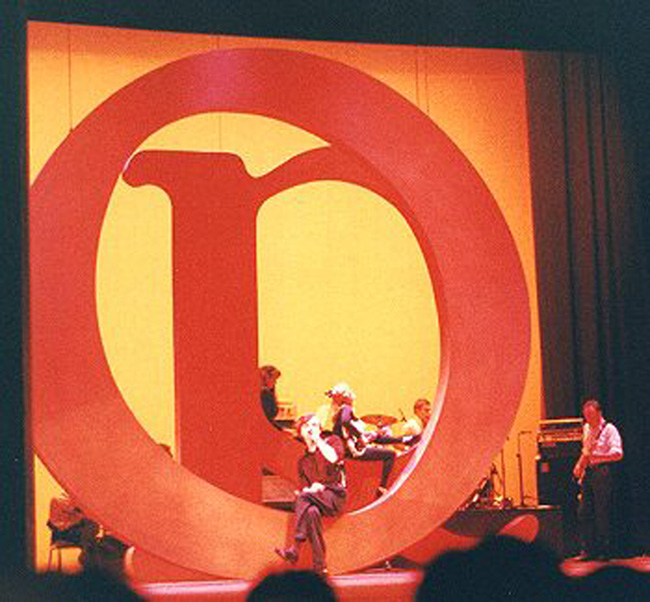 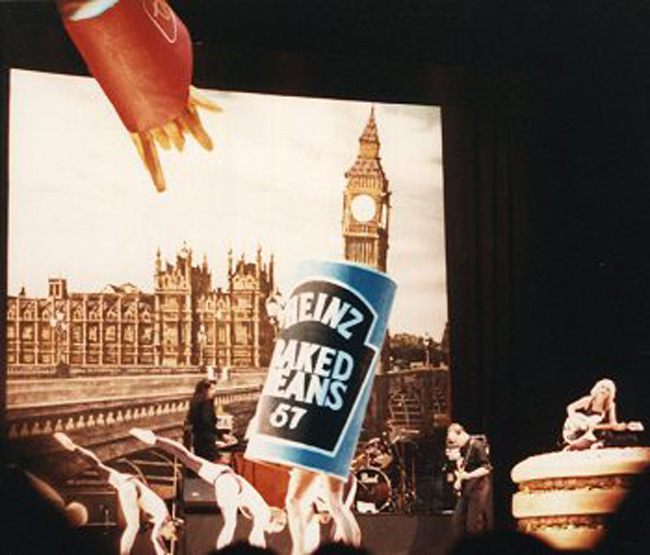 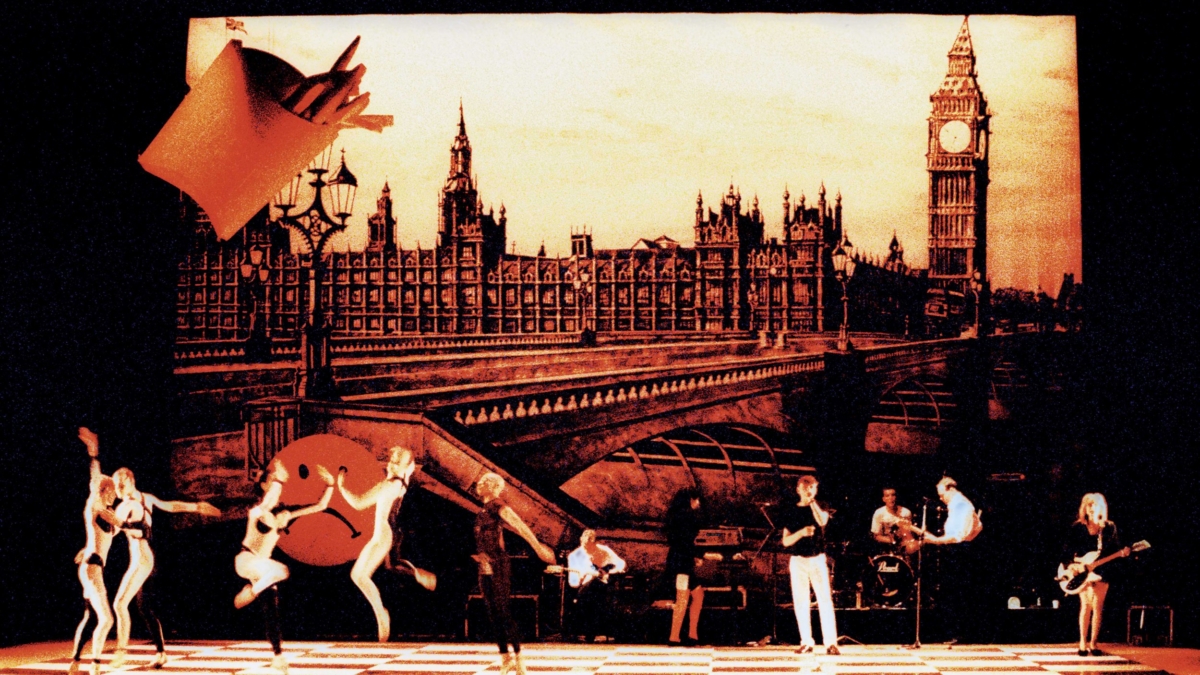 Watch a clip from ‘Hail the New Puritans,’ Charles Atlas’s documentary about the Michael Clark/Fall collaborations 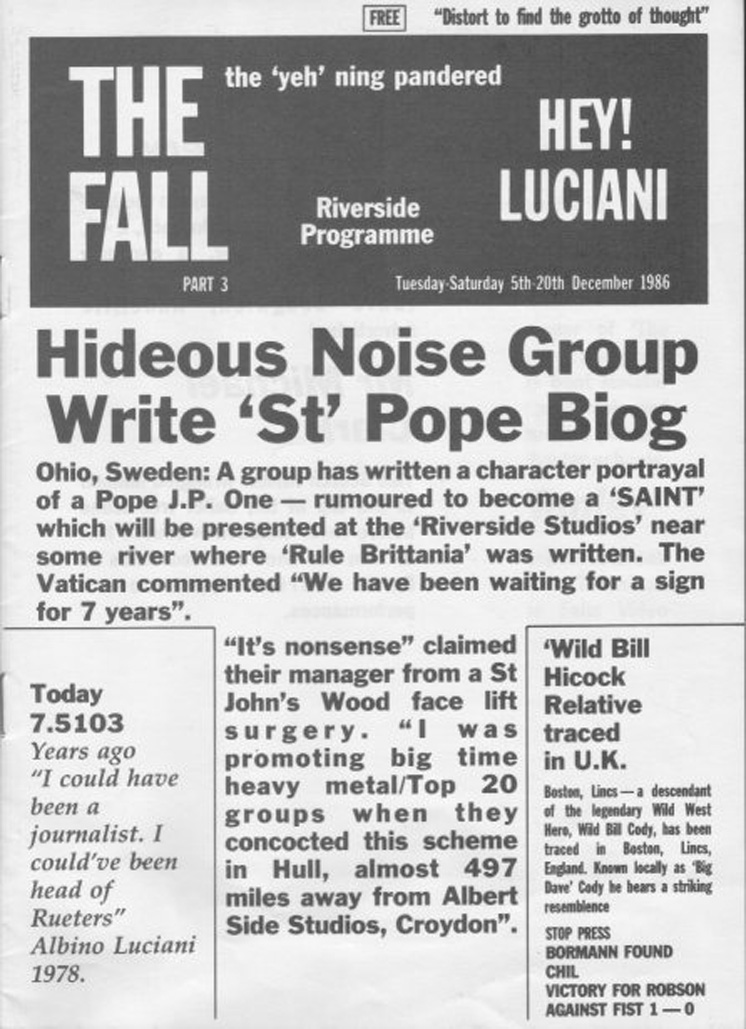 “‘Hey! Luciani’ lasts about 100 minutes and features new Fall music themes for each of the play’s main character, ‘Have Found Boorman’ (for the all-girl Israeli commando group who appear as a mysterious but vital connection in the thickening plot), ‘Sleep Debt Snatches’ which has a reggae atmosphere, a machine heart and spine cracking drumbeat, and ‘Informant’ which, fittingly in view of posthumous revelation of the cheeseburger being a narc is “the Elvis Presley type number.” Apart from The Fall, there’s Trevor Stewart as The Pope, Lucy Burgess as the ballet dancer and Pope’s right hand girl, Michael Clark has a brief role and Leigh Bowery, star of the excellent Smith-directed video for ‘Mr Pharmacist’, is head of accounts at The Vatican. ‘The play is a simulation of the conspiracy theory around Luciani Albino, Pope John Paul 1, says Smith. ‘The middle bit splits up other things – South America and Britain, for instance. No way is it a factual indictment of Catholicism or even The Vatican. People think when they hear it’s about the pope that it must either be a ‘rock musical’ or anti-religious statement or something. Which is a sad reflection on the way the theatre is viewed in this country. I chose the setting because the characters appealed to me and hopefully it makes good drama.'” — from NME, December 13, 1986 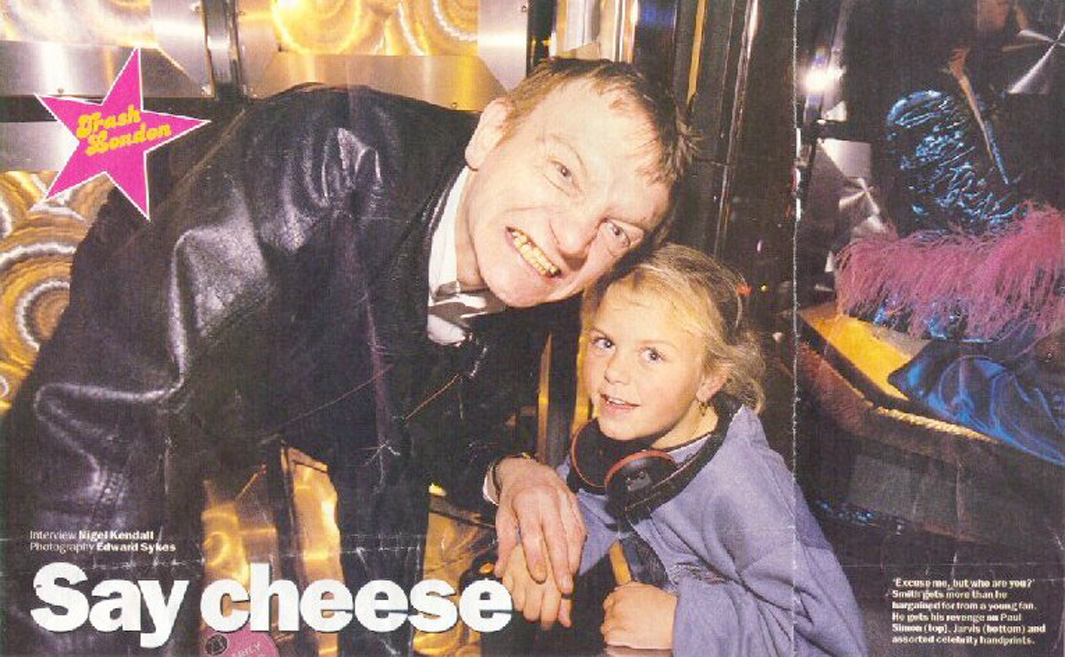 19. In 1989, the NME decided to host a ‘Rock Summit’ for their end-of-the-year issue.’ So they put Mark E. Smith, Nick Cave, and Shane McGowan together in pub, plied them with drinks, and recorded their conversation. 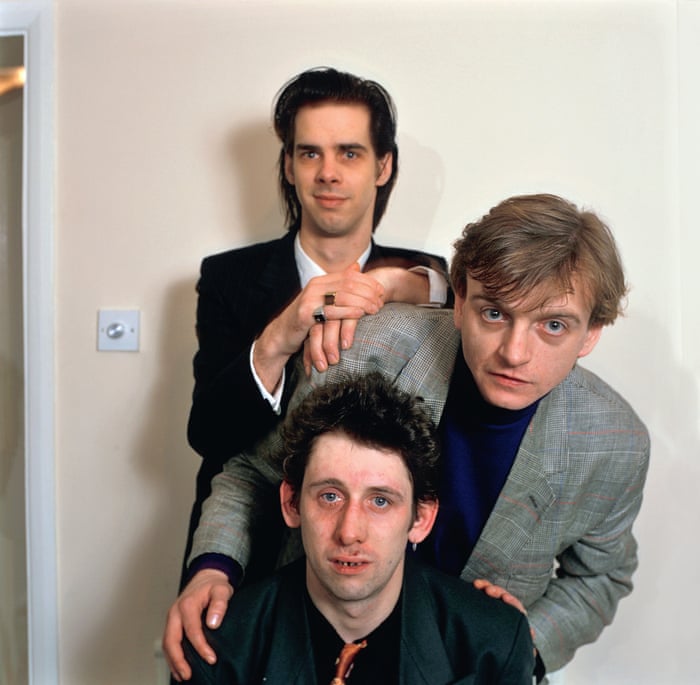 Nick Cave “I think we have all tended to create some kind of area where we can work without particularly having to worry about what’s fashionable.”
Mark E. Smith “Yes, fair enough. But I think there’s a lot of differences in this trio here. Nick was very rock’n’roll to me but he’s turned his back on it which was cool. Shane’s more, I dunno. To me the Pogues are the good bits from the Irish showband scene, like the Indians. You had that feel, probably lst that now. Your work’s good though.”
Shane McGowan “Fuck it man. Who wants to work in a place where there’s all these people looking at you ?”
MES “Are you talking about your gigs ? You should stop doing them, then.”
SM “Can’t afford to.”
MES “Fuck it, you could fight not to if you don’t like it.”
SM “…and leave the rest of them in the lurch ?”
MES “Nah, the rest of your band will always complain about not working. If you’re paying them a wage tell them to stay at home and behave themselves.”
SM “It’s a democracy our band.”
MES “Why aren’t they here with you then ?”
SM “Cos the NME didn’t want to interview them.”
MES ‘Cos nobody’d recognise them.”
SM “That’s it ! They want to interview us because we’ve got distinctive characteristics. They just want to interview three high-brow loonies.”
MES “In that case you should have brought your mate Joe Strummer along.”
SM “I said high-brow loonies.”
(read the rest)

20. Watch Mark E. Smith read out the classified football results on the BBC 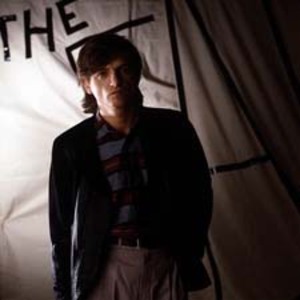 ‘Blue cheese contains natural amphetamines. Why are students not informed about this?’

‘I’ve done all these scripts for a science fiction series, actually, a British science fiction series, worked me fucking balls off on them. Six stories, really short. Did the music, everything, made it all tight as fucking fuck. And they said it was complete crap. Then The X-Files comes on. Same company, they want to see me scripts, because The X-Files is running out of ideas, or they want to use the music or something. I said send ’em back, I just need to look through them, and I fucking burned them.’

‘You should read “The Rise and Fall of the Third Reich”, that’s proper journalism. I mean, he followed fucking Goebbels around, stayed up all night doing stuff, listening to tapes of broadcasts. Nowadays, they can’t spell, they can’t fuckin’ paragraph for a start and that puts ’em right out in my book. You want to know what I read? The Daily Mail. You want to know why? Because everything is spelt correctly. I know it’s a load of fuckin’ bosh, but at least you understand it.’

‘English people will go to Africa and work out all the different tribes, but they won’t look at themselves. It makes me laugh, this ashamed of being English thing, cos it’s the most tolerant fucking country in the world. We went to Wales with Super Furry Animals, and it was like the fucking ‘Wicker Mari – end of the night, they’re all pissed, singing Welsh songs, running around outside. The bouncer’s going ‘You’re English, you’d better stay in the van; and they’ve all got Welsh flags and stuff. We go back to the van and there’s like 3,000 Welshmen with fucking torches going ‘Adoobedoobedoo’. Imagine if that was fucking Germans or something!’

‘John Walters wrote me a letter and said, you know, ‘you are the worst group I’ve ever seen in the [laughs] in the history of mankind’ [laughs]. He was good like that, John Walters was. You ever meet him? No, he was f**king fantastic. He said, ‘you were the worst, tuneless, rubbish I’ve ever heard’, you know, ‘even worse than Siouxsie and the Banshees’. This is what he wrote ‘you’re even worse than Siouxsie and the Banshees. I didn’t believe it was possible.’ You know what I mean? [laughs] He was a gem, what a gem.’ 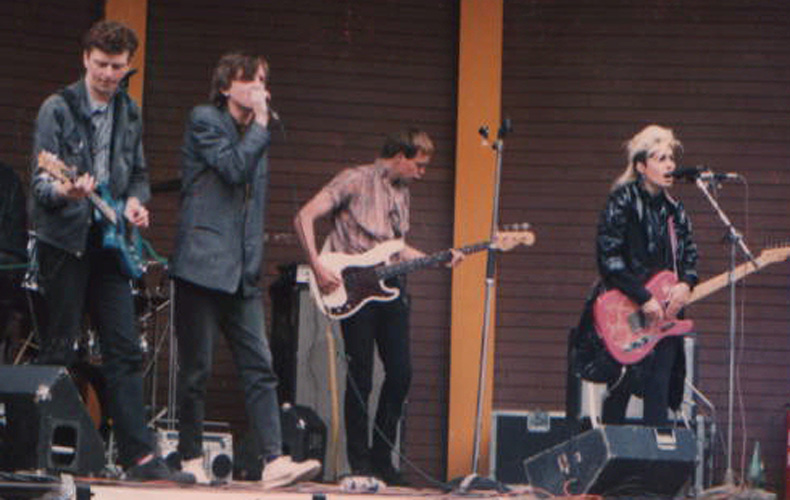 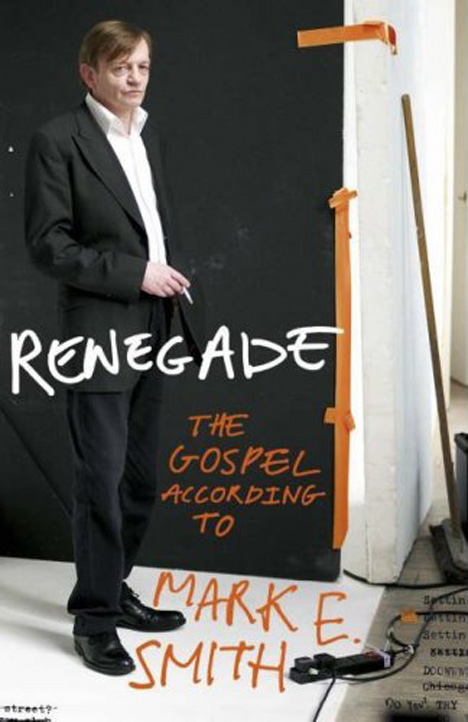 The first autobiography by the legendary leader of The Fall. Still going after thirty years, The Fall are one of the most distinctive British bands, their music — odd, spare, cranky and repetitious — an acknowledged influence on The Smiths, The Happy Mondays, Nirvana and Franz Ferdinand. And Mark E. Smith IS The Fall. For the first time we get to hear his full, candid take on the ups and downs of a band as notorious for its in-house fighting as for its great music; and on a life that has endured prison in America, drugs, bankruptcy, divorce and the often bleak results of a legendary thirst. 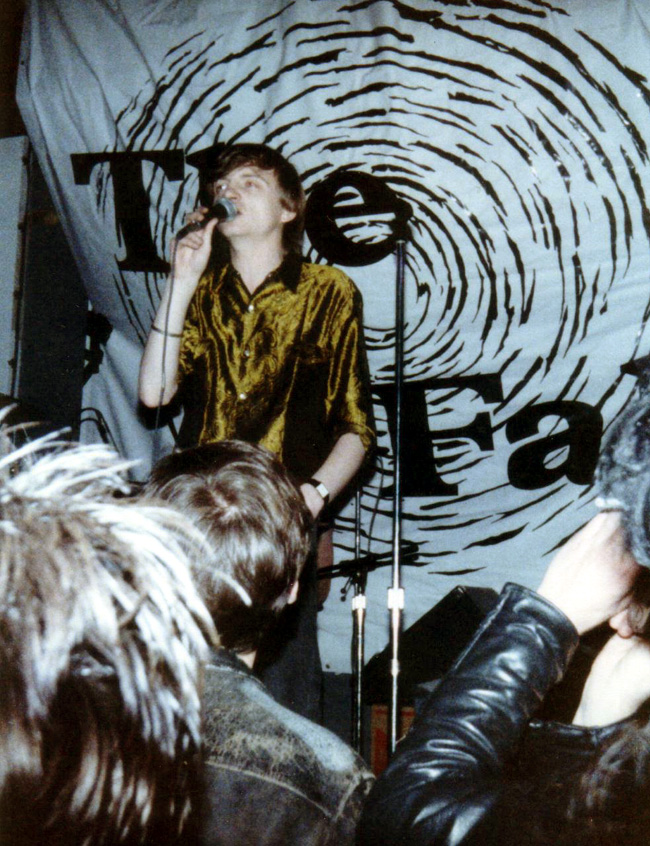 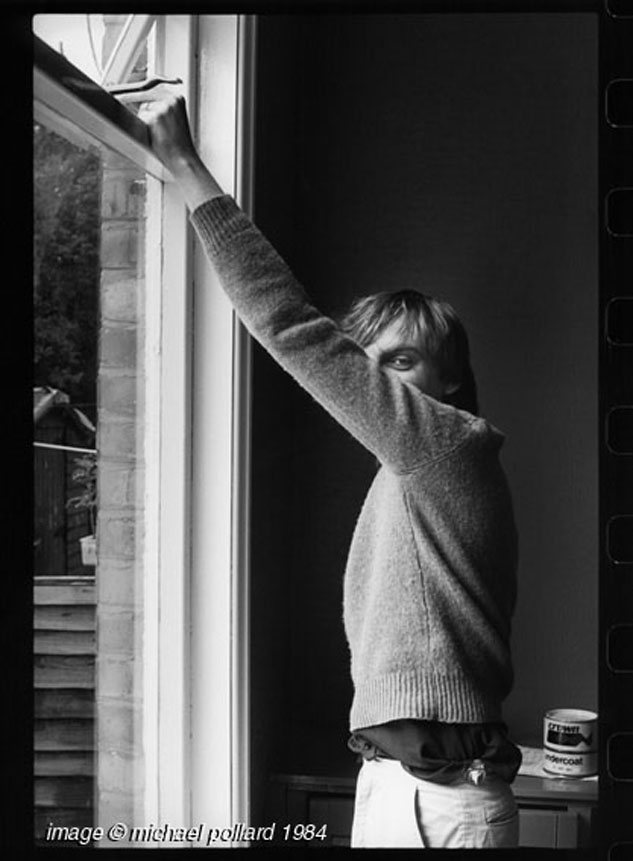 p.s. Hey. ** Misanthrope, George, Do those projects. It’s raining here too, but I’m cool with it. David sounds like a disaster-in-progress. Or like a wild oats sewer who’s going to need a lot of luck. I wish you (and him) all the positive and sobering vibes possible, man. Really stressful. ** Ferdinand, Hi. Me either: obsessiveness, not needing much to. Yeah, I listened to Chris’s Wake Island deal yesterday, and that reference was very cool. Cheers back from a rain-surrounded spot in Paris. ** David Ehrenstein, Yes, I was friendly with Lucille LaSueur. In fact, here’s a polaroid I took of Lucille in 1984. ** Bill, On the … menu? Urp. You’re wild. Where do you hear about all these books I’ve never heard of, i.e. Isabel Yap’s? I’ll go hunt it. Thank you, B. ** Sypha, I’m probably showing my age in saying that I have no idea who Krang is and have never watched any incarnation of Teenage Mutant Ninja Turtles. Golem there looks like a very tough boss, no? ** Dominik, Hi, hi!!! I looked to see if there were any stray videos or anything online from that piece of Ishmael’s and mine (‘The Undead’) that Sherry/Keith was in, and I found a very short, kind of blurry excerpt from part of it. Sherry/Keith is the boy with dyed blond hair kissing and hugging Ishmael stage center. Here. Oh, I did a post about ball-jointed dolls here years ago. I should find and restore it maybe. Thank you! Love being such a sloppy kisser he wins the Nobel Peace Prize, G. ** Steve Erickson, Yeah, I’ve seen the term ‘elevated horror’ around. I think ‘coopted horror’ would be more accurate. I would definitely like to see a documentary that accurately portrays David W. as the complicated, great guy he really was and not more things coopting select aspects of him with the goal of creating a queer saint. That’s tough with your friend. I guess just let him know you care and are available and hope? Unless you think it’s so serious there needs to be an intervention or something? ** Jack Skelley, Oh, man, you just murdered me, mouth-first, in the most humane possible way. Jesus. Congratulations! ** Okay. Today you get a really, really old restored post from about 14 years ago that I originally made to mark the occasion of Mark E. Smith’s 50th birthday. So he was both alive at the time and still running on all cylinders or whatever they say. There are some dead links in there, but a surprising number of them still work. Anyway, a slightly cob-webbed tribute to the great and powerful Fall. See you tomorrow.