‘Stan VanDerBeek is a legendary name in the history of experimental film. A restless adventurer who began making experimental animated films in the 1950s, VanDerBeek filmed happenings, designed windows for Tiffany’s and worked with John Cage and Claes Oldenburg.

‘He also explored the artistic possibilities of new technologies of his time: video, computers, even the fax machine. He was artist-in-residence at Bell Labs and at NASA.

‘VanDerBeek’s 1963 film Breathdeath is full of animated collages satirizing gender roles and politics. There’s also an arresting staged scene — a woman sits on a bed nuzzling a figure made from an empty shirt and trousers, topped by a television set showing men’s faces; she looks into the camera while “I Put a Spell on You” wails on the soundtrack.

‘VanDerBeek made dozens of these collage films in the 1950s and early ’60s, using altered clippings from magazines and newspapers to create whimsical but pointed commentary. The films look like they must be the primary inspiration for Terry Gilliam’s Monty Python animated sequences, which appeared a few years later.

‘But VanDerBeek did not start out as a filmmaker. He attended Black Mountain College in North Carolina to study visual art. There he met people who were transforming art: composer John Cage, choreographer Merce Cunningham, painter Robert Rauschenberg. But painting wasn’t enough for VanDerBeek. “VanDerBeek called himself a technological fruit picker,” says Joao Ribas, who is curator at MIT’s LIST Visual Arts Center.

‘VanDerBeek’s only technical training in filmmaking came from working on animation for a CBS children’s show in the 1950s. He would use the editing equipment after hours to complete his own films, cajoling the night watchman to let him in even after he lost the job. The collage films were designed and created at his home, as his oldest daughter, August, recalls.

‘In the mid-’60s, VanDerBeek ordered a grain-silo kit and used the top to build a domed theater in the artists’ cooperative where he lived in rural New York. The inside space was 31-feet high. August VanDerBeek says she helped build what her dad called the Movie Drome.

‘”There was of course a big event when everybody came from New York City,” August recalls. “Andy Warhol and different people came to see the first showing. We had a beautiful cloth and pillows. There was a circular tray that was about probably 10 feet or 12 feet in diameter, that had many slide projectors and a lot of 16mm projectors, and it would just spin around the whole room. We would lie down and watch this incredible collage of images. He would find slides. He would make films and then edit them for the pieces.”

“There was of course a big event when everybody came from New York City,” August recalls. “Andy Warhol and different people came to see the first showing. We had a beautiful cloth and pillows. There was a circular tray that was about probably 10 feet or 12 feet in diameter, that had many slide projectors and a lot of 16mm projectors, and it would just spin around the whole room. We would lie down and watch this incredible collage of images. He would find slides. He would make films and then edit them for the pieces.”

‘Her father made a somewhat portable version called the Movie Mural that curators have tried to approximate in Houston. It’s not really a dome and not quite wraparound. The table of projectors still has those cranky antiques — the carousel slide projector — but it’s updated with video projectors too, since 16mm projectors could not run for hours without breaking down. The table doesn’t spin, as the original did in the Movie Drome, but it still creates a dizzying array of sight and sound.

‘Blues music overlaps with Hollywood film clips of Gene Kelly or Humphrey Bogart. Photos of classical statuary and temples slide in next to VanDerBeek’s own kinetic line drawings of figures. Newspaper headlines compete with the Rolling Stones. The Movie Mural is the dominant feature in the exhibition; no matter where you are in the Museum’s long open space, you can always hear that energetic circus of sound.

‘VanDerBeek envisioned a global network of these environments linked by satellites. He called it the Culture Intercom (also the title of the exhibition). The term suggests a prescient imagining more than 40 years ago of today’s Worldwide Web and social media.

‘VanDerBeek recorded his exuberant notes and proposals for the future on media that is now obsolete media or quite perishable: yellowing notebook paper, paper punch cards he used with some of the first computer-imaging software at Bell Labs, floppy disks, film stock that crumbles away. The exhibition reclaims this material in all its intimately detailed glory, right down to hand-drawn maps for people coming to the Movie Drome.’ — NPR 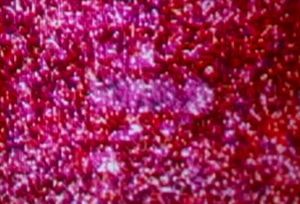 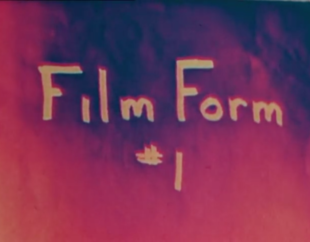 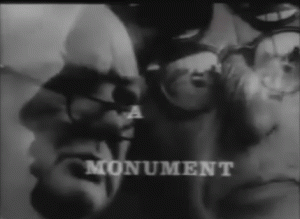 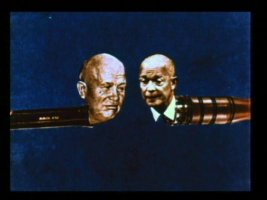 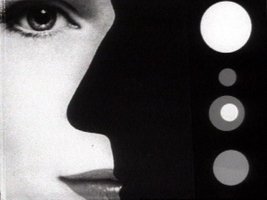 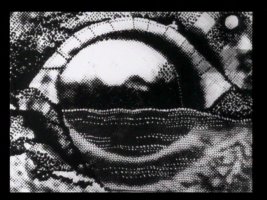 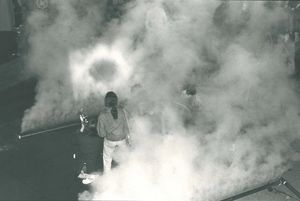 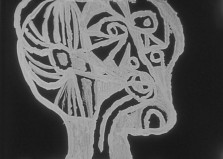 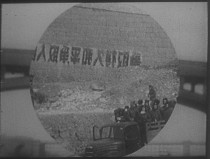 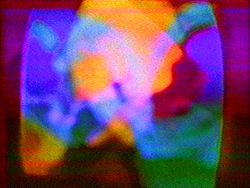 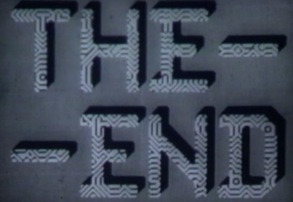 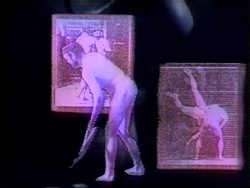 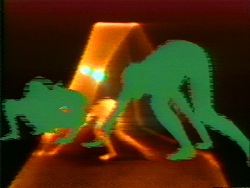 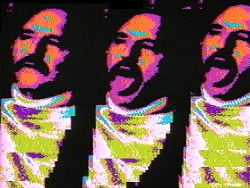 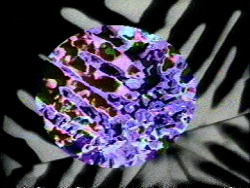 _____________
Stan Vanderbeek: The Computer Generation (1972)
‘Documentary from 1972 by John Musilli. Gygory Kepes’ dream for the new MIT Center for Advanced Visual Studies was to create a thriving laboratory for the creation of new artworks and artistic research within the context of MIT. Established in 1967, the Center appointed several long-term fellows in its first decade, including the pioneering experimental filmmaker Stan VanDerBeek. VanDerBeek became enthralled with MIT’s digital universe. Everywhere, he found computers and intensely creative engineers and scientists pushing the absolute limits of technology. VanDerBeek was as interested in how computers were shaping MIT and the larger society as he was in conducting his own experiments. The Computer Generation is a documentary that captures VanDerBeek’s expansive and fascinating ideas about computers and society and that features clips of his own investigations conducted largely at MIT. “What does an artist do with a machine?” he asks in the film. “Amplify the artist’s thought. And at last the artist is in the electronic matrix, no longer confined to his studio.”’ — Network Awesome 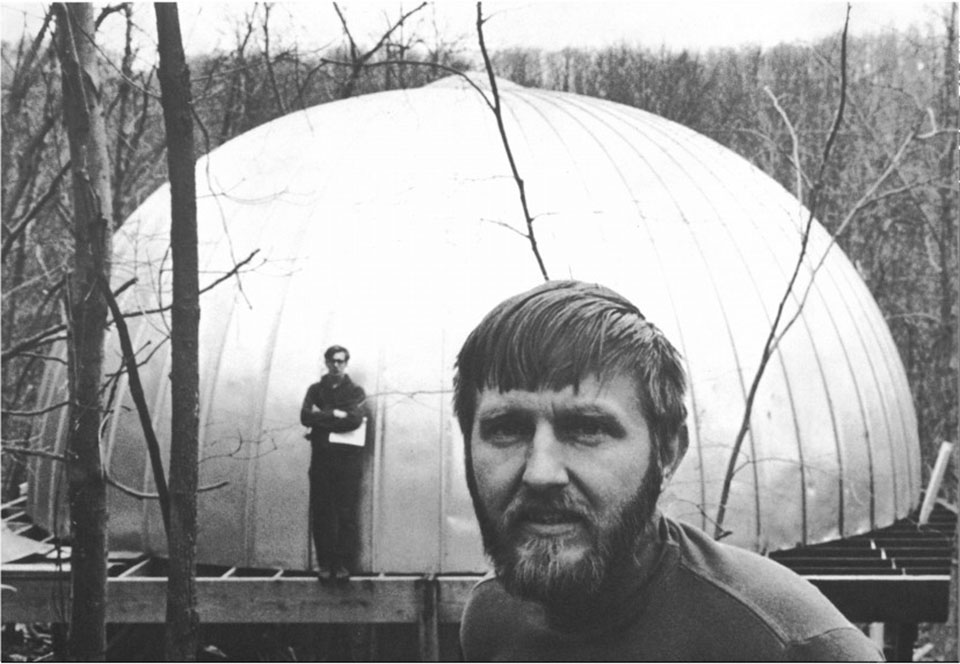 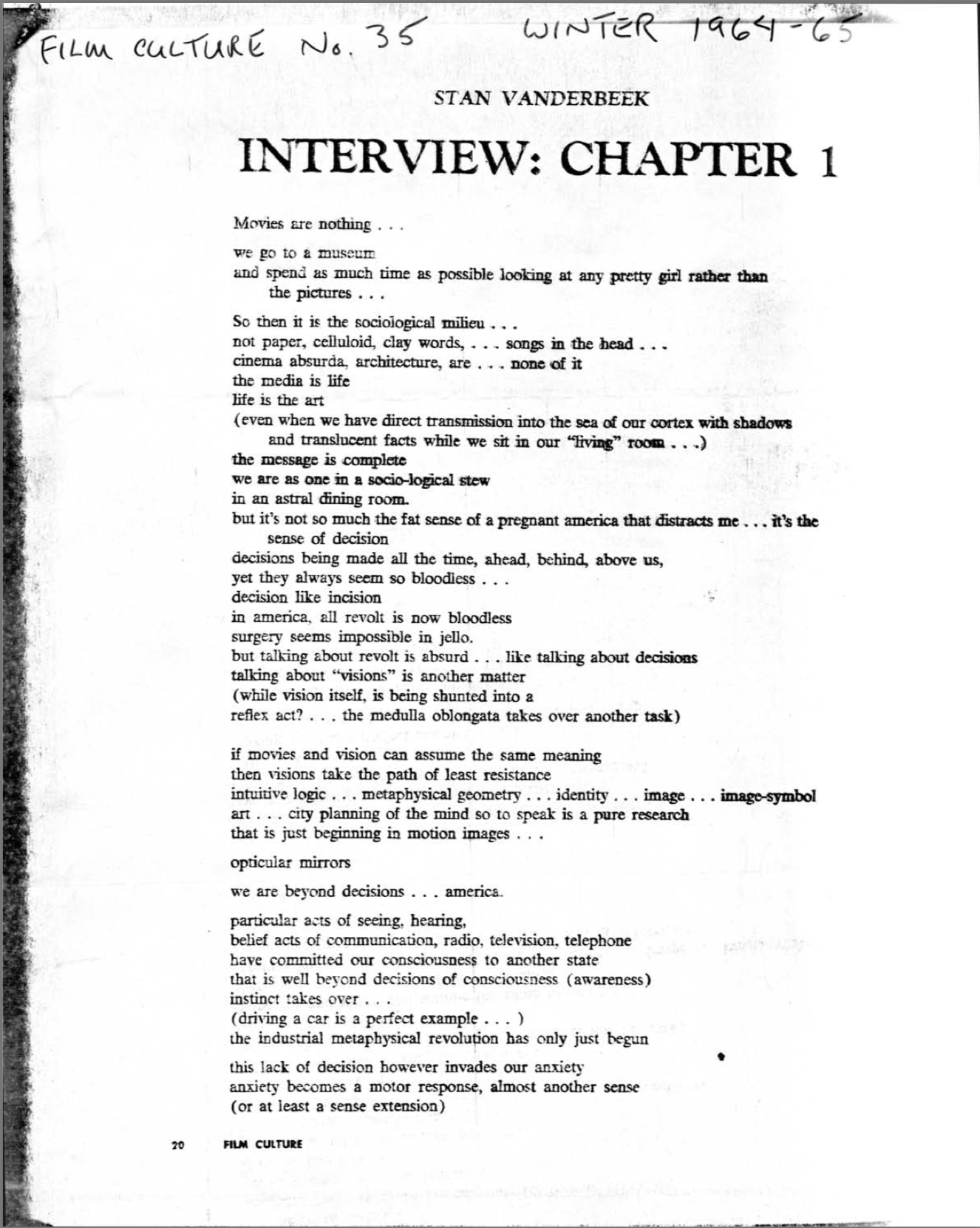 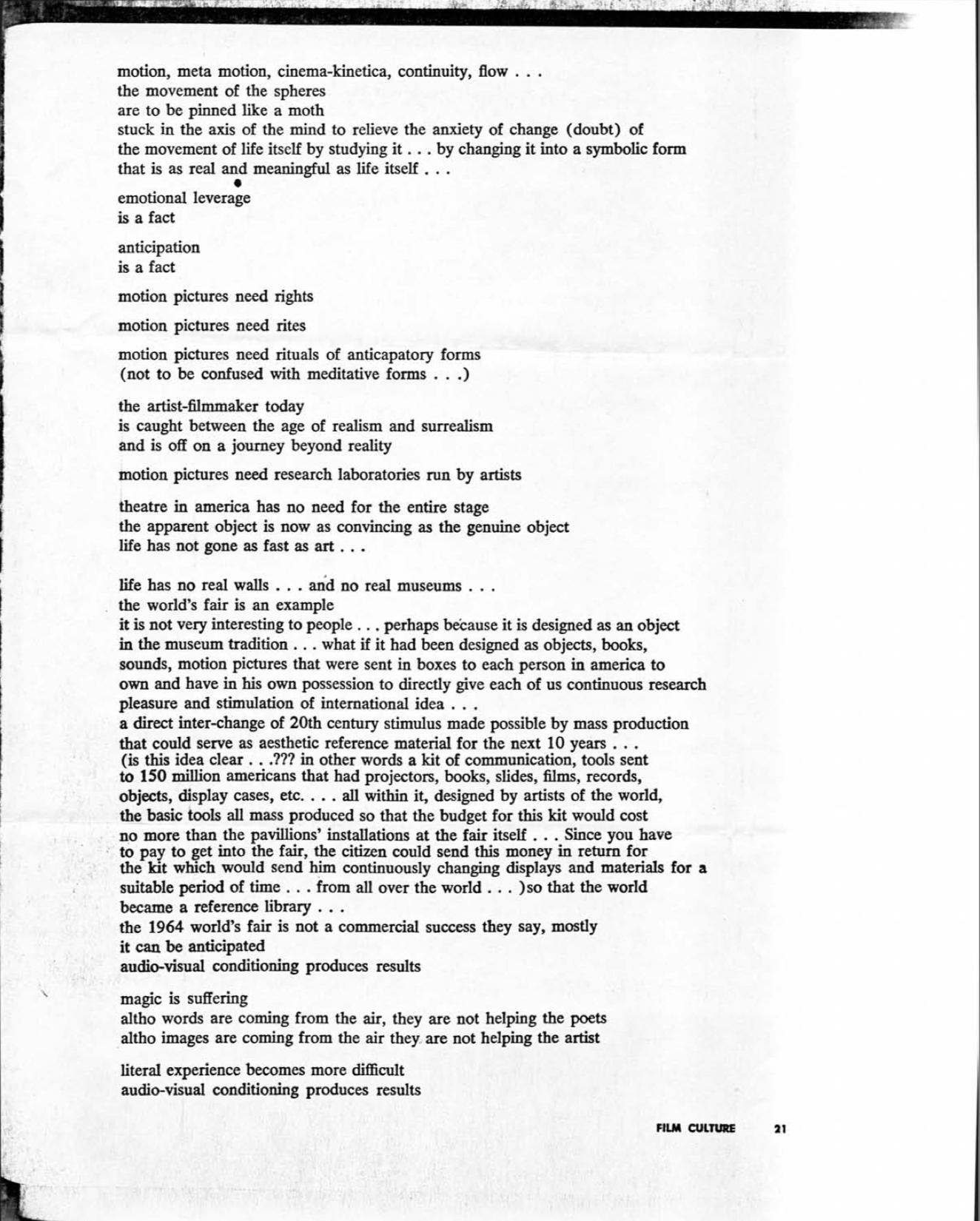 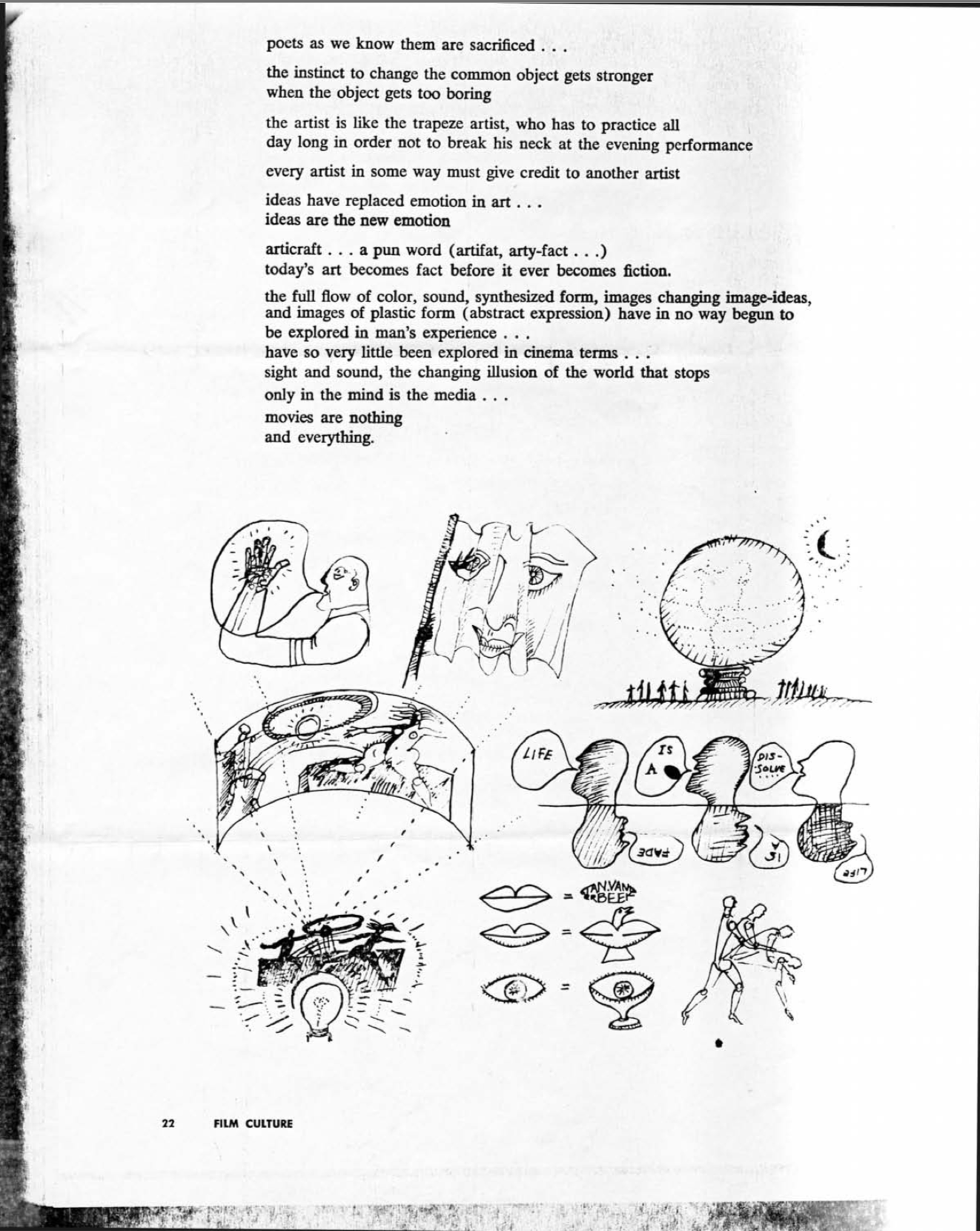 ______________
Euclidean Illusions (1978)
‘A fantasy film of illusive geometry, changing and rebuilding itself by computer animation, unique visual magic done while artist-in-residence at NASA in Houston in conjunction with Richard Weinberg.’ — Filmmakers Coop

______________
Symmetricks (1972)
‘A computer-created animation of high speed stroboscope mandalas with molecular-like energy. The surprise of this film is the color produced from the strobing black and white symmetrical images. Done with an electronic stylus on a special computer at MIT. This film demonstrates the possible use of the computer interacting with the graphic artist.’ — Stan VanDerBeek

________________
Film Form No. 1 (1970)
‘A hypnotic dance film of colors, dancers, forms and music all sweeping through the tv tube eye, mixed together into a flow of female bodies and colors, a brilliant study of color printing from black and white. ” S.V. “The mysterious, gracefully repeated dancer of Stan Vanderbeek’s Film Form No. 1 puts the video film in a perspective that makes the mere ordering of space for a few minutes seem reason enough for the whole perilous business of reducing time and movement to anything so substantial as film or tape.’ — Roger Greenspun

_______________
Poem Fields Nos. 1-8 (1968)
‘Each film was constructed using Knowlton’s BEFLIX computer language, which was based on FORTRAN. The films were programmed on a IBM 7094 computer. The films were created in black and white, with color added later by Brown and Olvey. This particular version is taken from a film with some color decay.’ — AT&T Tech Channel

_______________
The Human Face is a Monument (1965)
‘Camera animation over stills, “a portrait study of mankind, beginning with an infant and growing up to old age and death… using still pictures from the collection of ‘magnum photos on the range of expression and moods of people from all over the world, it reflects the human condition.’ — S.V.

________________
Breathdeath (1963)
“… a film experiment that deals with the photo reality and the surrealism of life. It is a collage-animation that cuts up photoes and newsreel film and reassembles them, producing an image that is a mixture of unexplainable fact (Why is Harpo Marx playing a harp in the middle of a battlefield?) with the inexplicable act (Why is there a battlefield?). It is a black comedy, a fantasy that mocks at death…a parabolic parable.’ — S.V.

_______________
Science Friction (1959)
‘The technological explosion of this last half-century, and the implied future are overwhelming, man is running the machines of his own invention… while the machine that is man… runs the risk of running wild. Technological research, development, and involvement of the world community has almost completely out-distanced the emotional-sociological (socio-“logical”) comprehension of this technology. The “technique-power” and “culture-over-reach” that is just beginning to explode in many parts of the earth, is happening so quickly that it has put the logical fulcrum of man’s intelligence so far outside himself that he cannot judge or estimate the results of his acts before he commits them.’ — Stan Vanderbeek

p.s. Hey. ** David Ehrenstein, Hi. That’s true, isn’t it? I’ll watch for that Clift doc. Aw, Jack Larson, what a sweetie he was. ** Steve Erickson, I see, about the Grasshopper situation. Figured it had to be something like that. I’m not so interested in Bon Iver or the Nationals, so I don’t know. Maybe. ‘Jeanette’ is kind of a mess, but it’s a curious, fun mess. We too are definitely surprised so far about ARTE’s expectations and possibly — we’ll see — demands. Now that they have our new proposal, which gives them most of what they say they want without really disrupting what we originally proposed, we’ll find out at our next meeting with them, on Sept. 20, what they actually are going to require of our series because it’s a bit hard to tell at this point. We’re steeling ourselves for the worst and hoping for, well, not the best but the better, I guess. Thanks for the support. ** Jamie, Hey, hey! I can imagine. About the readying. Sure, email me when you’re here, and we’ll make a plan. From Blighty … if I wasn’t heading to Blighty in a couple of weeks, I might have a wish list, but I think I can hang in here until then, but thank you! See you so very soon! May Wednesday touch everything you need to do with a magic wand. Herculean strengthened love, Dennis. ** Shane Christmass, Hi! Yes, indeed re: ‘Rollercoaster’. It was shot at the Magic Mountain park in LA, now Six Flags Magic Mountain. I haven’t seen it since forever. The Sparks cameo occasioned one of their more wonderful songs, ‘Big Boy’, but I don’t remember if it actually made the film’s cut. Thanks a lot, man. Oh, let me send you my address by email or FB. I’ll do that shortly. Have a great one. ** _Black_Acrylic, Hi. Cool, I’m glad the book intersected. Right, understood, the in-between phase, not fun while it lasts, but always necessary to get the juices upped enough to deliver. Your body had a busy day there. Sweet about your talk next week! Are you going to write out a speech or wing it using notes, or … ? Very cool. ** H, Hi. Yeah, I just saw that it’s hot there, and I am almost literally praying that that heat goes away before we get there. Let fall please be fall. We get there the night before the first event. We’ll see if we can have the time to get over to Brooklyn. That would be really nice. Our schedule seems to be being filled up for us, but hopefully not completely filled. Happy Wednesday. ** Right. If you guys don’t know Stan VanDerBeek’s marvelous films, you now have a golden opportunity to, and I hope you’ll employ it. See you tomorrow.

Spotlight on … Cris Mazza Something Wrong With Her (2013)