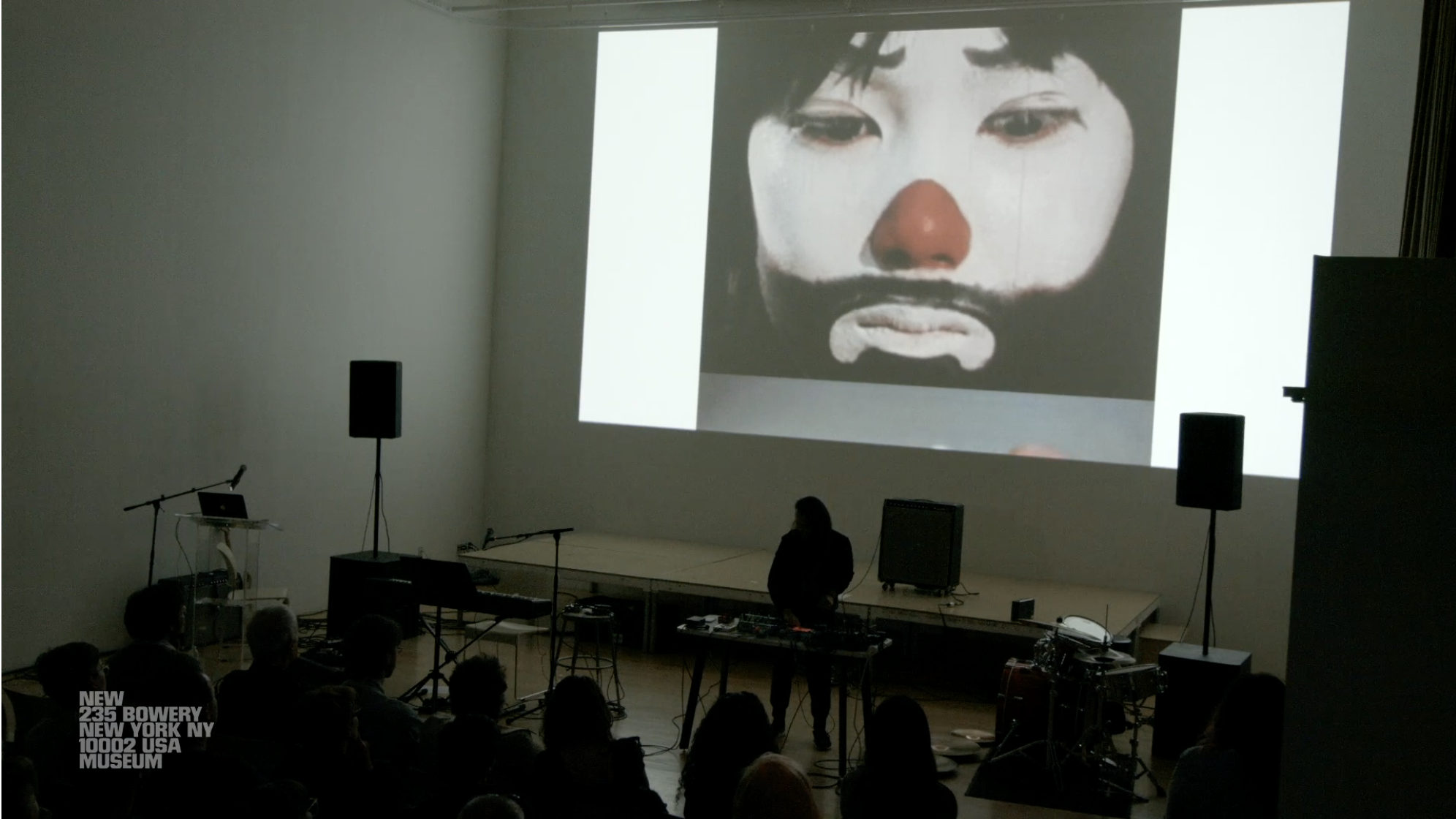 “Violations” was a response to Google’s recent deletion of author Dennis Cooper’s blog (for “violations of terms of service,” without further explanation), and a celebration of the innovations in writing represented by a series of GIF novels he drafted there. In a then-recent article for the New Yorker concerning the Google controversy, Jennifer Krasinski described Cooper’s approach to these novels: “Thinking of [GIFs] as language, Cooper places them together, stacking them or opposing them to create a story—and, in so doing, effectively forging a new form of fiction.” While the contents of Cooper’s blog were eventually returned by Google, the situation prompted urgent reflection on the borderlines of trust, interpretation, and freedoms of speech at stake between users of social media and the corporations who provide such services.

This event convened a small handful of Cooper’s closest friends, allies, and artists whose work he admires to imagine what it might mean to “read aloud” from these GIF texts. The presenting artists work across a spectrum of practices and include poets, musicians, choreographers, and dancers. While the program sought to draw attention to the vulnerability of artworks produced through social media, it also celebrated the highly anticipated release of Cooper’s third GIF novel, Zac’s Freight Elevator (on Kiddiepunk Press), which was temporarily lost when the blog was deleted.

from the Cutting Room floor

Blake Butler: What gave you the idea of writing novels using only animated GIFs?

Dennis Cooper: The GIF novels evolved from this thing I was doing on my blog where I would create these tall stacks of images—maybe 70 to 120 of them—that illustrated a particular theme or idea. I began introducing GIFs into the stacks, and then I became so interested in GIFs that I started making all-GIF stacks. That’s when I started to notice all these really curious, unexpected things were happening in them and between them when they were combined.

So I started experimenting with that, trying to create really deliberate effects and to organize the accidental things that were happening. Finally, I got the idea to make fiction pieces out of them. That idea excited me, partly because, as much I love writing language-based novels, I’ve always wanted to submerge the story/characters/plot much deeper within the novels’ structures than I’ve been able to. The closest I’ve gotten was with The Marbled Swarm where the immediate story and characters are just templates of and secret entrances to this whole substructural world existing inside the novel. But they were still there, hogging the novel’s top level.

With a GIF novel, I could see the possibility of those things being built on the bottom, and that the structure and style and trickery in which they were imbedded could be the dominant aspect.

BB: It’s kind of strange how distinctly ‘readable’ the chain of GIFs in the novels are, despite being all image-based. How did you begin to construct the feel of a story underlying the organization of those stacks?

DC: I think the animated GIF is a super rich thing, mostly unintentionally? For the novel, I thought of them as these crazy visual sentences. But unlike text sentences, they do all the imaginative work for you. They render you really passive. They just juggle with your eyesight, and you’re basically left battling their aggressive, looped, fireworks-level dumb, hypnotizing effects to see the images and the mini-stories/actions they contextualize. I think, ultimately, they’re mostly rhythms, or they reduce their imagery and activity, etc. to illustrative components of these really strict rhythmic patterns that turn the eye into an ear in a way.

My idea is that if you make a novel out of them, the visuals in the individual GIFs can serve double duty in the same way that the instrumentation and vocals in music samples do. They become just the texture of the loop’s rhythm, and that somehow seems to isolate the GIFs’ content from their source material. When you combine and juxtapose the stacks, if you do it carefully, you can break or disrupt their individual rhythms in a way that makes their imagery either rise to the surface or become abstractions. Basically, you can then use their content and appearance as sets and actors and cinematography in a fiction. They can hold their references, if you organize them to do so, and you can use those associations to create short cuts to some idea or emotion you want to get across, or they can become quite malleable and daydream-like, or you can empty them until they’re just motions that are as neutral as a text.

The really exciting thing for me is that the narratives can be as unrealistic or abstract or senseless or trivial or abject or unreadable as you want, and they will always remain inherently pleasurable.

BB: You are a super intense mapper and organizer with your novels, so I was constantly looking for keys to the system, things that linked the project throughout. Is the inspiration of these thru-ways all gut, or gut at first and then figuring the gut out and building outward? Or something else entirely?

DC: It starts with a series of motifs or even of things I want to use. So I just set off in search of related GIFs. Basically, I just did what I think you can only do—use keywords plus the words “animated GIF” in a general Google image search, and also on Giphy, Tumblr, etc. And then I would add in adjectives to try to get into the less public recesses where GIFs reside. If there aren’t very many interesting GIFs in the motif I’m trying, I find other motifs in the garbage that ends up contextualized in the original category, and those are sometimes useful and end up mutating the original motif. It’s not really very different than the way I write text novels because I always construct dense subsystems in my novels involving motifs and images that work together via what I call “internal rhyming” of different sorts. The main difference formally is just that you’re limited by online resources with a GIF novel rather than being limited by your imagination when it’s text.

Long story short, making the novels involves a weird and excitingly difficult combination of working in an extremely planned out way and also kind of in an extremely intuitive way too. Sometimes gut comes first, sometimes it’s the opposite, and often it’s simultaneous.

p.s. Hey. So my new GIF novel has been born this morning. You can download it for free or view it on-line using the link up at the top of the post there. And the blog has been temporarily commandeered for a little celebration. I’m very proud of ‘Zac’s Drug Binge’ and think it’s my best GIF novel yet, so, of course I hope you’ll grab and read it. Thank you in advance, everyone. ** David Ehrenstein, Hi. Thank you for the history lesson. And I’m glad you and Bill are well! Everyone, Mr. ‘knows of what he he speaks’ David Ehrenstein marks the occasion of Stonewall’s 51st anniversary on his FaBlog, and do go get enlightened and entertained as well. Here. ** Bill, Hi, B. Nice that Ferdinand successfully introduced to the label. It’s chock full of cool and odd stuff. Did you hit the march? I guess you guys, unlike LA, have been spared the new bars closure measure. It all looks so grim from over here. Ugh. I know this is heresy, but I don’t like Shane Carruth’s films. I’ll look at the teaser though. Thank you. ** h (now j), Hi! I hope you like the GIF novel, duh. ** Ferdinand, Thank you so much, man! It was quite the hit. Serious, heavy traffic and all. Very best to you! ** Damien Ark, Hi, Damien. All thanks to Ferdinand. Is that true about chubby guys being mostly non-entities in gay fiction? I confess i read little lit that falls under that rubric. Surely there must be ‘bear’ or ‘chubby chaser’ fiction out there, but I suppose it’s probably pretty rote and pulpy. Anyway, be the fixer, yes. Bon day from Paris. ** _Black_Acrylic, Thank you so much, Ben. I really enjoyed your selections. Oh, excellent on both of your fronts! ** Thomas Moronic, Thanks, T. Yeah, there are, like, dozens of those old posts, but I’m going to be sparing with the rebirths for … well, I can’t think of a reason. So maybe I won’t be sparing. Lovely to see you, maestro! Oh, I found a funny (as in awesome) old guest-post of yours that I’ve restored for … soon. ** Steve Erickson, Hi. Glad the post insinuated. And speaking of … Everyone, Here’s Mr. Erickson. Listen up and click accordingly, not necessarily in that order. Steve: ‘Here’s a song I wrote today, “Minesweeper”. It’s mostly an exercise in using chords rhythmically and percussively, with little melody.’ Well, your description of the Johnnie To makes it sound very him and like his other films, no? Although I’ve never found the earlier ones exhausting, but they are a particular taste thing. Anyway, thank you for the report. His films do tend to open over here, so I’ll have a peek. ** Right. Today is fully introduced, and I hope you enjoy, and I hope you’ll want to get my new GIF novel. Enough said. See you tomorrow.