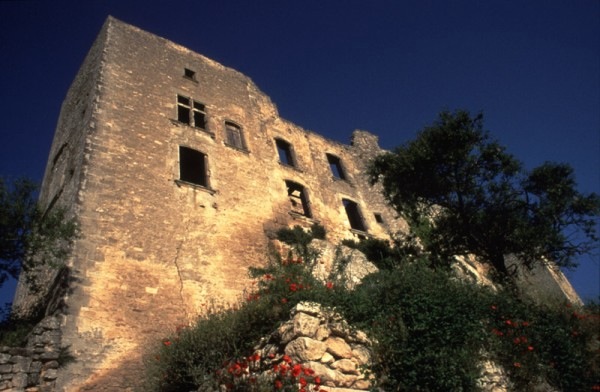 The Marquis de Sade’s castle is in a little village called Lacoste, only 25 miles east of Avignon in Provence, southern France’s most seductive idyll of lavender fields, vineyards, and quaint B&Bs.; Sade moved into this castle in 1771 in an attempt to escape the scandal he had provoked in Paris. The Marquis had inherited this castle from his grand-father in 1716. The building originally had 42 rooms, a theatre and a chapel. The castle was pillaged during the French Revolution and finally demolished in 1816, with its hewn-stones being sold piece by piece. 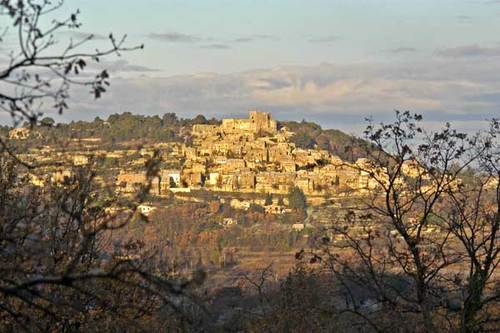 Sade’s castle at La Coste, a pinnacle of pale gray fieldstone commanding breathtaking views over the valleys of the Vaucluse, sits on a flat, rocky two-acre plateau that surmounts its village like a hovering eagle. As we see it in our own century, it only retains its moat, parts of its walls and ramparts, and a few half-demolished rooms; and from a distance the building now evokes the toothless face of a ravaged giant. Yet this arid site, scorched by sun in summer, ravaged in winter by icy winds, in every way extreme, is still one of the most romantic sites in France, and as evocative a ruin as you will see in Europe. It conjures forth the bloodthirsty monks, the gruesomely debauched noblemen and the persecuted virgins who live in Sade’s novels more flamboyantly than in any other French fiction of his century. 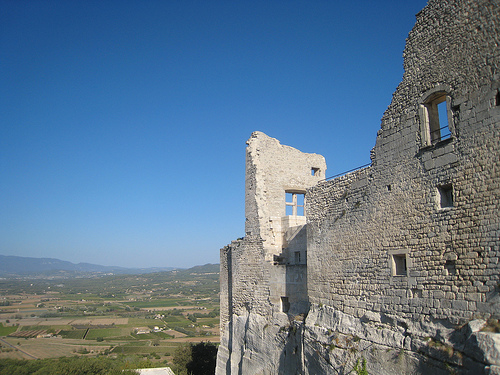 ‘I parked by a medieval fortress wall; ahead lay a stone arch engraved with the words Le Portail des Chèvres, the Goats’ Gate, the entrance to the upper part of the village. The houses were shuttered, so I walked cautiously up a steep alley, trying not to slip on the uneven cobblestones as the rain gushed in a channel between my feet, then I climbed a trail littered with weeds and loose chunks of masonry. And there was the Château Sade. It still appeared to be half ruin, with a veil of crumbling outer walls, yet the core has been renovated to a habitable state.’ — Tony Perrottet 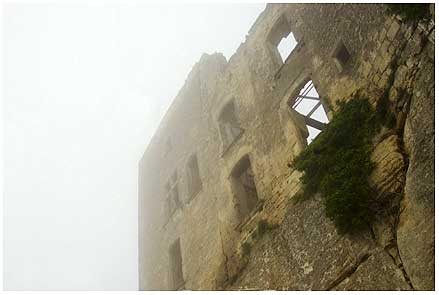 This 42-room redoubt was Sade’s most beloved residence. He visited it often as a child, and after his father gave it to him as a wedding present in 1763, he lived here for long stretches of his 20s and 30s—his feral prime. The château soon became the core of his fertile imaginative life. As biographer Francine du Plessix Gray points out in her classic At Home With the Marquis de Sade, its position hovering above the village fed Sade’s outdated fantasies of feudal inviolability, where he could act out his rabid carnal desires with no fear of reprisal. Even while he was in prison, the château remained a font of inspiration for Sade’s grisly literary works—a Walden Pond for the polymorphously perverse. 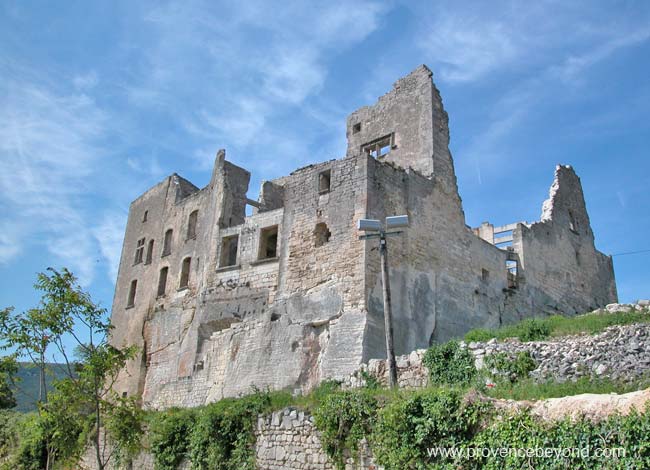 Essentially, the château was the mise-en-scène for some of his more outrageous real-life escapades. To take one example, it became the setting of a light-hearted romp dubbed by biographers “The Little-Girls Episode.” At the end of 1774, the charismatic, 34-year-old marquis came to winter at Lacoste with his family and a string of fresh-faced household servants he’d hired in Lyon, including five unsuspecting virgins. These were intended to supplement his more knowing staff, such as the lovely housekeeper Gothon, whom Sade had hired because she sported “the sweetest ass ever to leave Switzerland,” and the studly male valet Latour, by whom Sade liked to be sodomized while prostitutes watched and cavorted. For the next six weeks, Sade dedicated himself to corrupting the captive minors. As far as historians can discern, he held them hostage in the château’s dungeon, forcing them to act out scenes from pornographic literature as well as Sade’s own intricately stage-managed sexual rituals. (A control freak, Sade like to choreograph every detail: As a character complains in one of his comic fictions, “Let’s please put some order into these orgies!”) Modern French wives are legendarily indulgent of their husbands’ peccadilloes, but Sade’s wife, Pélagie, took spousal freedom to new levels by overseeing this marathon debauch, keeping the five girls compliant, and then hushing up the ensuing scandal. When the police came knocking, she helped bribe the outraged parents and spirit the girls, decidedly damaged goods, away to convents. 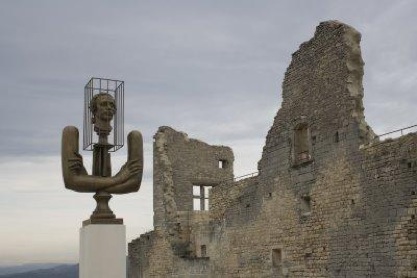 ‘I puddle-jumped through the castle’s former moat and climbed in the pelting rain up to the wild plateau of Sade’s old estate. This was once a splendid garden and orchard, where the dashing young marquis and his three children would frolic on summer days. (He was, by all accounts, a devoted father, with a fondness for playacting and games like hide-and-seek and musical chairs.) Perched on a strategic precipice, was a shiny, new bronze sculpture of the Divine Marquis himself. Erected in the summer of 2008, it displays Sade’s bewigged 18th-century head surrounded by a cage—Sade the perpetual prisoner. After being seized by police during a night raid in 1777, he spent most of his life in prisons and nuthouses, including 13 years in the Bastille and 11 in Charenton Asylum, the setting for the film Quills. Both proved futile efforts to censor his literary outpourings.’ — Tony Perrottet 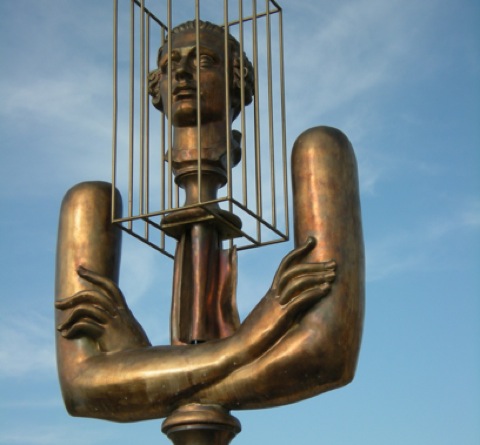 Some 40 years after Sade’s death, poet Baudelaire wrote that if a statue of Sade were ever erected, thousands would come to lay flowers at its feet. Well, the crowds might have been thin on this rainy day in October, but there’s no question that the marquis can bring in the fans. His presence in Lacoste 250 years ago has given the village a notoriety it might otherwise lack. And what began as a trickle of a few lecherous pilgrims has escalated exponentially since the Château Sade was snapped up by—of all people—Pierre Cardin, the elderly haute couturier based in Paris. 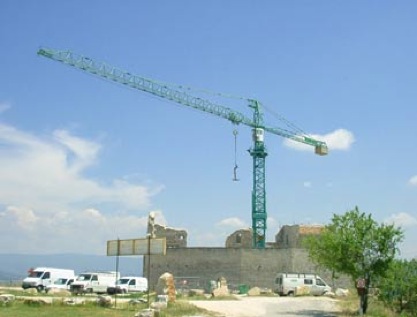 The billionaire fashion icon was evidently tickled by the Sade connection when he purchased the decrepit castle seven years ago for a nominal 1 million francs, including 70 acres of the estate and an oil painting of the marquis. In the village, rumors flew: Some said Cardin was related to Sade; others whispered that Cardin is bisexual and thus wanted to vindicate the broad-minded writer’s memory; still others alleged he was looking for some mythical Sade family treasure. Since then, Cardin has renovated the château as his holiday residence and has started an annual summer arts festival on the grounds, luring crowds from Paris and the Riviera. 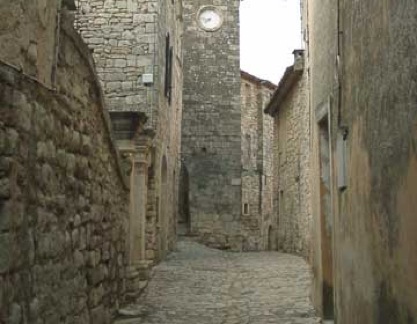 And Cardin has certainly caused more tumult in Lacoste than anyone since Sade himself: In recent years, the fashion designer has been buying many of the village’s historic structures in a real-estate grab along the lines of Ted Turner in Montana. The reaction among some villagers has been violent. Lacoste is being torn apart by a miniature civil war with a viciousness that only the French can manage. The ageing couturier says he wants to “leave his mark” by turning Lacoste into a refuge for world artists, complete with luxury hotels, a top restaurant, a de Sade cafe and a piano bar. But a growing group of villagers warn that his plans are ruining this Provençal community. 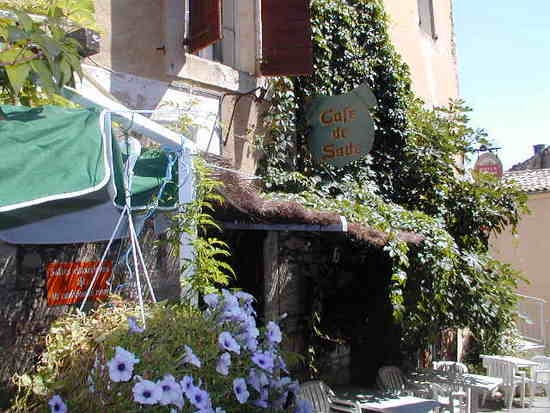 Lacoste, once a Protestant and later a communist stronghold, is no stranger to rebellion. Campaigners have already gone to a tribunal to stop Cardin building a Greek amphitheatre in the local quarry. But the row escalated this week after Cardin insinuated in a TV interview that his village opponents were bumpkins who didn’t understand his great vision. They now call him an egotistical “invader” bent on killing village life. 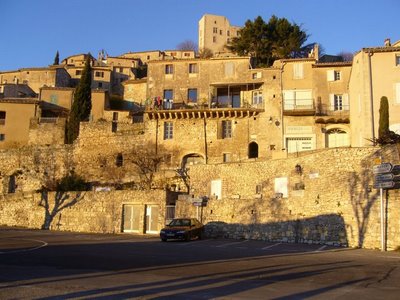 On the tiny square at the top of winding cobbled streets, 85-year-old Cardin steps out of his black BMW in designer glasses and a tweed waistcoat, on his weekly inspection of his rural empire. Rue de Basse, the tiny, main village street now hosts 12 building sites bearing Cardin’s name. He has bought more than 20 houses and owns almost the whole quaint and winding street. The newspaper shop has his name over the door, he has built two galleries, a boulangerie, a boutique and plans a restaurant and two hotels. He owns two castles, employs dozens of people on his projects, and a van emblazoned with “Pierre Cardin perfumes” can be seen regularly climbing the hill. 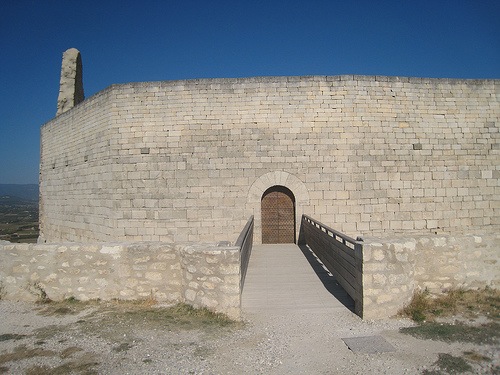 “I’m happy here,” Cardin says. “I just want to make the village beautiful.” He declines to comment on the outrage caused when he recently likened himself to a “seigneur” and said that while other rich people gamble or collect stamps, “I collect houses.” 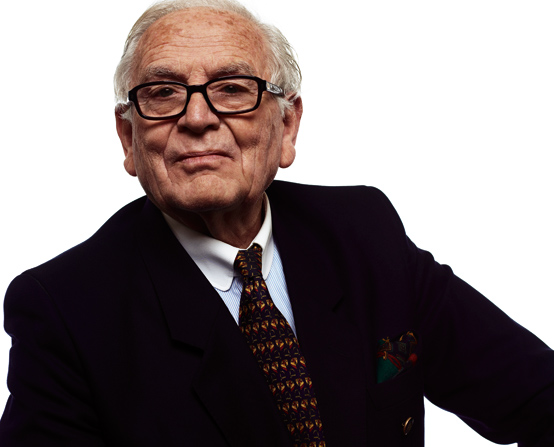 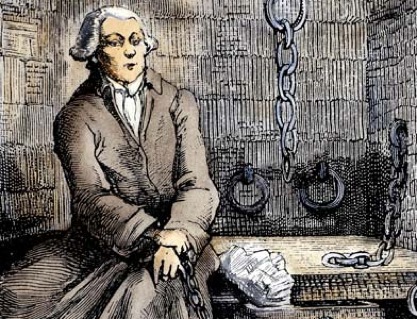 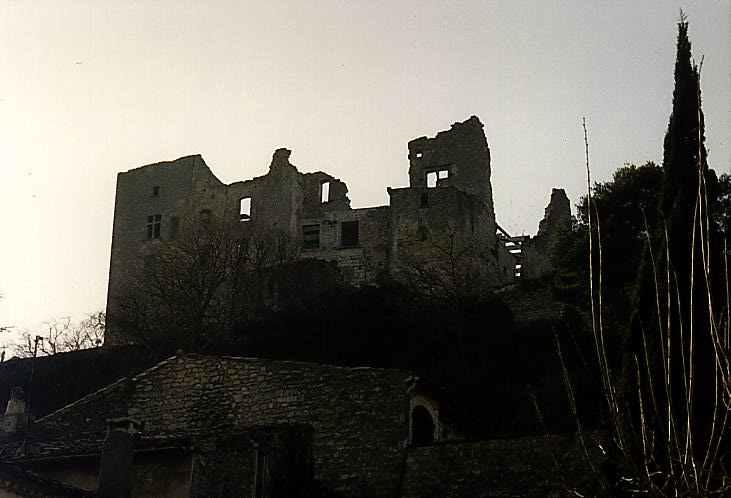 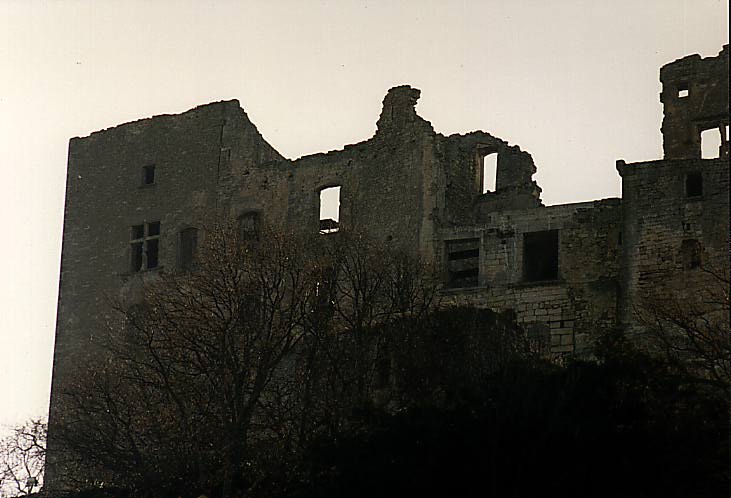 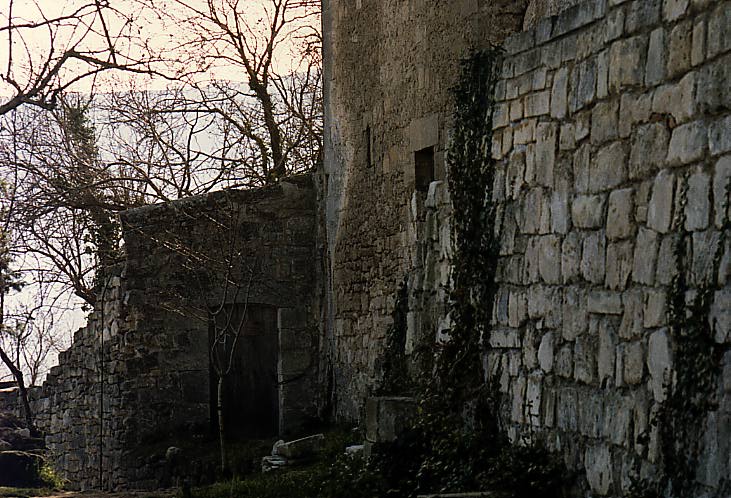 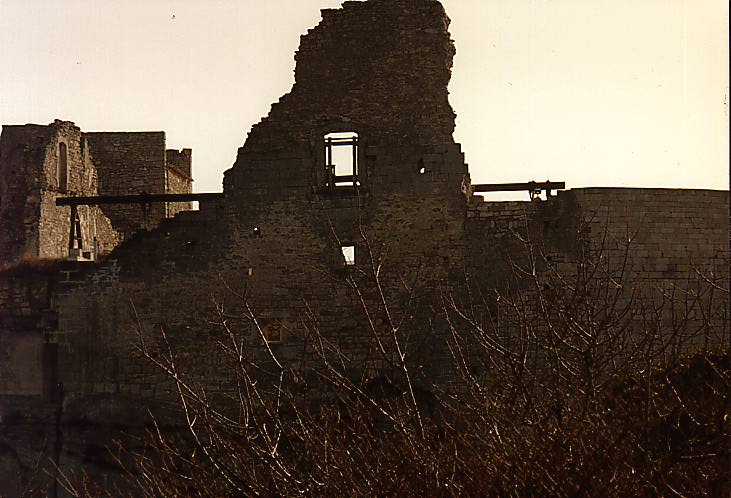 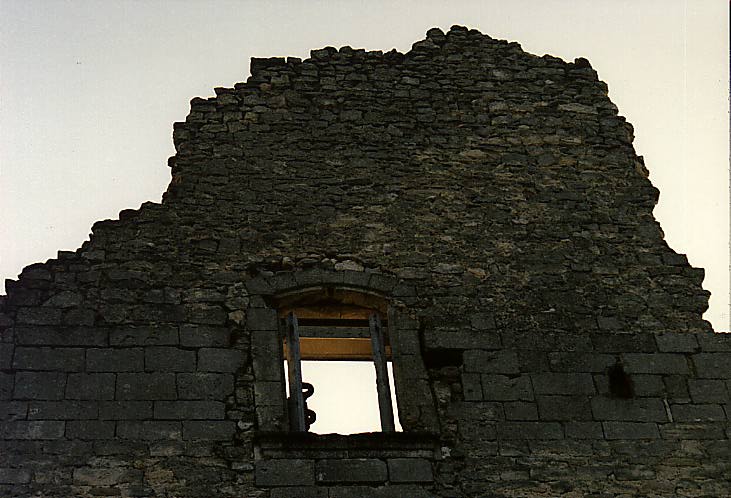 Unveiling of the Marquis de Sade bust and the Festival Lacoste (3:06)
—-

p.s. Hey. ** David Ehrenstein, Indeed. ** Thomas Moronic, Hi, T! Well, naturally, maestro. It’s an amazing book. and if DC’s gave out an award for best book cover, it would also win that in a landslide. I can only, or, I mean can’t imagine how intense the work must be right now. Helping you count off the minutes until you’re on your lonesome and can write. Yes, do plan to come visit the big P and me once this gigantic mess, not mention whatever shit your Brexit adds to the mess, is trailing away. Love, me. ** Sypha, I sadly never had the opportunity to interact with Simon. I was left to admire from afar. Actually, psst, don’t tell John, but yours was greater this year. ** JM, Hi, Josiah. I hope everything is great with you. ** NIT, Hi, NIT! Well, you obviously have some top notch friends. I don’t know the last two, I’ll find them, thanks. You doing good, or, hopefully, even much better than merely good? I sure hope so. ** Bill, Thanks a lot for your list(s), man. There’s a whole bunch I’m not familiar with (yet). And have a happy dawning week. ** Toniok, Hi, Tk! Yeah, being stuck is the worst part maybe. Zooming has its virtues, but everybody being in frames and flat as pancakes is getting very old. And the lack of live is music is starting to feel murderous, and that seems like it will be the very last thing to come back. I’m glad you’re managing to work on projects at least. Me too, and similarly. Take care, buddy. ** _Black_Acrylic, I second you. ** Steve Erickson, Okay, I will check that out as a good laugh sounds awfully good. ** Mark Gluth, Hi, Mark! Yes, I’m extremely grateful that everyone I personally know is surviving and that the ones who got sick were only battered a little. Yes, the scrolling videos, that’s it. Super interesting. And super interesting to try to figure out. Um, I have an idea for a new possible novel thing. It’s still an idea, although I keep thinking about it rather obsessively, so, as I’m sure you know, that’s usually an awfully good sign. We’ll see. But it’s still just thinking and not yet something I’m trying to type. Thanks for asking, bud. All the very, very best. ** Okay. Here’s a quite old post that was long dead until I fixed it up the other day. And, in fact, the controversy covered in it is still raging, strangely enough, even though Cardin has died in the meantime. Curious, no? See you tomorrow.