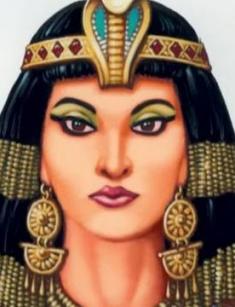 Wiki SEZ — “Cleopatra VII Philopator (Koinē Greek: Κλεοπάτρα Φιλοπάτωρ; 69 BC – 10 August 30 BC) was the last active ruler of the Ptolemaic Kingdom of Egypt. A member of the Ptolemaic dynasty, she was a descendant of its founder Ptolemy I Soter, a Macedonian Greek general and companion of Alexander the Great.[note 6] After the death of Cleopatra, Egypt became a province of the Roman Empire, marking the end of the second to last Hellenistic state and the age that had lasted since the reign of Alexander (336–323 BC). Her native language was Koine Greek, and she was the only Ptolemaic ruler to learn the Egyptian language.

In 58 BC, Cleopatra presumably accompanied her father, Ptolemy XII Auletes, during his exile to Rome after a revolt in Egypt (a Roman client state) allowing his daughter Berenice IV to claim the throne. Berenice was killed in 55 BC when Ptolemy returned to Egypt with Roman military assistance. When he died in 51 BC, the joint reign of Cleopatra and her brother Ptolemy XIII began, but a falling-out between them led to open civil war. After losing the 48 BC Battle of Pharsalus in Greece against his rival Julius Caesar (a Roman dictator and consul) in Caesar’s Civil War, the Roman statesman Pompey fled to Egypt. Pompey had been a political ally of Ptolemy XII, but Ptolemy XIII, at the urging of his court eunuchs, had Pompey ambushed and killed before Caesar arrived and occupied Alexandria. Caesar then attempted to reconcile the rival Ptolemaic siblings, but Ptolemy’s chief adviser, Potheinos, viewed Caesar’s terms as favoring Cleopatra, so his forces besieged her and Caesar at the palace. Shortly after the siege was lifted by reinforcements, Ptolemy XIII died in the 47 BC Battle of the Nile; Cleopatra’s half-sister Arsinoe IV was eventually exiled to Ephesus for her role in carrying out the siege. Caesar declared Cleopatra and her brother Ptolemy XIV joint rulers but maintained a private affair with Cleopatra that produced a son, Caesarion. Cleopatra traveled to Rome as a client queen in 46 and 44 BC, where she stayed at Caesar’s villa. After the assassinations of Caesar and (on her orders) Ptolemy XIV in 44 BC, she named Caesarion co-ruler.

In the Liberators’ civil war of 43–42 BC, Cleopatra sided with the Roman Second Triumvirate formed by Caesar’s grandnephew and heir Octavian, Mark Antony, and Marcus Aemilius Lepidus. After their meeting at Tarsos in 41 BC, the queen had an affair with Antony. He carried out the execution of Arsinoe at her request, and became increasingly reliant on Cleopatra for both funding and military aid during his invasions of the Parthian Empire and the Kingdom of Armenia. The Donations of Alexandria declared their children Alexander Helios, Cleopatra Selene II, and Ptolemy Philadelphus rulers over various erstwhile territories under Antony’s triumviral authority. This event, their marriage, and Antony’s divorce of Octavian’s sister Octavia Minor led to the Final War of the Roman Republic. Octavian engaged in a war of propaganda, forced Antony’s allies in the Roman Senate to flee Rome in 32 BC, and declared war on Cleopatra. After defeating Antony and Cleopatra’s naval fleet at the 31 BC Battle of Actium, Octavian’s forces invaded Egypt in 30 BC and defeated Antony, leading to Antony’s suicide. When Cleopatra learned that Octavian planned to bring her to his Roman triumphal procession, she killed herself by poisoning, contrary to the popular belief that she was bitten by an asp.

Cleopatra’s legacy survives in ancient and modern works of art. Roman historiography and Latin poetry produced a generally critical view of the queen that pervaded later Medieval and Renaissance literature. In the visual arts, her ancient depictions include Roman busts, paintings, and sculptures, cameo carvings and glass, Ptolemaic and Roman coinage, and reliefs. In Renaissance and Baroque art, she was the subject of many works including operas, paintings, poetry, sculptures, and theatrical dramas. She has become a pop culture icon of Egyptomania since the Victorian era, and in modern times, Cleopatra has appeared in the applied and fine arts, burlesque satire, Hollywood films, and brand images for commercial products.”

Cleopatra is first and foremost a cinematic figure.

There have been many Cleopatras.

But the one that counts the most was made in 1963.

Interesting this production began as a project the studio thought could be made cheaply on the backlot.

But then Talot became available.

The whole thing is covered in great detail in  The Cleopatra Papers.
Brodsky and Weiss were hired by Fox when the company feared the film wasn’t getting enough publicity (!!!)

The Cleopatra closest to my heart is Corrine Marchand.

As for the next Cleopatra, the choice is obvious.

p.s. Hey. Today the venerable writer, critic, bon vivant and friend to DC’s all and sundry aka David Ehrenstein gifts us with a multi-media meditation on that sassy slice of history known as Cleopatra. Please give his post your local all, and do speak respectively to David, thank you. And thanks a bunch, Mr. E. ** Misanthrope, Hey. I think there are probably those who’d counter that using sex as a weapon is my work’s and blog’s middle name, but what do they know? Are you feeling even better? The beach is really nice at night. That’s kind of the only time I like it. Or in the winter. Or when there’s a tsunami a short ways offshore. Otherwise, I’m sure you’ll find something about it to like. Or at least about certain guys walking or lying upon it. ** Dominick, D!!!! Thanks about the post. Me too, about his always thinking. I just wish he had a pen and paper or keyboard or something there more often when he did. I’ve always thought a really good name for a coaster would be ‘I’m going to kill you’. The low temperature passion of Emos is one of life’s most unfairly overlooked tourist destinations. Or something. Your love was evil! I haven’t heard ‘Pass the Dutchie’ in decades, but now that you mention it … oh no! Don’t worry, I’ll scrub it out of my brain somehow. (I had the horrible song ‘Owner of a Lonely Heart’ stuck in my head for about four days recently, but forget I ever mentioned it.) Love like a magic washing machine that turns clean clothes into filthy, stinky ones, G. ** Tosh Berman, A fellow Devoto fan, I’m not at all surprised. Fist bump. I agree with you, hands down. Hm, interesting about the Human Hands comparison. I’ll pull out their stuff and reconsider. Most of all, I’m happy to have helped to banish your gloom, sir. ** Bill, Hi. I love your new piece. It’s great. So rich and tight but so expansive. I’m going to study it for linguistic equivalents. Thank you! Yep, about Devoto, I’m so there. Ha ha, and Purdy wondered and kvetched about why wasn’t as successful as his more demure peers. God love him. ** _Black_Acrylic, Hi. Yes, thank you KillSwitch, whoever and wherever you are. Really great news about you being accepted for that new treatment! When do you start? Does it involve just taking a pill? ** Steve Erickson, Oh, ha ha, those are your guesses? Yawn about that discussion you mentioned. But yeah. Hope you feel a lot better upon awakening today. I listened to a couple of tracks on the new Eilish and was not very into it, but I intend to try again and maybe harder. ** Brian, Hi, Brian. I’m not huge on Jodorowsky. I mostly enjoy how labor intensive and wacked his films’ set pieces are. But his films are pretty hippie-dippy. Which can be charming in moderate doses. ‘El Topo’ is the darkest, strangest one. Made before he decided he was a seer and transmitter of profound cosmic wisdom and all of that. Good news, and continued well wishes, about your stoned, improving pooch. I don’t think ‘Eyes Wide Shut’ is a masterpiece, although I think it might’ve been if he’d been alive to edit it, but I don’t see how one could hate it. Sedate: good characterisation of what I think is causing my thus far meh feeling about the new Eilish. Time will tell, and we’ll see, right? Reality is starting to seem so present it feels kind of minty. Conquer today, my friend. ** Right. You know what you’ve got in store today already, so please have at it if you haven’t already. Thank you, folks. See you tomorrow.