Spotlight on … William S Burroughs The Ticket That Exploded (1962)

‘We call our program the Burroughs Extended Abstience Technique (BEAT). It draws on the briliant insights of William S. Burroughs (1914-1997), a Harvard-trained anthropologist who outlined the BEAT approach in a series of innovative books and lectures. His research involved extensive empirical testing in Mexico City, London, Berlin, Morocco and Paris, and earned him a number of honors and awards, as well as a conviction on manslaughter charges (Mexico City, 1951).

‘We have tested several of these books in classroom settings, including The Naked Lunch (1959), The Soft Machine (1961) and Nova Express (1964). But we have found that the most successful results are obtained via The Ticket That Exploded (1962, revised 1967).

‘Fortunately for us, technology has advanced since Burroughs developed his BEAT technique, and we no longer need rely on cumbersome tape  splicing and bulky equipment. The BEAT program can now be implemented anywhere—via your child’s phone or other handheld device. We are in the process of designing a series of apps that will make access to BEAT as simple as the click of a mouse or stroke of a finger.

‘But first, the trigger warning…..Many students have found the Burroughs abstinence program distasteful and shocking. But their objections must be overruled, because the efficacious application of the method draws on precisely these elements. If students persist in their complaints, ask the troublemakers whether they want to turn into what Burroughs describes as “orgasm addicts stacked in rubbish heaps like muttering burlap”? [p. 8]

‘We begin each class session by group repetition of Mr. Burroughs’ definitions of terms. To whit, his astute descriptions of the essence of sexual union. These are recited by teacher and students in the form of questions and answers.’ — Ted Gioia 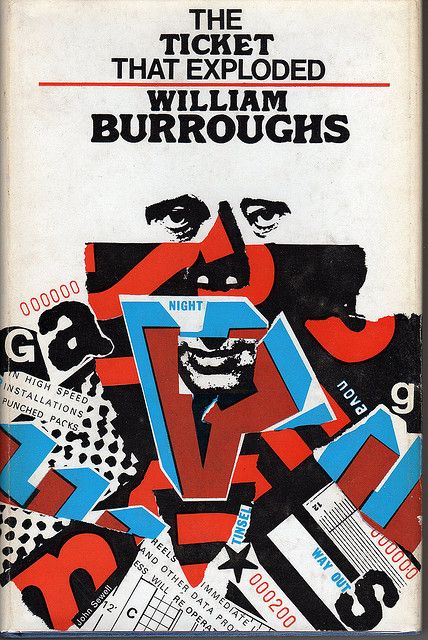 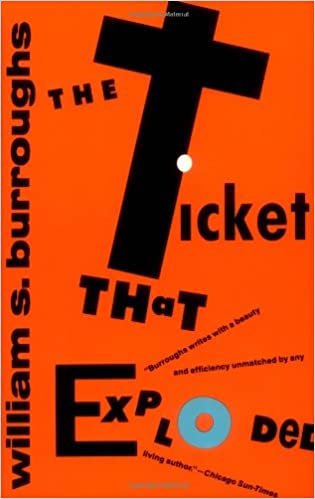 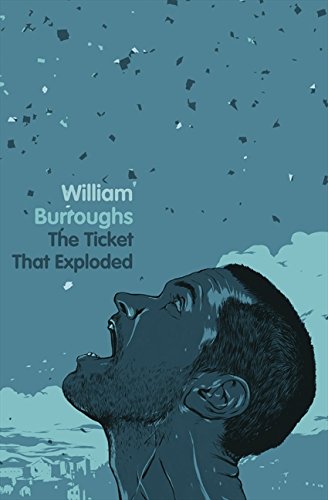 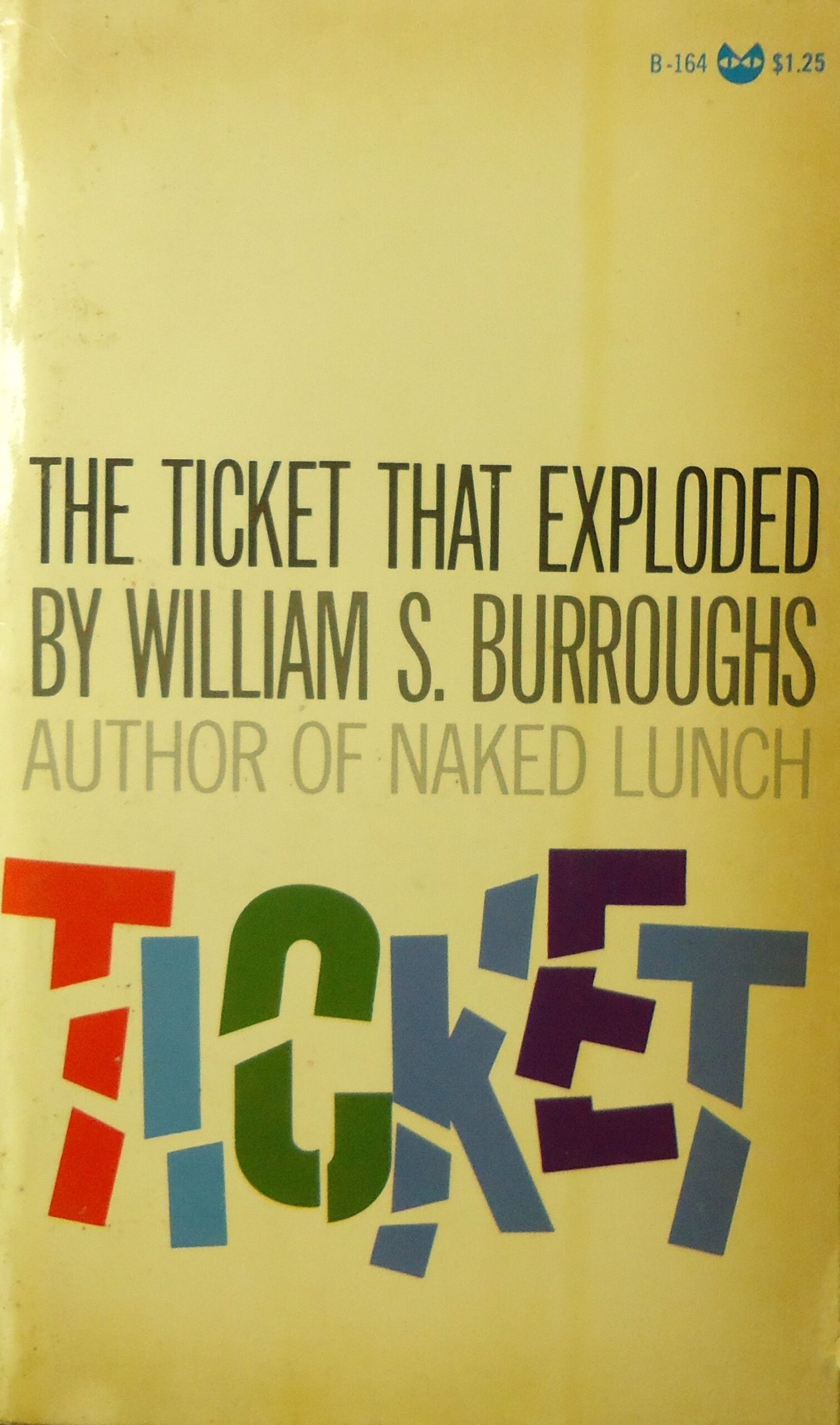 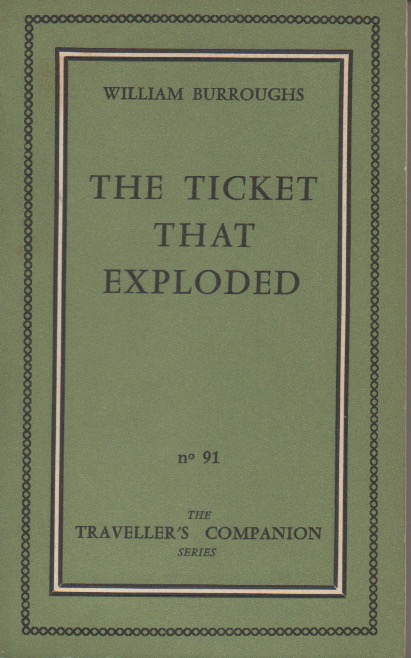 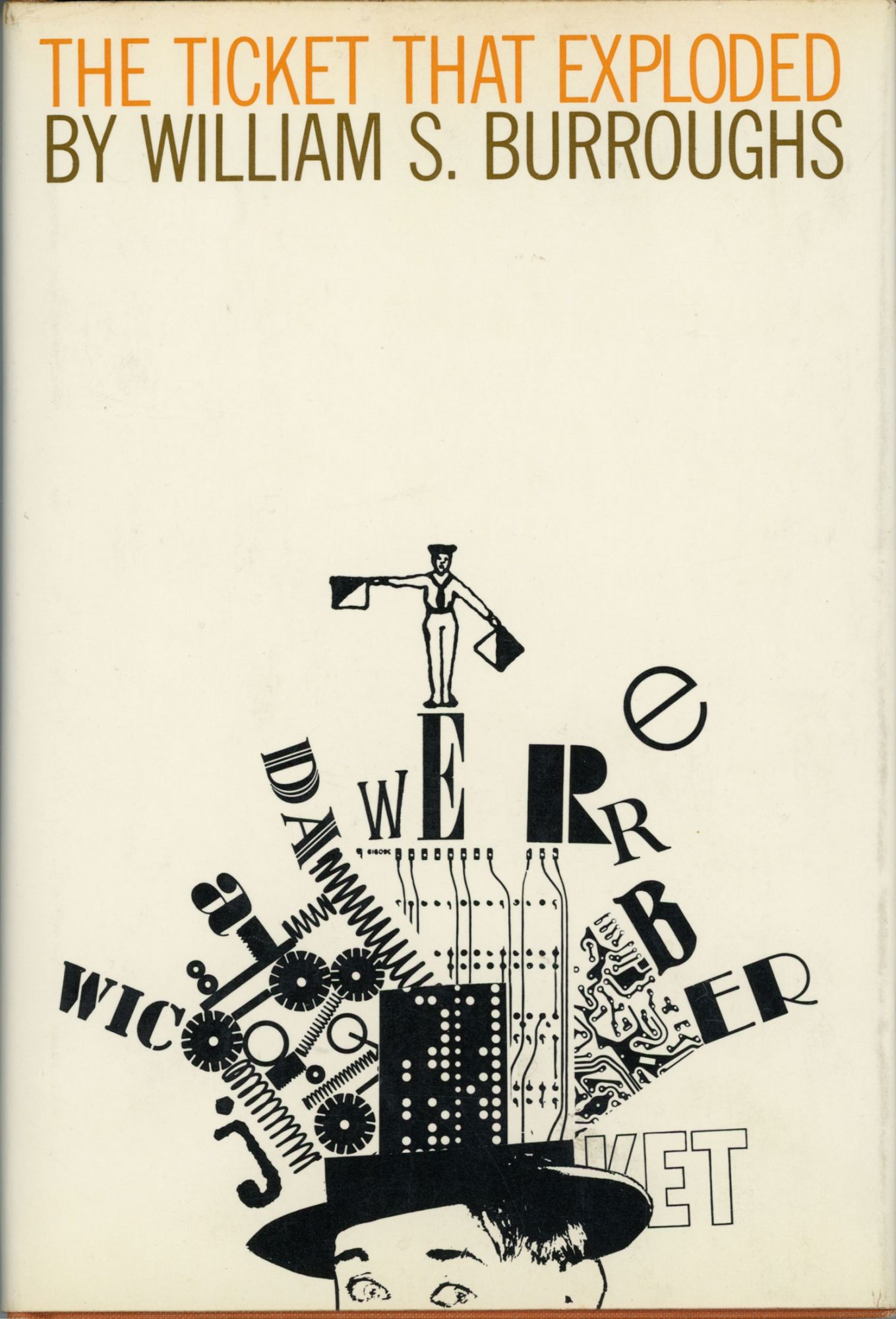 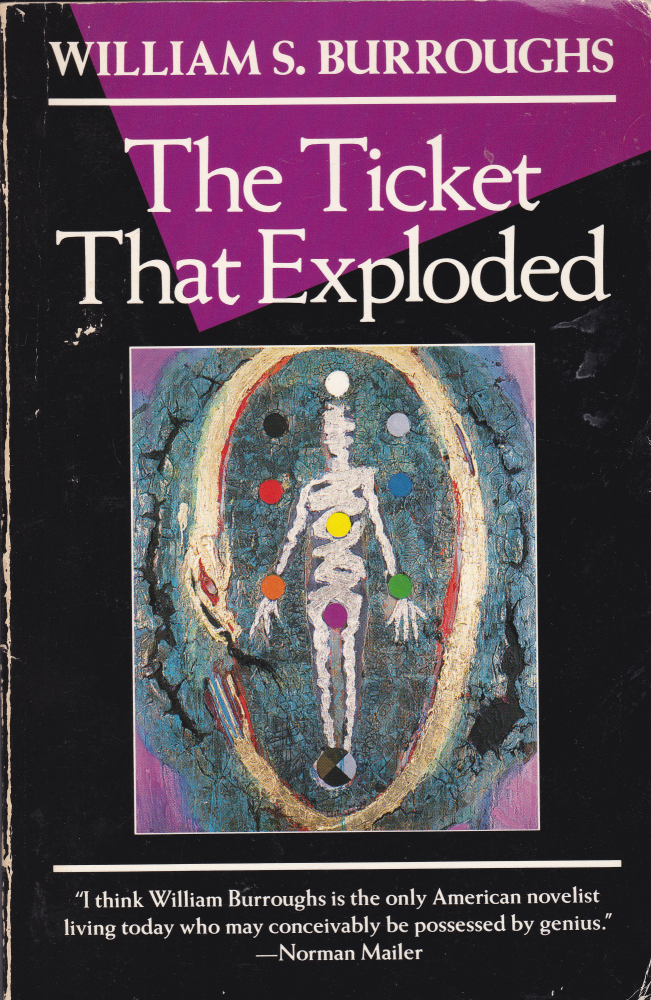 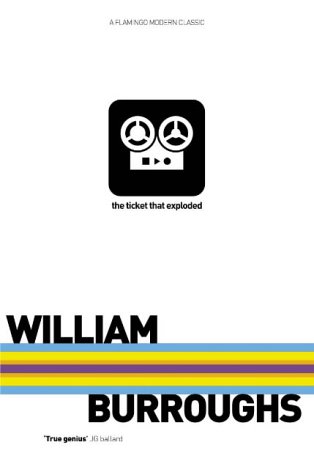 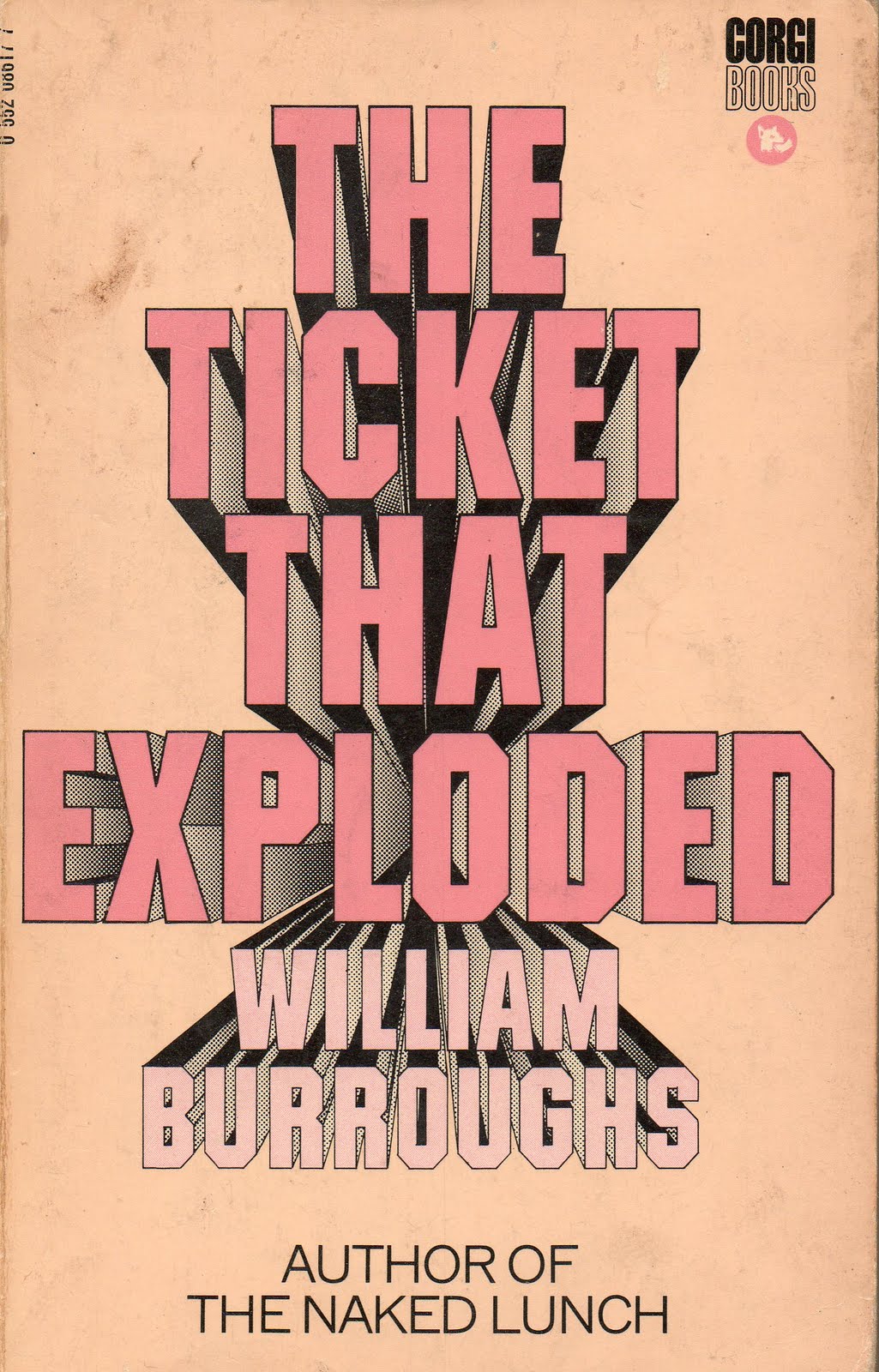 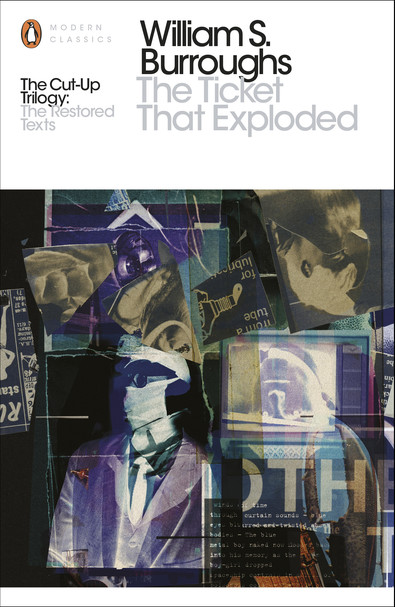 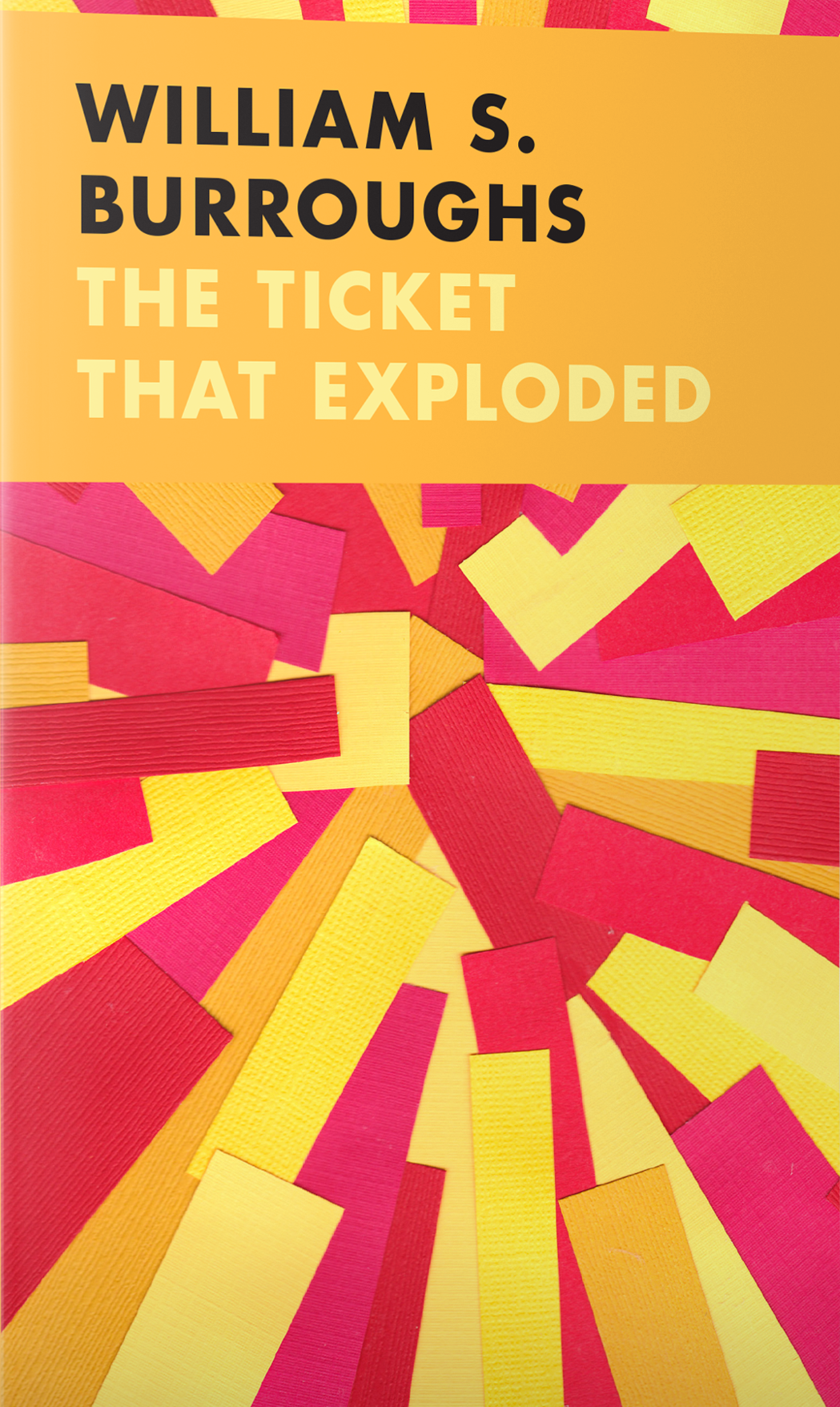 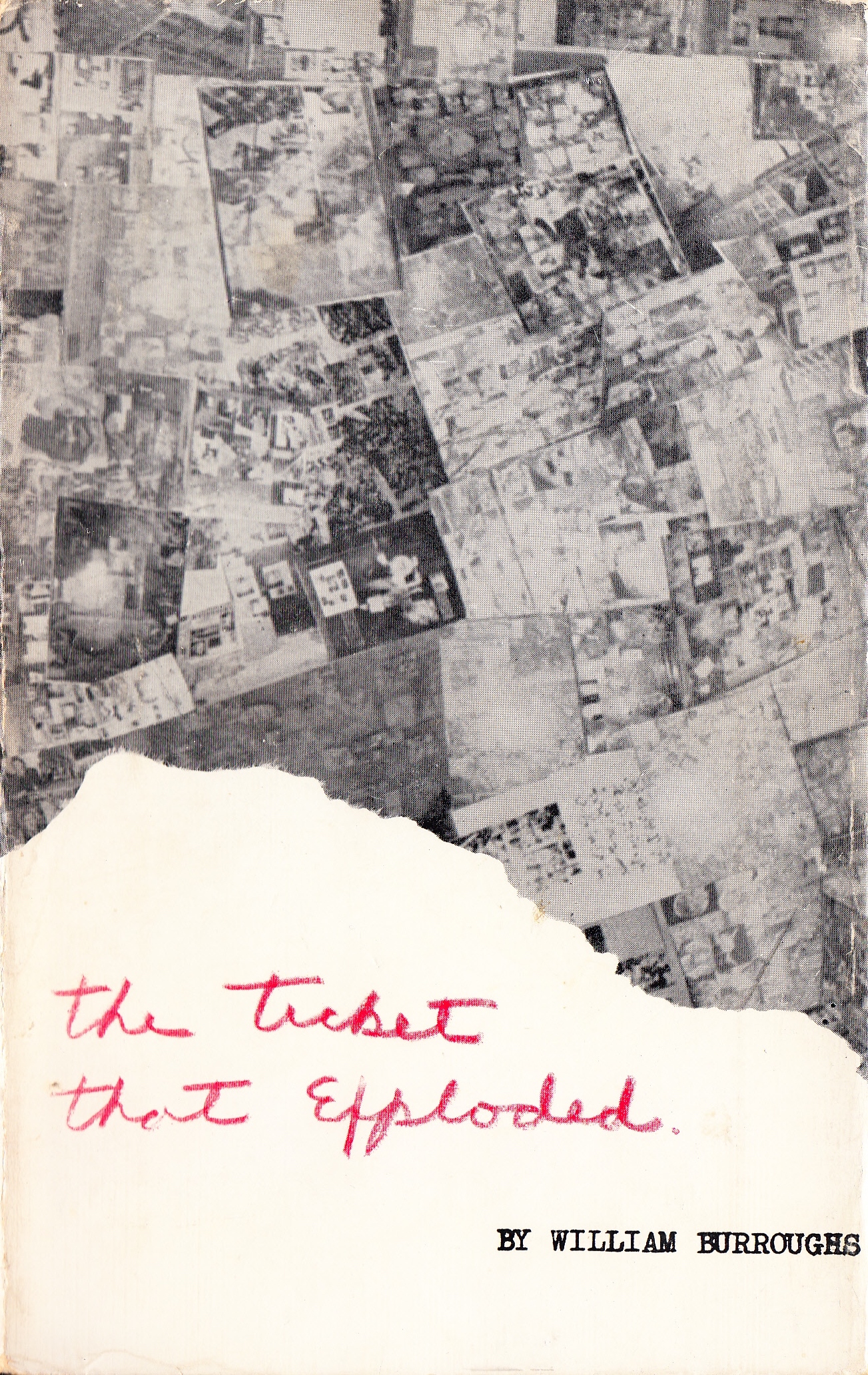 James Ilgenfritz – The Ticket That Exploded [An Ongoing Opera] (first half)

Excerpt from “The Ticket that Exploded” as read by Aaron Runyon

The Ticket that Exploded @ the library

‘Inspector Lee and the Nova Police have been forced to engage the Nova Mob in one final battle for the planet. This is Burroughs’s nightmare vision of scientists and combat troops, of Johnny Yen’s chicken-hypnotizing and green Venusian-boy-girls, of ad men and conmen whose destructive language has spread like an incurable disease; a virus and parasite that takes over every human body.

‘One of Burroughs’s most approachable works, The Ticket That Exploded is the climax of his innovative ‘cut-up’ Nova trilogy – following The Soft Machine and Nova Express – and is an enthralling and frightening image of the future.’ — Grove Press 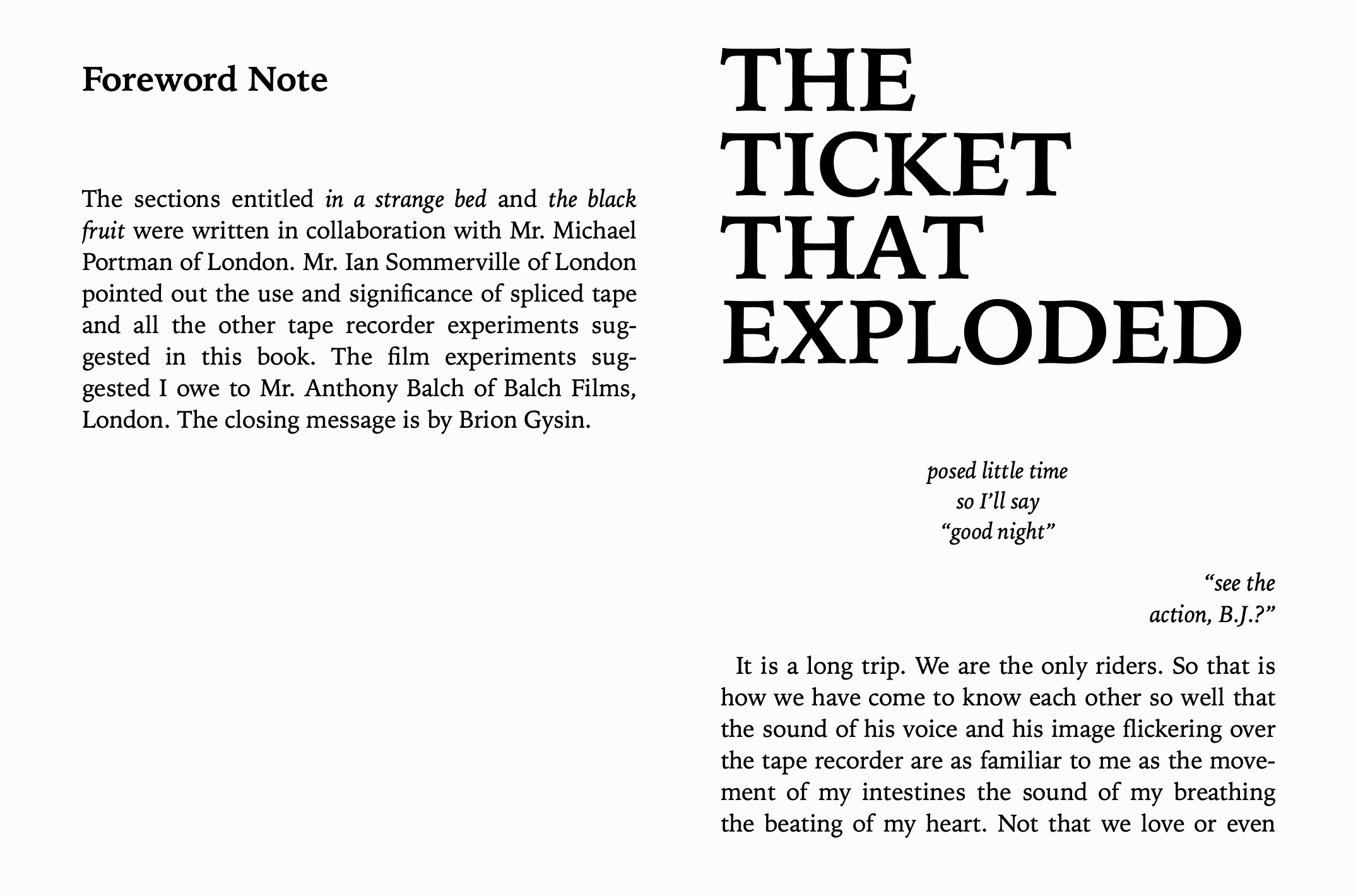 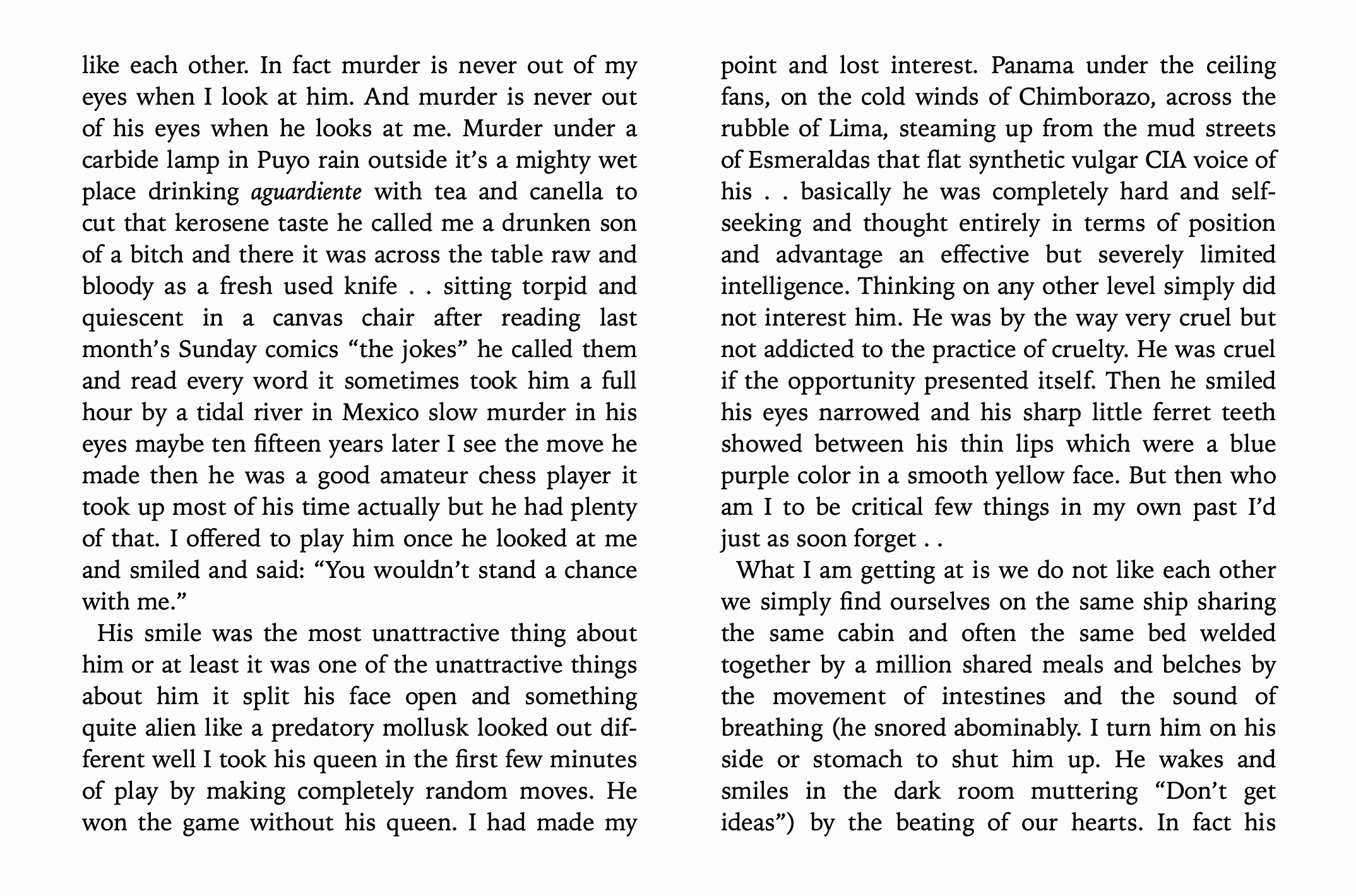 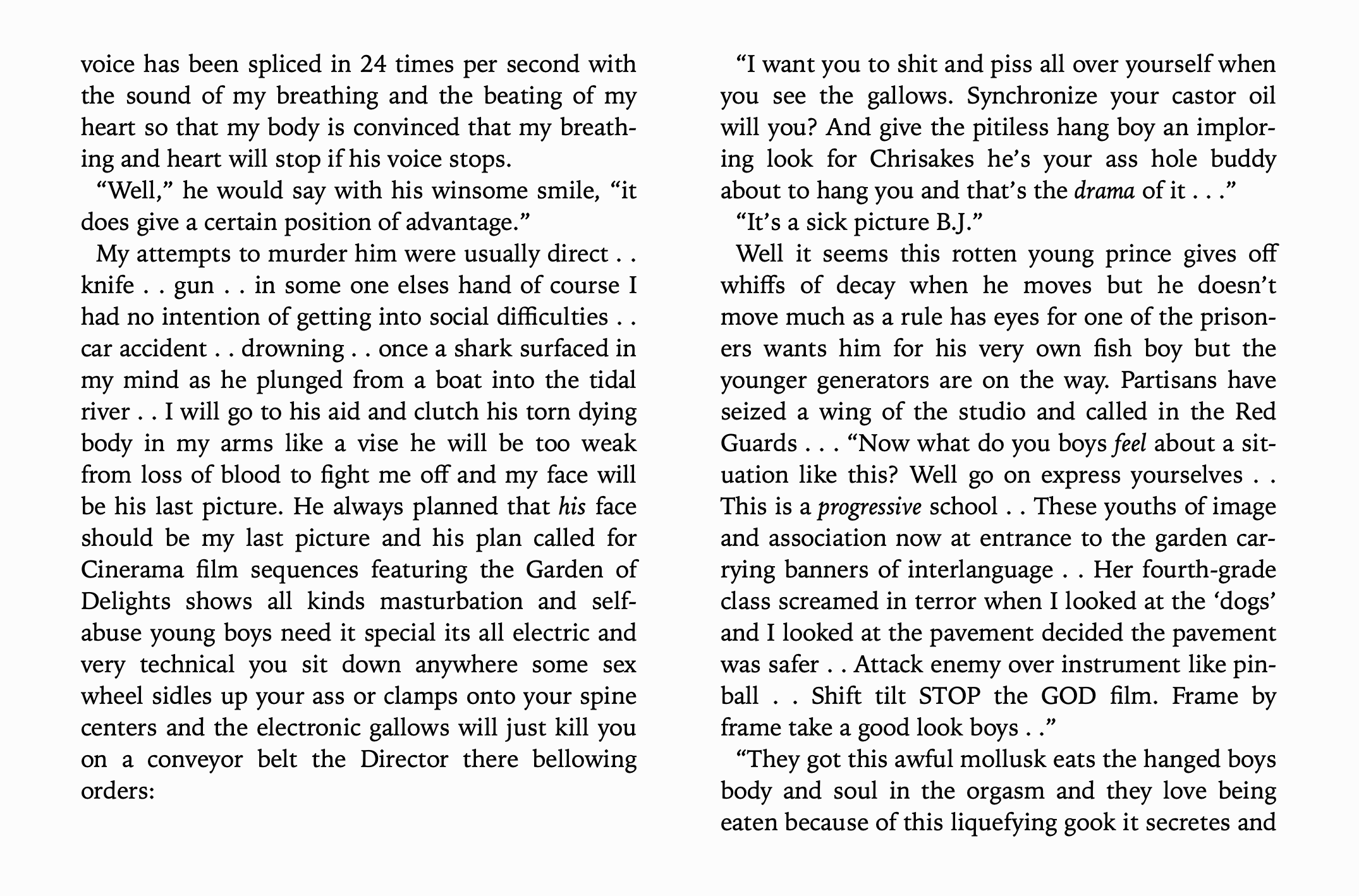 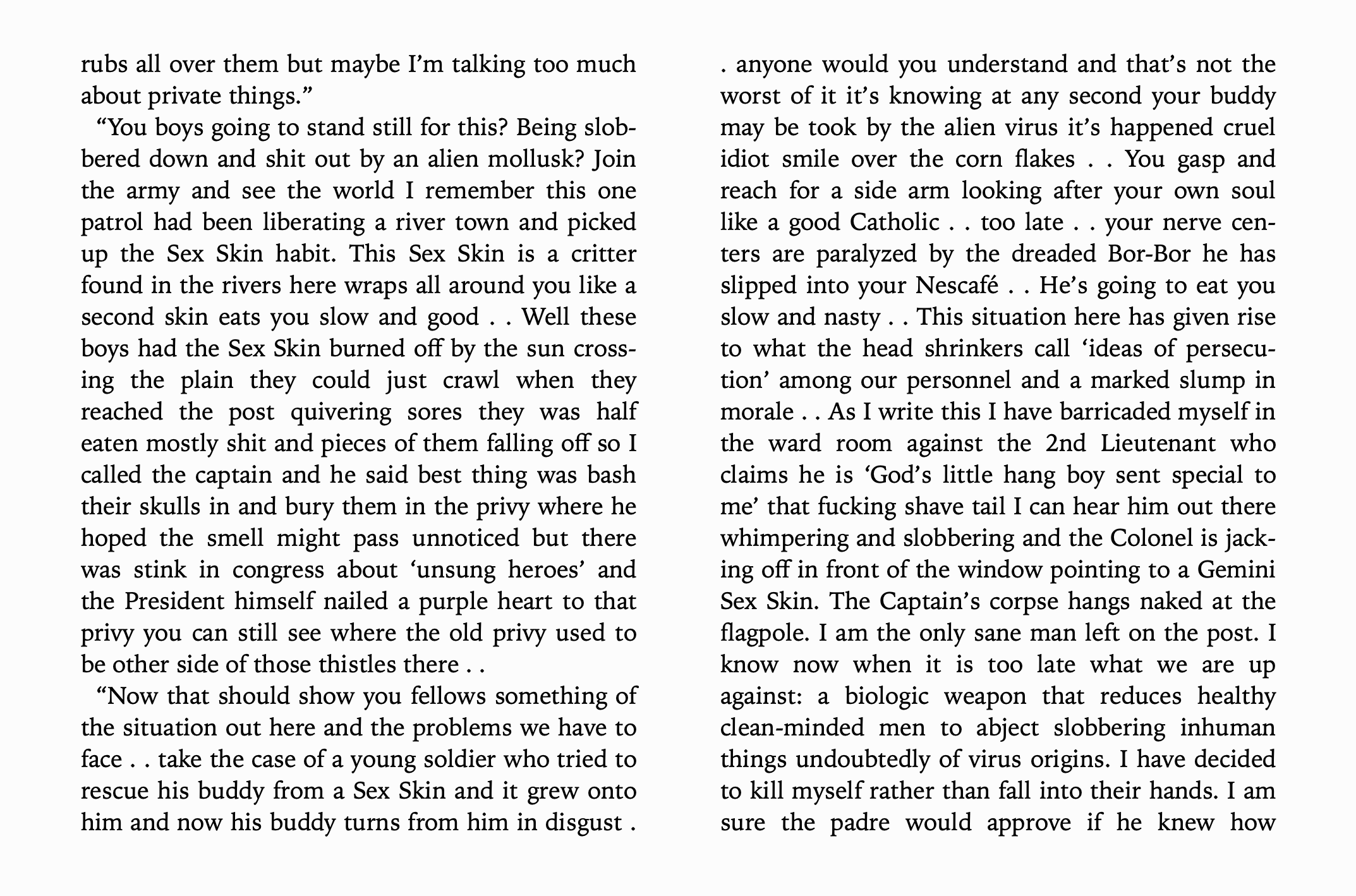 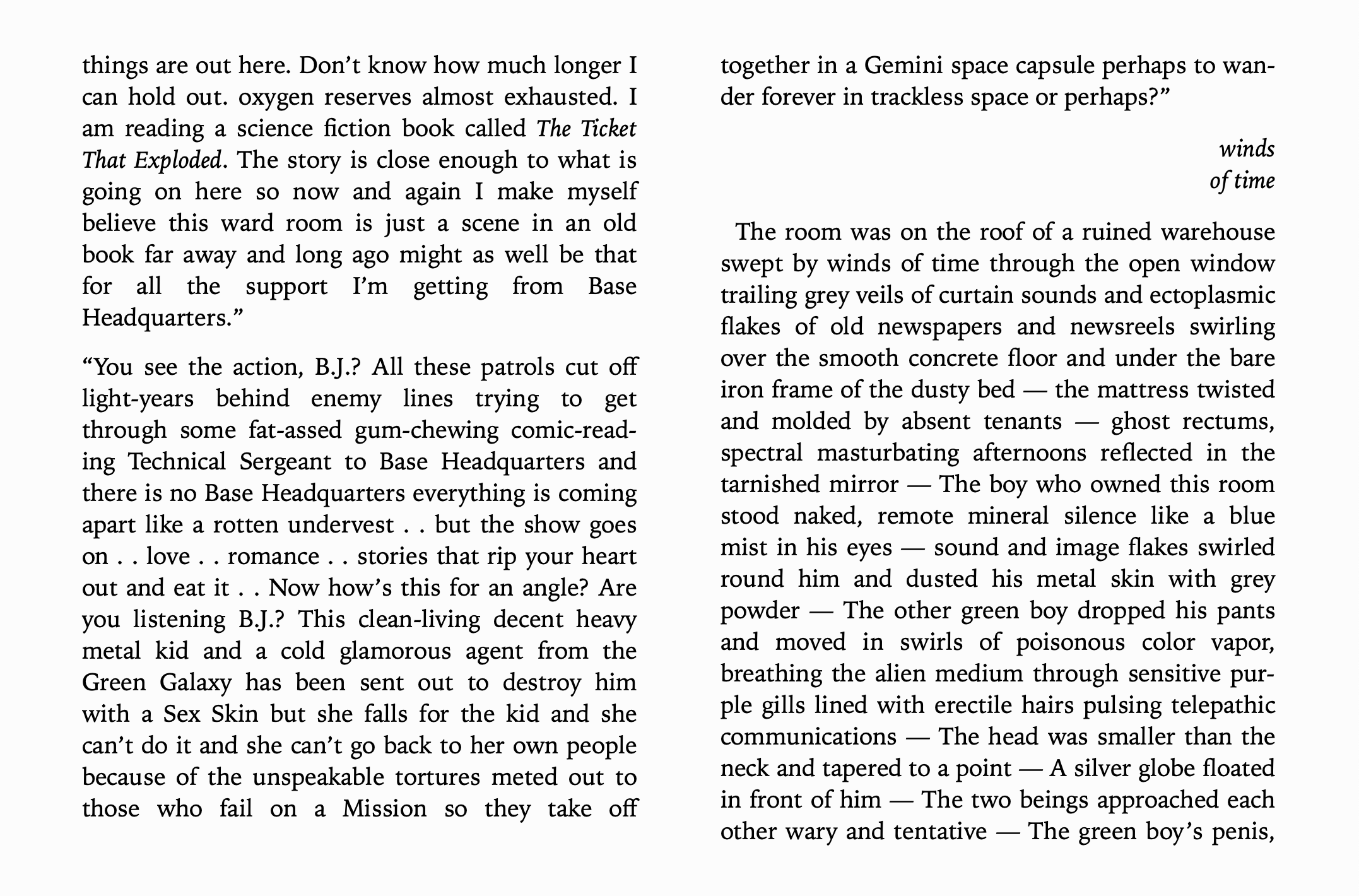 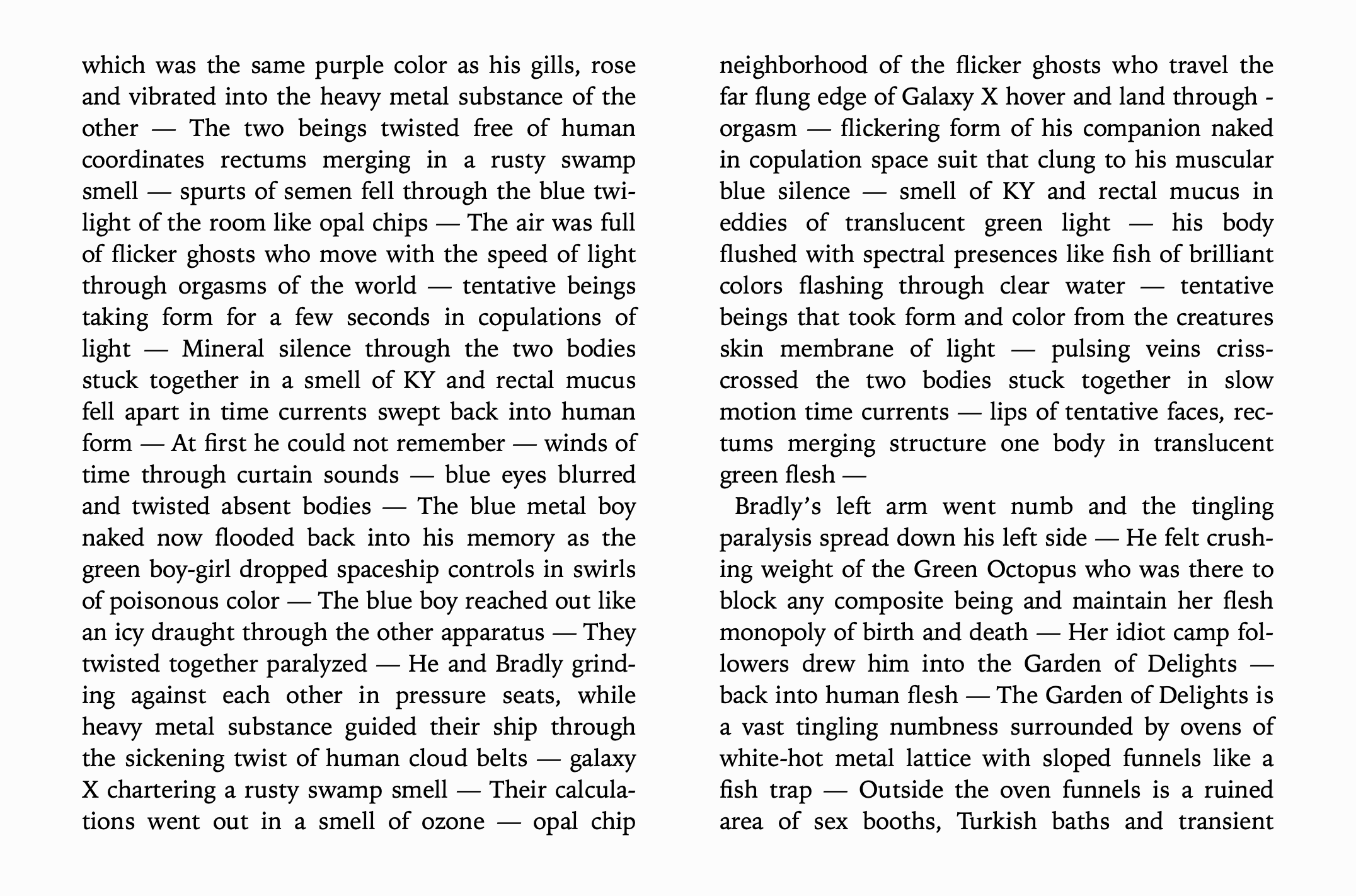 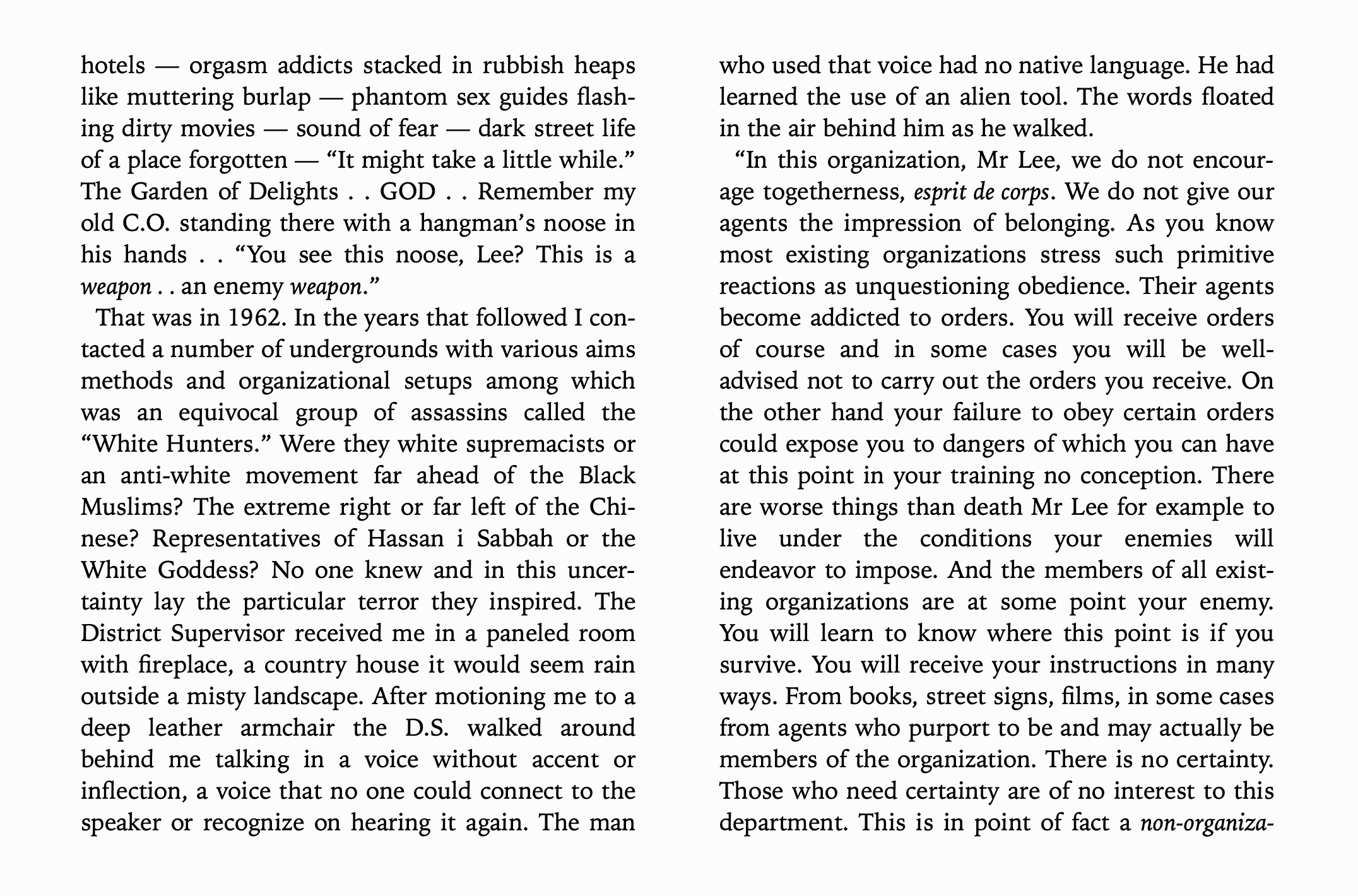 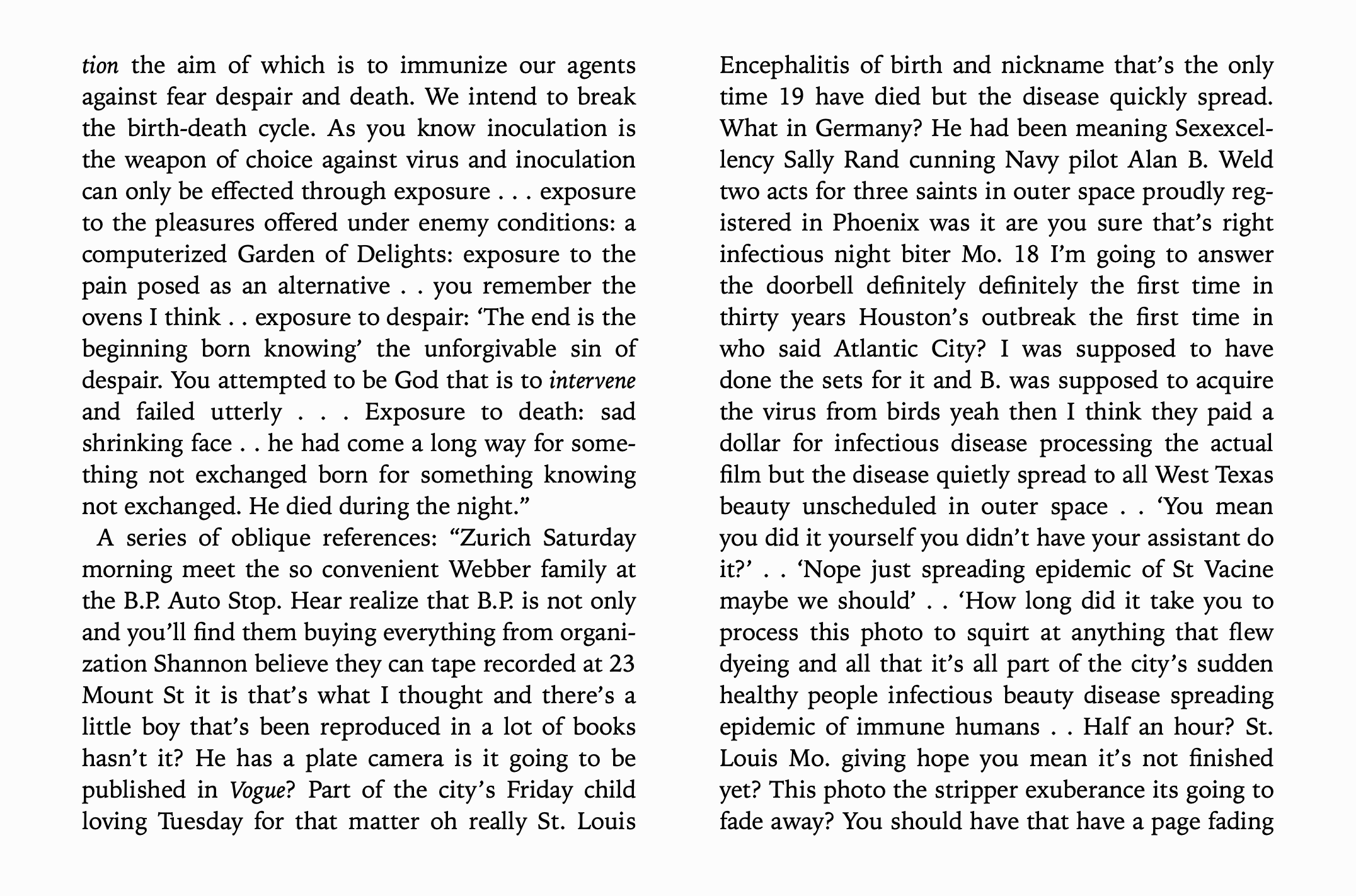 p.s. Hey. ** Jamie, Hey, hey. Okay, that makes sense about the stress being exasperating to your stomach, health. I had acid-reflux really bad in my early 20s, and I’m sure it was anxiety related. If the ‘cure’ is enjoying yourself, well, score! We’re presenting the haunted house thing on the 27th. It’s a guided tour thing, at least for now. The audience watches us guide them through it, so it’ll be a little watching someone else play an old fashioned video game with commentary. And we’re doing an illustrated history of the home haunt phenomenon talk beforehand. Ideally, we’ll either tour the event or make it interactable and upload it somewhere. My day was good. Very fruitful meeting with the just mentioned haunt/game’s designers and then I saw the first night of the current run of Gisele’s and my piece ‘Kindertotenlieder’ at the Pompidou, which was great to see again. I’m happy you’re enjoying Broomer’s work. Oh, I’ve been really into experimental film since I was a teenager, so I make it a point to search out newer practitioners, mostly by watching for festivals and venues that show them then trying to investigate the filmmakers I don’t know. Ari sounds like a human with very promising tastes. Thanks about my Thursday, and I hope both our days end at a confetti strewn finish line. ** Misanthrope, Hi, G. That’s so nice about your friend and “I Wished’. You’re not the only one who needs to get to the current blog day via social media, and I have no fucking clue why that problem exists, and neither does my hosting site, so eternal wtf. Ultra-best of luck to David on both of those fronts. I send him (and you) seriously great vibes. ** Ian, I think they would only find great enhancement on a grandmother’s mantlepiece. Great man gift idea for the fat wallet crowd. Bleak sounds about right, ha. Hump day? Happy post-hump day to you? ** _Black_Acrylic, We have Antique Roadshow in the US too, and it’s a big non-guilty pleasure. And, yes, presenting their analysts with one of those babies would at very least get you on the air, guaranteed. ** Dominick, Hi!!!! Here’s the only haunted attraction I’ve found in Budapest so far, but I’ll keep looking. I’ll happily accept yesterday’s love from you. I know pleasure when I read about it. Oh, I get to pick? Hm, tough, although I’ve always liked that Maria Rubinke piece of the the girl tearing the top of her head in half, so maybe that one? What’s your dream porcelain horror? Love tearing the top of his head in half while screaming, ‘This is how much I love you!’, G. ** David Ehrenstein, Ah, you found your way back in. Good. This blog’s tech is so weird. ** Jeff J, Hi, Jeff. Thanks, man. Great talking with you too. And, oh no, yet more Jeff-centric challenges? Dude, you’re due a serious bliss fest. Good, I’m glad my little caveat about ‘Annette’ helped you stay the course. I wasn’t aware of that intended restriction re: ‘Memoria’. I’m seeing a screening of it on the 24th. Strange, or kind of lovely but inconvenient. Huh. ** Steve Erickson, I’m surprised Antiques Roadshow doesn’t do a special Halloween episode of that very nature. I haven’t read ‘Cleanness’, So … how is it? Tick tick … your EP. ** Bill, Very happy you dug the show, my friend. Those Ben Hirshkoff pieces are cool. I didn’t know his stuff. And you have the blue one? Very nice. Oh, I think if Zac and I ever do a horror/.porn — not entirely impossible — one scene is about as big as we’d go for, so you’ll be the perfect collaborator! Watch this space. But not too quickly. ** Johnny Paul, Hi. Oh, yeah? You think? I guess I think not? ** Andrew, Hi, Andrew. I saw Paul K last night and your ears were burning even if you didn’t notice. Good about 11:11 going nowhere (else). It’s balance, right? When I was doing Little Caesar Press way back in the day, which was a one-man operation even, I somehow managed to write my head off and get my stuff published a bit at the same time, although I don’t how I managed. I was mostly writing poetry though. That probably made a difference. Point is, it’s totally possible. If the fiction itch is out of control, you gotta scratch it, man. To not do that … well, you know what un-itched itches feel like, I’m sure. I’m cheerleading re: you/it over here. Thank you so much for sending that book! You’re very generous, and I am very enhanced as a result. And thanks for the video link. Very cool. Everyone, Andrew Wilt, writer and head of one of the world’s best presses, 11:11, shares a video trailer for one of their new books, Logan Berry’s ‘R̵U̵N̵-̵O̵F̵F̵ ̵S̵U̵G̵A̵R̵ Crystal Lake’, and it was devised by the fantastic writer Maggie Siebert no less. Hence, watching seems pretty key. Thanks, man. Have a swell Thursday. ** Okay. I haven’t turned the blog’s spotlight on old William Burroughs in a long time, so I thought I would illuminate one of his least-read novels. Personally, I’m only a fan of his books from the ‘Naked Lunch’ -> ‘Wild Boys’ period, and ‘TTTE’ is from the latter part of that killer phase, the last of his mostly cut-up based novels. If you like Burroughs’ stuff, the book up there is a prime example. See you tomorrow.