‘It’s hard to describe the experience of a work by Ryoji Ikeda. The Japanese artist has worked as an experimental musician, performer, researcher, and art-maker, and he brings it all together for immense, immersive installations that fill the senses. But while the word “immersive” has come to connote Instagram bait, Ikeda’s works are anything but lowbrow.

‘The experience of a Ryoji Ikeda work is both brainy and very visceral, intellectual and awe-inspiring.With a background in experimental sound, Ikeda puts you in touch with sonic experiences that your body probably hasn’t had to process before. With an interest in science and mathematics, his visuals often draw on huge data sets, giving you vast walls of data flickering at you faster than you can process, as if tracing the sense of a collective intelligence trying to sync up with the universe.

‘Reviewing a show of his work in New York some years ago, Artnet News critic Ben Davis once called it a kind of “cosmic minimalism.”’ — Naomi Rea

‘Leading Japanese electronic composer/artist, Ryoji Ikeda, focuses on the minutiae of ultrasonics, frequencies and the essential characteristics of sound itself. His work exploits sound’s physical property, its causality with human perception and mathematical dianoia as music, time and space. He has been hailed by critics as one of the most radical and innovative contemporary composers for his live performances, sound installations and album releases. Using computer and digital technology to the utmost limit, Ikeda has been developing particular “microscopic” methods for sound engineering and composition. Since 1995 he has been intensely active in sound art through concerts, installations and recordings.

‘His ongoing body of work, datamatics, is a long-term programme of moving image, sculptural, sound and new media works that use data as their theme and material to explore the ways in which abstracted views of reality – data – are used to encode, understand and control the world.’ — transmediale 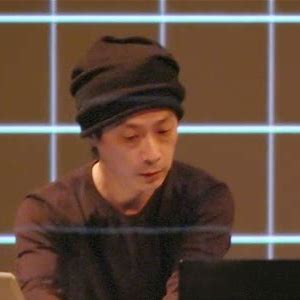 How do you see music changing?

Ryoji Ikeda: We know that we can’t concretely predict how music will be in the future, but everybody knows that music will definitely change. Of course, this is not only about music changing, this is about everything changing. It seems to be obvious that the form, style and way of representation will be endlessly transformed by technological trends, which has long been a tradition within music — from the invention of notation, or instruments such as the pianoforte, to digital downloads today. But I am more interested in thinking about what will not change — I naively believe that the essentials of music will never change.

RI: As long as capitalism continues, entertainment will always be driven by the stock exchange. Aside from such dry thoughts, I like to believe that popular entertainment genres will always have a mutant or alternative form, such as art films in the movie industry — that any genre always keeps its “Art,” that which raises questions and encourages deeper considerations about the genre itself.

Who were your original inspirations?

RI: Most of the mathematicians in our modern history, especially Leibnitz, Cantor, Godel, Grothendieck.

RI: The process happens in a trial-and-error and a back-and-forth way. It’s an adventure between the hands and the brain that is both systematic and intuitive, and cannot be generalized. For example, first I make different cookbooks for each project or work — the score or “idea” making. I then follow this plan, preparing all recipes carefully — the production process — and then every single element is judged intuitively by the chef at the very moment when he starts to cook — the live performance or installation of an exhibition. I think this is quite normal for any artist.

What are the most important recent technological advances for what you do?

RI: Many interesting things have happened in the last decade, especially in the development of multitask platform technology for computers, which enables anyone to program their own software. This is a breakthrough for me, since programming requires us to learn very sophisticated computer languages. I myself don’t do programming, but to see a new way of thinking among a generation is interesting — as if to witness a major new wave or trend like with DJ kids a decade ago. To me, a drastic shift in people’s way of thinking like this is always more exciting than its trigger.

What are your expectations for the next generation of digital artists?

RI: When young programmers grow up and become mature, I believe they get very close to a border between pure math and what they are doing. In the age of (the Greek philosopher) Plato, music was a science (and part of math), and some of the genuine programmers may well come to accept this great concept in the future, even if they are not conscious of what they are doing for art. And then, at some stage, perhaps the music industry will disappear.

p.s. Hey. ** Jim Pedersen, Jim! How utterly lovely to have you here! Yes, Tony Tasset, so good, I saw so much wonderful work by him at Feature. How are you? I hope you’re doing great and are totally evading the airborne ugh. Love, me. ** David, Nah, no interest in the pet thing. Don’t understand that urge. I do let little spiders who show up in my apartment live full lives, if that counts. My dog pets of my childhood/youth: fatally hit by cars (2), died of cancer, shot by a man down the street, put down for biting a friend, put down because it developed an agonising skin disease. Enough was enough. You had me going there for a minute. ** Dominik, Hi!!! Well, in this case, our producer offered to produce our film. Told us he had absolute confidence he could raise the funds very easily. Had innovative ideas of how to distribute the film. Based on our knowledge of him, all of that seemed totally plausible. So we agreed and counted on him and ceased all other efforts to get the film made for going on two years now. And now we’re stuck, and now we’re at/past the point when he promised to give us the green light to start preparing the shoot the film, and he’s being ominously evasive and weird. Which is why we’ve been forced to figure out a workable Plan B. That’s the scoop. No, I didn’t end up seeing ‘Crowd’. I had a bunch of work to do. But I hear it went great. I think you’re right about non-Fat Joe. Oh, cool, Anita’s there for a bit. A great Xmas present! It’s true that that snowman carrier is both utterly ridiculous and decadent and yet, damn, I would want one. So thank you! Love teleporting you the surviving portion of the quite delicious Buche de Noel that my pals and I partly devoured last night, G. ** David Ehrenstein, Thanks for the festive tune. Ah, okay, I know who he is, I just hadn’t paid enough attention to know his name. Gotcha. ** Misanthrope, Hideous? That’s a first. Interesting. Cool about the Annapolis-related satisfaction. More fodder for the trailer for the next episode of the viral-hit-waiting-to-happen Wines Family reality show. You’re a purposeful guy if there ever was one. ** Steve Erickson, Hi. Yeah, it’s closure city over there where you are, to believe the newscasts. We’re still at the wait and see point. The general thought/hope is that because we have our Presidential election in April, wherein Macron is not exactly a shoo-in, he will do everything possible not to do something that would further lessen his popularity, i.e. a lockdown. We’ll see. ** Brian, Hey, Brian. I so agree! As the weekend’s post attested. Glad you see my rationale about blockbusters on a plane. What’s interesting is when one of them actually seems good in that context. Like I’m sure ‘Aquaman’ wasn’t good, but it strangely seemed good to me all scrunched up on a little screen on a plane. Odd that. I should write an essay about that, or, since I don’t want to write essays anymore, someone should. A friend of mine with generally impeccable tastes has recently been urging me to try Tarkovsky again, so I’ve been meaning to. Especially his last one, whatever it’s called, I forget. ‘Ludwig’, right? It’s so good they released the full length version. I saw it in a theater when it came out, but, as I’m sure you know, the released version was a chopped up, 90 minute edit, and it wasn’t bad by any means, but it was mostly just kind of a curious mess. Your brother likes ‘Frisk’? Wow, that’s trippy. Well, I don’t know your brother, obviously, but that’s cool, I guess I mean to say. My weekend was more work-y than I’d planned because I need to finish this monologue for the next Gisele Vienne piece, so I concentrated on that, but then some close friends and I gathered to eat a delicious Buche de Noel and drink champagne last night, and that was a treat. So it was all right. Do you have bunch of Xmas shopping to do this week? Luckily my friends and I don’t really do the gift thing, and my family’s too way far away to have to worry about that. So I get have a pure Xmas build-up week, whatever that means. Have a swell start to yours! ** Okay. Here’s an old post about Ryoji Ikeda from my murdered blog. It’s a little out of date, of course, but hopefully it’s still of use. See you tomorrow.