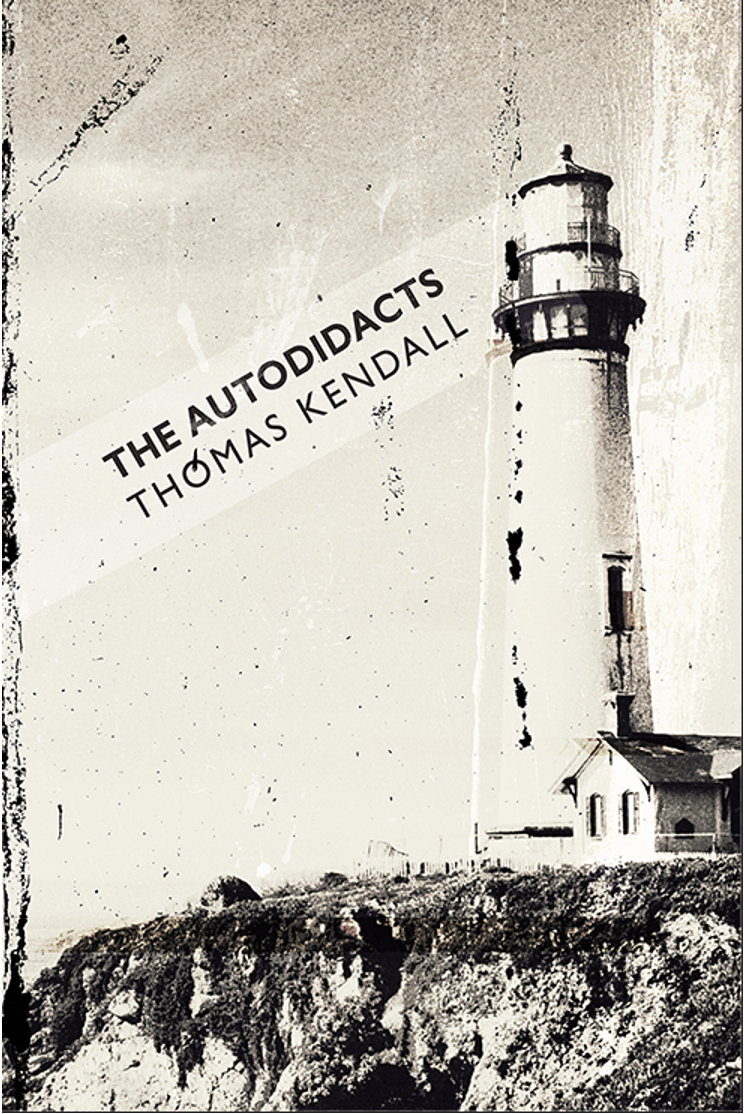 A man mysteriously disappears in a lighthouse, as if dissolved by light, leaving behind a notebook filled with bizarre claims of a curse and a series of drawings entitled ‘The Death of the Jubilant Child.’ The investigation into the disappearance unearths hidden connections between the disappeared man, Helene and the strange figure of the Man With The Forks In His Fingers. Fifteen years later, the discovery of the detective’s copy of the notebook by Helene’s daughter seems to set in motion a repetition of the events of the past.

Circuitously structured and intensely lyrical, The Autodidacts explores the mythos of friendship, the necessity of failure, the duty of imagination, and the dreams of working class lives demanding to be beautiful. It is a prayer in denial of its heresy, a metafictional-roman-a-clef trying to maintain its concealment, and an attempt to love that shows its workings out in the margins of its construction.

Trans Am – Sad and Young

Arthur Russel – Arm around you.

Here comes a regular – The replacements

The Mountain Goats – Ezekial 7 and the permanent efficacy of grace.

As I Lay Dying – William Faulkner

I instantly loved how this heightened and unhinged and completely impossible language was given to these characters who would most likely be represented as completely impoverished if written by some bourgeois social ‘realist.’I found that idea so beautiful. It was rawer too than any British iteration of modernism.

When I read this as a kid it felt like it exploded what language could be.

The Book of Lies – Agota Kristoff

Maybe my favourite all time work. I can’t even really explain it.

I always think about Guide in parallel to Try since it marks a kind of interlocking transition from the emotional/analytic to analytic/emotional in the cycle’s structure. The way Guide backgrounds the emotional in order to show how emotion informs and underpins the analytical, the different ways the structure of the text works with emotion not as the result or goal of the work of art but rather as an interesting substance within it, combined with the idea of the novel as a kind of actualising thing in the world, a spell… I just love it.

He gets a lot of shit, deservingly in places. But his work risked something, risked beauty and humiliation and again class suffuses his novel in a way antithetical to most canonical literature.

I like the idea of a fantasy desperately trying to maintain itself and failing at the point of completion.

The Autodidacts — The Lighthouse, 1982 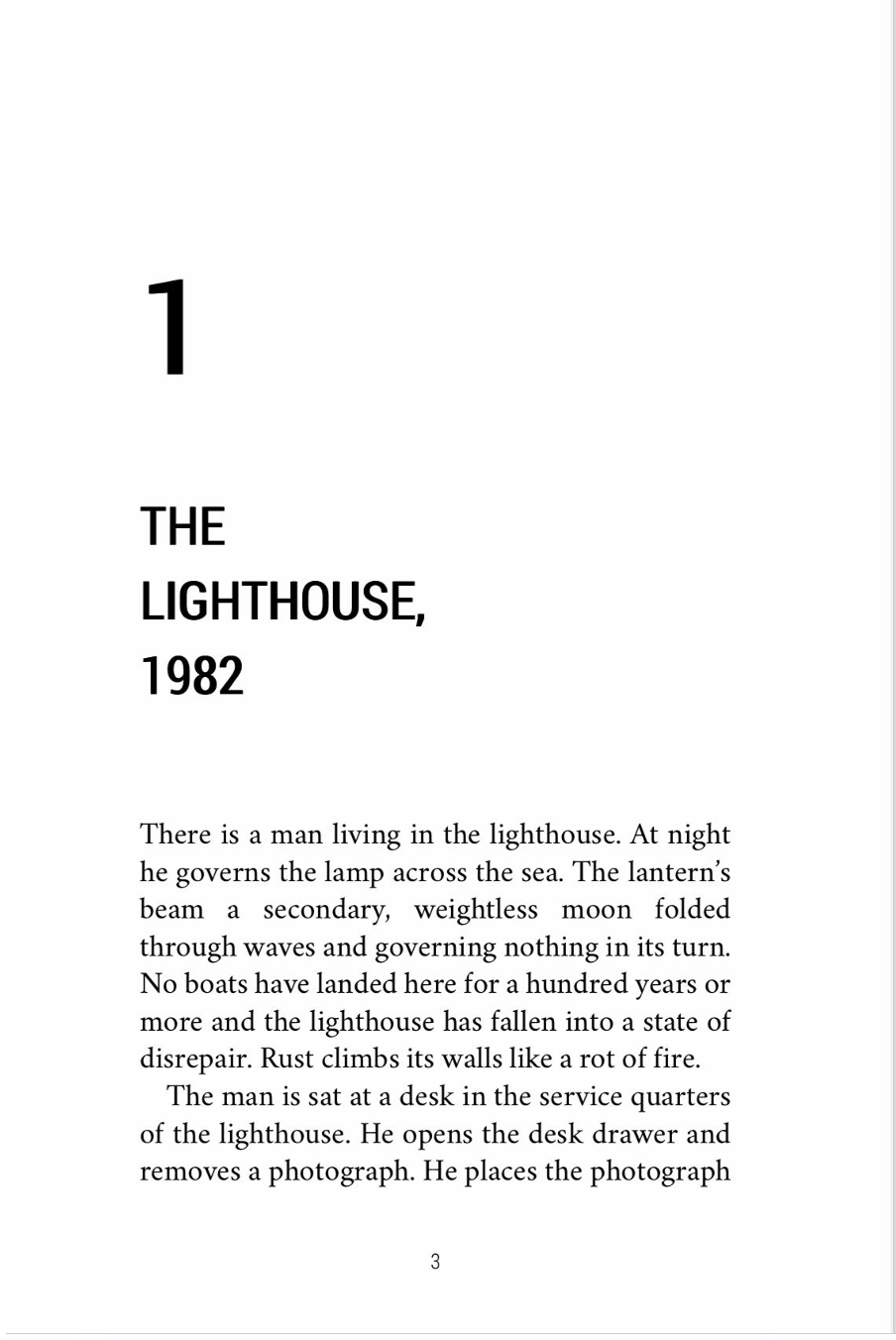 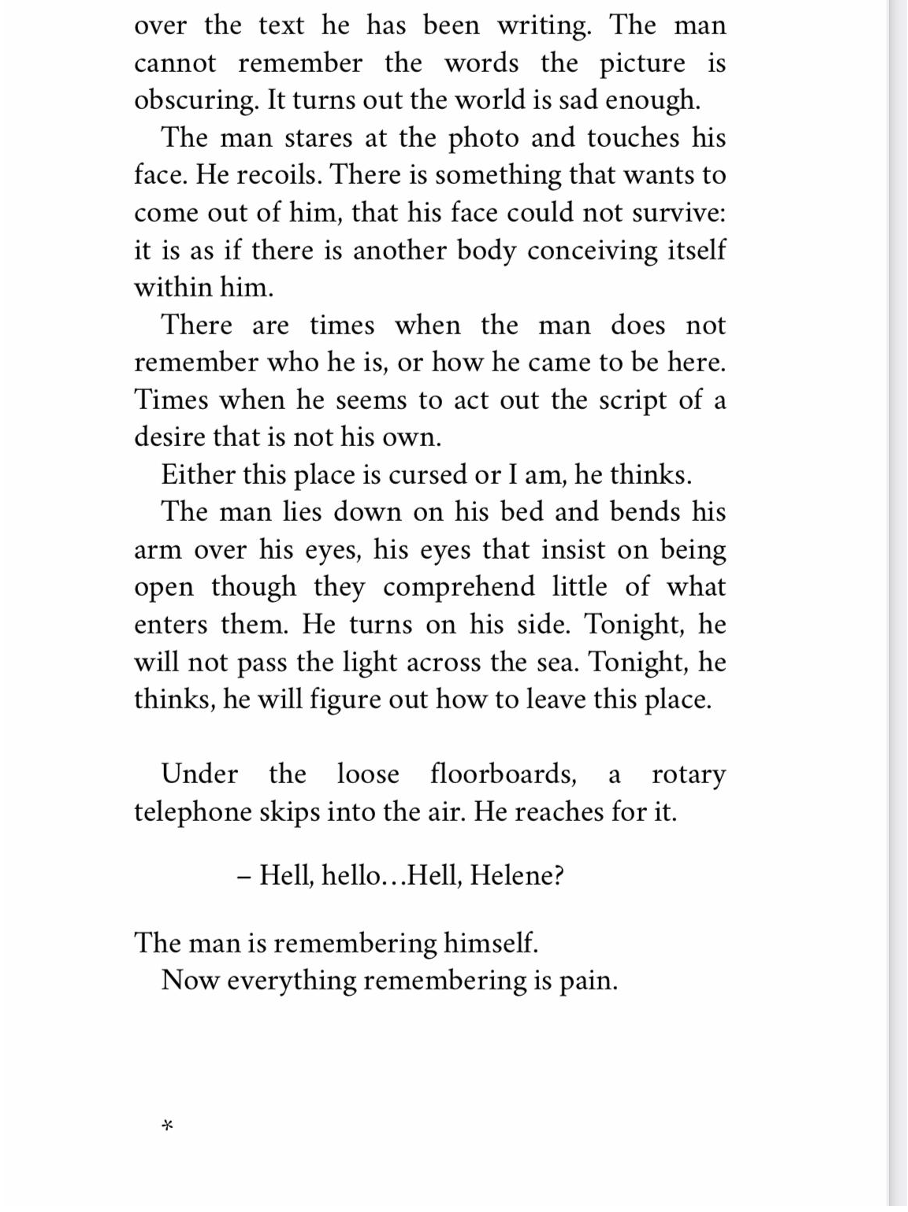 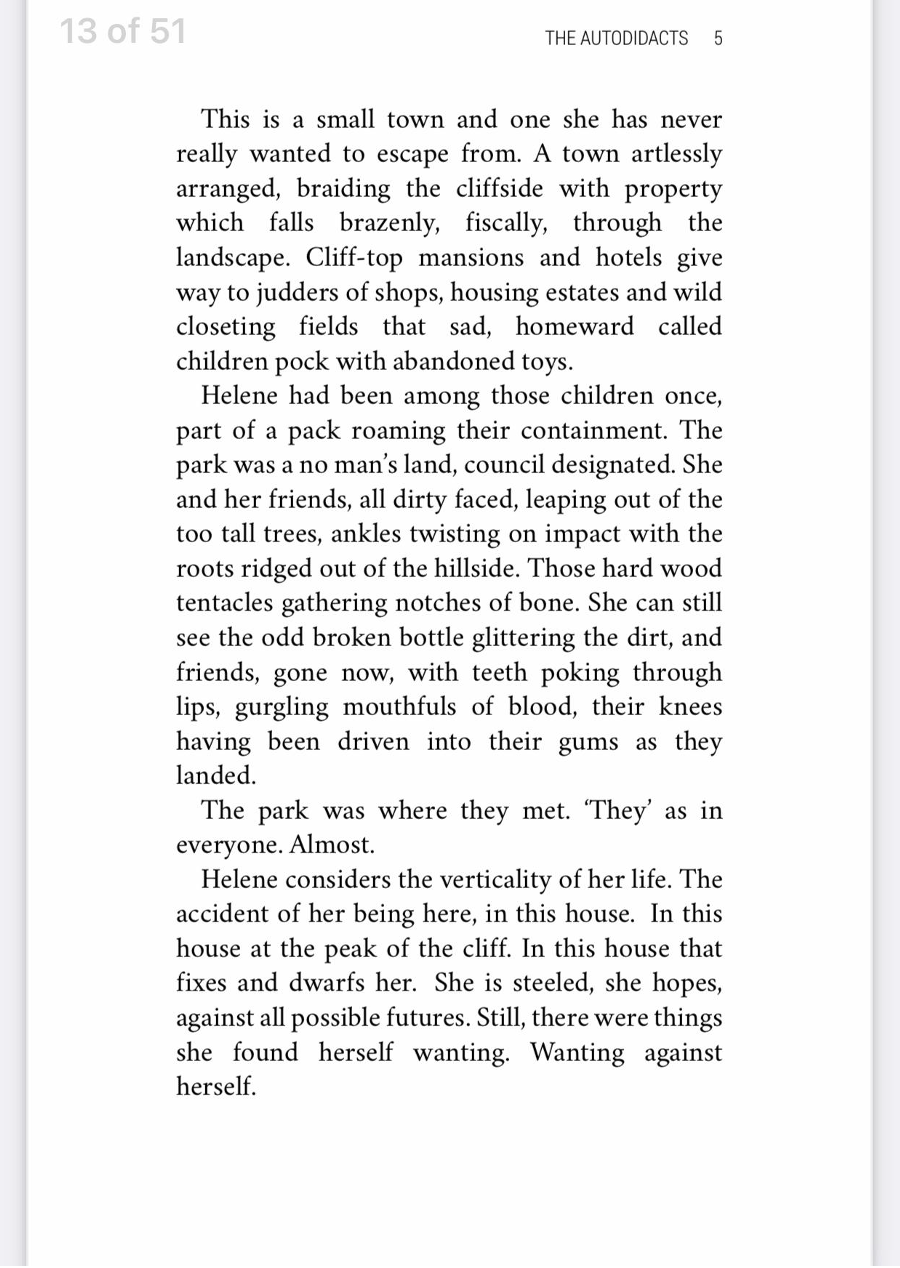 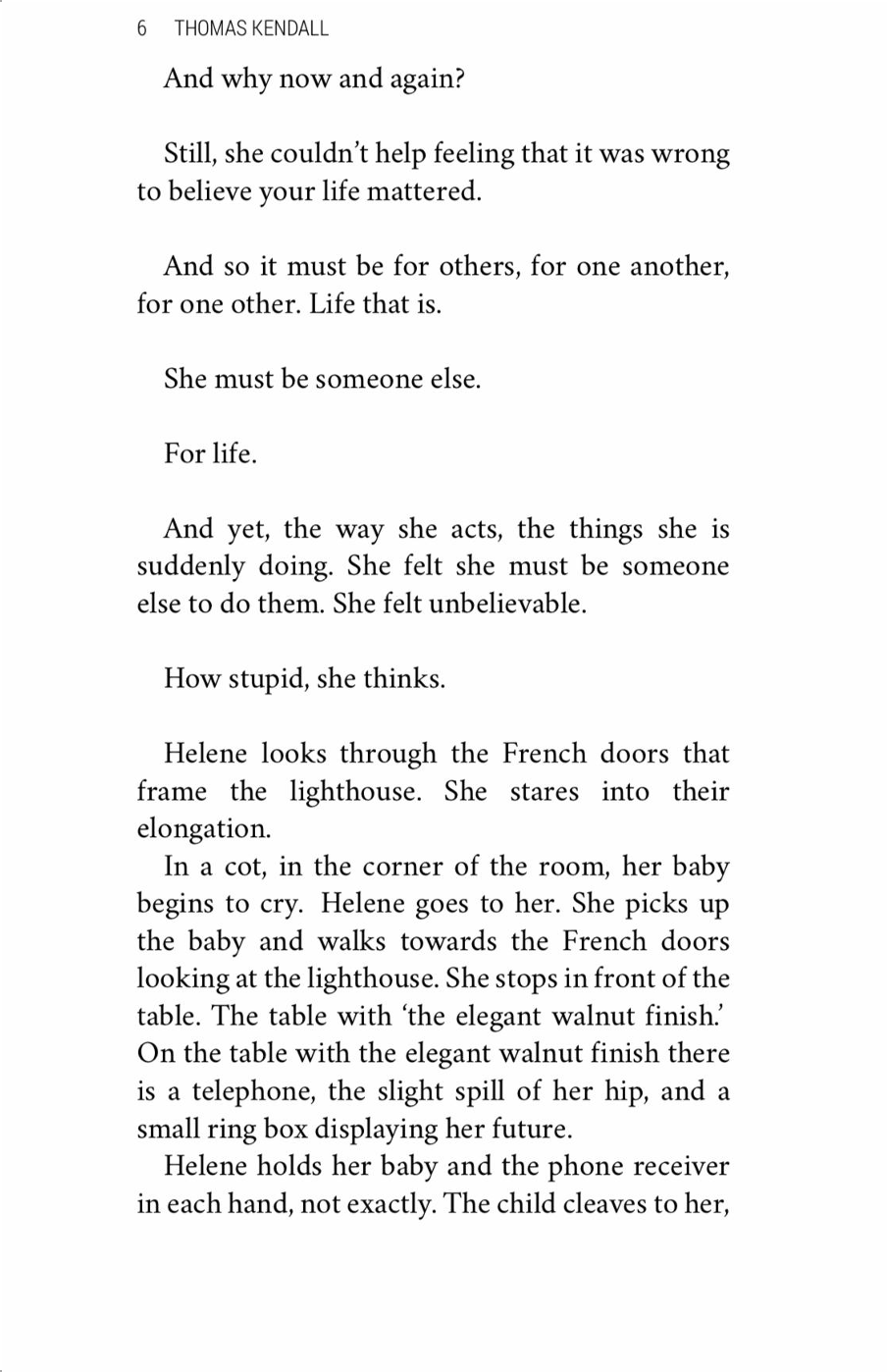 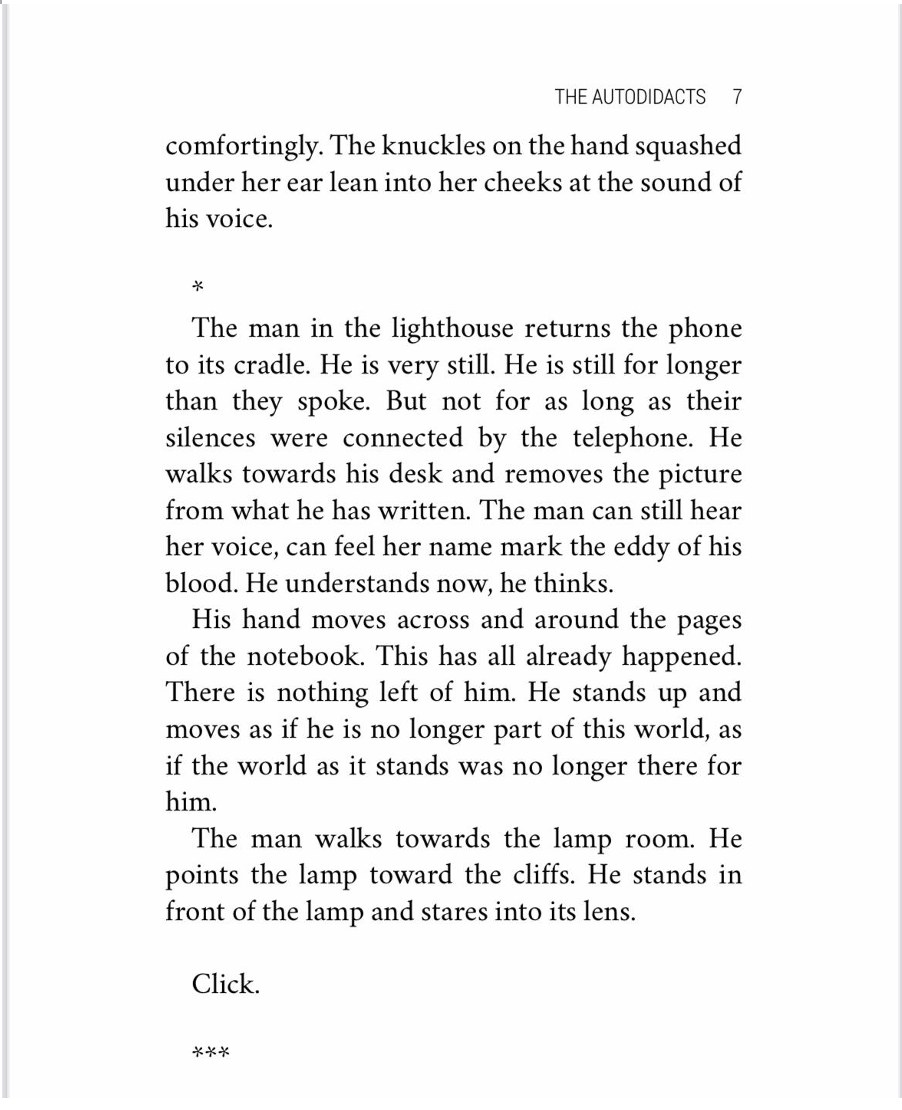 I’d like to thank both Dennis and the Blog community. This place has been an education for me over the years and I’ve discovered so many artists and writers that have been immeasurably important to me. Mark Gluth, Jeff Jackson, Thomas Moronic, Slatted Light… All of you have helped me in innumerable ways. I’d also like to thank my friend and musician par excellence Matt Lyne for the cover work he made for the novel. Last but not least, thank you to Miette Gillette for taking a chance on this book.

p.s. Hey. ** Today is an especially happy occasion because the blog gets to help mark the birth of the very long-awaited first novel by the extraordinary writer and longtime DC’s supporter/denizen Thomas Kendall. I’ve been an admirer of Thomas’s fiction for ages, and at long last the world at large can join in. It’s a gorgeous and brilliant novel that I highly recommend to all. Please peruse its evidence, and grab the thing itself if you are so inspired. Thank you, Tom, for letting the blog be part of the meet and greet. ** David Ehrenstein, Ah! ** Steve Erickson, I think ‘Vortex’ can’t help but be better and hopefully significantly so. How was it? I’ll see in the next day or two, I think. Oh, I didn’t actually get a good look at the DVD he bought. (Gisele and I were there doing a launch event for the ‘Jerk’ DVD and my attention was pulled elsewhere.) I’m glad you liked ‘Bee Reaved’. Yeah it’s/she’s great. How’s the Gran Fury book? ** Bill, I’m with you on the buckets, and I don’t know why either. Well, I guess because the pleasurableness seems obvious? What’s not to like? My head cold is being very stubborn, but there is incremental improvement at least. Thank you. Potemkine also handles the theater release in France for small, daring films and releases films on DVD, and I suspect those ventures in combination is what helps keep their flagship store afloat. My weekend was meetings and Zooms and some seeing of friends and a lot of sniffling. Happy week! ** Dominik, Hi!!! Oh, yeah, your Friday comment didn’t show up. Weird, and, well, not so weird given this place’s technical oddness. Pollard is insanely prolific. Guided by Voices alone have 35 albums and counting, and he releases hundreds and hundreds of other albums, singles, cassette-only releases, etc. at an alarming pace. I think there’s a book of Lou Reed’s interviews. if I’m not mistaken, and, yes, I’m glad I was never in any of the interlocutors’ shoes, even when he was being ‘nice’, ha ha. My head cold is still hanging in there, taking its sweet time to die, but it is more negotiable now, so I guess I should feel lucky. It’s a mystery, right? The pimples thing. I had bad pimples for, oh, a couple of years, but then they gave up finally. But I remember people at my school whose faces were just ravaged by acne, and I don’t feel like I see teens with that level of facial devastation anymore. Maybe it’s worse in the US. I mean, almost everything is worse there, so that’s probably an answer. I want a robot that looks like me but knows how to schmooze, because I can’t (and don’t want to). Love creating an international holiday where everyone has to wear a hat that is an exact albeit shrunk down replica of the tallest building in their country for 24 hours, G. ** _Black_Acrylic, Ah, you were one of those robot drawing kids! I used to know kids who drew robots all the time. How many of those 400 records are 12″ singles do you estimate? I’m guessing a significant portion? ** Misanthrope, Oh, yeah that old paranoiacs’ wives tale, sure. I’ve never trued Kimchi. I’ve never really want to. It looks (and smells)… I don’t know. That Justin Isis, covering his bases. ** Bernard, I think that makes total sense on your automaton preference. One of the problems with the high tech, ultra-realistic robots is that they only ‘wow’ in person. Which in most cases means being Japan. Which you and I aren’t, clearly. My weekend was relatively quiet as well, at least externally. See you very soon? ** Ryan the abominable twink, Abominable is a very underrated, underused word, so I’m happy to see you employing it. Apart from my head cold and various film project related stresses, I’m fine. How is your brother like you, and how is he different from you? Wow, it sounds the budget on your dream video would be pricey, but, wait, Kenneth Anger, Jack Smith, the particular charm and magic of the handmade and low budget, etc., I guess it wouldn’t have to be. The film is … having growing pains at the moment, but that’s really no surprise, and onwards, and thanks for asking. Have fun with the family, and I guess try to enjoy having to be relatively silent? Hugs, me. ** Okay. Devote yourselves to the introduction to Mr. Kendall’s excellent novel today, thank you very much. See you tomorrow.