Mine for yours: My favorite fiction, poetry, non-fiction, film, art, and internet of 2019 so far

Brian Evenson SONG FOR THE UNRAVELING OF THE WORLD  (Coffeehouse Press)

Isabel Waidner WE ARE MADE OF DIAMOND STUFF  (Dostoyevsky Wannabe)

Will Alexander A CANNIBAL EXPLAINS HIMSELF TO HIMSELF (The Elephants)

Aki Onda A METHOD TO ITS MESSINESS (Thalamos)

William Basinski ON TIME OUT OF TIME (Temporary Residence) 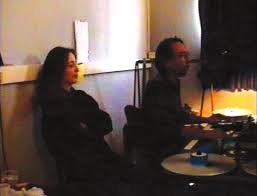 Vija Celmins TO FIX THE IMAGE IN MEMORY (SF MOMA)

p.s. Hey. As it says in the headline, if there’s stuff that’s come out this year that you especially like and/or recommend, I’m always hungry for new discoveries in every medium. ** _Black_Acrylic, Hey. Yes, I remember that YnY piece, cool. Everyone, Back in 2009, Ben ‘_Black_Acrylic’ Robinson and some artist pals had a lively talk about Ryan Trecartin’s videos for the legendary, much missed zine Yuck ‘n Yum, and you can still read it, and obviously I recommend you do. Here. ** David Ehrenstein, Ha ha, well, if it’s your cat’s favorite, I should try again, but I’m pretty sure I won’t last long. Gisele likes it. I do not know Wheeler Winston Dixon’s work, and I will correct that ASAP. Huh. Thank you! New FaBlog! Everyone, Mr. E’s FaBlog has a new thing at its top called ‘Alexandria Again and Forever’ and you can conjoin with it here. ** Sypha, Hi. Interesting. I know Japan is extremely all over the trading card thing. There are a lot of shops here catering to Japanophile pop culture fans, and they’re stuffed with packs of trading cards for not just Japanese things but even really obscure and out of date US TV, bands, movies, etc. The Shiel book sounds so up your alley, and intriguing. That reminds me that I really need to order some books from Snuggly. I’ve been meaning to for ages. ** Steve Erickson, I’m very to have been able to make the introduction between and Ryan’s work. Yeah, I’ve tried to get his stuff programmed in film contexts, but it’s very difficult because they’re considered by the galleries that represent him to be commodities, and the galleries are hesitant to let him escape the marketplace. I know that’s frustrating for him. ** cal, Hi, Cal! Weird, I was just thinking about you and wondering how you are yesterday. Nice. I’ve mostly been quite good, really busy with the ‘PGL’ release and a TV project I’m co-writing and the early stages of Zac’s and my next film. But it’s all good. Very happy you like Ryan’s work. A favorite? That’s tough as he’s consistently amazing. Maybe ‘I-BE AREA’ or ‘Center Jenny’, but it’s hard. I usually recommend ‘A Family Finds Entertainment’ as a great way into his work. Congrats on finishing school! Is the new job interesting as well as fruitful? Cool, I hope you like ‘PGL’, fingers crossed. Man, really good to see you! I hope I get to see again soon. ** PinkKeatons, You’ve got some good weed there. When you go to the theme parks, I’ll give you some must-see tips. Zac and I rode almost everything at every park there except we didn’t get to Sea World. Paris Pride took place in St. Denis this year. Weird experiment. Apparently worked like a charm. ** Shane Christmass, Hi, Shane. My pleasure. Oh, man, how did I not know about your gif works before? Shit, I will be heavily and thoroughly all over that pretty much instantaneously. Thank you! Everyone, Super excellent writer Shane Christmass also works in the gif medium, which is, as you know, a medium I prize and think is vastly under-explored by artists, and Shane’s a killer artist, and I thusly recommend you go over here and luxuriate in IMAGE MACRO GIF ONE, as it/they are titled. Have fun! Oh, and the mixtape! I’ll be there too. Everyone, p.s. Shane has also put together a mixtape of stuff he was absorbing while writing his novel XEROX OVER MNAHATTAN, and I’ll bet that’s pretty heavily listenable, so go here too. Wait, I haven’t read that novel. Shit. I’ll get it. I’m pretty it would be up there in the post if I hadn’t spaced. But the year is young. Thanks, man. ** Right. Your day here has been introduced. See you tomorrow.