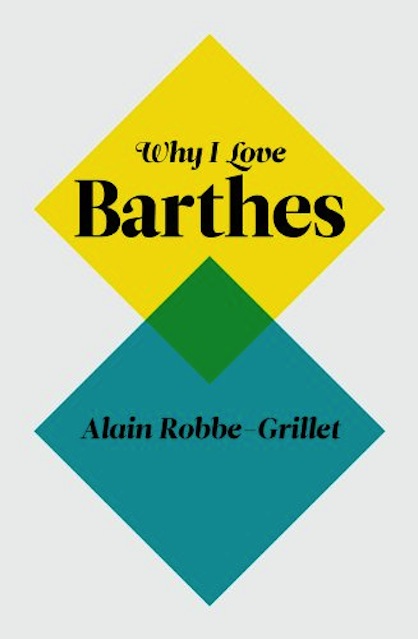 This is a precious little book to understand Roland Barthes and modern writings that happened in the cases of Roland Barthes and Alain Robbe-Grillet. The small volume of this book may cause people to underrate the quality of this book. But I went through many Barthes’s own books before I get to this, and delightfully learned various “theoretic” sides of Barthes’s work in this, more personable, but still finely trimmed, likable languages, while passing through hazy subjects such as memory, seed-bed of tics, cautiousness, contradictory personicity in/against the text, etc. One essay, ‘Why I love Barthes'(1978) is written in the form of cordial dialogue between Robbe-Grillet and Barthes, and the book, followingly, presents other essays on Barthes, (Roland Barthes’s Choice, 1981, Yet Another Roland Barthes, 1995, and I like, I Don’t Like, 1980) in Robbe-Grillet’s own appreciation and tangential, albeit heart-learnt, adoption of Barthes’s personcity in his writing. A trial in this book is to distance a literary friendship from a real friendship between them, and instead, to focus on the text in their lovingly drifting dialogue and their own writings, “Barthes” and “Robbe-Grillet,” both as novelists via the text-slippages and the text-persons. I found it an excellent book for an advanced reader of Roland Barthes, in the textual-proximity from his diligent and amorous reader, Robbe-Grillet, not to mention, discovering its value to approach a friendship of Barthes and Robbe-Grillet, understanding what a literary friendship would be like. Also, Robbe-Grillet’s own essays display the emotions and the sentiments of the modern writer, in his attachments to small thingness such as the object-text, and catalogues of liking & disliking of them, in addition to the writer “Roland Barthes.” A great, little book for theoretic learning on writing and im/personal pleasure and felicity[bonheur], for modern melancholics, in detour of two writers, Roland Barthes and Alain Robbe-Grillet.

Four pages from my scrapbook of Why I love Barthes (1978) 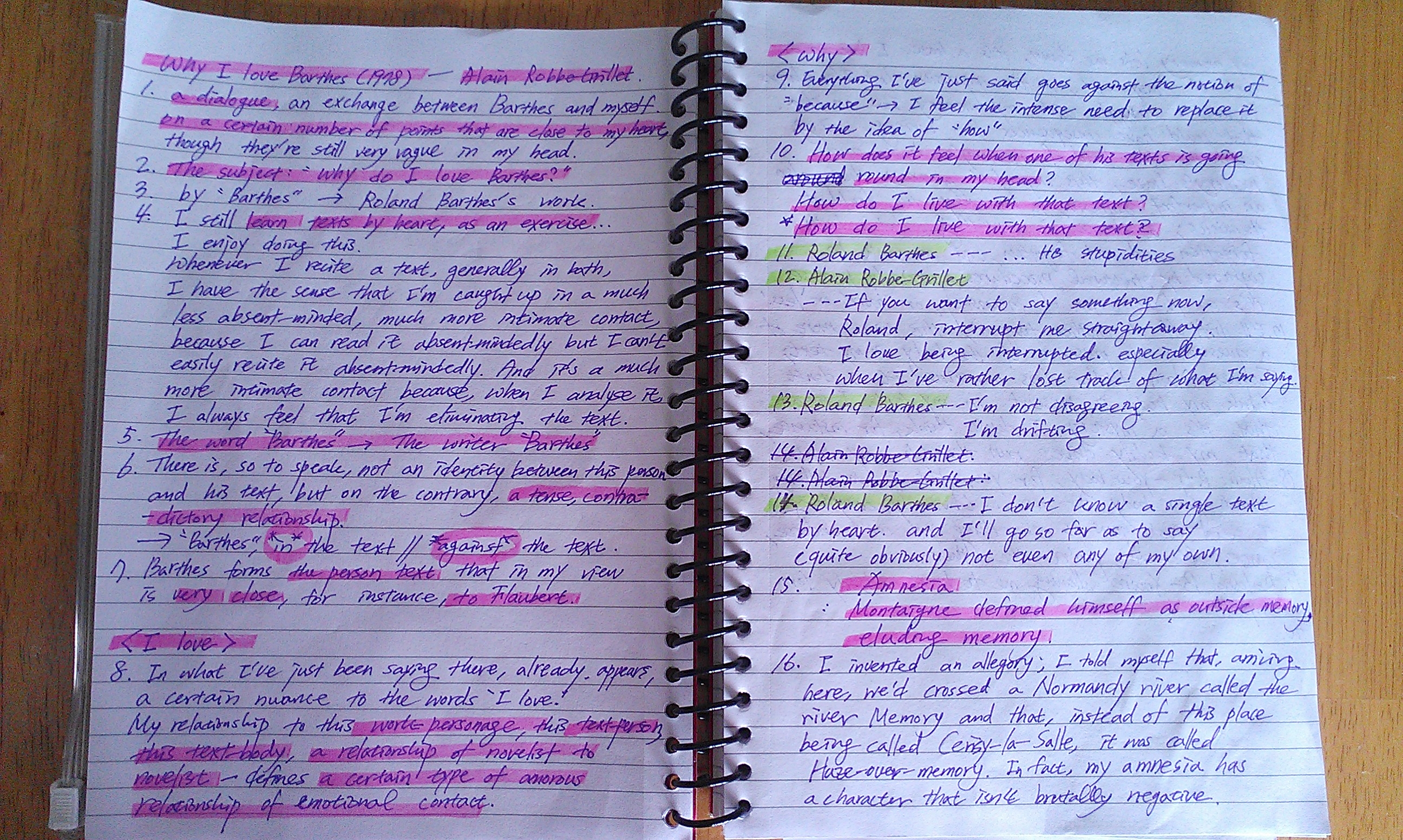 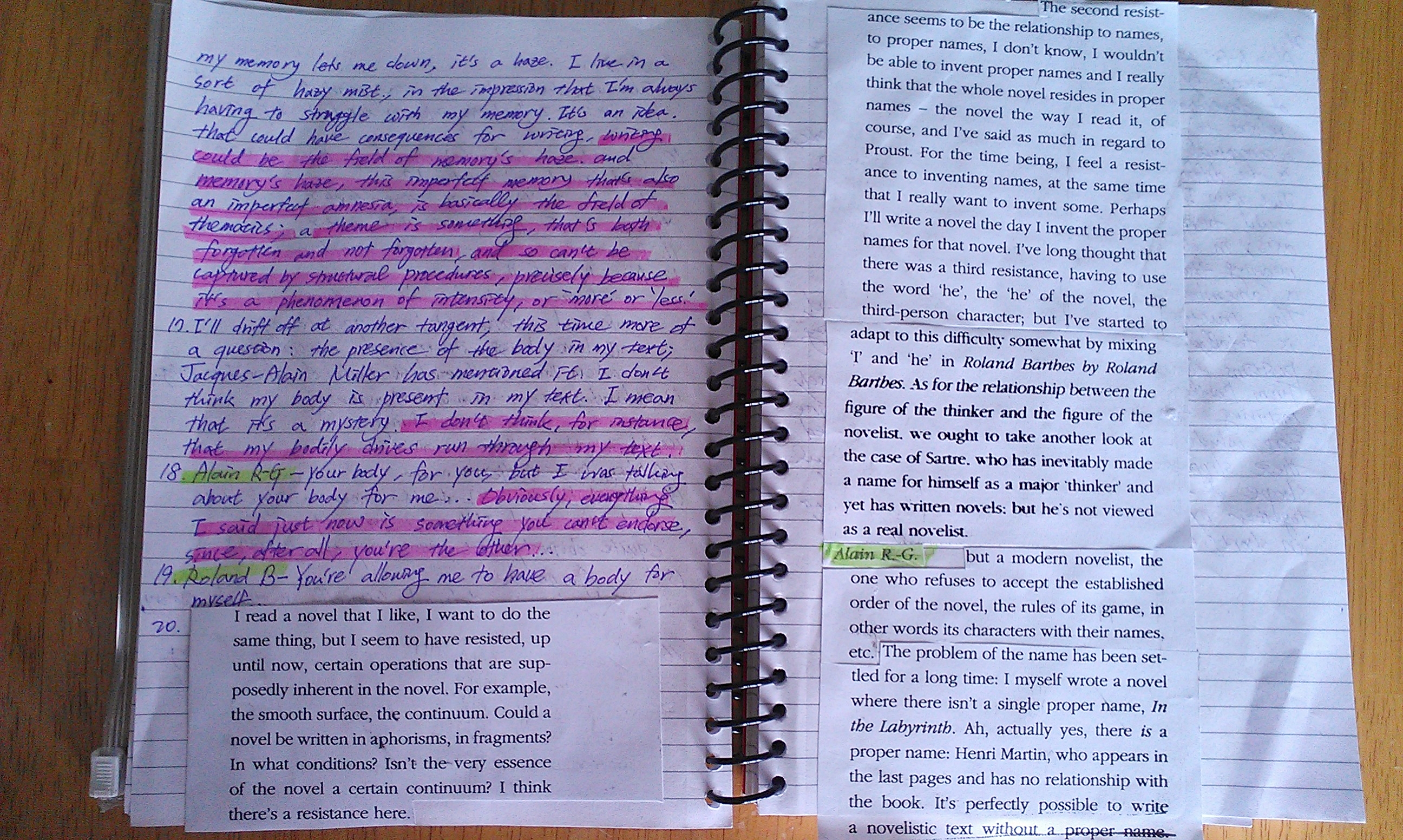 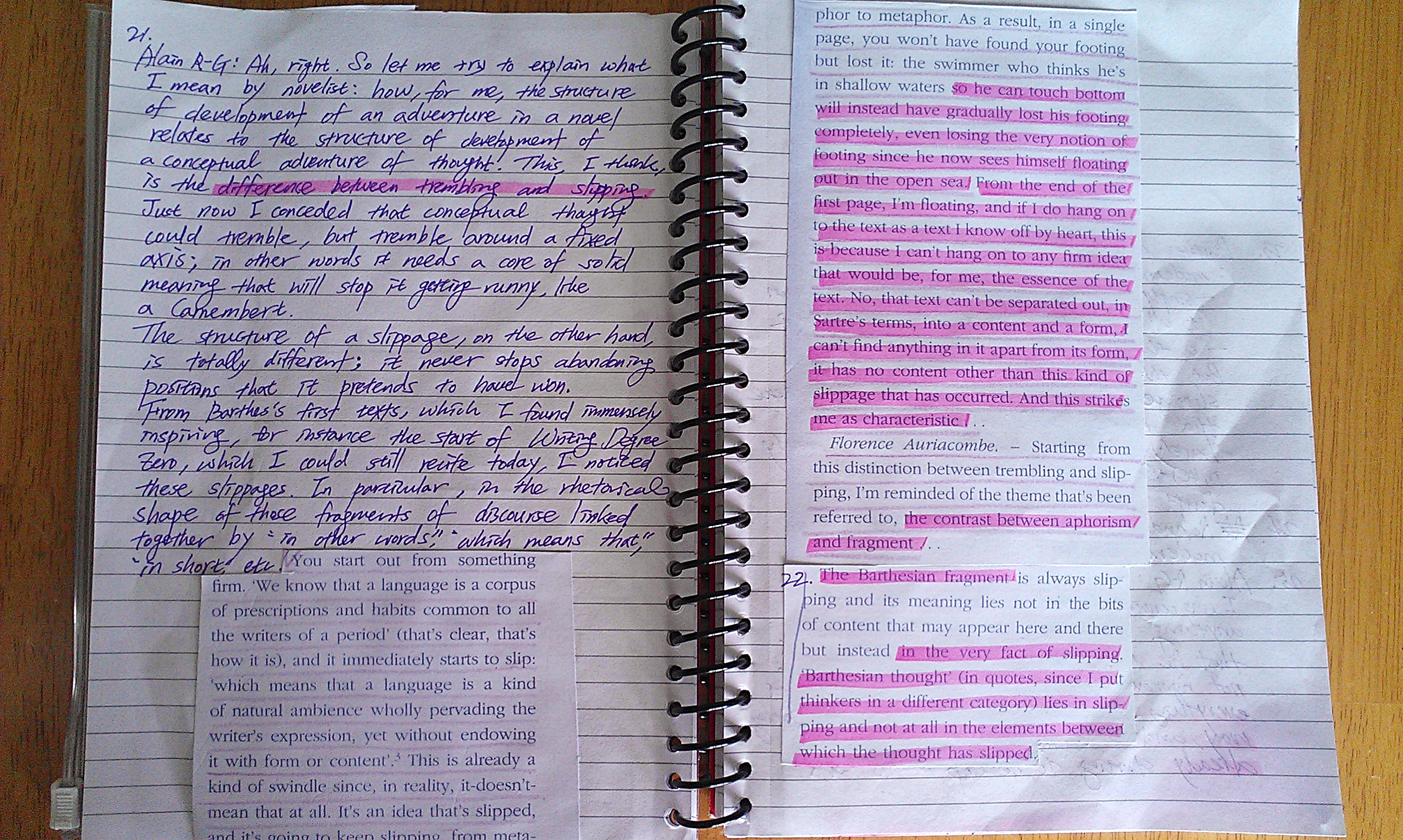 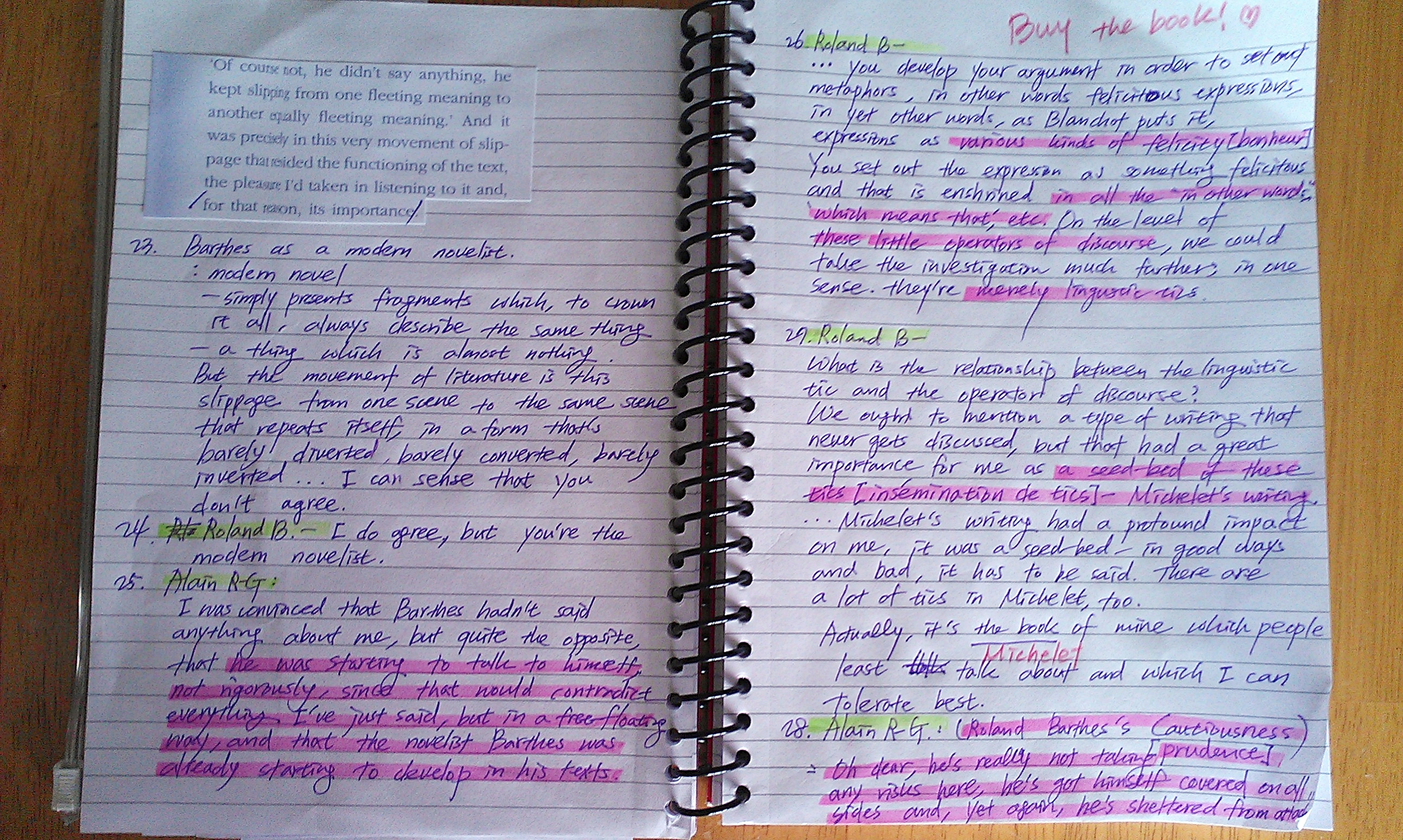 My highlighted, four pages of my scrapbook from Why I love Barthes (1978)

1. A dialogue, an exchange between Barthes and myself, on a certain number of points that are close to my heart, though they’re still very vague in my head
2. The subject: “Why do I love Barthes?”
3. By “Barthes” → Roland Barthes’s Work
4. I still learn texts by heart, as an exercise.
I enjoy doing this.
Whenever I recite a text, generally, in bath, I have the sense that I’m caught up in a much less absent-minded, much more intimate contact, because I can read it absent-mindedly but I can’t easily recite it absent-mindedly. And it’s a much more intimate contact because, when I analyze it, I always feel that I’m eliminating the text.
5. The word “Barthes,” –→ The writer “Barthes”
6. There is, so to speak, not an identity between this person and his text, but on the contrary, a tense, contradictory relationship.
—- “Barthes” *in* the text/ *against* the text
7. Barthes forms the person text that in my view is very close, for instance, to Flaubert.

9 . Everything I’ve just said goes against the notion of “Because”

→ I feel the intense need to replace it by the idea of “how.”

10. How does it feel when one of his texts is going round in my head?

14. Roland Barthes —- I don’t know a single text by heart. And I will go so far as to say (quite obviously) not even any of my own. 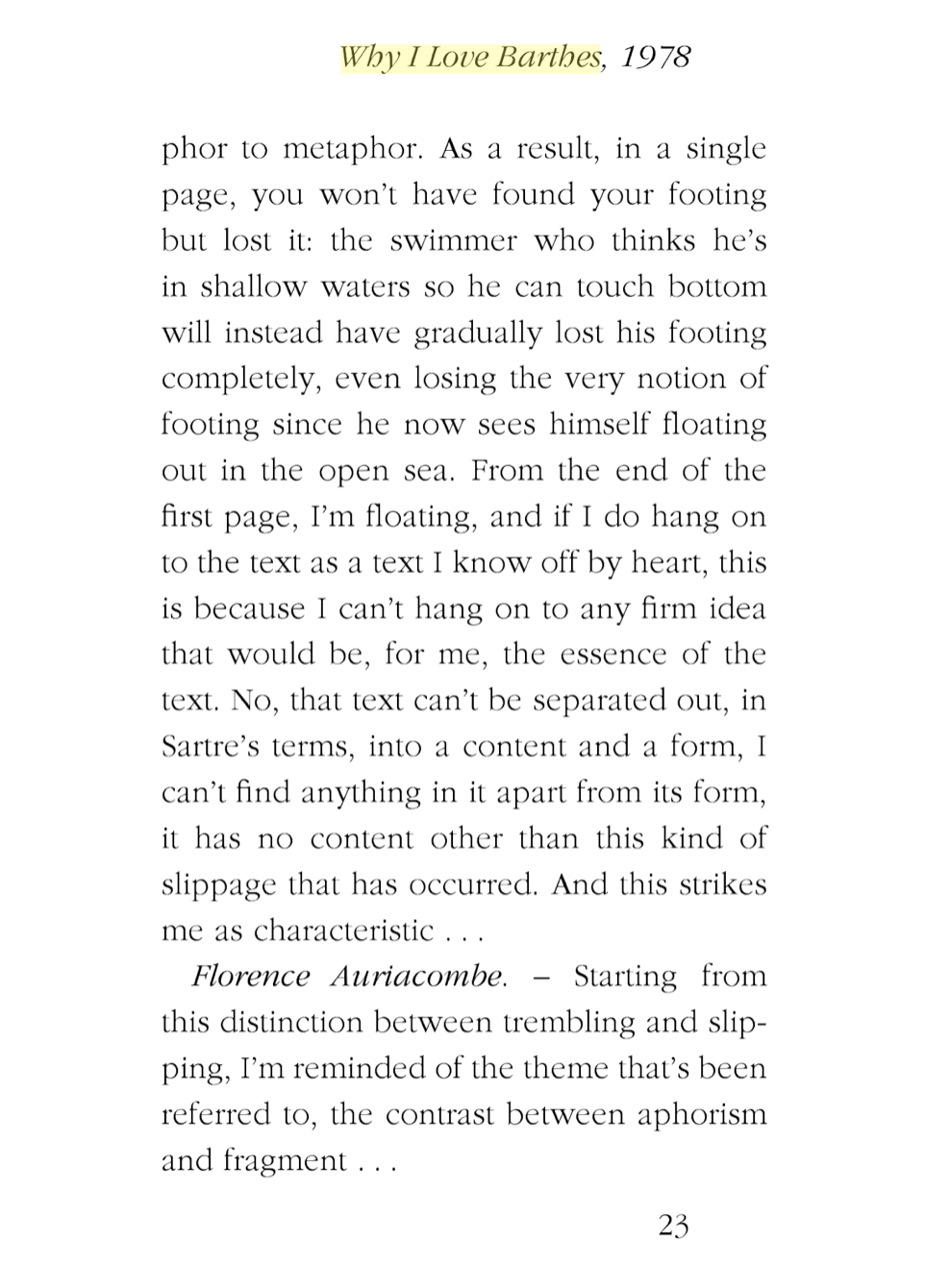 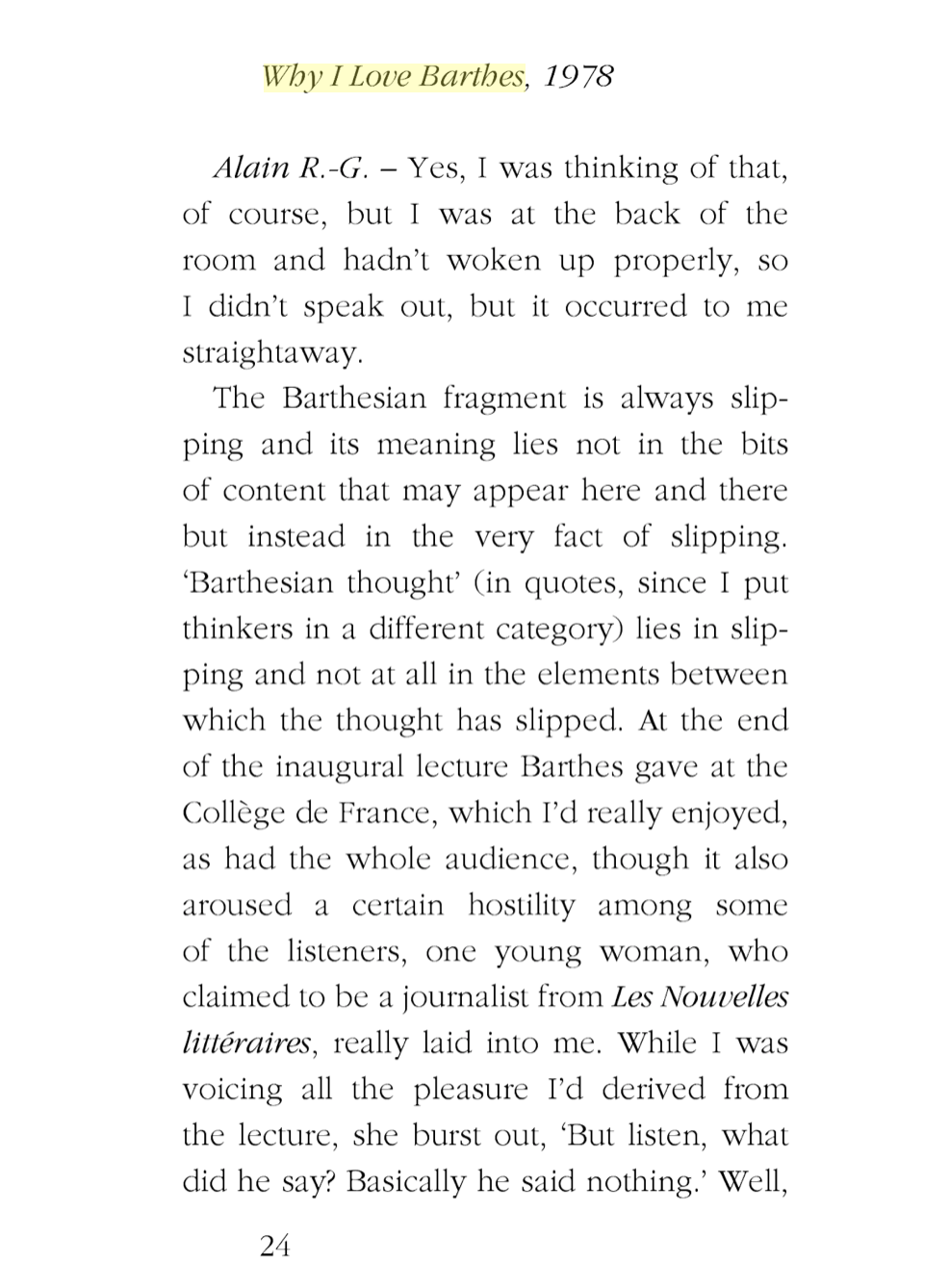 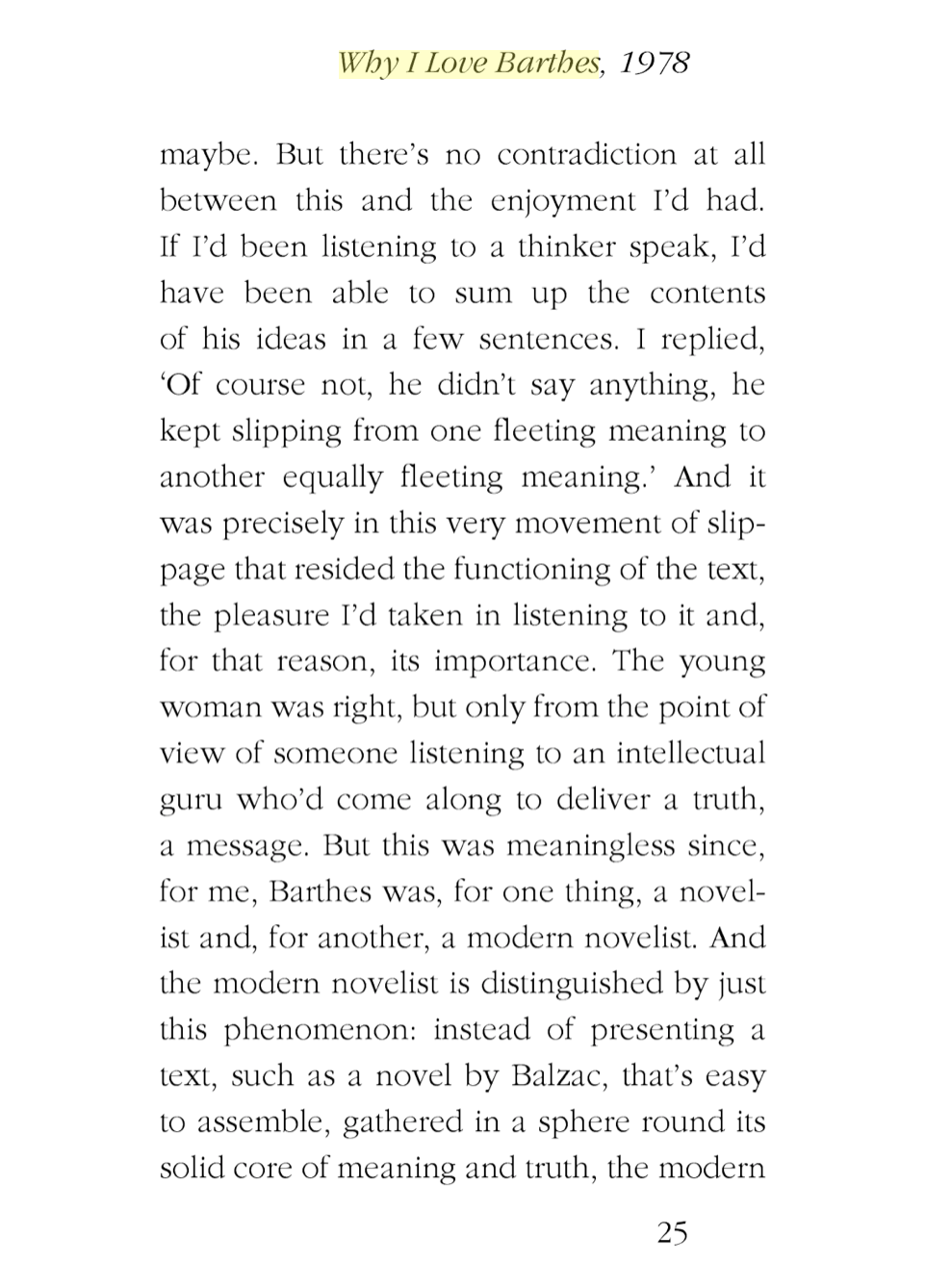 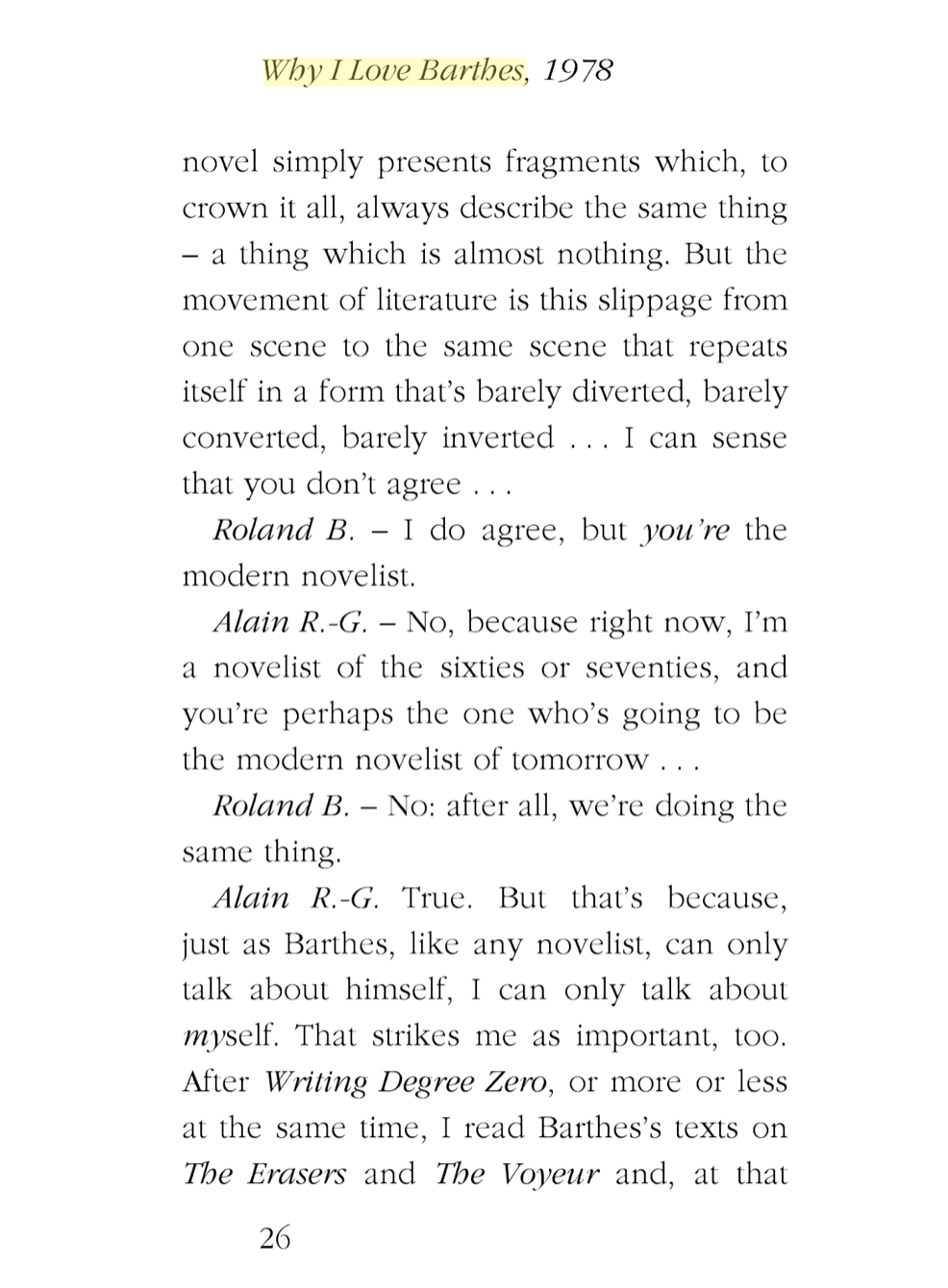 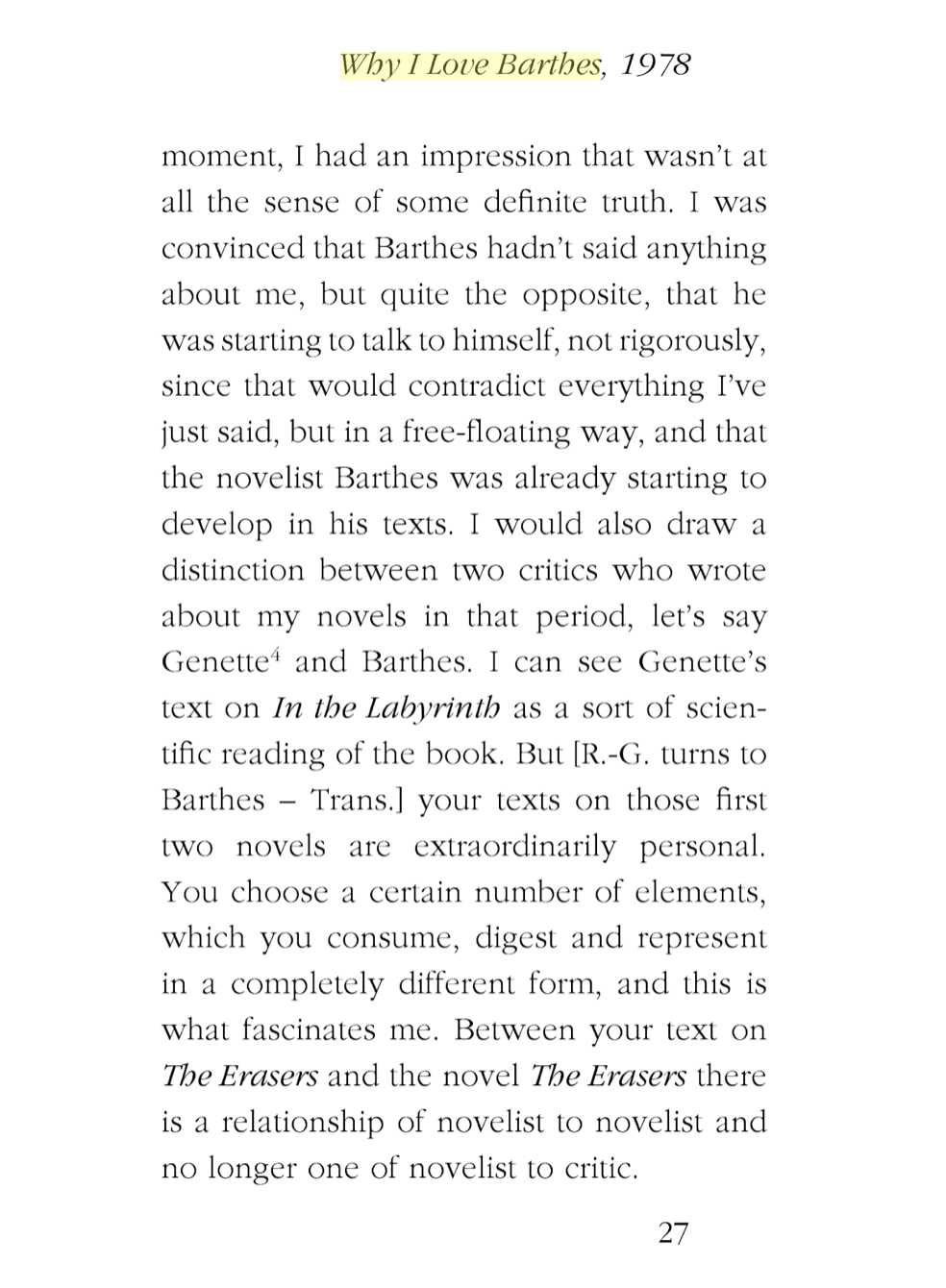 My favorite images of Roland Barthes, the images of his work-space too 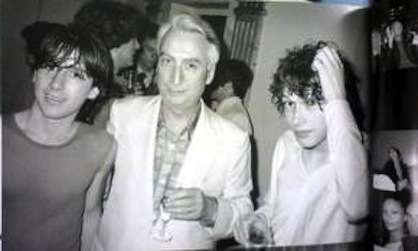 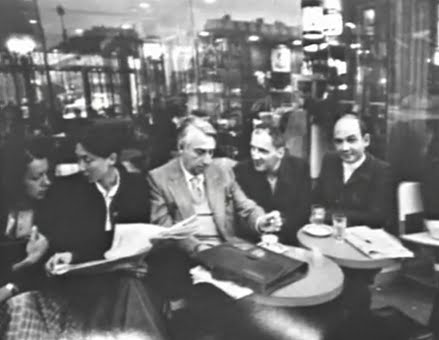 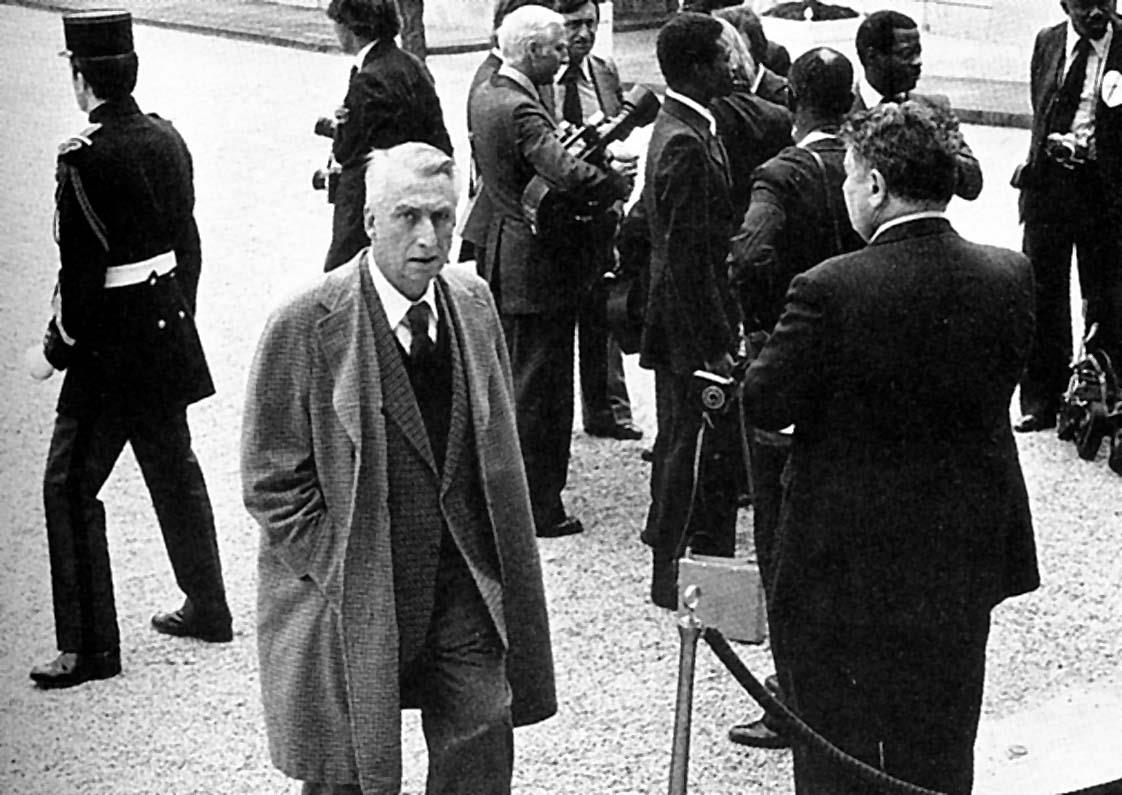 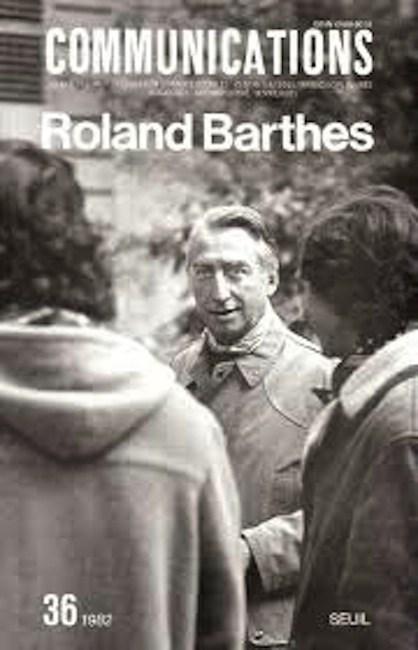 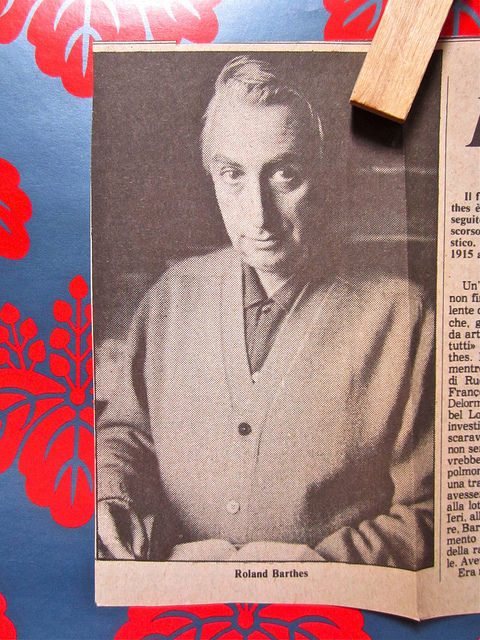 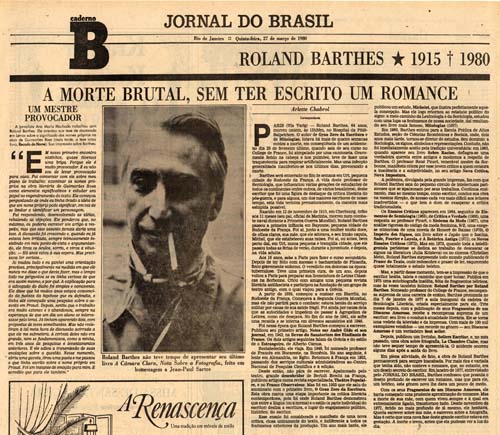 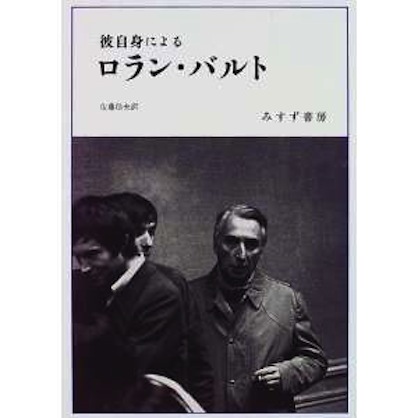 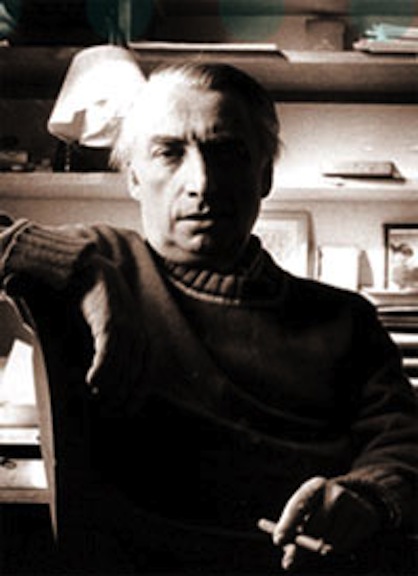 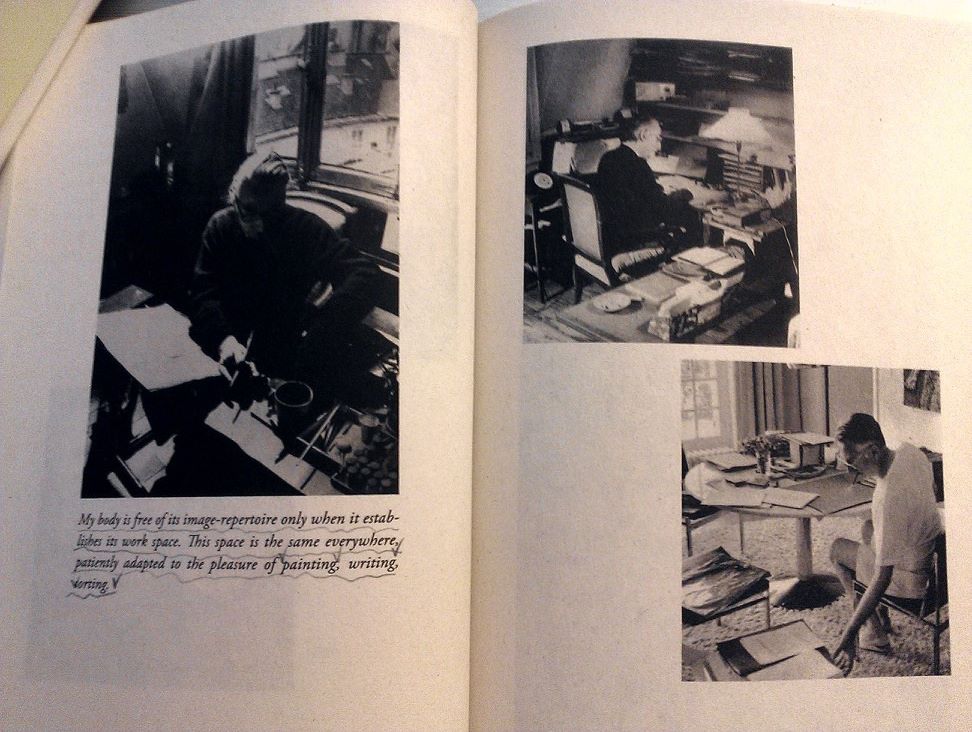 p.s. Hey. ** David Ehrenstein, Hi. Wong Kar-Wai is currently working on a new film billed as a sequel to ‘In the Mood for Love’ for better or worse. Everyone, Mr. E’s new FaBlog entry aka ‘Little Ms.Magical Thinking’ has it in for Marianne Williamson. Find out how. ** Bill Hi. ‘Gust’ is such a nice word. Yeah, I was surprised I hadn’t done a post on him before too. My favorite is ‘Fallen Angels’, but I pretty much like all of them through ‘Happy Together’ quite a bit. I haven’t seen the director’s cut or whatever of ‘The Grandmaster’, but I found the release version so disheartening that I switched it off pretty early on. ** Sypha, Perhaps that’s a sign for you to get familiar. ‘Popism’ is a lot of fun, yeah, I agree. Did not know Jung was an artist. Curious, that. I’ll hunt some. ** Steve Erickson, Hi. To me the slippage is already happening in ‘In the Mood for Love’, although it’s certainly much better than the films that followed. I actually reviewed ‘ItMfL’ for Artforum at the time, but I see the review is not online. I’m with you on wishing he would find his energised, spontaneous side again, but I suspect that’s a pipe dream. Everyone, Mr. Erickson has reviewed ‘The Babadook’ director Jennifer Kent’s new film ‘The Nightingale’ here. ** _Black_Acrylic, Congrats on finishing the story and high hopes that the editor knows what’s good for her. Yes, I’ve followed your song challenge picks on FB. Very enlightening. Everyone, the mighty _Black_Acrylic has a hot offer for you. In his words, ‘Dunno if you’re aware of a thing on social media called the 30 Day Song Challenge? I did it as a break from all the constant Brexit opinion on my feed, and in a world of constant trolling and abuse I found it to be a welcome spot of fun. Here is my list in the form of a Twitter thread and maybe you’ll find something you like.’ ** Jeff J, Hi, Jeff. Yeah, really great talk with you! ‘Fallen Angels’ is my fave of his. High five. On the one hand, it seems too simple to decide his break from Christopher Doyle was his downfall, but, on the other hand, that would explain it, wouldn’t it? As you probably know, Doyle quit ‘In the Mood for Love’ part way through, and the film is a visual Frankenstein of bonafide Doyle style and faked Doyle to make the film hang together. There is that problem that happens when directors start to take themselves too seriously, and I do think that could have happened with him. Like you, I thought there were nice things in ‘2046’, but I more thought it had the same problems of ‘ItMfL’ on a bigger and more fatal level. Like I told someone above, I couldn’t make it through ‘The Grandmaster’. ** Misanthrope, Thanks. Chill weekend sounds mighty good. I want a de-chilled weekend. Well, de-chilled me-wise not de-chilled weather wise. Compare notes? ** Okay. Today I am restoring a great and visually exciting post made for prior version of here and for everyone then and now by the excellent writer and scholar and d.l. h. Enjoy the heck out of it. See you tomorrow.