Brendan presents … Guilty is a Blast: One Guy’s Love For a Band Called Oxbow * 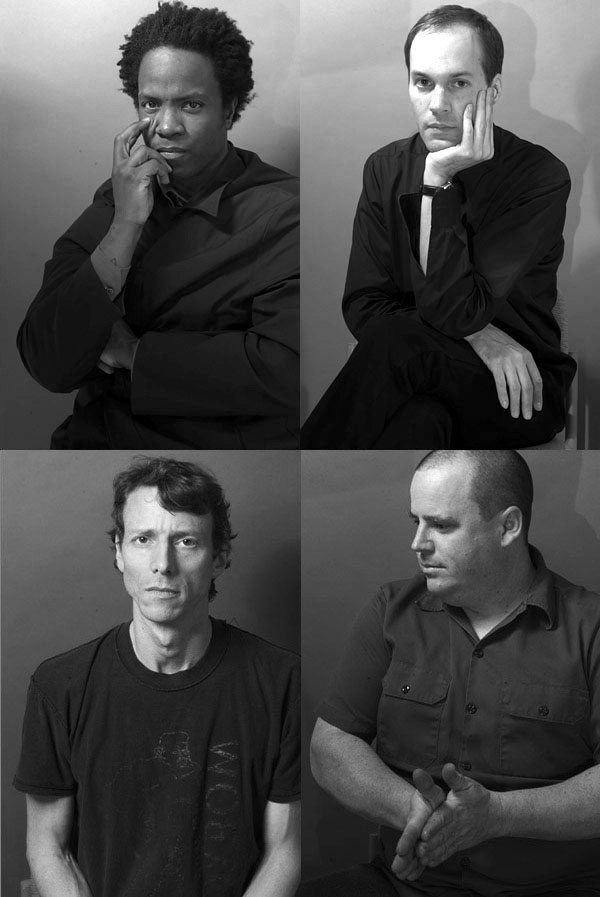 I still remember all the details about the first time I heard Oxbow. They are like that. Like an assassination or natural disaster. You always remember where you were. Having read about their association with Neurosis, I went with a friend to pick up An Evil Heat, their 2002 record. She bought something by Cat Power. Then we went back to her house. I put on my purchase. What came from the speakers can only be described as an assault. An assault on my ears, an assault on pop music, an assault on reason. The first thing you hear is a man screaming, in terrible agony or blinded with anger. Or both. I was no stranger to what is often called “extreme” music, but I wasn’t ready for this. This was a level of sonic terrorism that unsettled me. I knew I had found something great, but I was scared to death.

“Love the sinner and scorn the sin!
Now Goddamn ya – let me in”

My friend was seriously put out, and insisted that I take it off and put on Cat Power. Now I really was depressed.

Later, alone in my own house, I could listen. It felt dangerous, like reading a banned book or watching a samizdat film in Ceausescu-era Romania. Years of Slayer, Morbid Angel, Ulver, Melt Banana, Pig Destroyer, Earth, Boris, Zorn etc hadn’t prepared me for this. The record made me feel like I was hearing the avant-garde for the first time.

The music was quiet and deafening, fast and slow, subtle and bludgeoning. The vocals seemed from another world, a wandering falsetto, a desperate agony, a ferocious growl. The songs seemed shapeless, ready to fall apart at any moment, but never did.

Later I would learn about this band. When I discovered them they had been around for almost 13 years. They put out Fuckfest in 1990, followed by King of the Jews, with a smiling Sammy Davis Jr. on the cover, in 1992. They had formed from the ashes of Whipping Boy – an important 80s west coast punk band. Eugene Robinson the singer and Greg Davis the drummer formed with Niko Wenner on guitar and Dan Adams on bass to start Oxbow in 1989. They were prolific in the 90s, also putting out Balls in the Great Meat Grinder Collection, Let Me Be a Woman and Serenade in Red.

They have worked with everybody – Lydia Lunch, Marianne Faithful, Jarboe from the Swans, Jon Raskin from the Rova Sax Quartet, Zappa producer Joe Chiccarelli, Kathy Acker, Klaus Flouride from the Dead Kennedys, Richard Kern, Steve Albini. They had toured extensively all over the world, had a top ten hit in several European countries and were living right in my back yard. And I had never heard of them.

My mother she butchered me
My Father he ate me
My litter sister Ann Marie
She gathered up the bones of me
And tied them to a silken cloth
To lay under the Juniper
Tweet Twee, what a pretty bird I am! 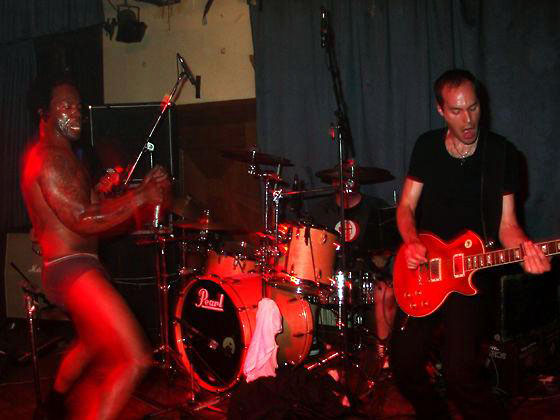 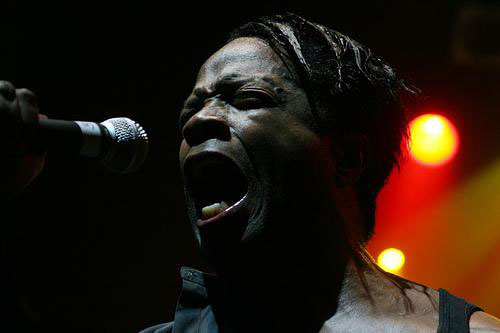 But I wasn’t alone. Because apparently very few people in the US had. Such a cliché – big in Europe, unknown at home. Trying to rectify this as soon as possible, I gathered up the back catalog. The early records were a revelation. A slow move toward a kind of Faulknerian southern grotesque, a world populated with lecherous fathers, drunken snake handlers and murdering shack dwellers. There was extreme violence in this music. This was art that came from a dark, dark place. But where did all this originate? The band was living in idyllic Northern California, all of them holding down respectable jobs. Eugene is an accomplished writer and magazine editor. Niko and I once voted next to each other, for fuck’s sake.

Jesus. Had nothing to do with this really.
Even less than some would like to think.
Up around the third floor back.
And back up in the fucking ink.

The pulse goes slow, the lights glow lower
And I stagger in the stairwell stinking
Coffin style and styling
No man is an island? Like hell, I was thinking. 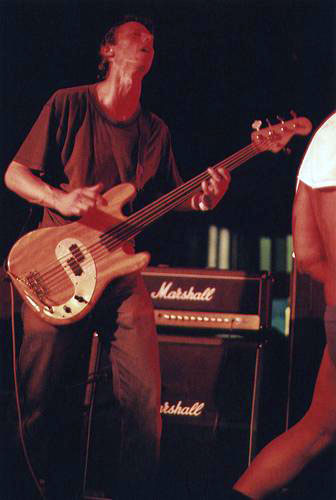 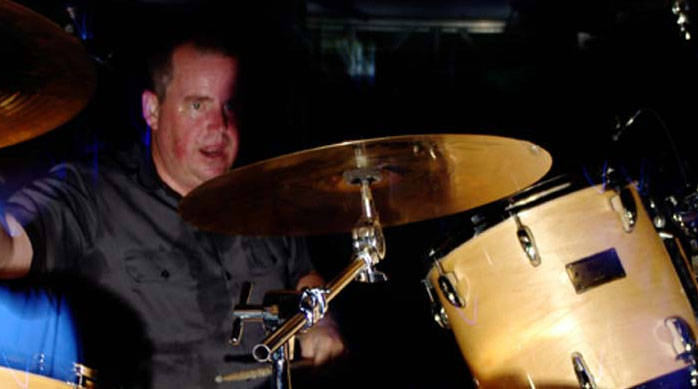 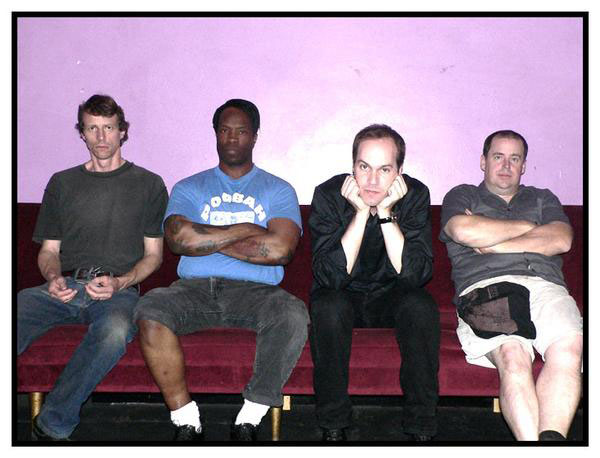 They make great records. But Oxbow is really a live experience. There is a Artaud-like theatricality to their performances – something severely lacking in our age of punk rock “authenticity”. Eugene is a sweaty, naked beast on stage. He appears just on the verge of atrocity. The audience stands back, not sure where the act ends and real horror begins. The band is a tight, complex, all encompassing machine. Niko layering his wall of chords with bright harmonics. Dan grinding out bass chords on his fretless, Greg effortlessly powerful and sparse. This is Oxbow. Undeniable, impossible to ignore, transcendent.

So I fuck like I prey
in secret
So sorry? Not hardly. 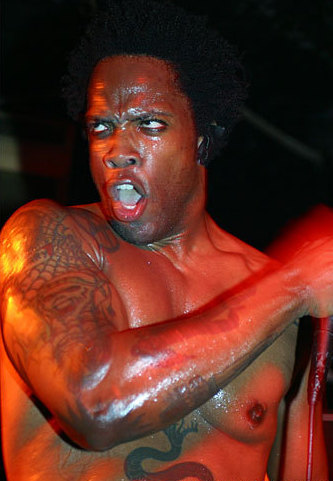 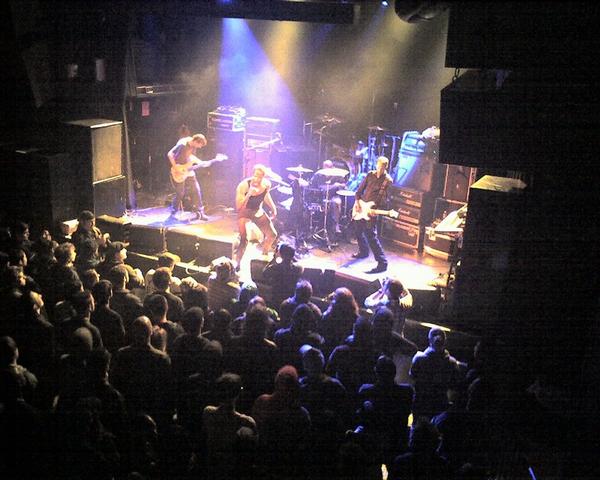 There is a real contradiction in Oxbow’s music. Eugene is a great lyricist and a great writer in general (he published this book last year) but one enduring theme I get from them is the limitations of language. Eugene’s screaming, wailing vocals hide and distort the lyrics to the point of indecipherability. The dynamic, bludgeoning sound floods out all rational thought. And live is where this comes through. Their live performance is truly somewhere outside of meaning, blurring reality with sheer force of will. This is what I love.

Oxbow signed to Hydrahead Records a while back and put out The Narcotic Story. It is a great record. Totally in keeping with what I love about them but pushed a little bit, of course. Full, lush strings, even more tortured and vulnerable vocals and moments of haunting quiet. Time, Gentlemen, Time just stuns me with its agony and dissonance. It is amazing that the band is still able to produce such powerful work nearly 20 years after they formed. They’ve managed to drill deep into me and have made a huge impact on my life. 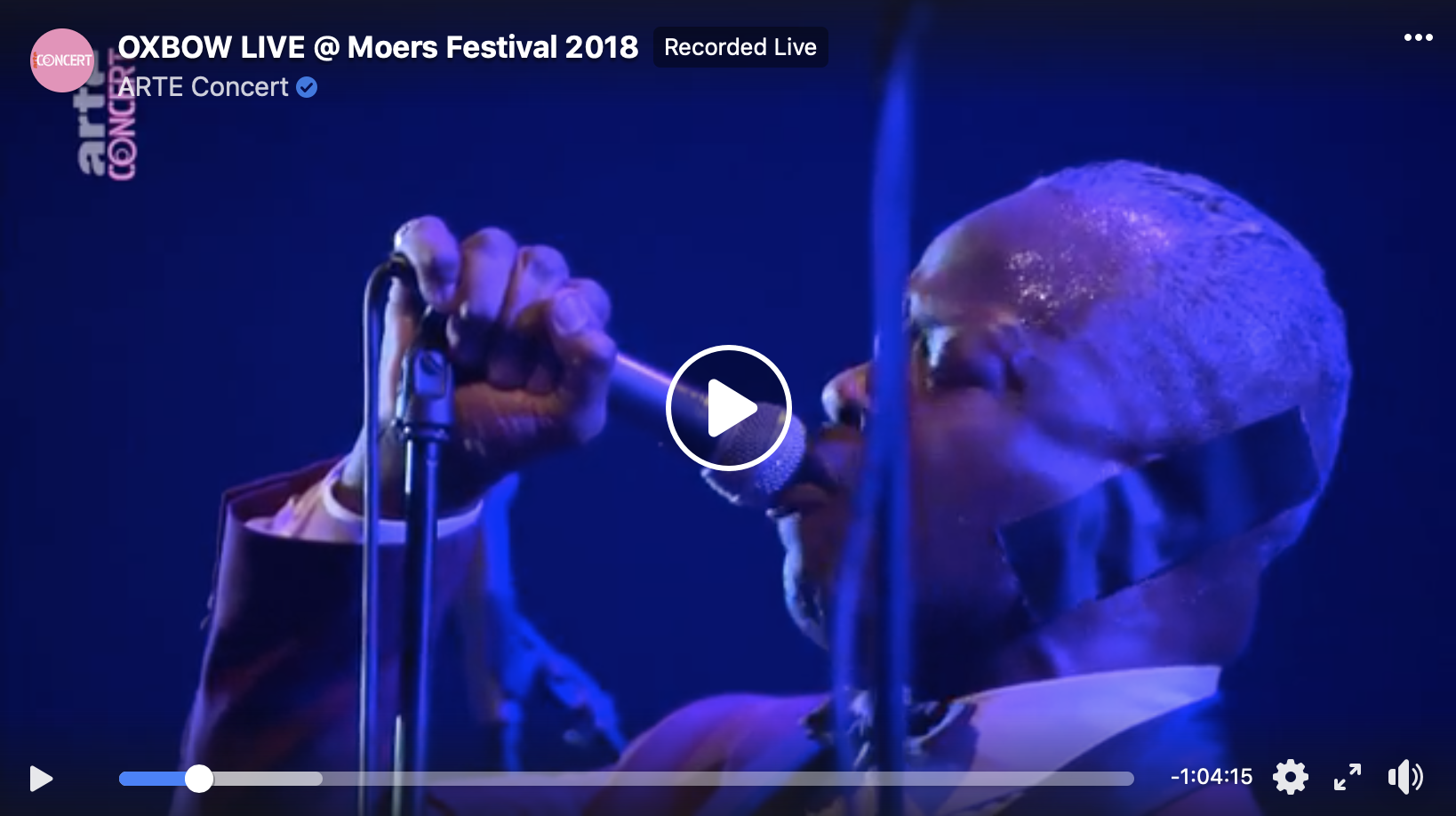 A complete Oxbow set recorded by French TV channel ARTE in 2018 can be watched here.

p.s. Hey. ** David Ehrenstein, Hi. I agree! Yes, I forgot about Hollis Frampton’s appearance in ‘Wavelength’, amazing. Not sure if I’m allowed entry into the New Yorker, but I’ll try. Everyone, FaBlog does Lonesome Donald. ** Jeff J, Hi, Jeff. Yeah, that gif was a lucky strike. Indeed, a great pleasure getting to talk with you. Will do on the Walser thing after our extended peek next month. Re: The Band, assuming you must already have ‘The Basement Tapes’, their third album ‘Stagefright’ is great, a must have. After that, the albums start to get spottier, but all of them have at least a few really good tracks up through ‘Northern Lights – Southern Cross’, which is a lot better than its reputation. The live album ‘Rock of Ages’ is very good. But the unimpeachably great albums from start to finish end after ‘Stagefright’, I think. ** Tosh Berman, So happy you think so. Yes, that Snow/Reich conversation was a great surprise, wasn’t it? Thanks a bunch, T. ** JM, Hi, Josiah. Oh, wow. That’s very interesting about Snow’s impact on you. Fascinating. Very cool. Congratulations about the anthology! That is a really big deal, and you’re so right to feel elated and supported by that. Yikes, and fingers crossed, that your abusive ex-roommate gets the fix and you can head back there. You don’t sound arrogant in the tiniest degree, you sound elated. It’s a beautiful thing to observe. Okay, I’ll get Mike Corrao’s ‘gut text’, thank you, and I hope he’s on your work’s wavelength. I’m pretty good, thank you! Really good to see you, and more of the onwards and upwards. ** h (now j), Hi, pal. Thank you. I have not seen that new Snow film, no. I need to. I’ll search around. And I’ll hit those links as soon as I’m out of here. Everyone, h (now j) has some Michael Snow goodies for you if you are interested. (1) ‘In case you hadn’t seen this, here’s a DVD info of Variations where various artists interpret Snow’s poem (1957)’. (2) ‘And artist Ben Coonley who teaches at Bard and whose work I happily wrote about made Wavelength 3D back in 2002 and shared it here (which, “naturally,” requires red/cyan anaglyph 3-D glasses for proper viewing…)’. Thanks a lot! I hope NYC’s starter reopening goes very well for you. ** _Black_Acrylic, Cool, man. ** Misanthrope, Hi. Okay, but Wolf’s enthusiasm got me interested in his bbq sauce, so I might dip in that way. Gotcha on your clarification of the ‘experimental’ thing. Makes sense. ‘Experimental’ is basically my own personal equivalent of mainstream, I think. ‘Please forge ahead in your art and try to take me along,’ essentially. That’s kind of my starting point with art. What’s going on with your new, newly completed novel? You haven’t really mentioned it much in a bit. ** Bill, It’s very diggable. I’m still excited when I have a coffee at a cafe or walk in a store weeks later, so I get the thrill of that big time. And the feeling of fragility, which must be behind the thrill too. I’m always in the mood for ‘very harsh with multi-page paragraphs’, so I’ll try to find that book. Thanks, B. ** Steve Erickson, I really, really hope your phase 2 reopening goes as smoothly as possible and that it really is an interim phase towards the real world’s return. I hope NYC’ers don’t blow it, in other words. And I hope the newly available outdoors deep sixes that brain death. Seems highly possible. ** Okay. I’ve brought back an old post made by artist/d.l. Brendan Lott about the wonderful and perpetually under known band Oxbow, truly a singular and brilliant unit. I highly recommend their newest album ‘Thin Black Duke’, which was released after this post was made, and which I think has a kind of ‘Forever Changes’-level greatness about it. Enjoy. See you tomorrow.