‘My mum told me when I was a baby I slept so intensive so I turned white! So she had to check me all the time if I were still alive! This is serious! That is true! Maybe the whole thing started there? And maybe it started before that? My great great grandmother was a sorceror but only white magic. I have never been into fuckin white magic! I have always hated the Christianity and all faiths who had anything to do with God, but especially the Christianity. I want to get into a cult because it is difficult to understand something from a book with alot of scripts in Sumerian, Hebrew, etc. And it is very dangerous to do something wrong … So I need a cult. Thats another thing. But I must tell you, no one of us is normal.’ — Dead, 1990 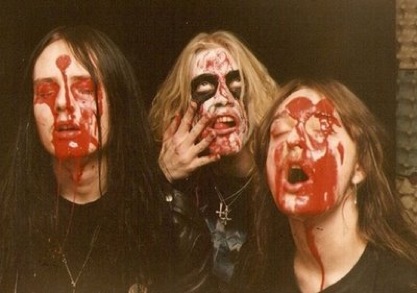 Per Yngve Ohlin (January 16, 1969 – April 8, 1991), better known by his stage name Dead, joined the pioneering Norwegian Death Metal band Mayhem when his down band Morbid folded in 1988. Serious illness as a child and a near death experience convinced him that he had died and was now a being from another world. His beliefs are preserved in the vampiric lyrics he wrote for the album De Mysteriis Dom Sathanas. Dead reputedly carried around the carcass of a crow in a jar and would inhale fumes from it before taking the stage so he could perform with the stench of death in his nostrils. He also took to donning a white greasepaint visage, designed to mimic the pallor of 13th-century plague victims.

Necrobutcher (ex-Mayhem): ‘It wasn’t anything to do with the way Kiss and Alice Cooper used makeup. Dead actually wanted to look like a corpse. He didn’t do it to look cool. He wouldn’t eat for weeks in order to get starving wounds. He would draw snot dripping out of his nose. He was the first black metal musician to use corpse paint.’

Bård “Faust” Eithun (Emperor): ‘He (Dead) wasn’t a guy you could know very well. I think even the other guys in Mayhem didn’t know him very well. He was hard to get close to. I met him two weeks before he died. I’d met him maybe six to eight times, in all. He had lots of weird ideas. I remember Aarseth was talking about him and said he did not have any humour. He did, but it was very obscure. Honestly, I don’t think he was enjoying living in this world.’ 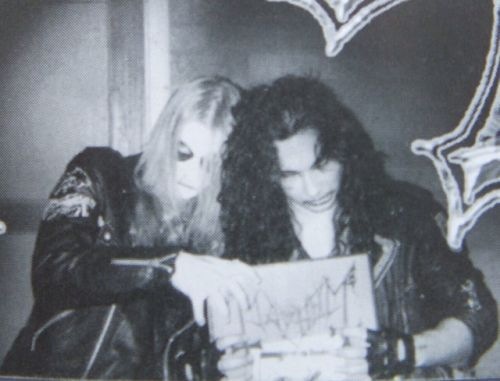 In order to complete his corpse-like image, Ohlin would bury his clothes before a concert and dig them up again to wear on the night of the event. According to bandmate Hellhammer, ‘Before the shows, Dead used to bury his clothes into the ground so that they could start to rot and get that “grave” scent. He was a “corpse” on a stage. Once he even asked us to bury him in the ground – he wanted his skin to become pale.’ Whilst singing on stage, Ohlin would often cut himself with hunting knives and broken glass. He claimed to be fascinated by people’s reactions to this. During one concert in Sarpsborg during February 1990, Ohlin cut himself so badly that he had to be taken to hospital due to blood loss.

When Dead first arrived in Norway, Necro Butcher took it upon himself to make sure their new singer had somewhere to live and was looked after. On the other hand, Mayhem founding member and chief songwriter Euronymous — later to become infamous himself when he was murdered by ex-Mayhem member and future cult hero Varg Vikernes (Burzum) — apparently did his best to make Dead feel uncomfortable. ‘He tried to psych him out,’ says Necro Butcher. ‘He would tell Dead, “We don’t like you. You should just kill yourself.” Stuff like that.’

And then, one day in the spring of 1991, Dead did just that. The members of Mayhem had moved to an old house in the forest in an area called Krakstad near Oslo to write and record their next album. Hellhammer claimed that Ohlin ‘just sat in his room and became more and more depressed. It would take twenty minutes to get from the house to the nearest shop, and we had to go by train to the nearest town. Teachers from the nearby schools told children: “Do not come up to this house. The house is haunted!” Everybody hated us, but we enjoyed it. One day I decided to go to Oslo with my friends. Before the departure I met Dead. He was grim: “Look, I bought a big knife. It’s very sharp.” Those were the last words I heard from him.”’ 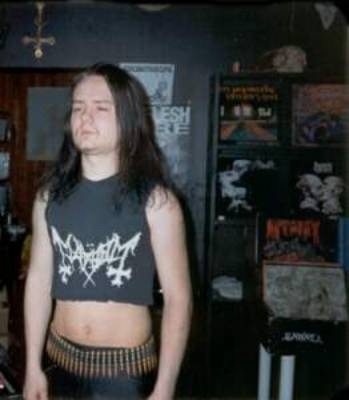 One day Euronymous came back to their house to discover Ohlin’s body slumped against a wall. He had slashed his wrists with a butcher’s knife and blown his brains out with a shotgun. His suicide note had a morbid humour . It read, ‘Excuse all the blood. Let the party begin’ and included an apology for firing the weapon indoors. Instead of calling the police, Euronymous hitchhiked to the nearest town and bought a disposable camera to photograph the corpse, after re-arranging some items. Later he called his bandmate Hellhammer: ‘“Dead went back home,” he told me. “Back to Sweden?” I wondered. “No, he’s blown his head.”’

‘He called me up the next day,’ recalled Necro Butcher, ‘and says, “Dead has done something really cool! He killed himself.” I thought, have you lost it? What do you mean cool? He says, “Relax, I have photos of everything.” I was in shock and grief. He was just thinking how to exploit it. So I told him, “OK. Don’t even fucking call me before you destroy those pictures.”‘ Several years later a lurid photo of Dead, lying in a shabby room in which the only splash of colour was provided by his blood, somehow found its way onto the cover of a Mayhem bootleg produced in South America.

‘Dawn of the Black Hearts’

Eventually, rumours surfaced that Euronymous made a stew with pieces of Ohlin’s brain, and made necklaces with fragments of Ohlin’s skull. The band later stated that the former rumour was false, but that the latter was true. Additionally, Euronymous claimed to have given these necklaces to musicians he deemed worthy, and it’s well known that several prominent musicians in the Black Metal field are in possession of skull fragments. ‘Police took Dead’s body but we lived in the house for a few more weeks,’ Hellhammer explained. ‘Dead’s blood and pieces of skull were all over the room. Once I looked under his bed and found two big pieces of skull. I took one piece and Euronymous took the other. We made amulets out of them. Later on we lost them somehow. Somehow others have them now. It’s strange …’

Necrobutcher: ‘The Black Metal scene was just growing and we were doing what we were doing up until 1991 when our vocalist (Dead) killed himself. After that, it all started to happen. Some people became more aware of the scene after Dead had shot himself. After that, churches started to burn and it just went crazy here. I think it was Dead’s suicide that really changed the whole scene. I think (his suicide) was a very fortunate situation to happen, and I think the scene would still be around and gone in the same direction as it had, maybe just a bit later on. I don’t think it would have become as extreme as fast as it had in black metal. A lot of young musicians got into this scene because it was the most aggressive and violent scene out there at the time.’ 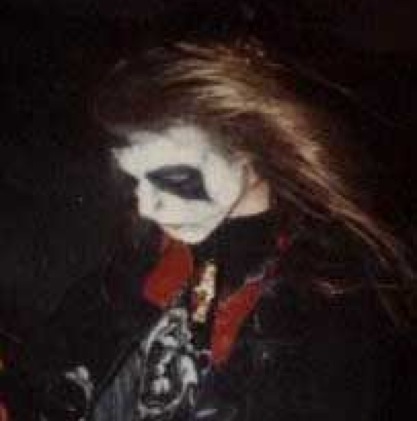 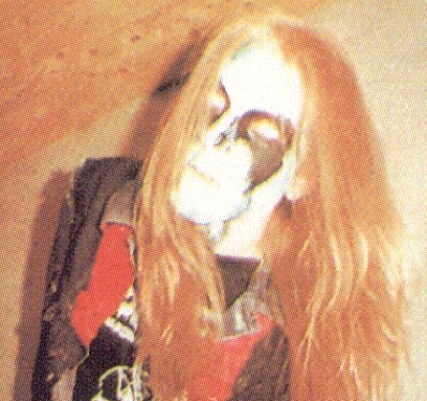 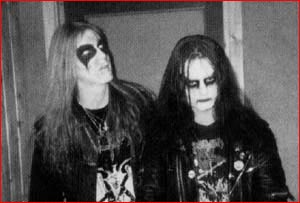 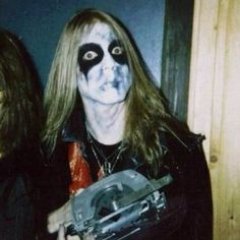 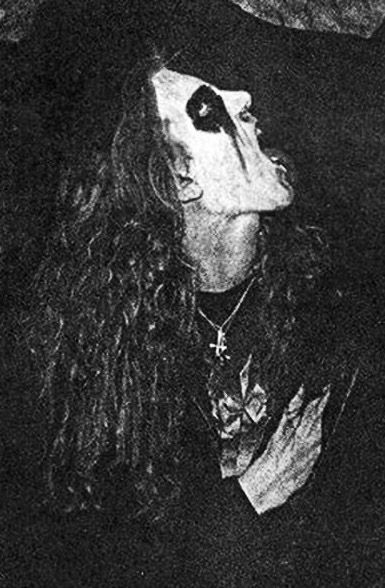 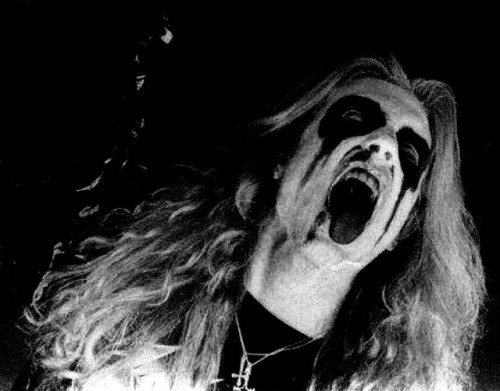 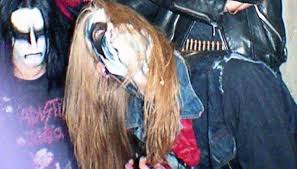 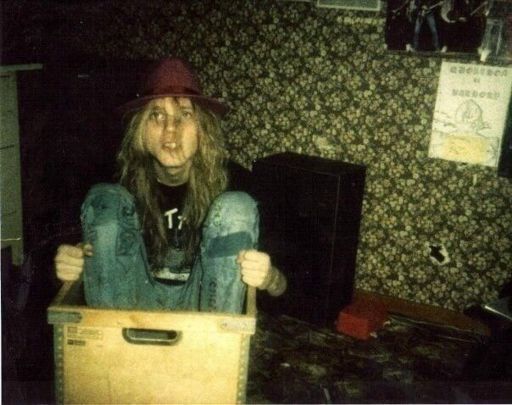 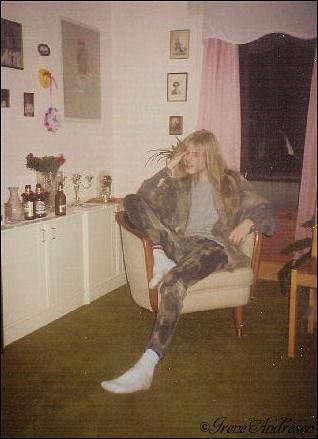 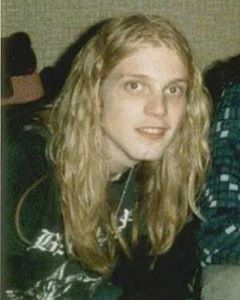 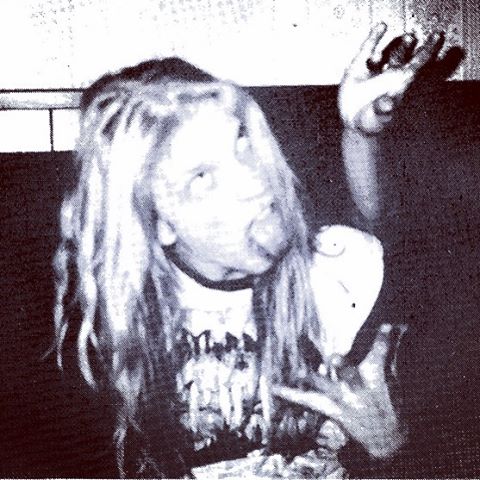 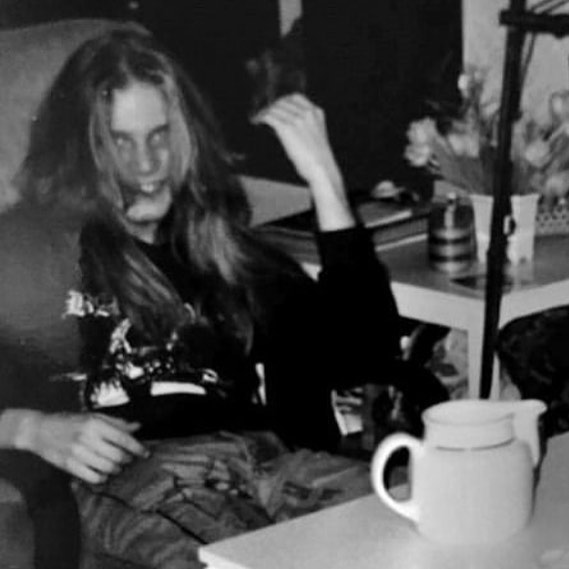 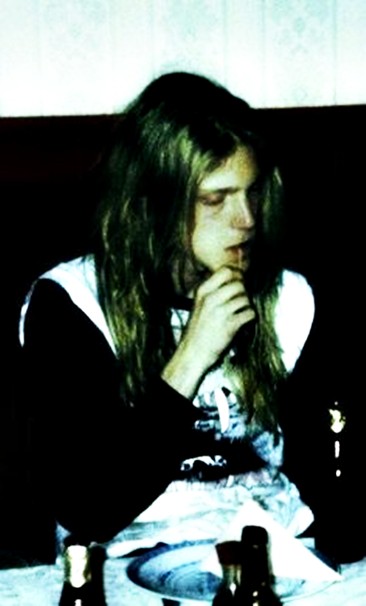 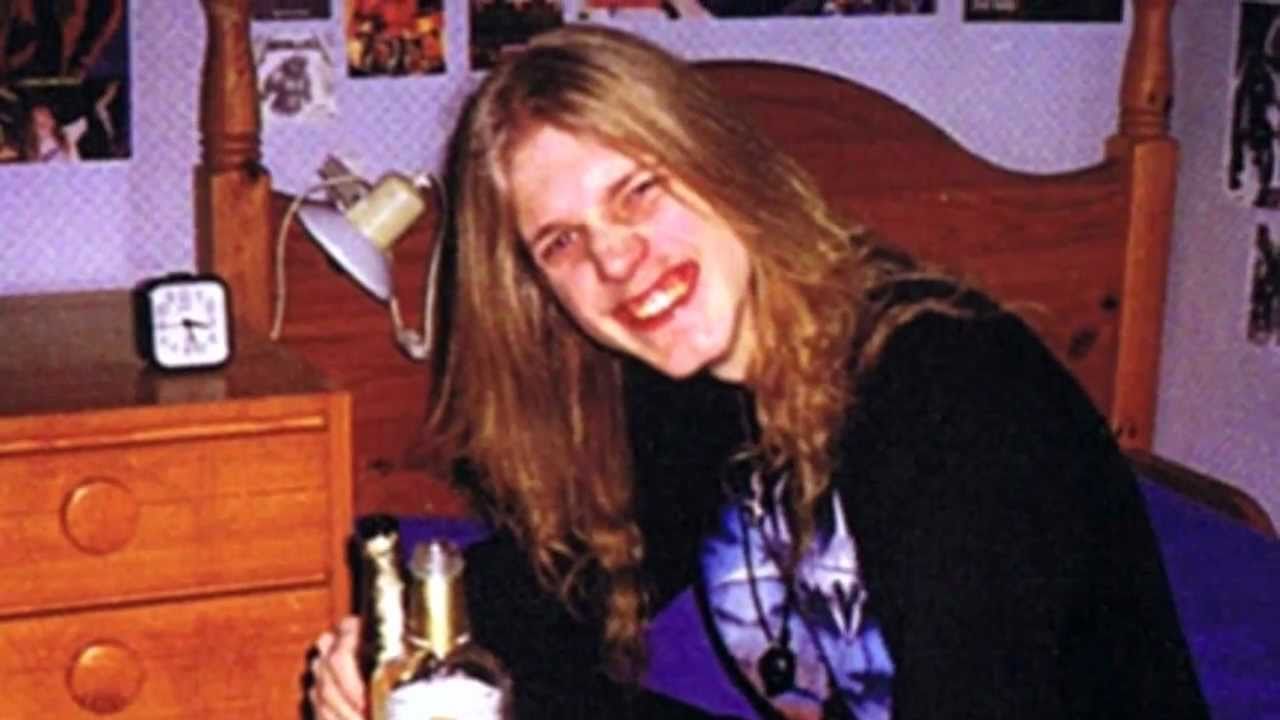 The grave of Euronymous (video)

Dead walking outside the house in Krakstad

p.s. Hey. To those who are interested, PERMANENT GREEN LIGHT is now available in North America (and elsewhere, if you have the capability) on DVD/BluRay! You can buy the BluRay here, and you can buy the DVD here. Both versions include the film (with English or Spanish subtitles), an exclusive interview with Zac, DP Michael Salerno and me, a tour through ‘Roman’s’ notebooks (featuring art by Kier Cooke Sandvik), and a compilation of the film’s various trailers. Thanks! ** JM, Hey, man! Great to see you! I hope all’s well. Super interested to hear your whats and wheres whenever the time on your end suits. ** David Ehrenstein, That is so true. ** Dominik, Hi, D! Thanks a bunch. Have a spectacular, splendid, and sensorious (that’s not a word?) time with Anita and Prague! I look forward to hearing all about everything. Love, me. ** _Black_Acrylic, Hi, Ben. I saw your email upon drowsily awakening, and I’ll get to it and then get back to you today. Thanks, man! ** Misanthrope, Hi. Well, sure, in the sense that any translation has to take liberties with the original to be able to work as closely as possible to how it originally did in a very different language. And some works translate smoothly, and others lose a fair amount. But, I mean, I spent my ‘formative’ years reading something like 80+ % novels and poetry in translation, and it was a glorious and life/work changing experience, so … Cool, the car scene in PGL is probably my favorite scene in the film, if I had to choose, so good eye there on Joe’s part in my humble opinion. Yep, I have gigantic wads of encouragement over here that are fully available to LPS should he need the oomph and if that helps. ** Steve Erickson, Hi. Well, you know the drill: if it doesn’t work or if you don’t have it in you, change strategies, I guess. But I say give it the old college try. You might well surprise yourself, and stretching one’s talent, successfully in the long un or not, is how progression happens or whatever. I haven’t seen ‘Under the Silver Lake’. I had a certain interest in seeing it when it was at Cannes and got such divisive reviews, but everyone I know and trust who’s seen it said it’s just unbearable in the kind of ‘Southland Tales’, ‘Neon Demon’, etc. overblown, self-conscious, faux-maximalist way that I generally can’t stand. So I don’t know if I’ll see it. Probably not. I thought ‘It Follows’ was overrated, so there’s not that ‘in’ to nudge me either. What did you think of it? ** Nik, Hi. My favorite Simon is ‘Tryptich’, but it’s an intensive read, being a novel that consists of three meticulous ‘pans’ through the same room. But he’s pretty regularly fantastic. Yeah, whatever strangeness and compulsion was fueling Anger’s earlier films doesn’t seem to exist in him anymore. And the new ones make you realise that it was that inner thing, whatever it was, that made those things so great. Ha ha, that’s hilarious about the ‘Game of Thrones’ theater invaders. I’m good, busy, nervous, etc. But good. Thanks about the release day thing. Yes, as stated at the top, it’s out on DVD and BluRay right now, and streaming/VOD options should be coming soon. Thanks, bud! ** Okay. Today’s restored post is quite old, so old that I have no idea who its maker, Baphomet’s Bongos, is or was anymore. If you’re out there, BB, thanks again. The rest of you enjoy, if that’s the word, this delve into Dead. See you tomorrow.