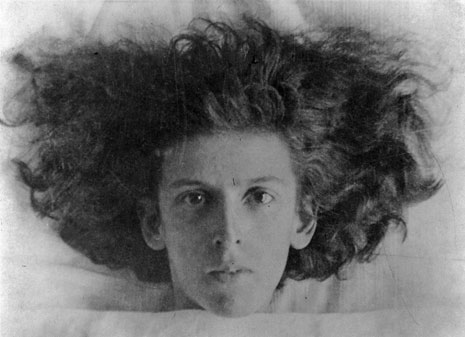 In a discomfiting series of self-portraits rediscovered in the 1980s – most of them apparently produced in the 1920s and 1930s with the assistance of Marcel Moore, the lesbian companion with whom she lived as a recluse on the island of Jersey between 1937 and 1954 – the wildly androgynous artist can be seen vamping it up in a boggling array of cross-sex get-ups.

In one photo the mercurial Cahun impersonates a bald semi-human creature with a conical skull; in another, a crew-cut blond Narcissus floating naked in a Jersey rock pool. Elsewhere she’s a Jazz Age aviator in cravat and huge round goggles; a hairless albino with two heads; a dapper Baron de Charlus-style boulevardier; a shiny and querulous-looking Buddha. Cahun never breaks role or smiles; the effect is at once fey, deadpan and disturbing.

At the time of their rediscovery the Cahun photographs – so droll yet so peculiar – seemed to have come out of nowhere and even now they retain a dateless, uncanny, hermetic quality. Many appear to have been taken inside La Rocquaise – the large and dilapidated Jersey house Cahun and Moore shared – or else on a nearby rock-strewn beach.

Why – or how – Cahun and her companion made these images remains mysterious. 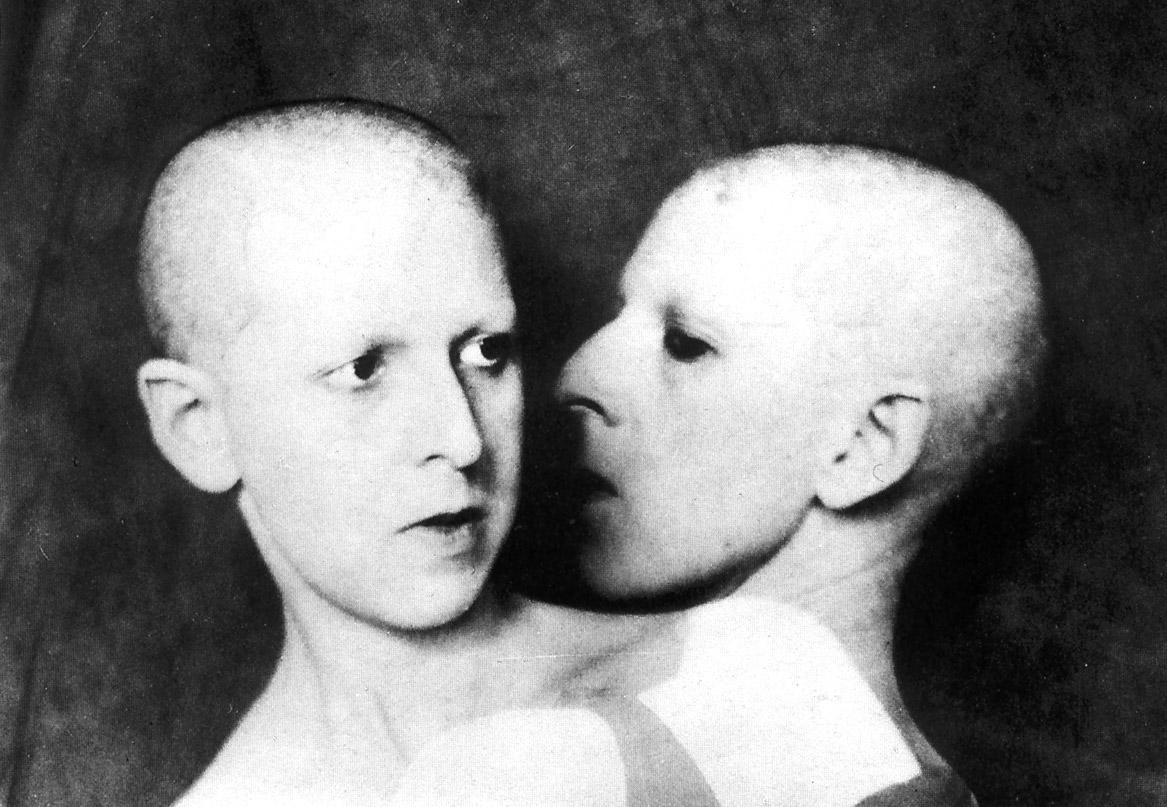 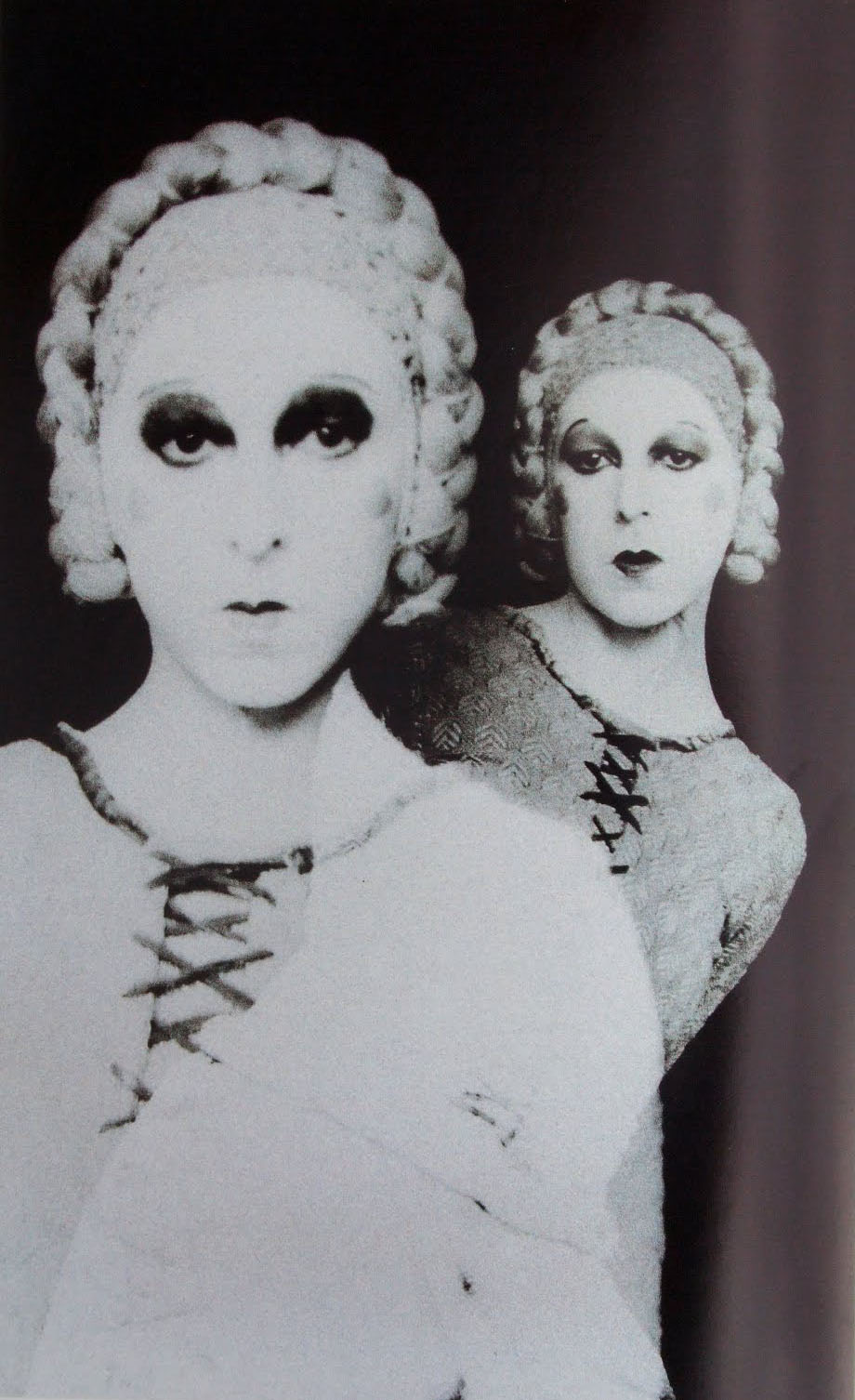 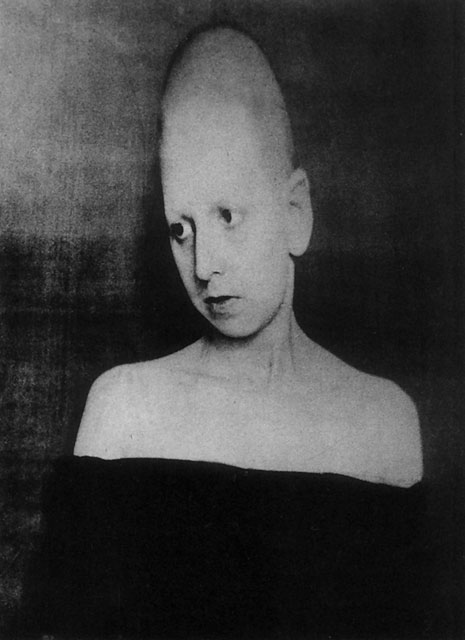 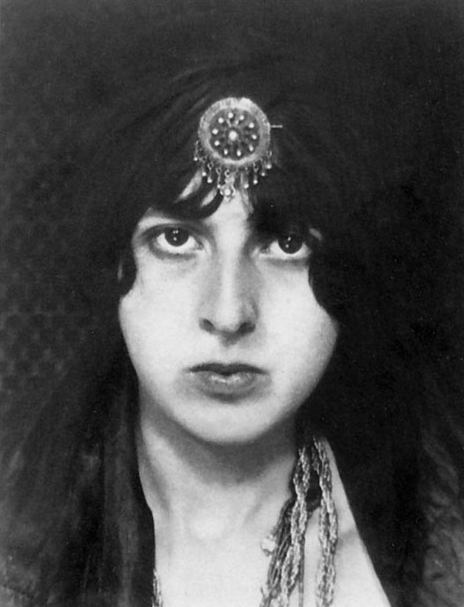 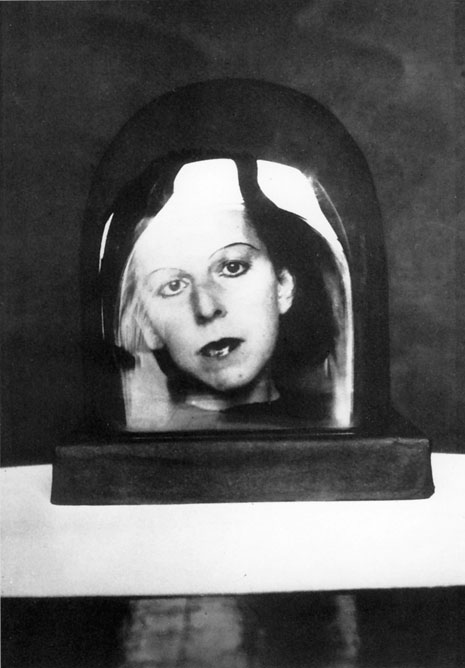 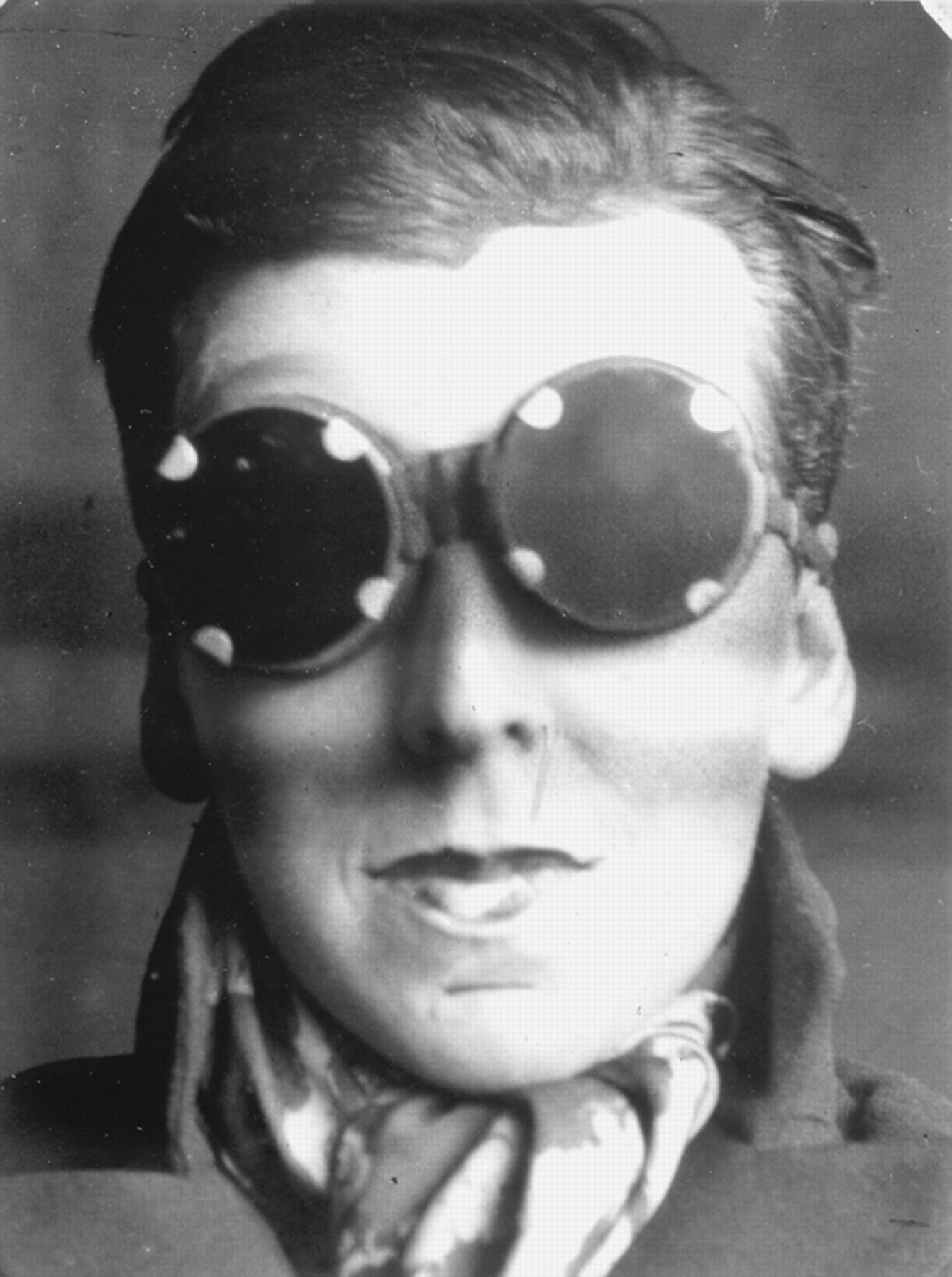 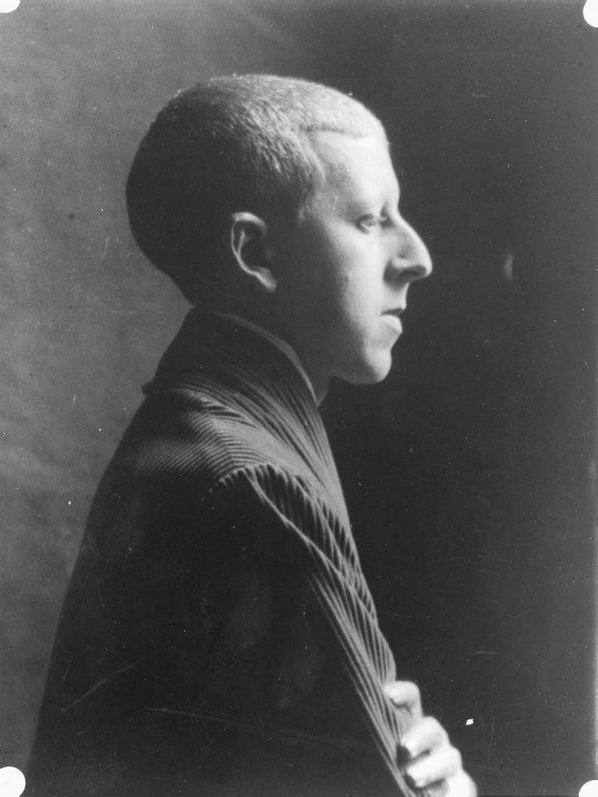 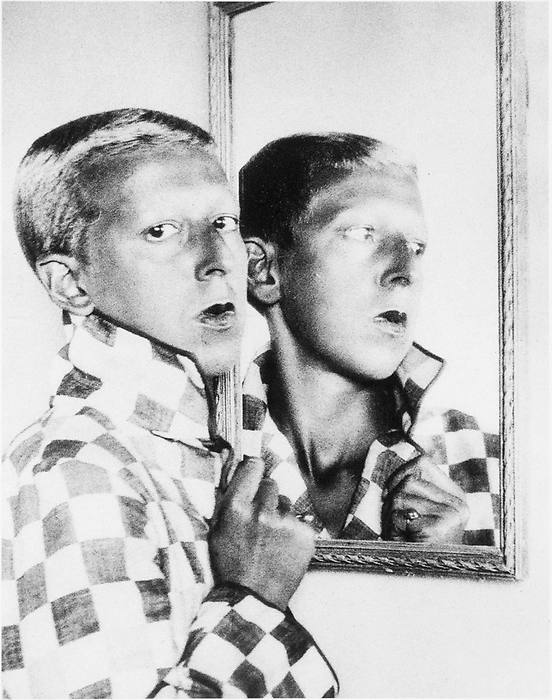 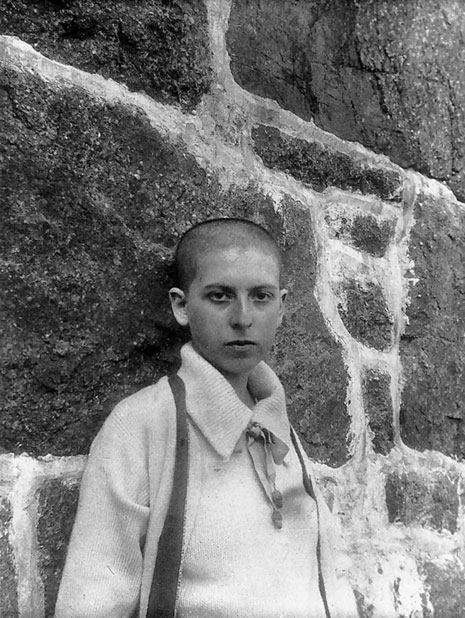 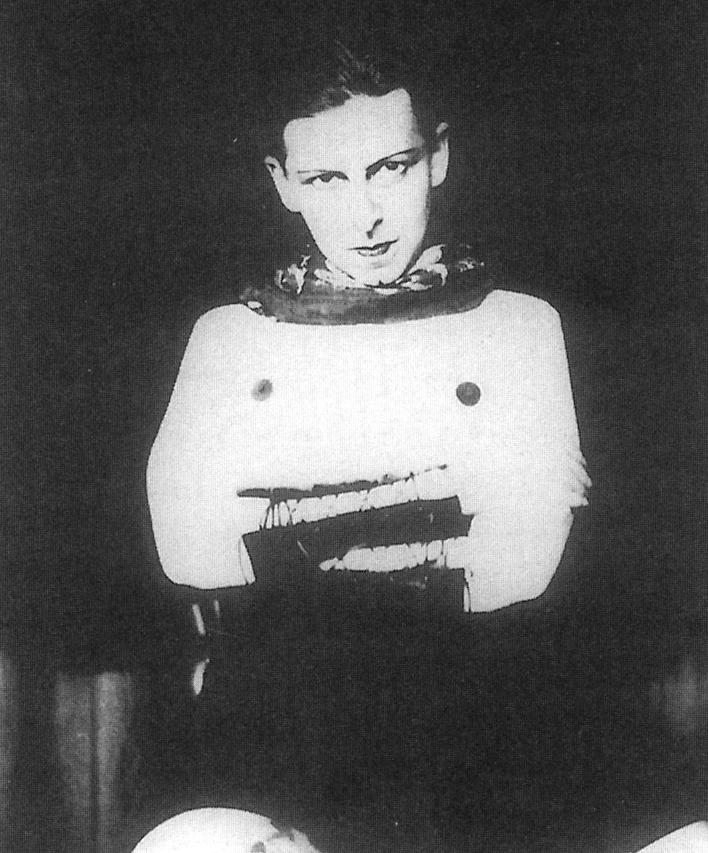 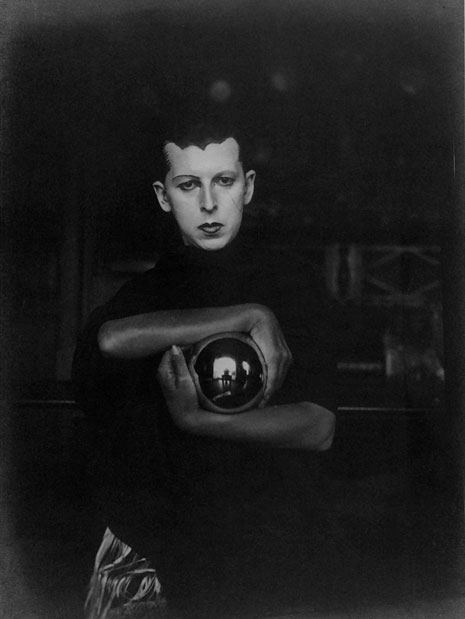 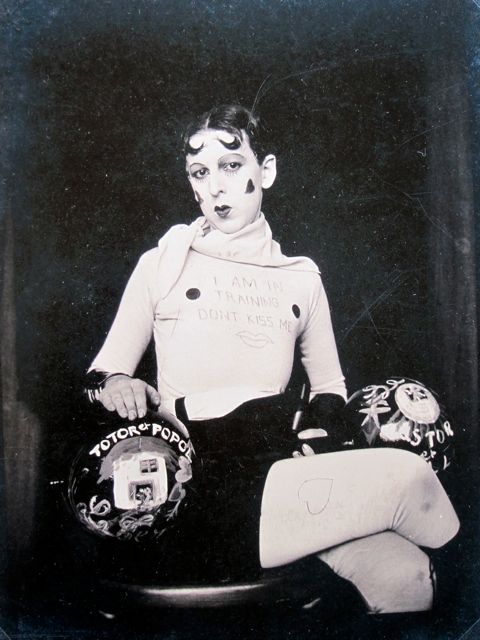 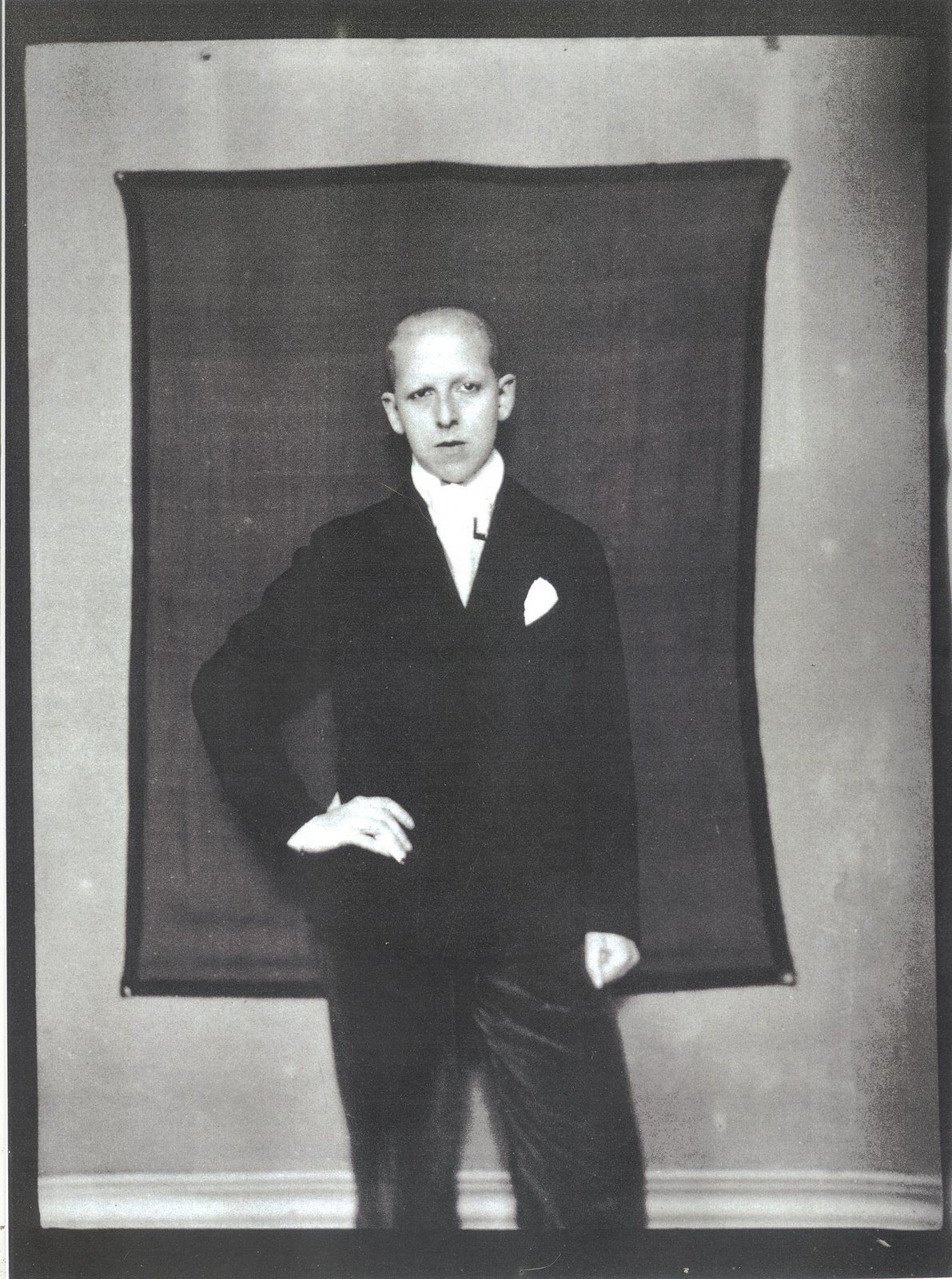 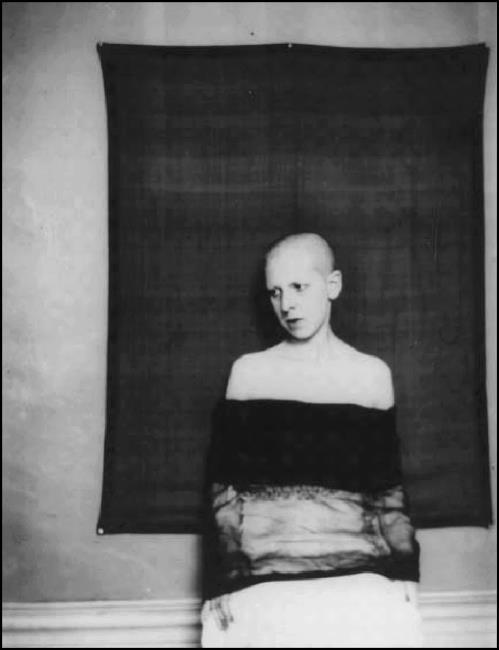 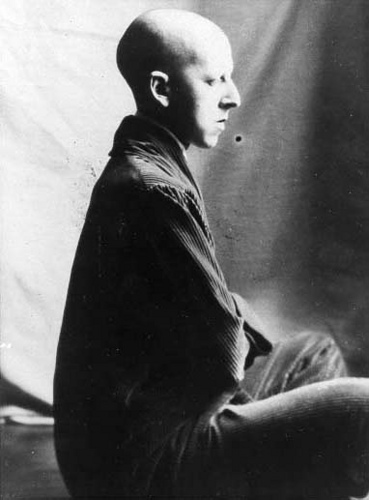 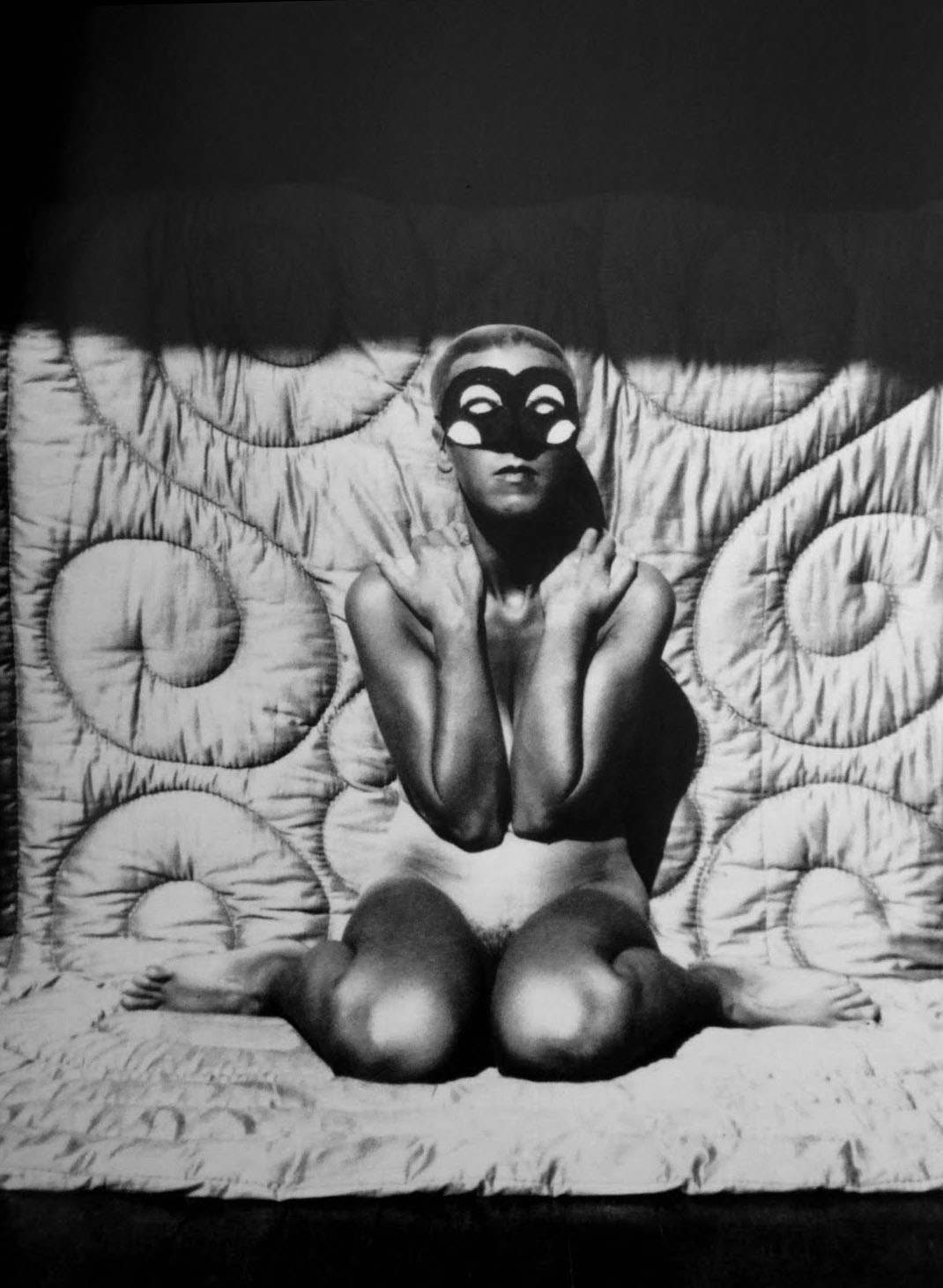 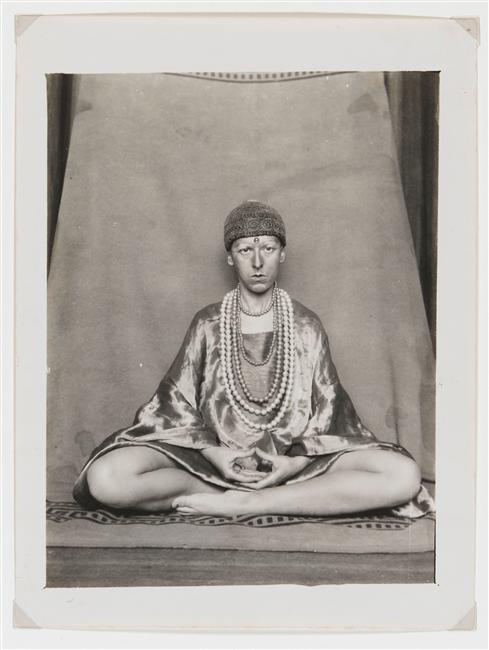 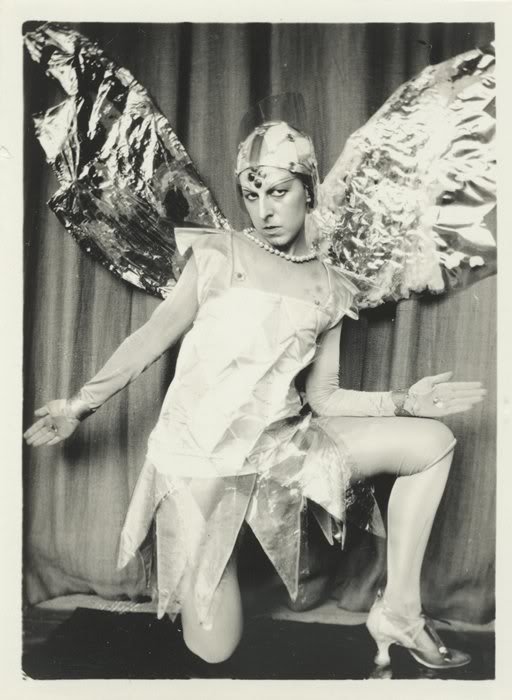 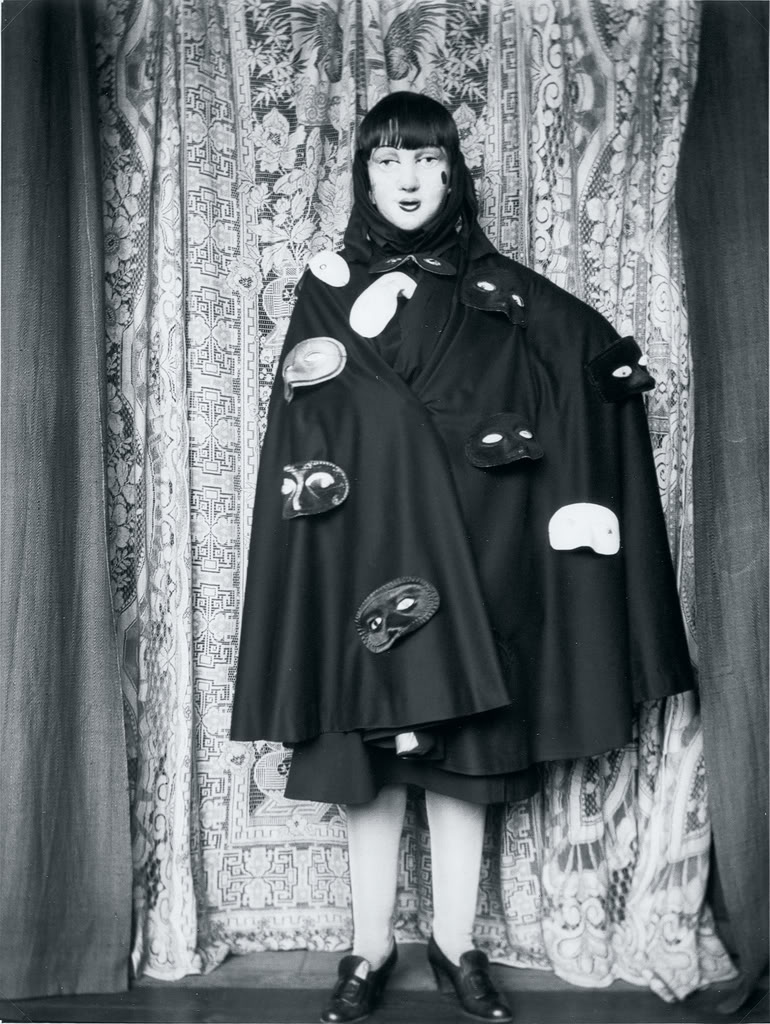 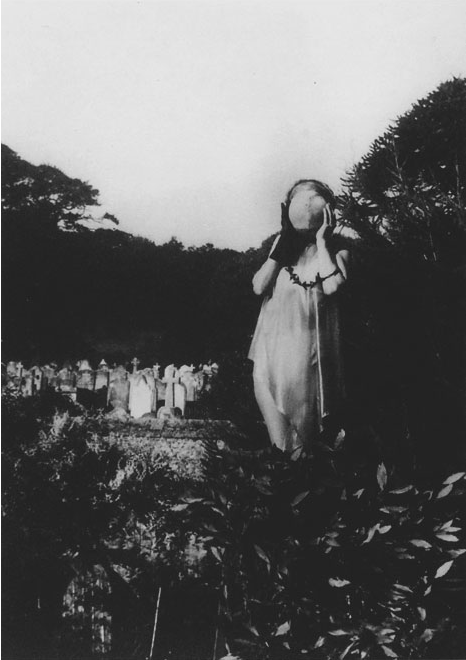 p.s. Hey. ** h (now j), Hi. Well, my pleasure, of course. And thank you, and take good care. ** Misanthrope, I can definitely see you liking Purdy’s work. I should try that Zinc thing. I’ve meant to. I so rarely gets colds or flus or sick at all, so I forget, but … Really, my guess was right? Cool, strange, logical though. ** David Ehrenstein, Yep. I think ‘Eustace Chisholm …’ is my favorite of his novels. I didn’t know Albee had adapted Purdy. Theater in the old fashioned sense is a weakness of mine. Huh. ** Sypha, Hey. Oh, yeah, what I think I meant was I didn’t remember you talking about the actual novels as opposed to this or that sequence/detail in them. ** chris dankland, Hi, Chris. Cool, happy to hit one of your zeitgeists. Yes, Don Weise ran the publishing house Carroll & Graf that published ‘The Sluts’, and he’s who made that happen. Really nice guy. I didn’t realise he’s an agent now. If you remember, and if Jennifer wants to, please tell Don I say hi. I think I remember him telling me about his deliveries to Purdy. I did meet Purdy a few times, but my interactions were pretty limited. He seemed nice, interesting, intense. A lot of my writer friends back in the 80s knew him fairly well, and he had a rep through their reports and I think in general of being pretty prickly and bitter, but I didn’t find he had that vibe in my short encounters with him. Why Purdy isn’t more read and considered a more central writer has been a big question for, gosh, decades. Beats me. I lived in Holland for a few years, as I think you know, and he was considered a really major writer there. He was written and talked about a lot. I’m not sure how he’s regarded here in France. I should ask people. I would imagine he’s held in higher regard here than back home. It seems strange if the ongoing neglect is due to him having been a difficult guy. Surely there are some total assholes among the writers who are considered to be top dogs. Yeah, I don’t understand it. There is a prejudice against work that overly dark. But then … Cormac McCarthy. And maybe his gayness is some kind of strike against him in the US? But yes, being canonised by the lit. establishment is hardly an indicator of a writer’s greatness or lasting value/influence, that’s for sure. Is there no Purdy biography? That is very strange. I’m very surprised by that. Anyway, I’m so happy the post was inspiring and a soul mate for you. Have a lovely one, man. ** Steve Erickson, Ah, so it begins! There’s been COVID visual art showing up for weeks now. Great about the interview! I didn’t know that Trouser Press has returned. Wow. Are the same people/person in charge, and or is it more tangential and they’re just kind using the brand name? ** Nik, Hi. I hope people get in touch re: that project too. Super great opportunity. I know Dennis Lim is going to be somehow in charge of the NYFF, but I don’t know if he already is for this edition. Well, I will say diminishing the experimental film section by mushing it in with shorts is not a good sign at all. Really, they should give experimental film a wider berth with multiple sections given the current experimental film renaissance. But oh well. I’m not really worried about the coherency falling apart here. It’s more the doomy if guess-work-like threat of the now legendary Second Wave that’s daunting, what with some scientists saying it’s inevitable and others saying not necessarily at all. But, no, I was out all day yesterday looking at art, and the city is full of life and people, and other than a few packed cafes I passed, everyone is sticking to the rules. It’s gotten so you just distance/mask/wash without even thinking much about it. Fingers crossed. And extremely crossed for you guys over there. It just feels so apocalyptic over there from over here. Thanks for asking about the GIF work. Well, it’s in process, but, at the moment, it’s 10 sequences, each on its own small computer screen, individually framed, matted, hung on the wall in a row. So no hands-on viewer interaction. They would just cycle through their things forever. It’s not a narrative work, more associative, more like a poem, in a way, I guess. And more kind of abstract, although it involves almost nothing but figurative gifs. Not sure. Definitely a bit different. Like I think I said, I want to see what the potentially interested gallerist has to say about them. I hope you got the essay finished to your satisfaction, and, obviously, enjoy the beach! xo ** Right. Today I’ve restored a quite old, beautiful, simple but subterraneous post made for the blog by the writer and former blog regular Alan Horn. I hope you will eyeball it and enjoy. See you tomorrow.