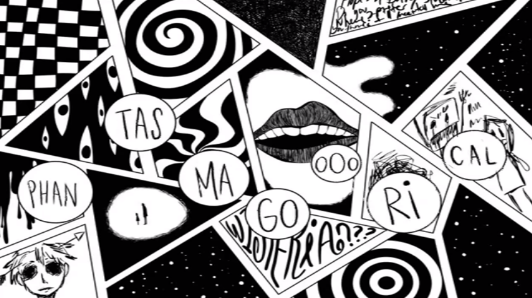 My introduction to VOCALOID was through the eclectic Teen Witch zine’s coverage of “cyber idol” Hatsune Miku and her hologram concerts some years ago. VOCALOID consists of YAMAHA’s multitude of software of synthetic voicebanks and the accompanying character mascots depicted on box art and promotional material, fueling endless creativity by users of the software and inspiring the creation of fan art and animated videos.

The aquamarine, pigtailed Miku, “an android diva in the near-future world where songs are lost,” is undoubtedly the most famous VOCALOID and generally the only one that people outside of the community are aware of. However, there are more than 60 VOCALOIDs altogether, with language-specific voicebanks including Japanese, Chinese, Korean, Spanish, and English. Some VOCALOID voicebanks are provided by famous musicians and voice actors (such as jrock/pop idol Gackt for Gackpoid) while other voice providers have been left anonymous. 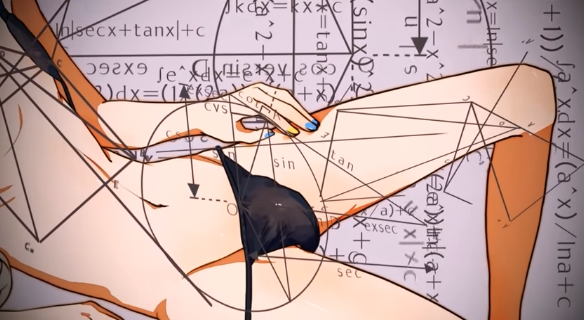 Since anyone with VOCALOID software can create songs using these voicebanks, there are thousands upon thousands of VOCALOID tracks in existence. Separating the wheat from the chaff is no easy matter. For your viewing and listening pleasure, I have curated a selection of eight music videos and tracks pertaining to the boys of VOCALOID and some of the more complex or bizarre themes I’ve come across in my travels, followed by some honorable mentions and further links. Most have been voiced by masculine providers to begin with though there are also a few surprises in store.

“Entering an unscrupulous terms of service, plaster me with “I love you’s” / Decide on my eight point love valigarmanda … Don’t come to hate this dreamy boy … Pick me up, I’m solid, absolute monarchy” (Lyrics)

“The price is labelled long ago / come possess me, at this second / The waist is twisting like a water snake…everything outside the camera can be thrown away” (Lyrics)

While this track is sung by Chinese VOCALOID Luo Tianyi — a feminine voicebank — the video depicts a genderswapped version of the character in a submissive but pushy, bratty role as an alluring but “poisonous” pop idol. Catchy and with lyrics dripping with opulence, this is my favorite of the bunch.

A frantic, circus-like English VOCALOID track with themes connected to trypophobia (fear of holes) and the brain’s innermost fears manipulating consciousness like a puppeteer.

“Little children went astray / In the sunny soil beneath, / Wriggling worms in disarray. / Hear them laughing underneath.” (Lyrics)

Released in time for Halloween in 2014, the eerie, sing-song track with music box chimes is about American serial killer Albert Fish. From the VOCALOID Wiki: “The VSQX (VOCALOID sequence file) riddle was solved after by milkyflandre…an image of Albert Fish [was] hidden in the audio of the song.”

One of the more controversial VOCALOID tracks out there, “Gay Sex” comes off as a puerile joke with blatantly explicit lyrics and the utilization of OLIVER, whose voicebank was originally provided by a 13 year old British boy. According to the VOCALOID Wiki, however: “The author’s actual purpose for writing the song was not as a joke, but as a psychological experiment. They commented that this particular song has gotten more views, likes, and dislikes compared to their other songs which [weren’t] as explicit in content, stating that the results astonished them.”

An energetic eletro track all about remote-controlled vibrator-assisted orgasms on a night out. The music video features a prominent Greek letter theta (the “big O”?) swirling around along with the word “yes” and a strangely lengthy explanation of theta’s meanings at the end. 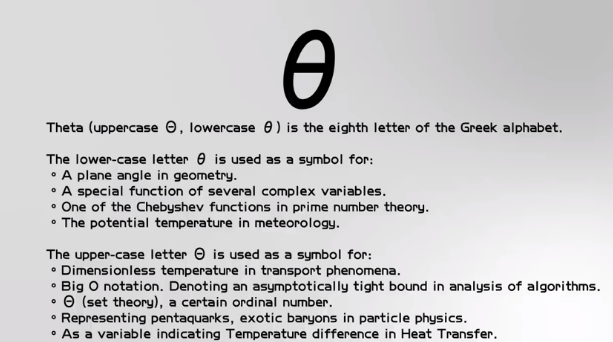 “A perfect tea time a virgin to toasting / A new page is being carved, even today I tear away the annoying prey / Come, do as you like / With these phantasmagoric cat-ear archives” (Lyrics)

VOCALOID KAITO appears here as a catboy (nekomimi) romping around a festively traditional Japanese enclosure replete with cat masks and hanging lanterns. KAITO’s nasally voice spouting off rapid-fire lyrics, his playful feline gestures, the multitude of outfit changes from teal kimono to shirtless and sporting regrettable plaid capris…all of these ingredients come together to create a so-bad-it’s-good, psychedelic nightmare effect. 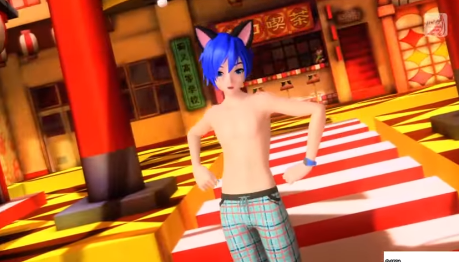 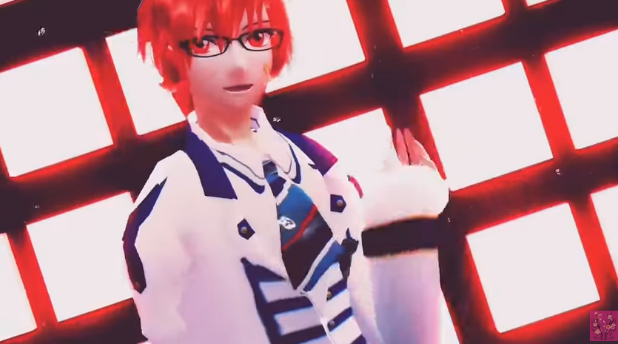 “This absurdity would not go away. / I’m wearing my school swimsuit. / As I spew out vomit, maybe I need to defragment my wild fantasies. / Because I didn’t keep my eyes on the road, my face is now badly injured. / I don’t really care anyhow. I just want to eat some macarons.” (Lyrics)

Originally a Hatsune Miku and GUMI duet (“Spinal Fluid Explosion Girl”) in 2012 and the inspiration for a 2015 movie of the same name, this cover is performed by VOCALOID ARSLOID and UTAUloid Kasane Ted (UTAU being a freeware application similar to VOCALOID). The gross-out lyrics are interwoven with technology (“Google has made me realize how uninformed I actually am. / My ultra-thin Japanese smartphone’s contract will be up after 2 years.”) and sex (“apparently even the nonchalant asexual boys / will let themselves be loved by me”). 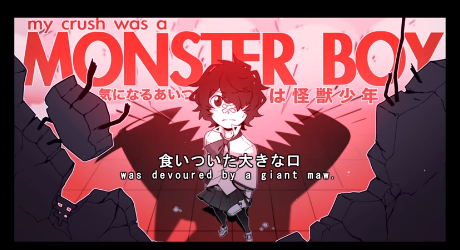 Fukase – “気になるあいつは怪獣少年” (My Crush Was a Monster Boy)

“Having followed my crush, I witnessed his secret / The popsicle thrown into the air, it was devoured by a giant maw;” (Lyrics) 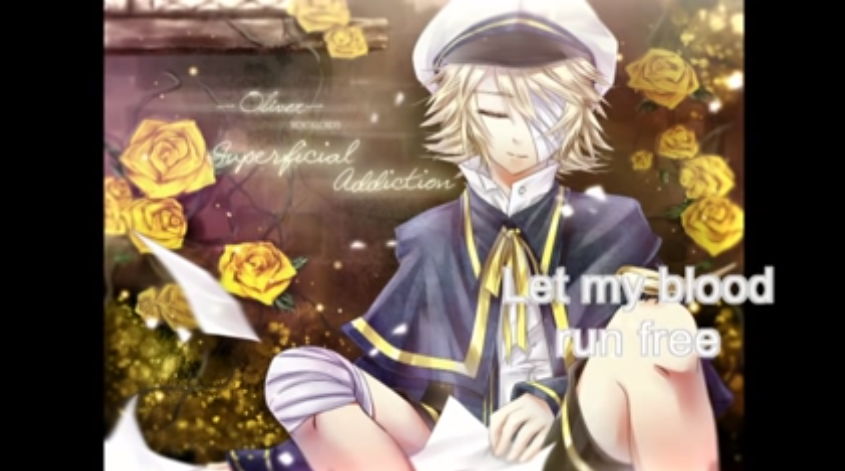 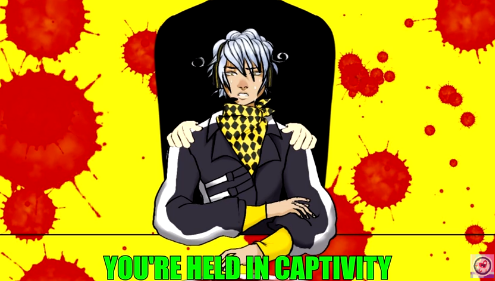 “MY FUTURE SEEMS SO TOXIC / I CANNOT STOP EATING” (Lyrics) 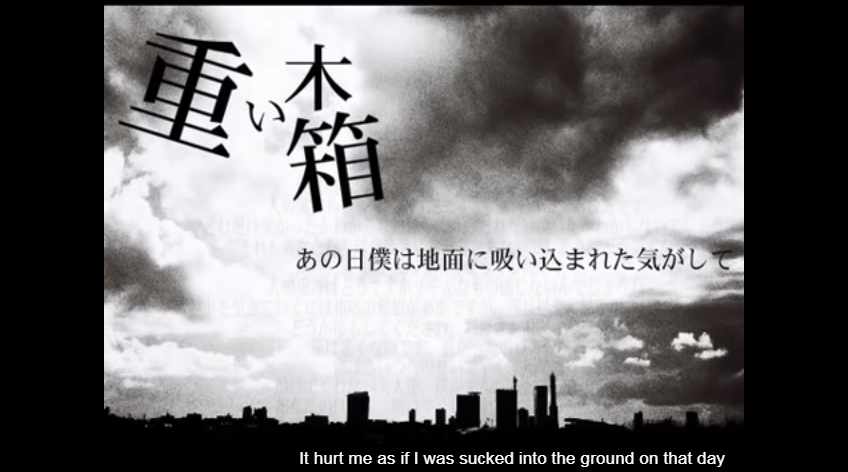 “They put me in a casket right in front of my eyes / The box was dragged, burnt and is becoming smoke” (Lyrics) 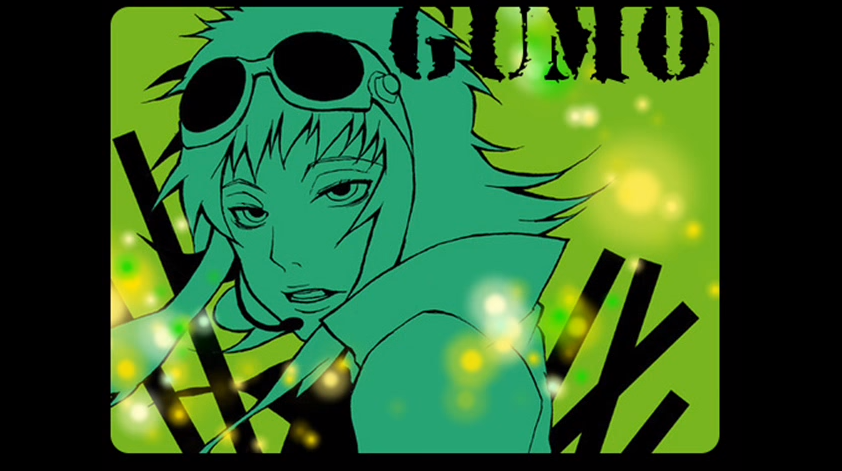 (The pitch-shifted, ‘masculinized’ version of GUMI is known by fans as GUMIYA or GUMO)
“Ever on and on, I continue circling / With nothing but my hate in a carousel of agony” (Lyrics)