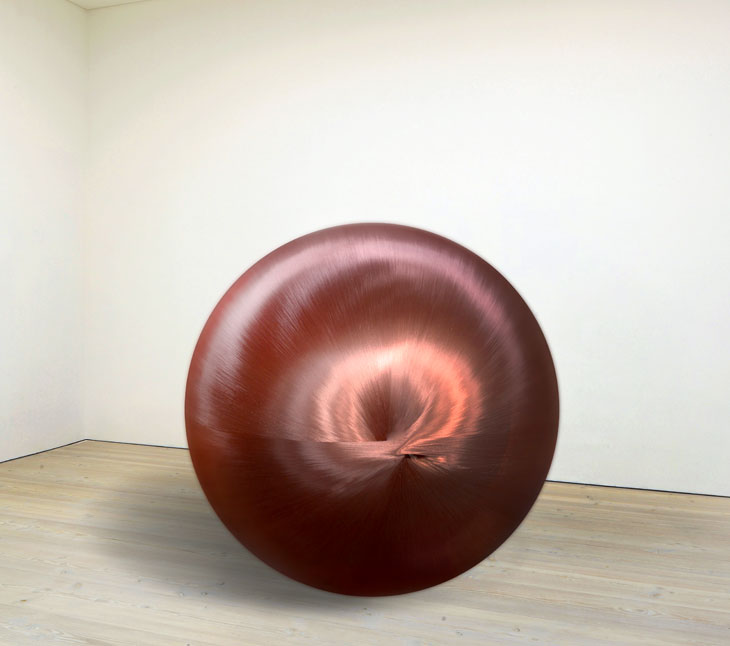 _______________
Lyota Yagi Sound Sphere (2011)
An installation consisting of cassette tape wound around a spherical object and a device to play its sound. There is no start nor end of the tape on the sphere and it continues to move randomly, emitting noises. Varying sizes of globes are covered with a length of time that is proportional to their surface area. When linear time is wound around a sphere, it is deprived of the relationship between place and time, and thus also loses its meaning (or in other words, causes meaning to arise). Temporal relationships are a decisive factor in the recording of sound. 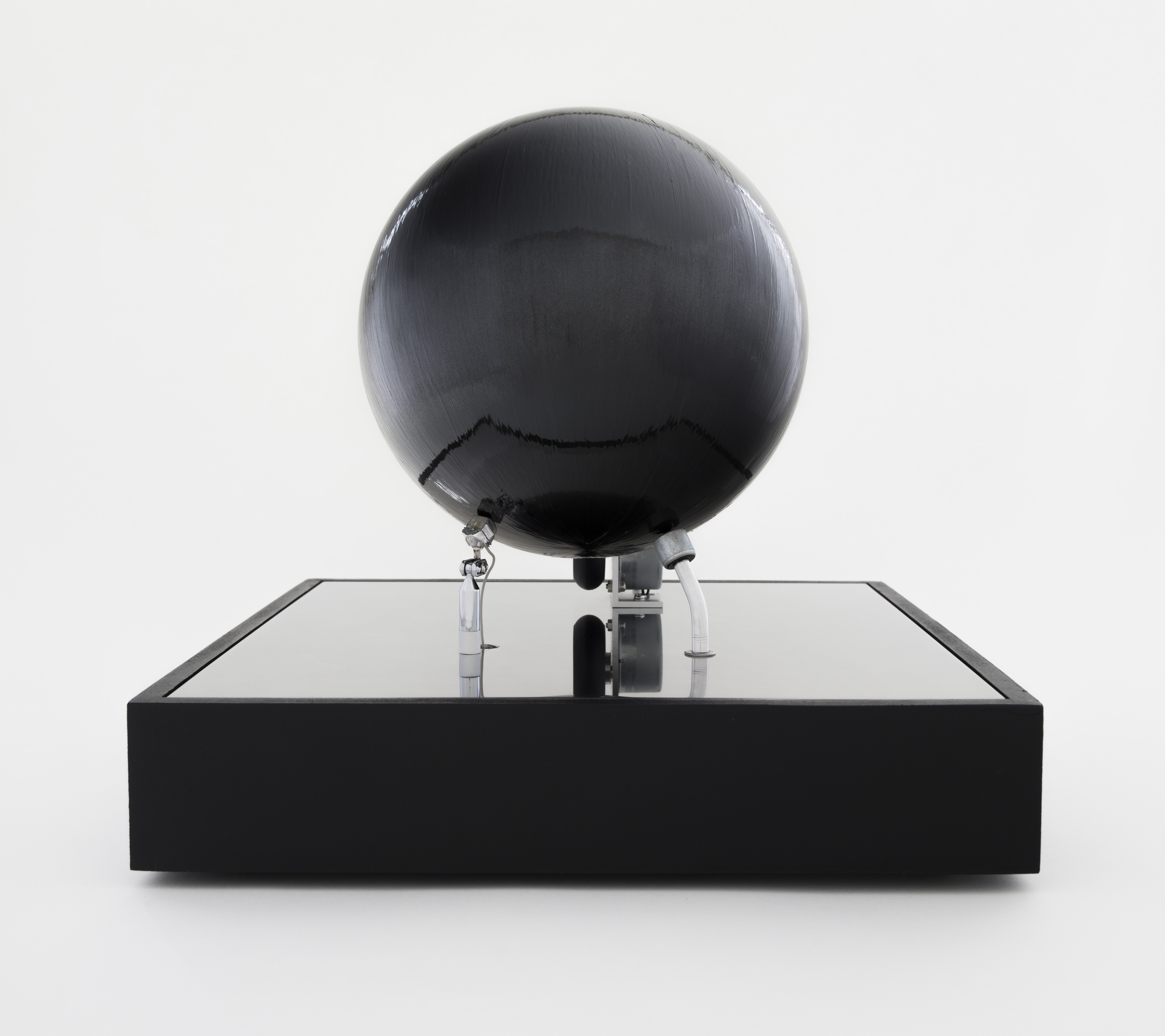 _______________
Karina Smigla-Bobinski ADA (2011)
ADA – Analog Interactive Installation, is a kinetic sculpture by German-based artist Karina Smigla-Bobinski. The installation is made form an enormous helium-inflated sphere trapped inside a small room that’s spiked with dozens of protruding charcoal pieces which scrape the edges of the gallery wall as participants push, toss, and otherwise manipulate it.

_______________
Helen Pashgian Untitled (1970)
Helen Pashgian uses industrial materials such as polyester resin to create objects with luminous effects, which has led her work to be considered part of the Light and Space movement that developed in Southern California in the 1960s. Light and color seem suspended in the spherical form of this untitled work, but they also exceed the boundaries of that form. As the viewer moves around the piece or as lighting conditions in the gallery change, colors meld and reflections shift, destabilizing the boundary between the interior of the sphere and its surface. Pashgian’s cast spheres, like other minimalist works, focus attention on the viewer’s perceptual experience, but they are also highly enigmatic objects that seem to glow with their own life. 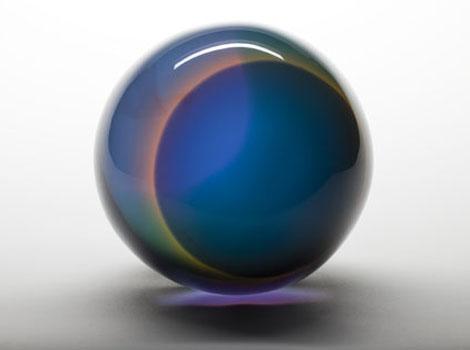 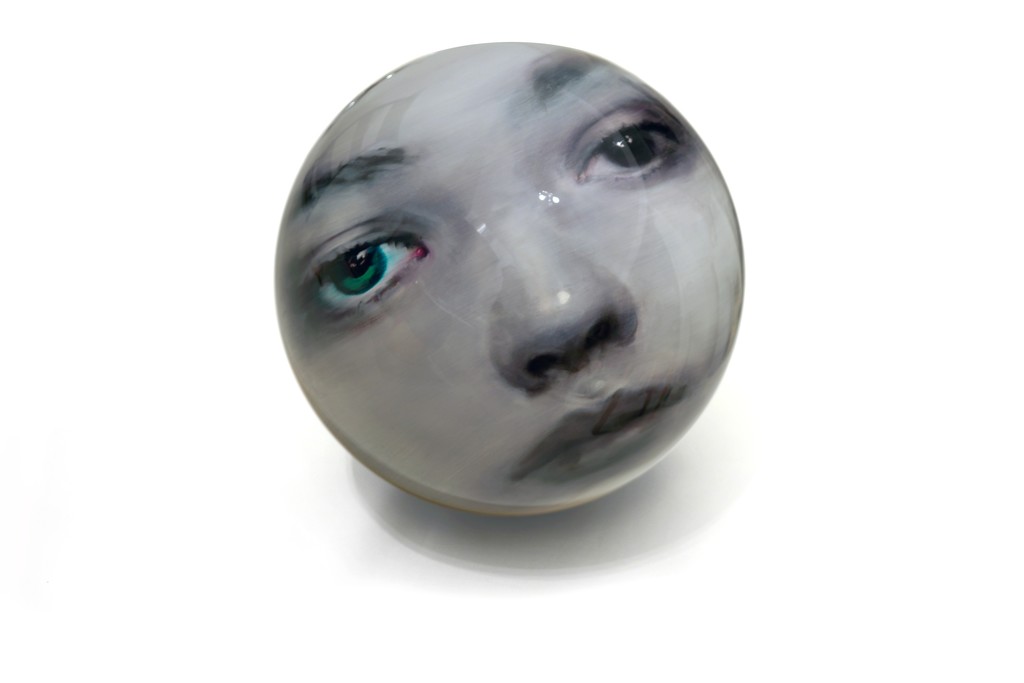 _____________
Jeppe Hein Spinning Ball (2008)
Sitting on a white plate, a reflective steel ball spins fast around its own axis. Appearing motionless from afar, the movement is only visible upon closer inspection. 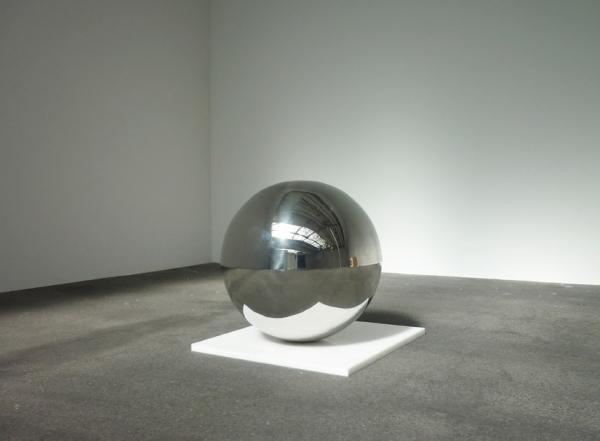 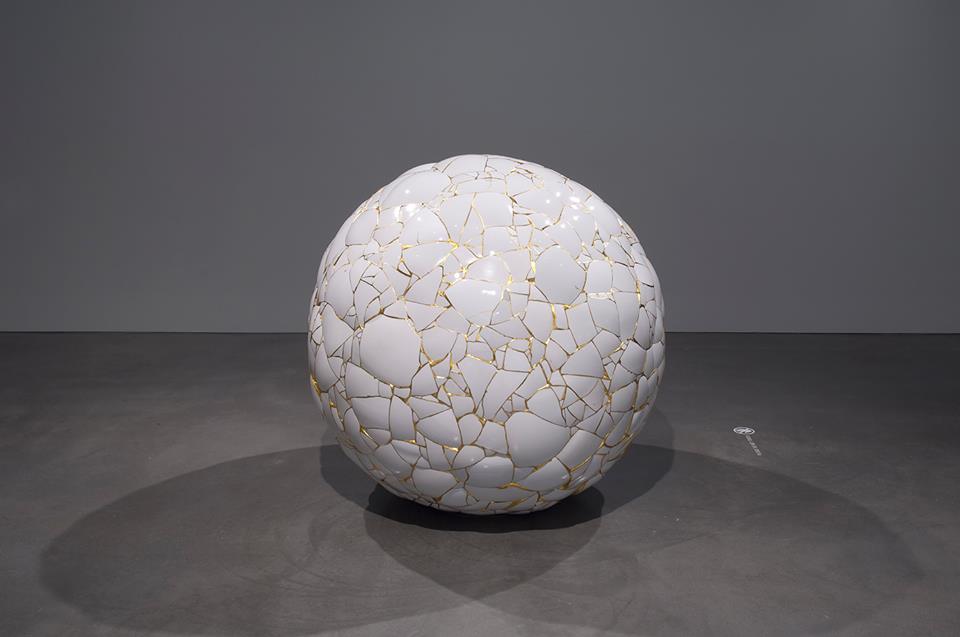 ______________
Petroc Sesti Vanishing Point (2013)
“Vanishing Point” is a large glass sphere filled with optical fluid that is stirred by a turbine. The kinetic movement of this large liquid lens moves the light captured from the striped walls in an undulating rhythm.

______________
RobertLovesPi Hyperdodecahedron (2013)
This regular polytope (four-dimensional version of a polyhedron) is rotating in hyperspace. If you could see it there, you’d notice that all 120 unit dodecahedral cells have the same volume.

______________
Jesús Rafael Soto Sphère Lutétia (1995 – 2014)
“In order to achieve abstraction, I thought it was important to find a graphic system that would allow me to codify a reality rather than represent it.” 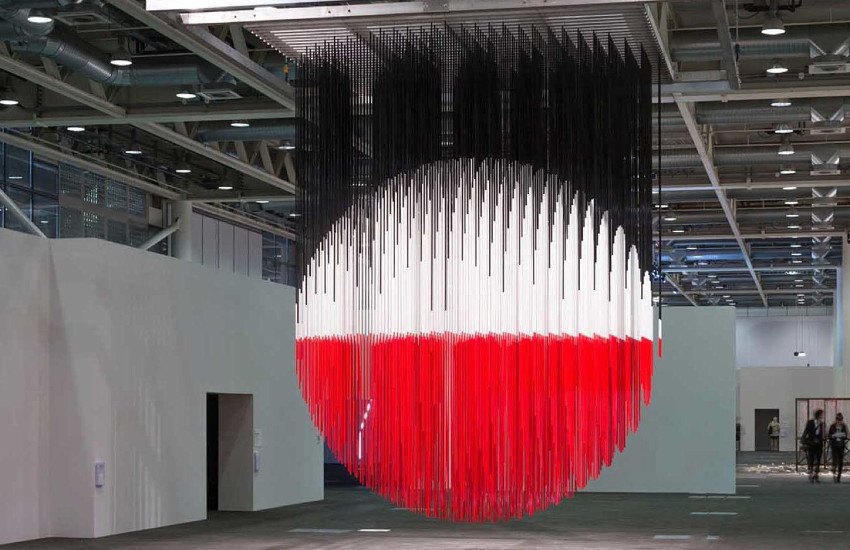 _______________
Ichwan Noor The Beetle Sphere (2013)
Jakarta-based sculptor Ichwan Noor arrived with this giant sculpture of a 1953 Volkswagen Beetle that, combined with polyester and aluminum, has been morphed into a perfect sphere. 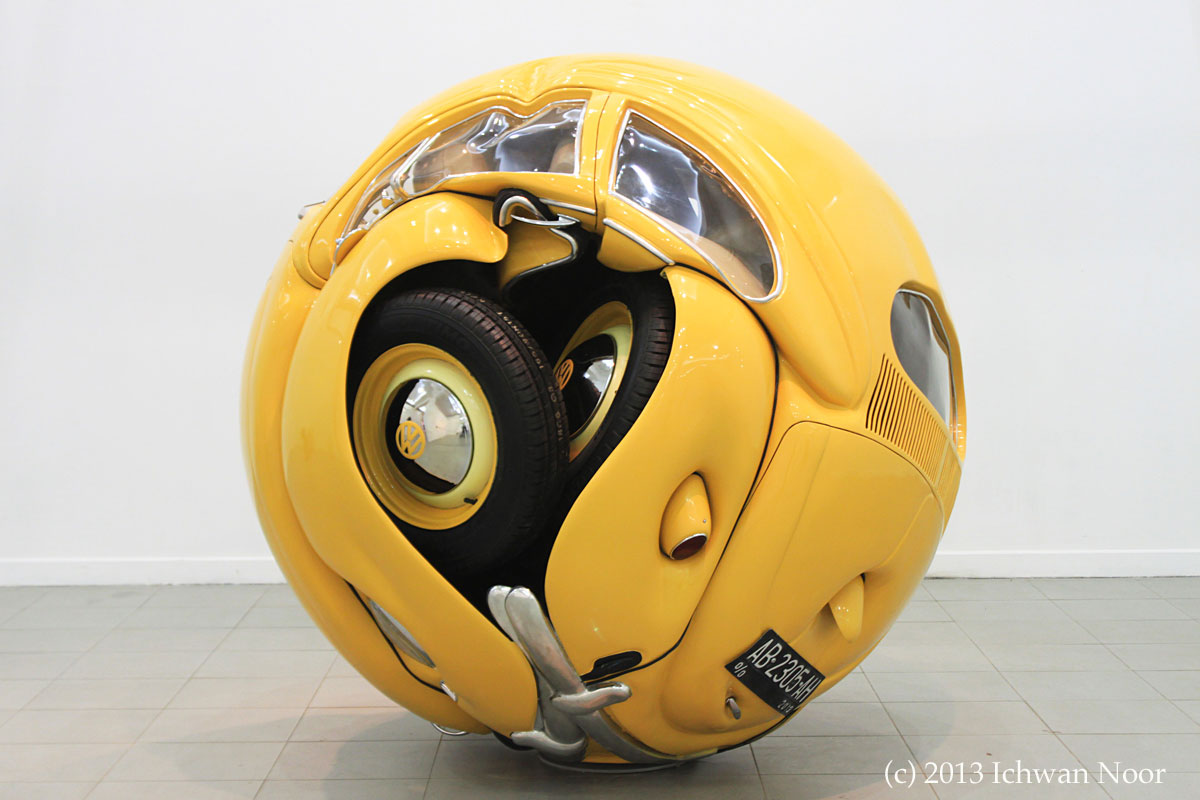 _______________
Olafur Eliasson Cold Wind Sphere (2012)
This geometrical structure is composed of spheres in three different sizes that are layered within each other. Glass triangles in three distinct shades of blue are fitted between these layers. The outer surface of the largest sphere is composed of an almost-transparent grey-tinted glass. A light bulb situated at the centre of Cold wind sphere casts shadows and reflections into the surrounding room in the shades of the individual glass pieces as well as in the colours created by their superimposition. The appearance of the sphere depends on the position of the viewer.

_______________
Roger Asay and Rebecca Davis Cottonwood Sphere (2010)
We work through simplification and minimal arrangement to create a clarity that reduces the distance between the viewer and the materials presented. 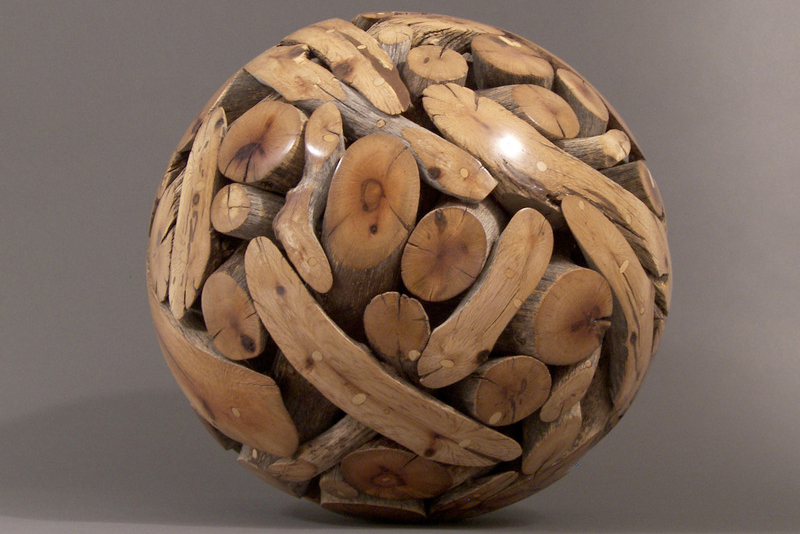 _______________
John Miller Storage Area (1999)
Storage Area is related to Miller’s well-known series of relief sculptures and assemblages, for which he appropriates everyday objects and waste material and appends them to basic forms. In 1986, he began smothering these arrangements with brown excrement-like impasto. Storage Area’s use of children model railways reflects the proliferation of mass produced objects that exist in two states: as symbols of material products in a capitalist society and plastic duplicates of “real” objects found inside a child’s playroom. 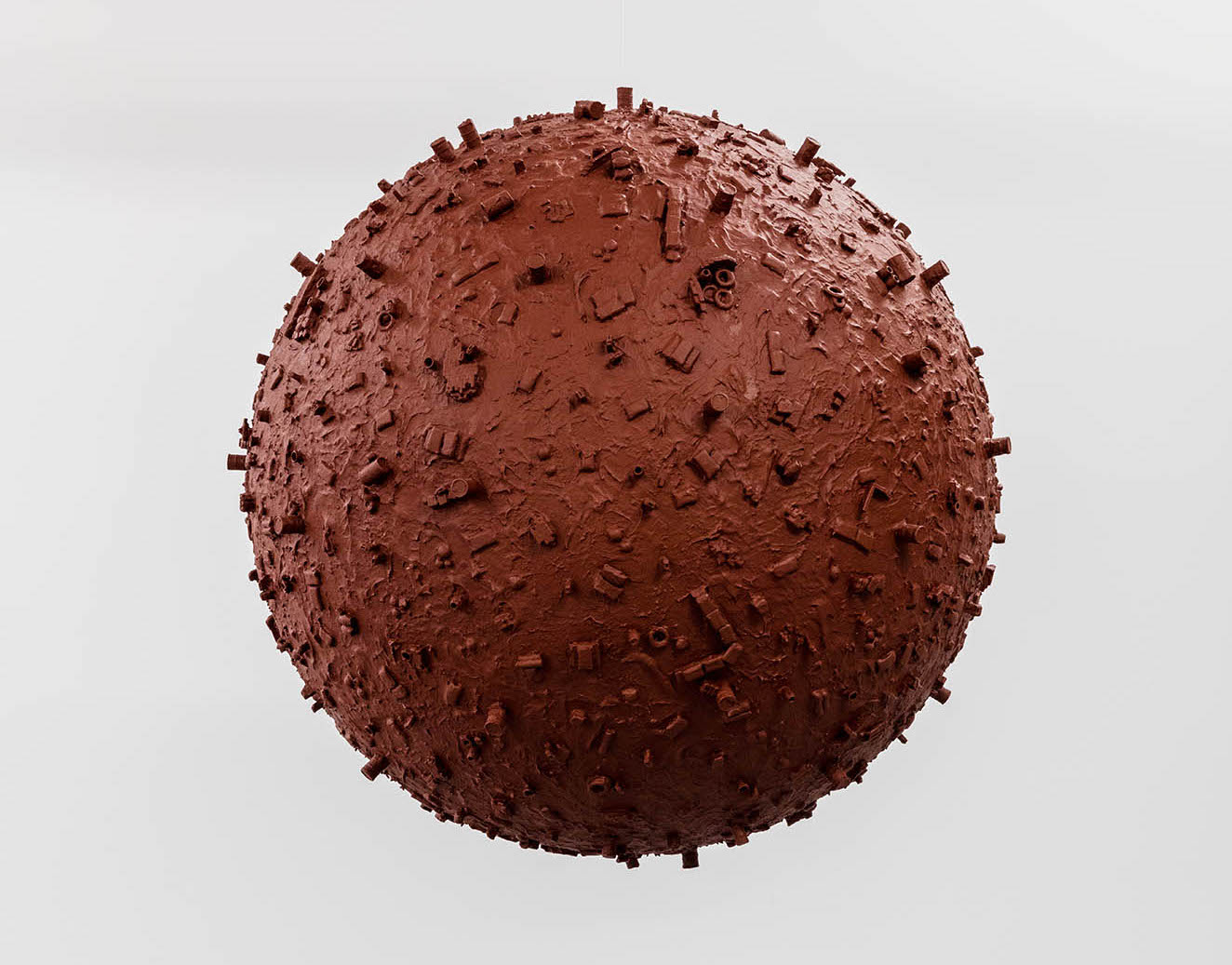 ______________
Sarah Sze Triple Point (Planetarium) (2013)
Like most of Sze’s creations, Triple Point (Planetarium) looks as if it was produced through a certain fanatical obsession, but the work also relies on the aforementioned architectural principles to unite materials of wood, steel, stone, string, paper, plants, and more into her final environment. The exterior looks crazed and chaotic, but in detail Sze has arranged her objects into a very specific, rationalized order. Regardless, her choices are clearly not random, and leave her fantasy-like environment open to interpretation and narration for the public.

______________
Roni Horn Asphere (1988)
A few rooms into Roni Horn’s exhibition at Tate Modern, you come across a stainless steel sphere, like a big, gold bowling ball. But it’s is not as shiny as you might expect, given the material, and somehow more delicate. This may be because it isn’t quite a sphere. The fact that it’s not perfectly spherical makes it a more satisfying shape, though one I can’t quite grasp. Does this fact make it imperfect? It is perfectly itself. The artist has said that this ovoid shape is about androgyny, so maybe it’s a self-portrait. 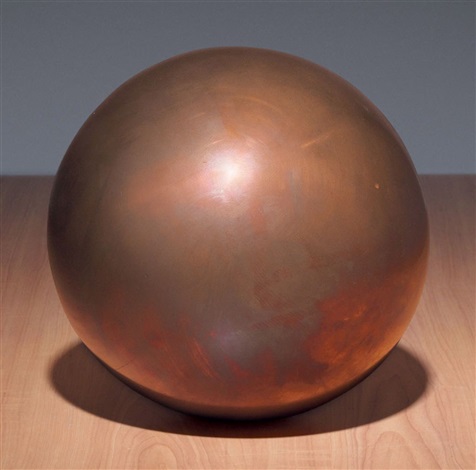 _______________
Michel De Broin Black Whole Conference (2007)
Michel de Broin is an artist who delights in toying with paradox by inviting competing references to take up residence in a materially manifest form. In this approach conceptual moorings are severed by aesthetically confronting the viewer with an assemblage that silences or troubles the ideas it purports to speak for. In his sculpture “Black Whole Conference” the artist uses ordinary chairs—the primus locus of collective discussion —as building blocks to construct a sphere that inscribes itself on several intertwined conceptual levels: that of a public sphere with its open, non-hierarchical and egalitarian communicational architecture, that of an immunological system that is closed upon itself to ensure internal cohesion by defending against external threats, and that of a voyage ready astronautic capsule. 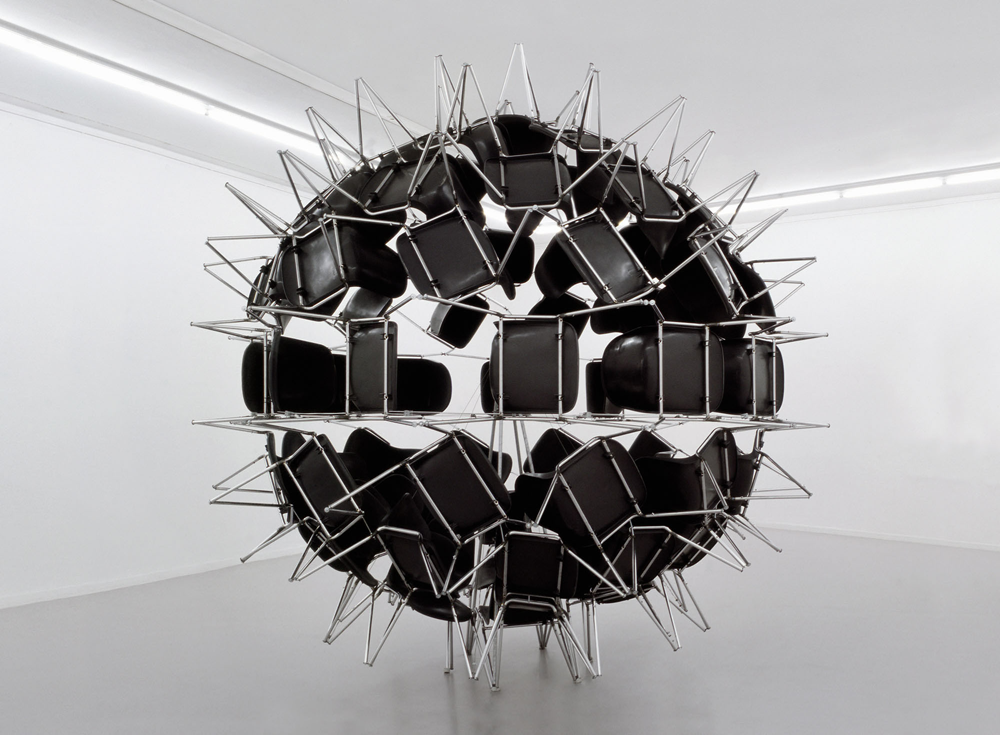 _______________
Takis Vasilakis Music of spheres (2010)
In 1955, influenced by the invention of radar and the technological landscape of the station at Calais, Takis constructed his first Signaux [Signals], soon turned kinetic and resembling radio antennas and serving in his street happenings. His installation The Music of the Spheres (2004), comprised of kinetic and musical sculptures, is inspired by the Greek ancient belief that every planet emits its own sound frequency in the solar system, a fact that nowadays has been proved scientifically. 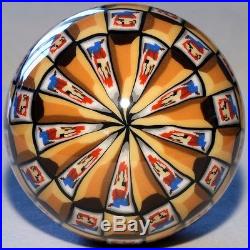 _______________
James Lee Byars The Monument to language (1995)
It is virtually impossible to place the work of James Lee Byars into a contemporary cultural context. Byars is Byars – a wonderfully engaging philosopher/artist, a creator of philosophemes. A man both of our age and of other ages. Byars is steeped in Italian Baroque aestheticism; he is a scholar of Japanese haiku and is adept at making Japanese ceramics and paper, and he is capable of combining the essence associated with Zen Buddhism with the starkness of ‘Protestant’ minimalism. He also watches MTV. 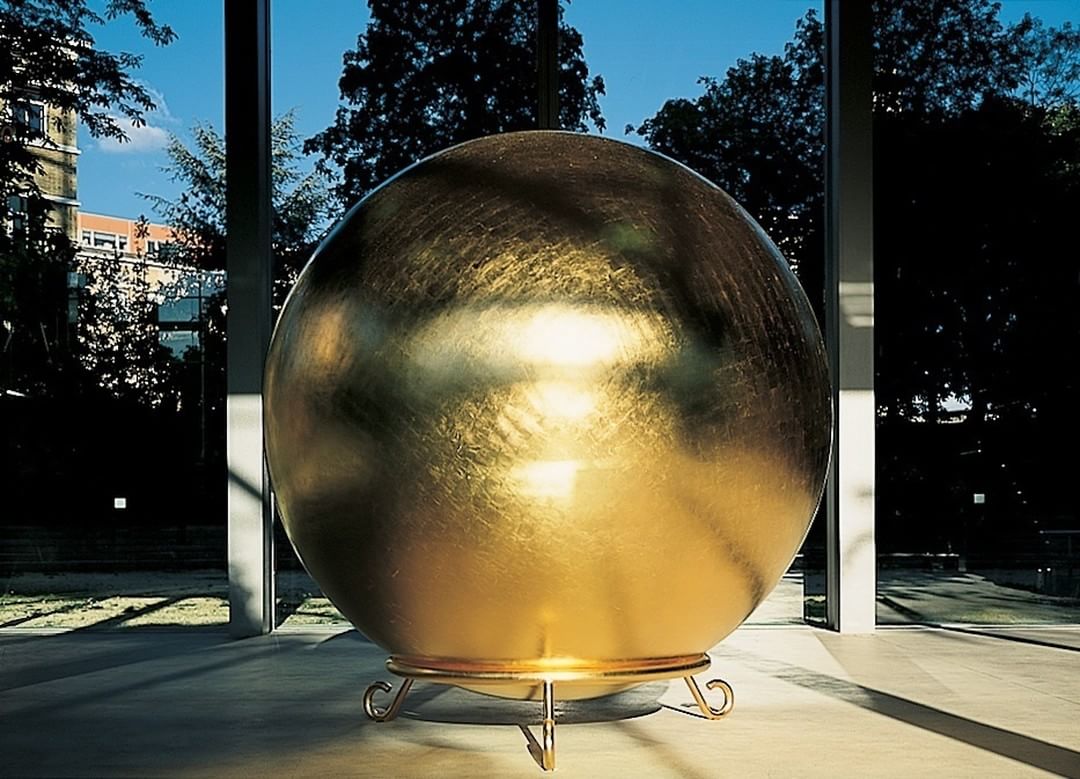 _______________
Stano Filko Breathing (1970)
According to his birth certificate, Filko was born on June 15, 1937 in Veľká Hradná, a small village in the Trenčín District. However, the objective reality of the official record was constantly disrupted and layered by the author in the intentions of the ideal of “subjective-objective art” that originates in modern art. Influenced by conceptual art, Filko later turned to “merging art and life”. Instead of stating dates, the paintings and text arts especially from the late period feature a special triple date that says “13.14.15.JUNE”. This numerical code refers to the authenticated reality of Filko’s birth on June 13 and the official registration at the registry two days later. 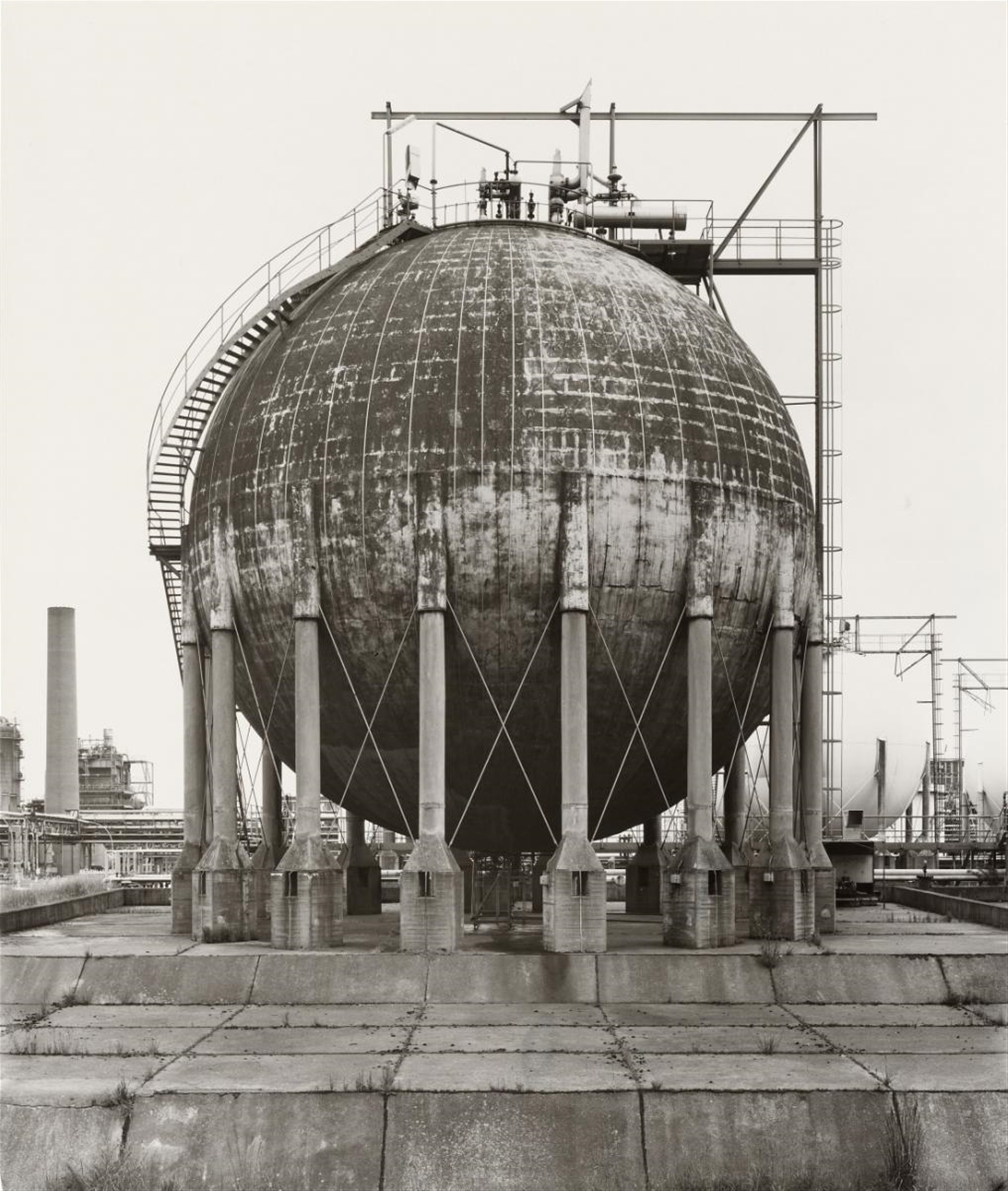 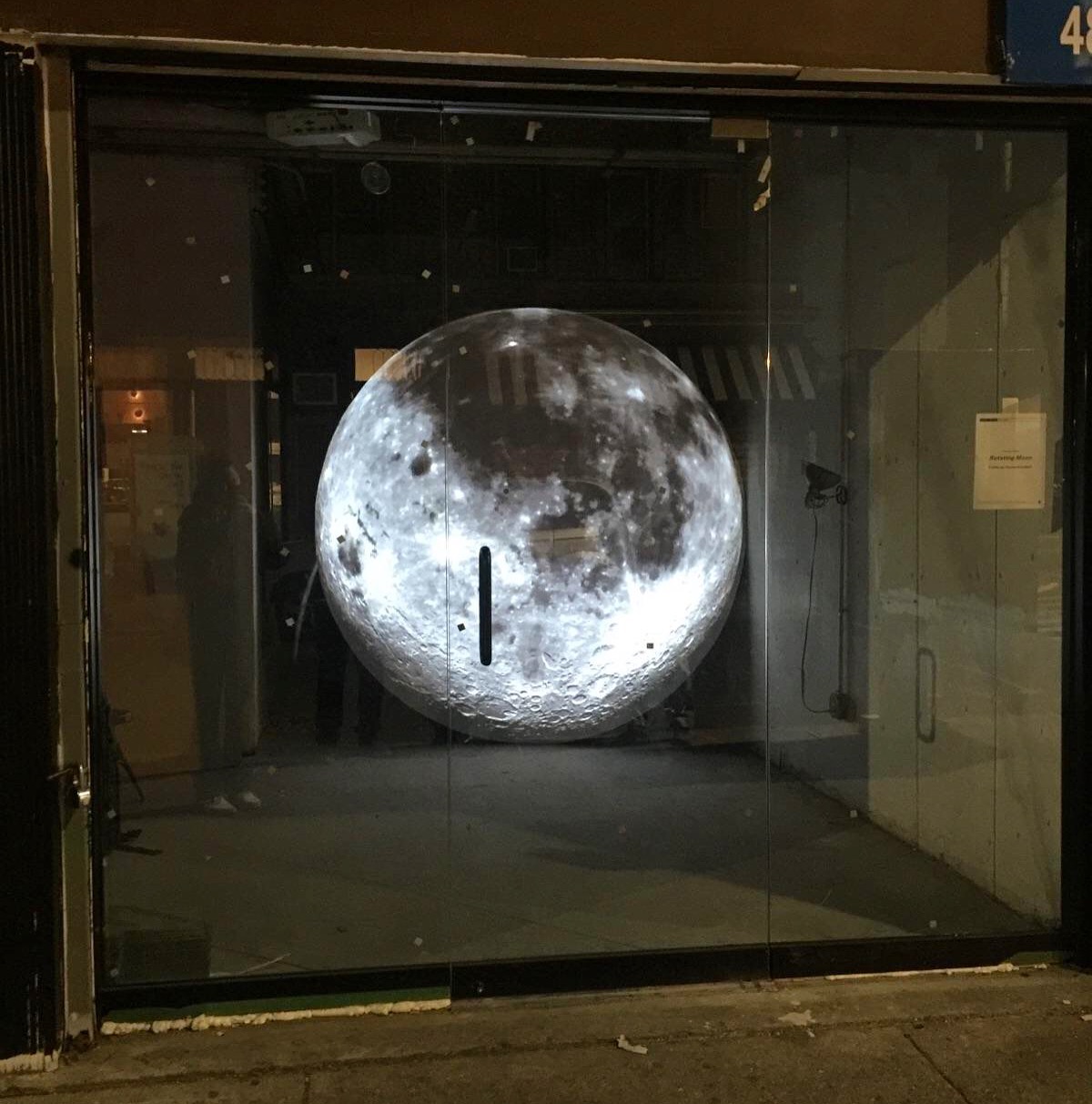 _______________
Oksana Mas Sphere of Kindness And Spiritual Revival (2017)
Ukrainian artist Mas has been using the Easter egg as a technique for more than a decade now. The same sizes of eggs are covered with the right paint and then with moisture-resistant lacquers, preservatives and color protecting from ultraviolet radiation. 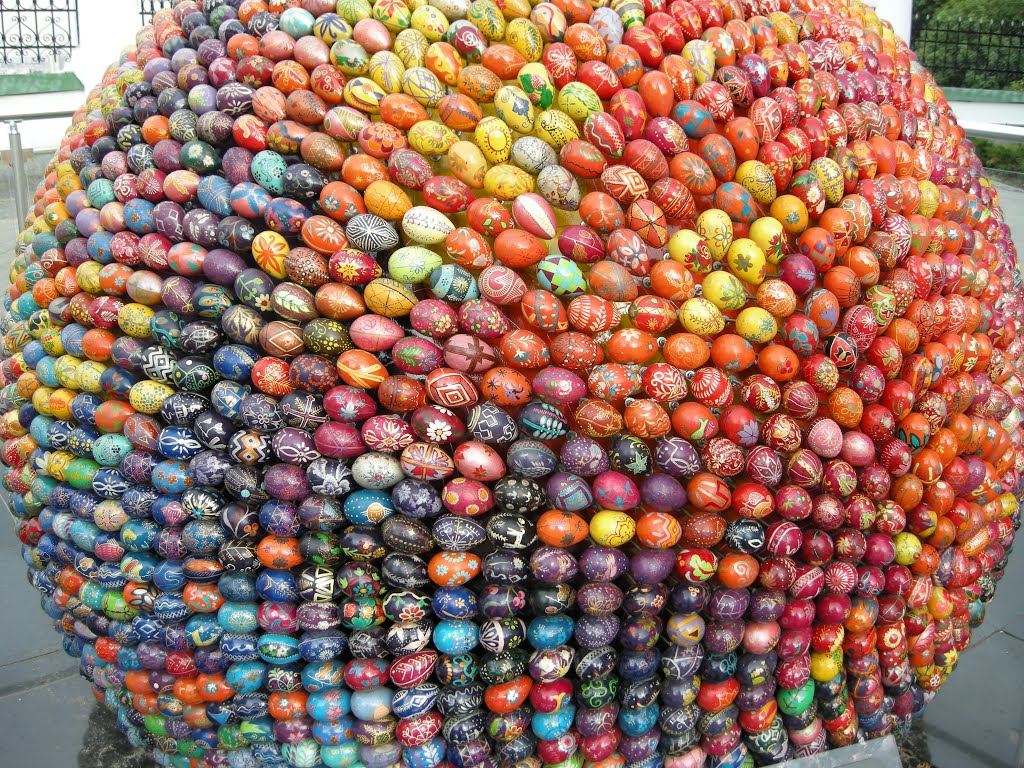 _______________
Neil Dawson Globe (1989)
‘Rather than suggesting weight and substance, like many traditional sculptures, Neil Dawson’s works represent lightness and transparency. They are often hung high above the audience so they can be both seen and seen through, and are created from materials such as steel mesh and carbon fibre. ‘Globe’ (1989), seen here suspended above the Centre Pompidou in Paris, is a prime example. 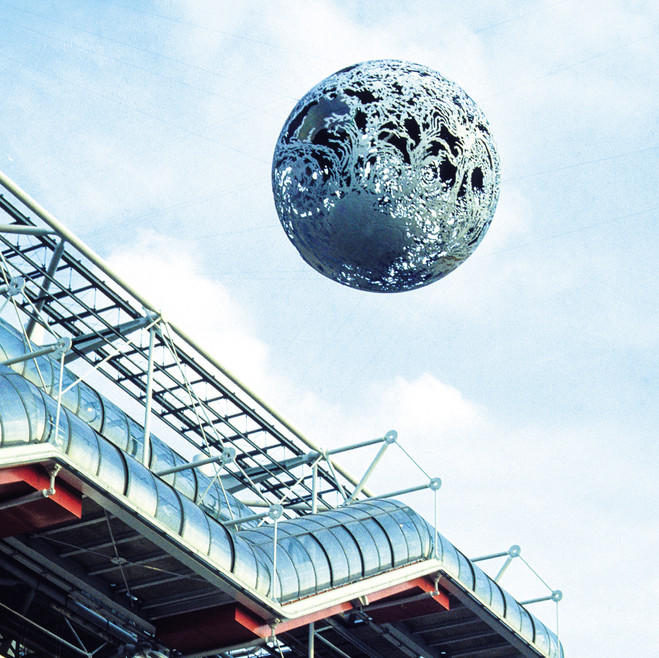 ______________
Tony Oursler Switch (eye) (1996)
Real eyes are not so easy to read and people focus a lot of attention on them, trying to find something inside them. They are organs which constantly seek and watch and are in turn being watched. This eye is looking at television while surfing the channels, and we all do here in America. So you see the eye with a little TV image reflected within the iris. The pupil contracts and expands. It seems to be almost feeding. Sometimes you can hear the soundtrack and sometimes you can recognize the images and sometimes not, they are just too dim or small or far away. The reflections are random because at the time they are recorded they are broadcast live so I never know the combinations which will occur. I switch channels intuitively while recording the image. This is probably the only improvisational part of my work, surfing.

_______________
Russell Crotty Summer Triangle over Chumash Wilderness (2003)
Russell Crotty is known internationally for his drawings on fiberglass spheres based on direct astronomical observation, investigating the cosmos and exploring the nature of the universe through art. 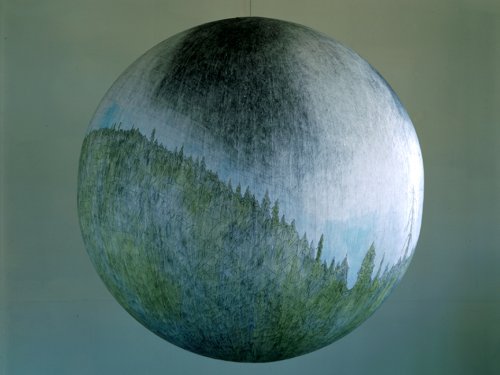 ______________
Adel Abdessemed Soccer ball (2009)
“I just saw this ADEL ABDESSEMED show at DAVID ZWIRNER. It had a soccer ball made of razor wire. It was great and it reminded me of the painted can surrounded in razors in the film La Collectionneuse by ERIC ROHMER that we watched in your hotel room. You would like this exhibition, it was violent and soft.” 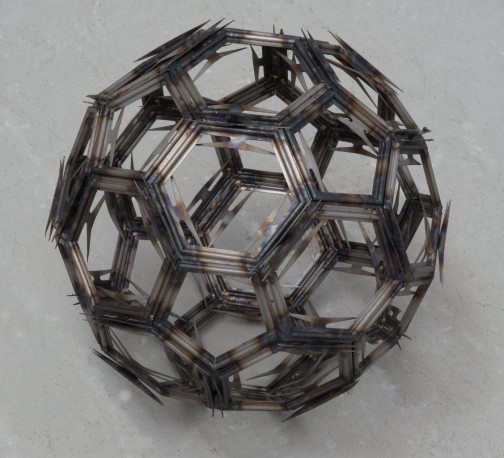 _______________
Takeshi Murata Melter 3-D (2014)
The “Melter 3-D” is a a zoetrope, a pre-cinematic device that creates an illusion of motion from the rapid succession of static pictures. This 3D version implements a stroboscope, which essentially means that flashing lights are used in to illuminate the sculpture at the appropriate times to create an illusion of movement.

_______________
Pipilotti Rist Your Space-Capsule (2006)
This work invites the viewer to peer from a cinematic angle. Looking down into the private space of what could be a teenager’s bedroom, a squat or student’s flat with a crashed-in planet, Your Space Capsule, 2006, reveals the way that the spaces that we occupy, fill up with daily detritus and that can make up the backdrop of our lives are only small fragments of space and time. 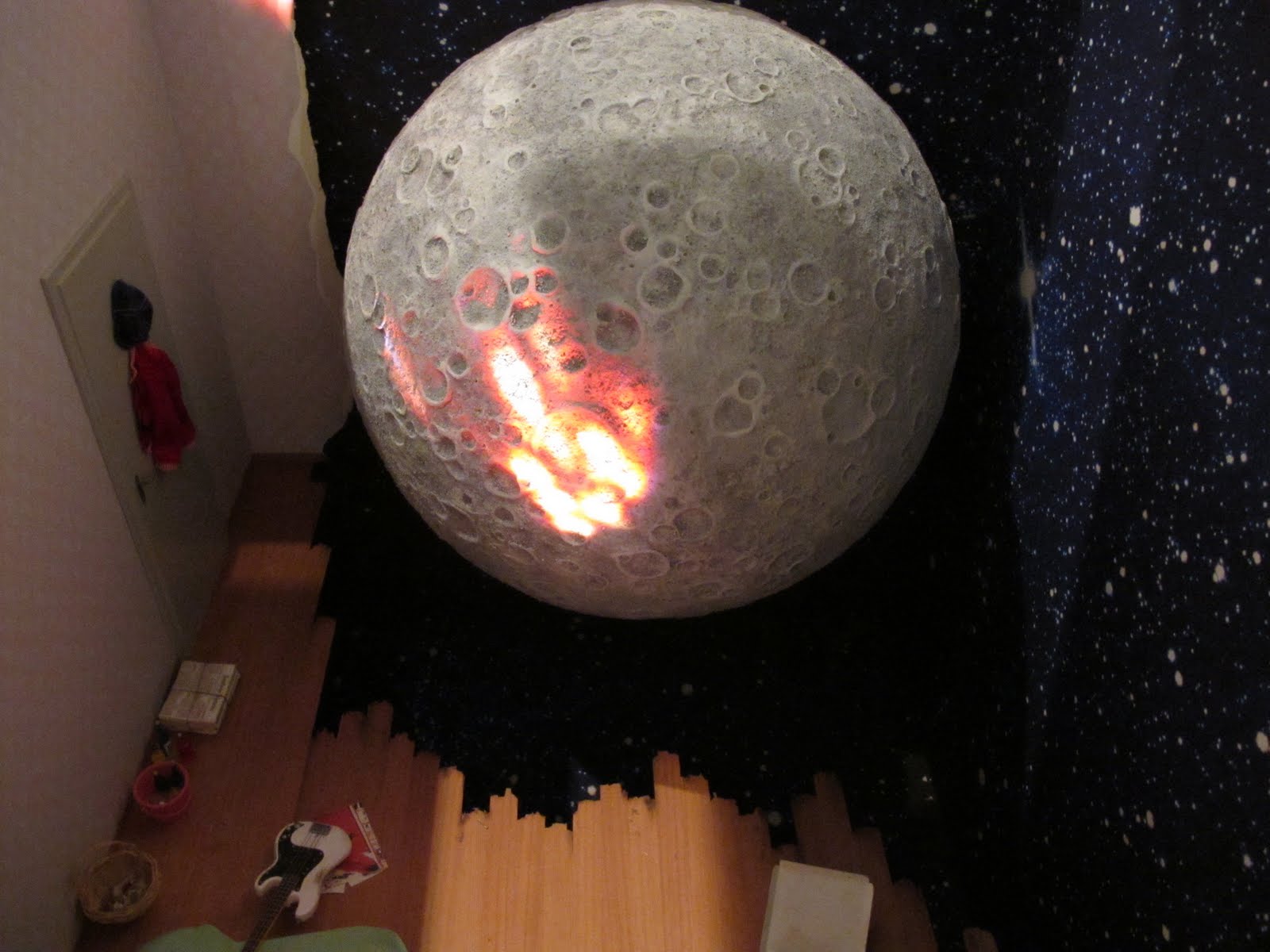 ________________
Ryan Gander Really Shiny Things That Don’t Mean Anything (2011)
Ryan Gander’s work is composed around visual puzzles and unusually composed objects that subvert expectations at every angle. His practice aims to be a starting point, and his found and made objects suggest stories that deliberately resist closure. More really shiny things that don’t mean anything, a large assemblage constructed from pieces of reflective industrial metal, can only be fully viewed from the window of the gallery, as its placement within the room obstructs the doorway entrance. This blockade frustratingly limits the extent to which we are permitted to engage with the work, but this is tempered by something coy and slightly ridiculous: the idea that something of this magnitude is attempting, given the reflective quality of its surface, to somehow camouflage itself or hide from the frustrations it evinces. 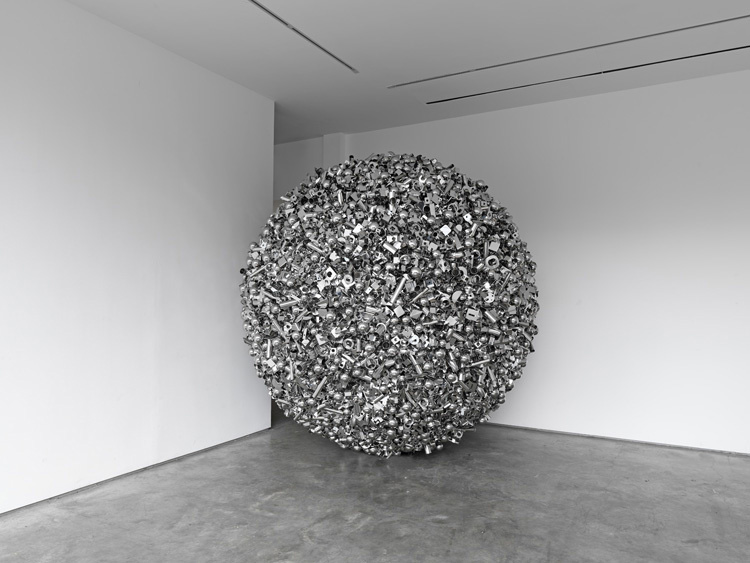