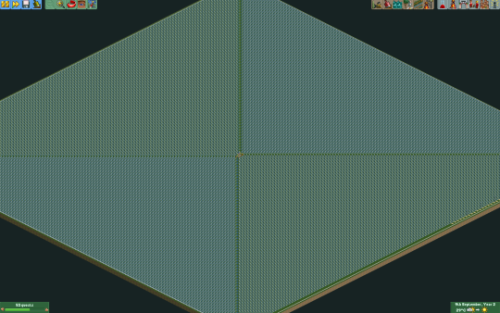 ‘Gentlemen, I have done it. I have found a way to go slower than was ever thought possible.

‘You may remember from a few threads ago I made a vintage cars that used all the object data on the largest map possible – The Wheel Of Life And Death. The slowest ride with the longest possible track. at the time time i though this was the slowest you could go but I found a way to go slower.

‘With this in mind I build a spiral track on the biggest map. The train comes out of the station and hits breaks with slow it down to 4mph. then it travels along the track, always losing speed but never stopping, until it gets to the center. where it rolls back and does the spiral again until it gets back to the station. Calculations show that it would take 210 days to finish. not in game days. real life days. 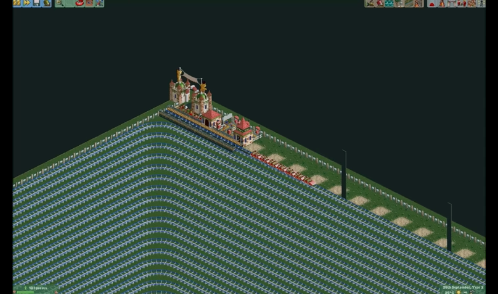 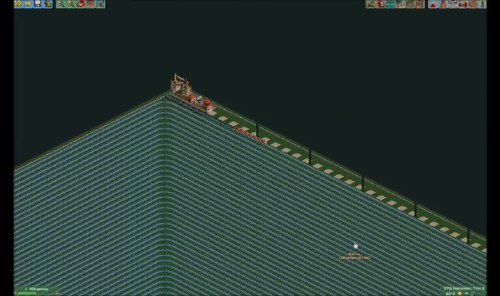 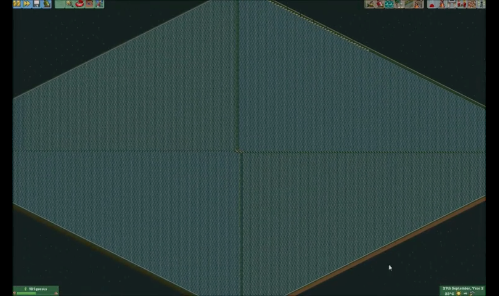 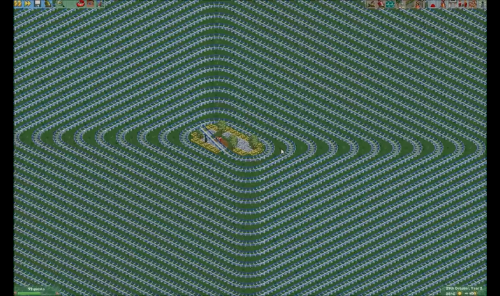 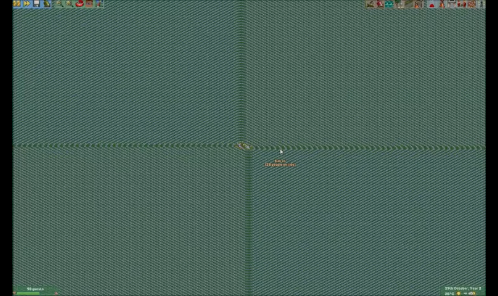 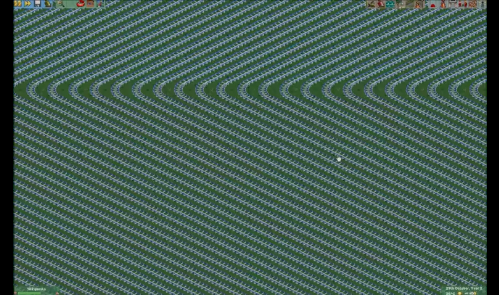 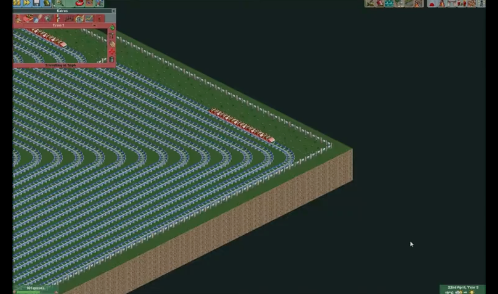 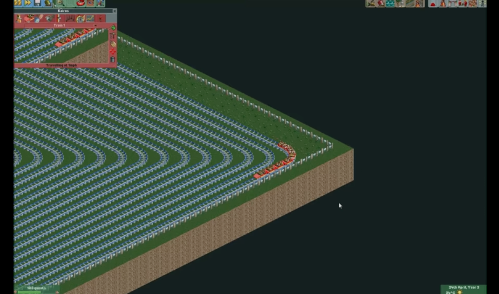 ‘RollerCoaster Tycoon is a strange game. It was programmed by one man… in assembly language. The originals have stood the test of time in ways only the best 90s and early 2000s PC games do, even after a few sequels. That’s thanks not just to its solid foundation, but a creative fanbase that continues to output feats of engineering genius, from perfect roller coasters to viable microparks, but also, occasionally, an unrelenting doom coil of a ride that takes over 3,000 in-game years for unsuspecting guests to complete.

‘At first glance, Kairos might look like a spiraling descent into the underworld, but it’s just the isometric perspective fooling you. The actual ride is built on the largest map in the game, with tracks wrapping flat around the perimeter and spiraling into the center of the level. From there, the cars are supposed to roll back, complete the spiral a second time, and reach the initial station at the start. Brakes at the beginning of the ride slow the cars down to 4 mph, making for some painfully slow speeds throughout as that number decreases.

‘This is the only footage of Kairos apart from this Tumblr post documenting it, but you can see The Wheel of Life and Death, another creation by the same player, below — a fever dream of interlocking tracks like an eternal pattern in some abstract medieval hell.

The Wheel Of Life And Death

‘The first roller coaster as torture device creation, and the most infamous of all, is probably Mr. Bones Wild Ride, popularized on a 4chan thread that first introduced the madness of its 70-minute duration through a series of screenshots.’ — Motherboard

‘On March 26th, 2012, an anonymous 4chan user started a thread in the /v/ (video games) board, which included several screen captures from the amusement park management simulation game Roller Coaster Tycoon 2. The images showed a 30,696 foot roller coaster track with 38 riders that took four years of in-game time to complete. The original poster (OP) provided greentext descriptions of the images, explaining that passengers were constantly yelling “I want to get off Mr. Bones Wild Ride.” After the coaster ended, the passengers walked down a large path leading to another entrance to the ride, where they were greeted by an installation of a skeleton with a top hat and a sign reading “The ride never ends.” Prior to being archived, the thread accumulated over 325 responses.

‘After the 4chan thread was posted, a creepy pasta surfaced about a user visiting the Busch Gardens theme park while on vacation, where he discovers a strange ride as he wanders the park. After getting on the ride, he notices a giant skeleton tipping his hat next to a sign which read Mr. Bone’s Wild Ride.

‘On March 28th, 2012, Redditor lessonplan submitted a post to the /r/gaming subreddit titled “One does not simply get off of Mr. Bones’ Wild Ride,” which included several screenshots from the 4chan thread. Prior to being archived, the post received over 4,250 up votes and 225 comments. On April 3rd, FunnyJunk user SweatyAnReady submitted the same set of screenshots to the Internet humor site, which received over 19,500 views and 323 up votes within the next six months. On May 10th, a Facebook page for Mr. Bones’ Wild Ride was created, receiving 150 likes within the next five months. On May 22nd, a Mr. Bones thread was created in the /v/ board on 4chan, which received over 875 replies prior to being archived.’ — Know Your Meme

Turkeyslam RollerCoaster Tycoon 2 – Euthanasia Coaster
This is the product of my friend and I getting hammered on strong booze. When I found out that the Twister Coaster allows launched lift hills…. we had to. This coaster is ten miles long and probably has strong enough G-forces to knock out and kill a whale.

maciozo Here’s another one. This time, everyone dies.

p.s. Hey. ** Steve Erickson, Hi. Everyone, before you exit the subject of Jean Rouch, do read Mr. Erickson’s 2013 thoughts on the maestro. Well, if you want a general piece of advice about the film you’re planning, taking LSD is a very unique and complex experience, and you’ve never taken it if I’m remembering correctly, so I would suggest doing whatever homework necessary to get the representation of that experience right because 80+ percent of the depictions I’ve seen of people on LSD in films and elsewhere have been way off the mark and just inadvertently campy. Everyone, also Steve has weighed in on ‘I, Tonya’, and he doesn’t like it one little bit. See. I’m so excited to see your glowing report on ‘Wormwood’. I am now almost literally dying to see it! Cool if true about Justin Broadrick’s generosity. ** David Ehrenstein, Hi. Yes, I believe ‘Les Maitre Fou’ was left out due to lack of any video evidence on the day I made the post. But you’ve found one that continues to work as of this morning. Everyone, a Rouch film left out of this weekend’s post for technical reasons can be watched, probably, if you hurry, here, and you have Mr. Ehrenstein to thank. ** John Fram, Hey. Thanks a lot for that rich explanation of your escape room-devising experience. Much appreciated. I of course deeply understand about learning from that regarding your fiction’s construction. Zac’s and my next film is about a haunted house attraction and the family that makes it, and we’re trying to have the film’s overall structure mirror that of the attraction. Anyway, your description of the process is extremely interesting and decorates one of my imagination’s most excitable voids. Thank you again! Too bad that the Paris escape room thing didn’t happen. I think it could do really well. We have a year-round haunted house attraction here – Le Manoir de Paris — that is both excellent and hugely successful. Take care. ** Lynne Tillman, Hi, Lynne! Thank you, thank you! I’ve just started reading your novel, and it is amazing and so, so great! I hope the holidays are treating you royally. Lots and lots of love, Dennis. ** _Black_Acrylic, Hi, Ben. Thanks a bunch for alerting Mr. Best. Did you read his newish book ‘Captagon’? It’s so good. Nice to hear you’re snuggled up in Leeds. I mean assuming the city has a snuggly aspect. I’d never heard of Milky Bars. They’re white? I’m intrigued. Enjoy every single little thing. ** Dóra Grőber, Hi, Dóra! The Hallyday funeral thing was pretty massive. And all for a rock star. Even Elvis Presley, whom Americans insist on comparing Hallyday to, didn’t get treatment like that when he exited. I did manage to worm myself through the throng and partake of stuff. Really interesting. Yeah, I ended up needing to use the weekend to work mostly. I finished the new draft of the revised, partial film script and sent it to Zac so he can go over it and initiate the next changes. I started working on the assignment script and got far enough to send the beginnings that I managed to make to Zac for his input. I know I did other stuff too, but it doesn’t feel like it. Sorry you had to waste part of your day for no ultimate reason. But at least you got to spend Sunday in your bed with musical heroes serenading you. Are you refreshed? Did today build you up, wear you out, both? ** Bill, Hi. My weekend was work-y. I was okay with it. I haven’t seen ‘Beach Rats’. Zac liked things about it and didn’t like things about it. I’m very interested because its director is the great, great cinematographer for Philippe Grandrieux’s films, which are always visually stunning. I’ll take a look in the direction of that Daniel Kehlmann novel and find out what’s what. Thanks! ** Jeff J, Thank you a ton for occasioning the Day, man. I hope the allergies, flu, what-have-you used the weekend’s end as their finish line. I saw that about the theater closing on FB. That’s awful. No festival news yet. We’re just waiting and waiting with increasing nervousness. Two big festivals are considering it right now. I think we’ll hear something from at least one of them this week. Gulp, gulp. I’m still sworn to secrecy annoyingly about the other project you mentioned, but, err, it’s proceeding. News when I’m allowed. ** Okay. I was in the mood the other day to restore today’s post, and so that happened. See you tomorrow.