Man who dreamed of being ‘human puppet’ dead at 20 * 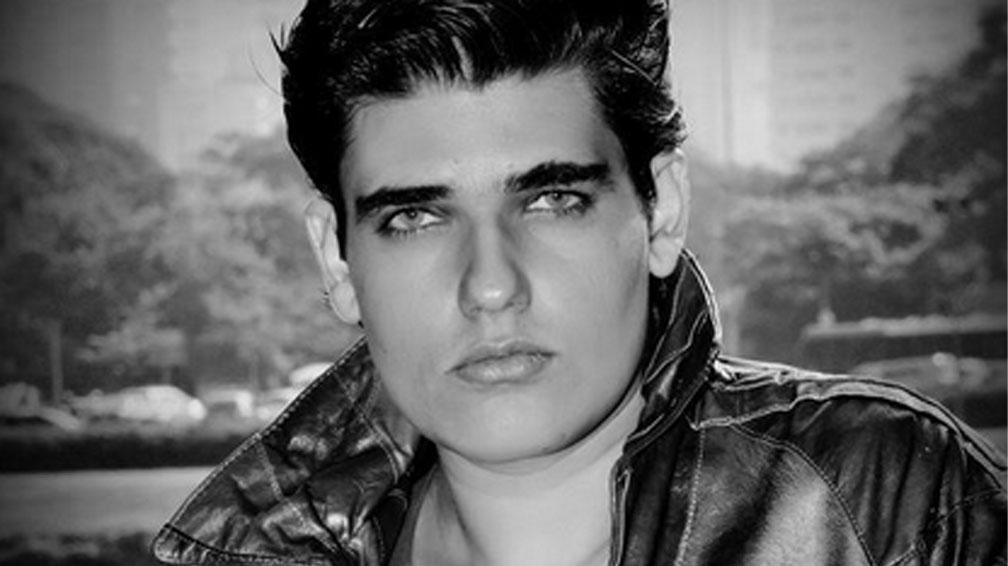 Even before he found global fame as a human Ken doll, Celso Santebañes’ physical appearance had made him a star in his native Brazil. As a child, Celso Borges Pereira (the name he was born with) was feted for his beauty, his perfect features refusing to fade with each year that passed. At 15, he started entering — and winning — modeling competitions, eventually catching the eye of a Sao Paulo talk show talent scout. 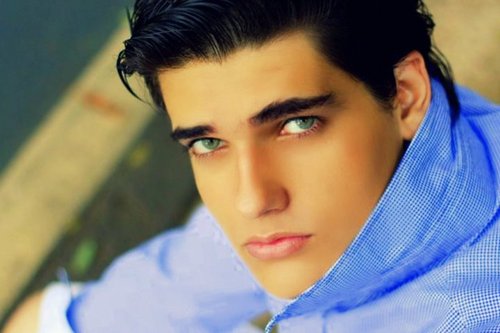 The show gave him entry into the world of celebrity, and within a year, he’d taken up acting and changed his surname to Santebañes after his favorite Mexican sitcom character.

It was around this time that people started telling him he looked like a Ken doll. It happened so often that Santabañes became fixated on the toy, lining his bedroom shelves with dozens of the plastic figurines. He later explained that his family’s endorsement of the bizarre comparison inspired him to recreate himself as a “human puppet.” 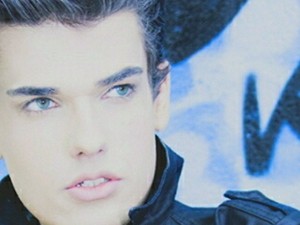 “Obsessed with the perfection of physical beauty, Santebañes started to identify features of his face that didn’t look like the Mattel brand doll,” the Latin Times said. “(He believed) his nose was too wide and his philtrum — the crease of the upper lip — simply too natural.” Multiple plastic surgeries and an estimated $60,000 later, Santebañes had fixed his “imperfections” and joined a growing number of adult men aspiring to look like Ken. 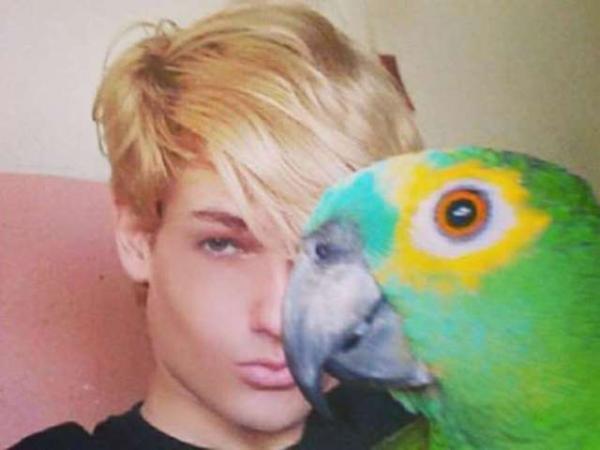 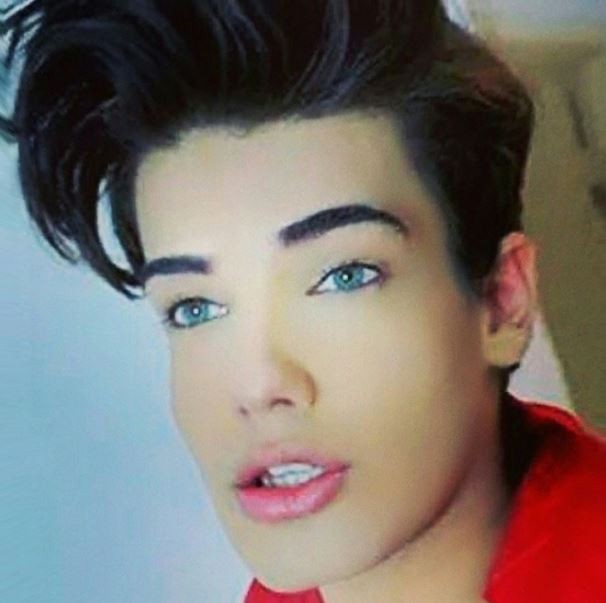 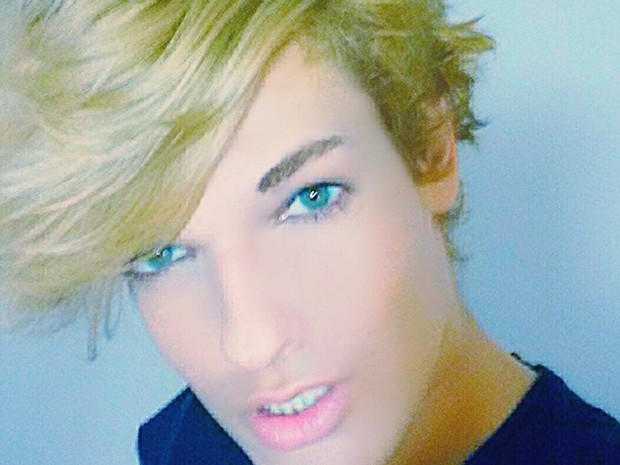 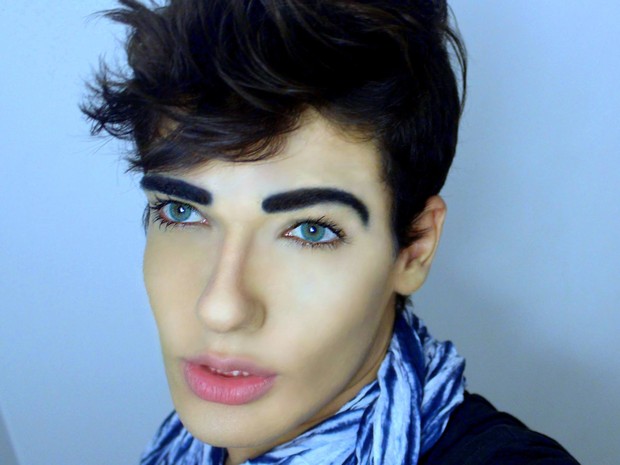 In an interview with a Brazilian newspaper after he was discovered, the former miner said: “This is so magical. My life has changed. I feel like the whole of Brazil is supporting me. People are sometimes frightened by the way I look, and stop me to say how much I look like a doll. I do suffer a lot of prejudice. But the world is full of judgmental people, I don’t care.” 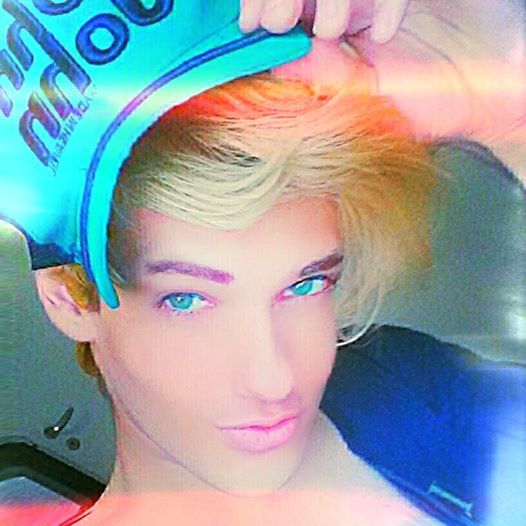 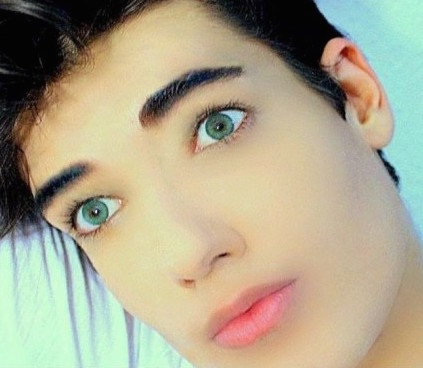 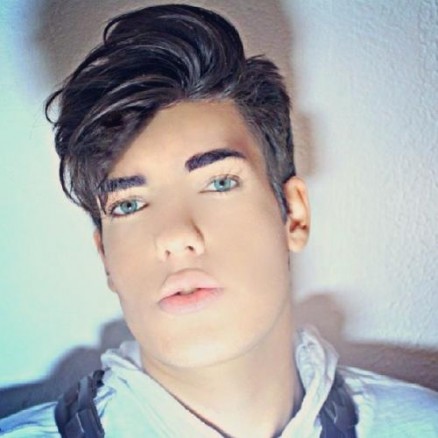 Before long he was charging up to $20,000 for public appearances at party houses, clubs, weddings and children’s plays, even launching a line of Celso dolls in Los Angeles, much to the envy of rivals Justin Jedlica (aka Ken 1) and Rodrigo Alves (aka Ken 3). 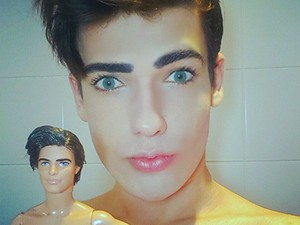 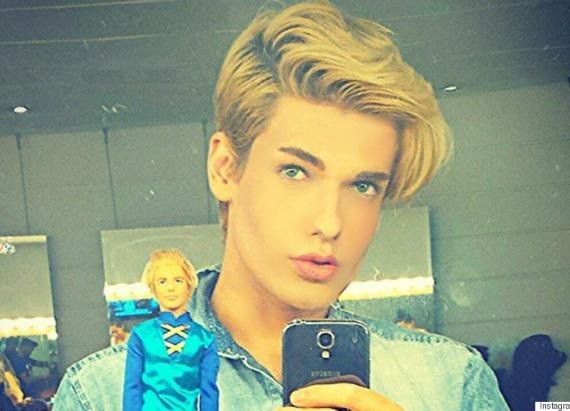 “He daydreamed about making a film with Valeria Lukyanova, the Ukrainian ‘Human Barbie,’” the Latin Times said. He was negotiating an “advertising campaign for a huge fashion house”. But despite his success, he said he wasn’t entirely happy. “I think I’m 90% of what I want to be,” he said last year. “I intend to do more surgeries, but do not know what. For now my investment is being in the gym, for Ken is strong and I am skinny.” 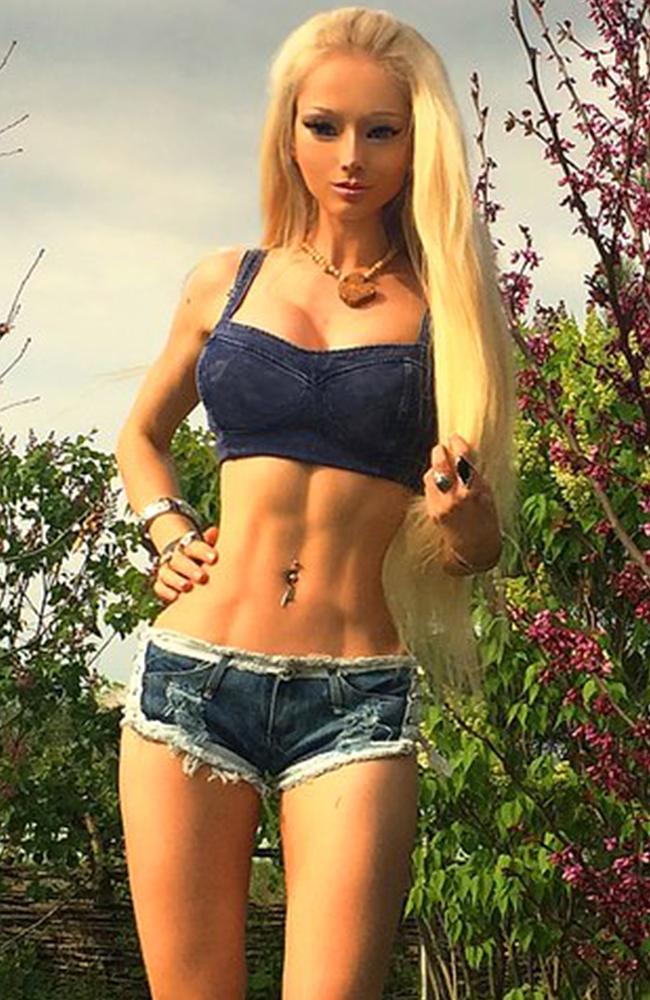 But late last year, Santebañes received a reality check in the form of an unexpected cancer diagnosis. A rare and aggressive form of leukemia had been detected during blood tests in preparation for surgery to repair a leaky filler in one of Santebañes’ legs. He was only 20 and suddenly he was dying. The impact was immediate. 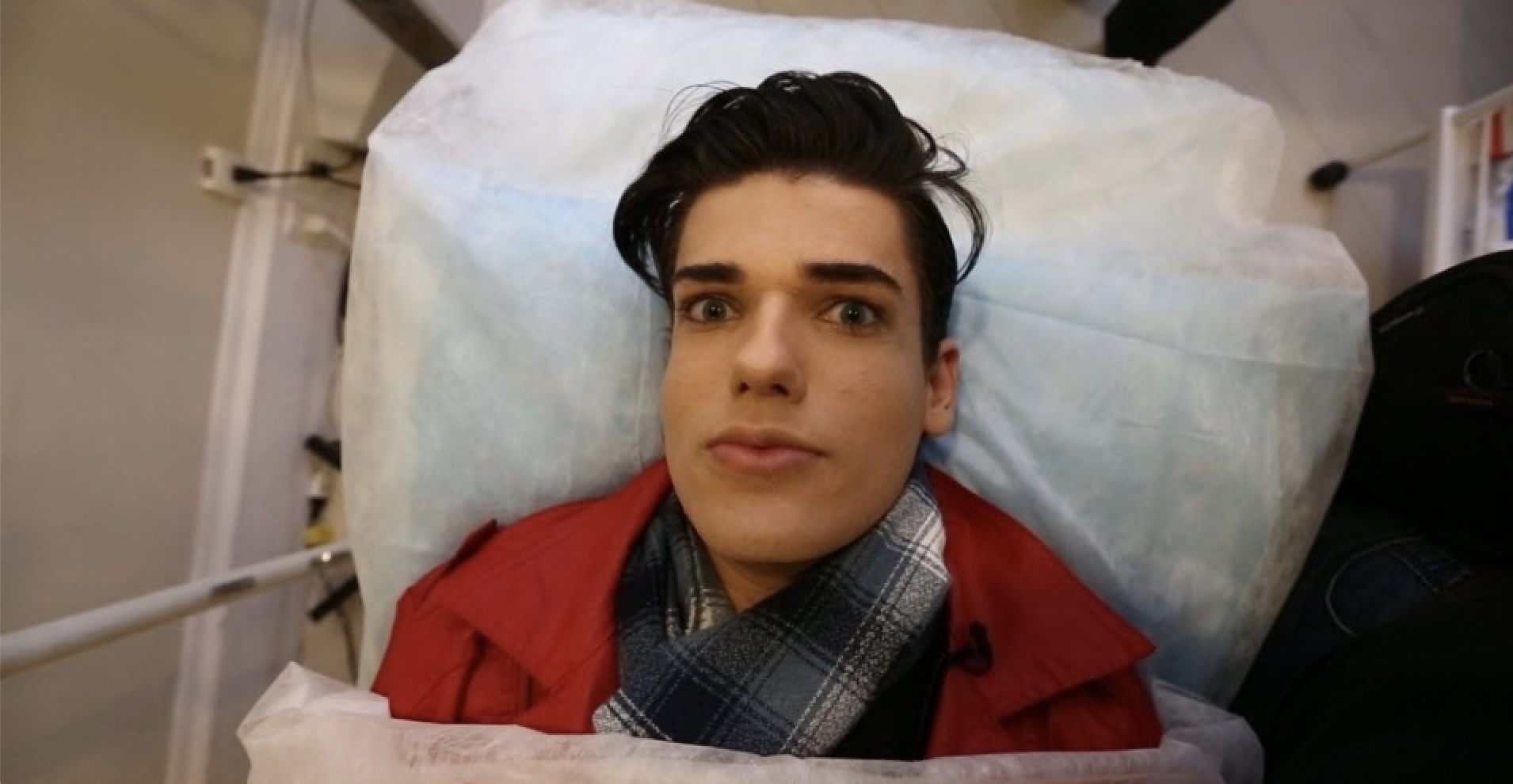 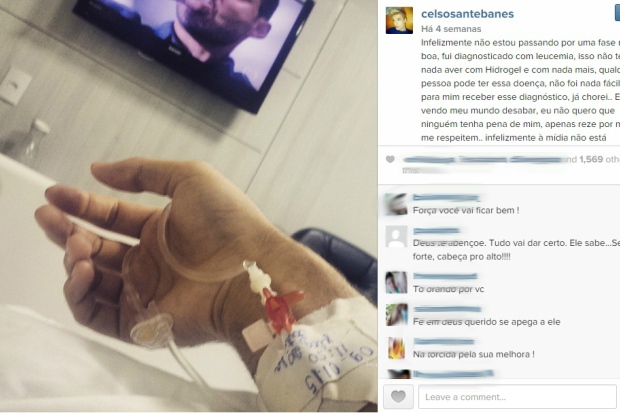 “Today, I start a new cycle in my life,” he told reporters in January. “I am starting chemotherapy and I admit I’m a little concerned about some side effects, like hair loss, nausea, my body’s rejection (of chemotherapy), among other things, but I am no longer concerned with the issue of aesthetics. For me that doesn’t matter. What matters is my health now, and I will fight for it.” 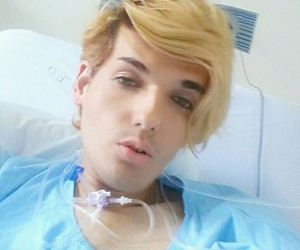 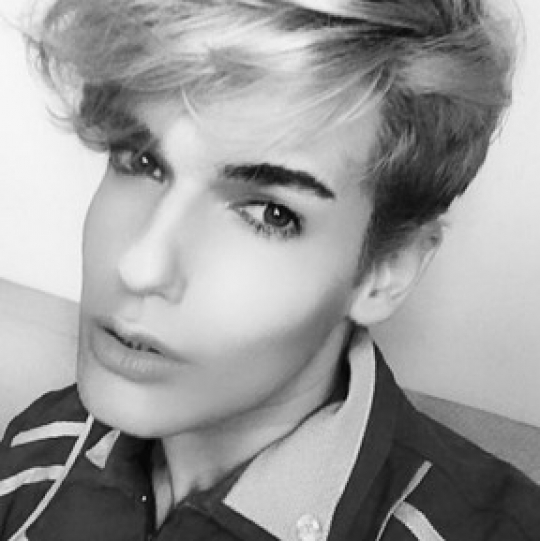 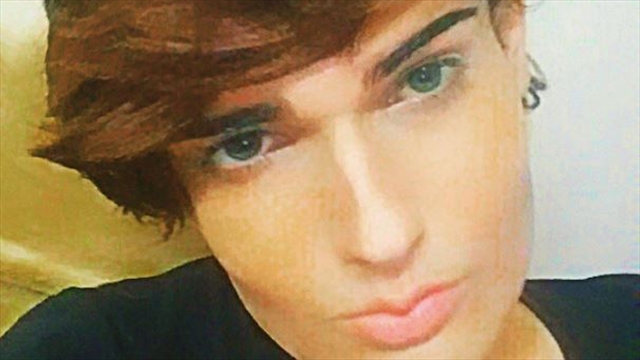 Santebañes was told he had a high chance of beating the cancer, and though finding out he had leukemia was surprising, the doctor’s words made him feel reassured. “When I’m cured, I plan to release a book,” he said in March of this year. “Before, I struggled and did everything to be perfect. Today, God is showing me that there are other values. I think each day of treatment will be a great learning experience. I’ll be a new person. Not that I was a bad person, but I will certainly be a far better person than I was.” 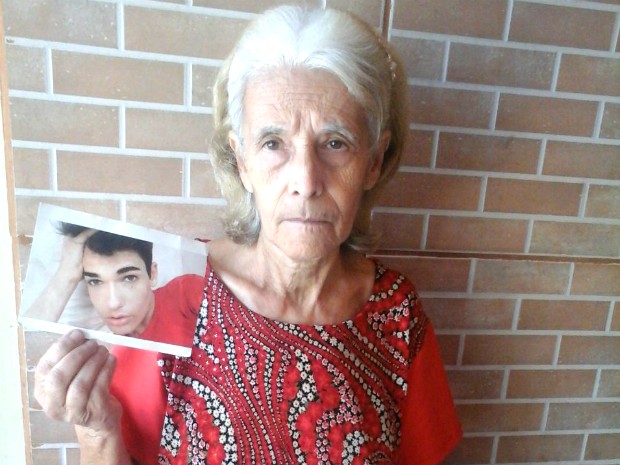 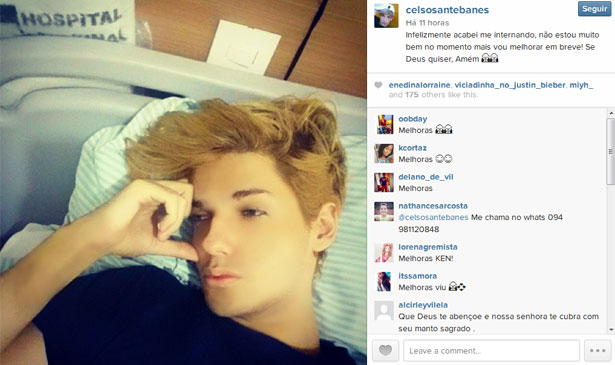 The Times observed: “In his five-month battle with cancer, Santebañes immediately had to confront his own physical deterioration, the undoing of what had become his personal identity and national image. It started with dark spots on his skin and bleeding gums, symptoms of the blood cancer. Once in treatment, his hair fell out. He’d later be confined to a wheelchair, a scrawny pale shadow.” 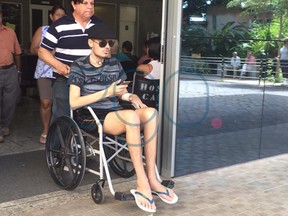 On May 18, Santebañes, wearing a hat and heavy makeup and close to death, reflected on his tragic quest for physical perfection. “Everyone who wants to be pretty, who wants to be perfect, to call attention to themselves, to supplant this lack of … of love, perhaps,” he told Hoje Em Dia. If he survived, he said, he wouldn’t do any more surgeries: “I wouldn’t do any more, what’s done is done.” 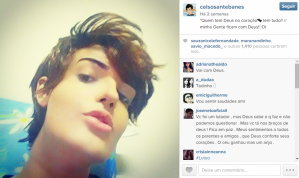 “I want the simple pleasures of life and, if I am told I’m better, I will run to a waterfall,” he said.

Santebañes died last Thursday after contracting pneumonia. He was buried in his native Sao Paulo over the weekend. His father, Celia Borges, told reporters: “When he was starting to fulfill his dreams, he discovered his illness and his dreams were interrupted. He had plans but God had others.” 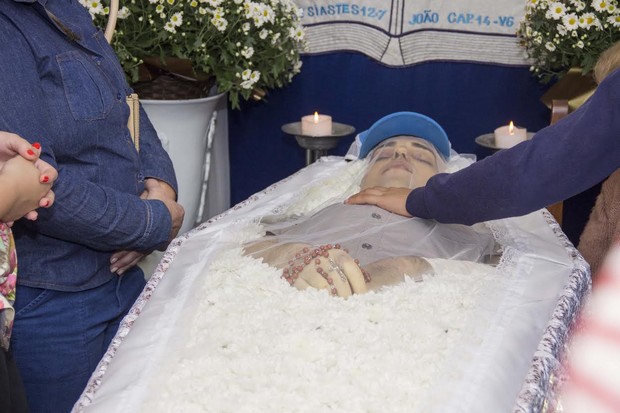 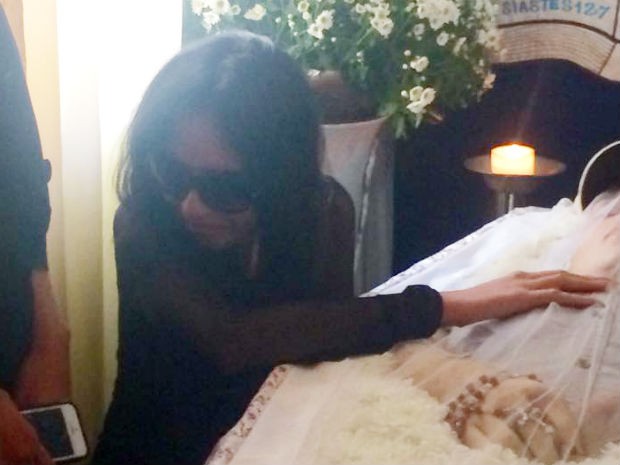 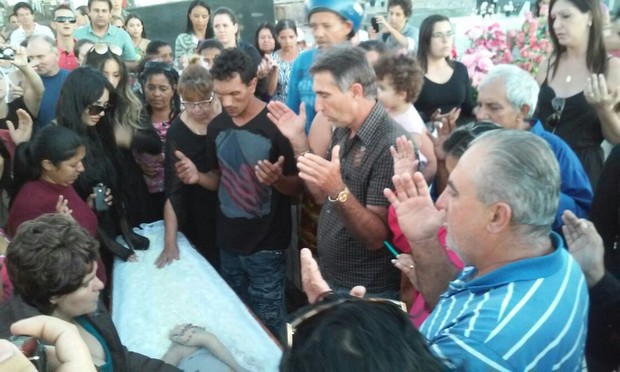 p.s. Hey. ** Colin, Hi, Colin! Yes, I loved ’99 Stories about God’. Did you read that new story of hers in … the New Yorker? I can’t remember where exactly. Really glad you like the Michael Lally. I’m really happy that the book has basically the entire volume of poems I published by him with Little Caesar ages back, ‘Hollywood Magic’. I hope all is great with you, maestro. ** Scunnard, Hi. Really? Even though I forgot to mention that Ashbery was shitfaced drunk? ** David Ehrenstein, Hi. She is very wise. Thanks, David. God knows you know a good anecdote when you see it, so I’ll take that as a big compliment. ** Bill, Hi. Wow, I hit anecdote pay gold, who’d have thunk? Williams is a god. ** Steve Erickson, Oh, great. Thanks! I have to try to not tear myself away from work today, but I’ll delve in that psych feast over dinner or something. Oh, okay, yeah, on the list’s gayness. I was mostly joshing. Excellent about the interview. I’ve been putting together a Schroeder post, so those tidbits are very timely. Awesome. Assuming the post appears in early 2019, which is the thought, I can link to your thing, cool. ** Robert Siek, Well, hi there, Robert! What a pleasure! And a coincidence since your new book just arrived in my mailbox yesterday. That’s almost spooky. Oh, shit, sorry, yeah, I still have this bad habit of not looking at the previous posts’ comments. I really have to get over that. Thanks about my back. It’s being an annoyance, but it’ll behave one of these upcoming days. Oh, yes, Penny Marshall RIP. I never watched ‘L&S’, weirdly, but I remember liking her as a snarky, amusing talking head. Enjoy the family Xmas and the New Years’ sequestering. Sounds nice. I’m at a loss about what my Xmas will be. It usually just comes and goes over here, although I will get to open the big window on my chocolate advent calendar. Take care! ** _Black_Acrylic, Hi, B. It’s a joy. Oops, I didn’t even intend to do that. It is. ** Misanthrope, It’s excellent, a primer, all of that. Yes, I do indeed know young fuck ups who are now adult or middle-aged or even geriatric goody two shoes. Sounds nice: your plans. Lowkey and fun with emphasis on the latter. I’d like to meet Karen. Surely there’ll be some reason to go to DC one of these days. I haven’t been there in, like, 25 years or some shit? Nothing planned for Xmas day. Probably eat a buche. I usually like to go for a long walk because it’s pretty much the only day of the year when Paris gets completely quiet and all-but deserted. ** K$$T$N, That’s like an escort name. Nice. I just sit in my plane seat, click on the first blockbuster movie I haven’t seen, watch, and then click the next one, etc. Since they’re usually, like, 2-3+ hours long, it does eat the time, which needs to be eaten when you’re usually flying all the way from here to LA. I was chased by a shark in Hawaii once when I was 14 years old or something. I think I almost got eaten and died. I felt its teeth scraping my kicking toes. I totally forgot about that. Ha ha, naturally I like that form your Xmas story is taking. I mean what’s not to like theoretically? ** Kyler, Hi. You usually skim the writing sections? You get demerits. See, that’s what you get for being honest. Obviously I’m kidding. Ponchito’s! I love Ponchito’s! Almost every time I’m in NYC I force someone to eat there with me. I think the fact that it’s still open even though it’s vast and always very uncrowded is very suspicious. It must be a mafia front or something. ** Okay. The post today has been restored due to a special request from a reader of this place. Re-enjoy. See you tomorrow.