‘One day in 1998 Kip Kinkel went to school with a gun in his backpack, and he was expelled. The school called in the police and they took him away and called his father to come get him. He later stated that decided then and there that all hope was gone. When he arrived home, he went to his room, got his semiautomatic rifle, and then returned to the kitchen and shot his father to death. Then he called a friend and talked for a while as he waited for his mother to come home. She arrived around 6, parked in the garage downstairs and began to go up the steps. Kip came and told her he loved her before he shot her six times.

‘He covered the bodies of both of his parents with sheets and as he waited through the night, he placed homemade bombs around the home, putting one under his mother’s body. He then turned on the soundtrack to Romeo and Juliet to play continuously, and left a note.

I have just killed my parents! I don’t know what is happening. I love my mom and dad so much. I just got two felonies on my record. My parents can’t take that! It would destroy them. The embarrassment would be too much for them. They couldn’t live with themselves. I’m so sorry. I am a horrible son. I wish I had been aborted. I destroy everything I touch. I can’t eat. I can’t sleep. I didn’t deserve them. They were wonderful people. It’s not their fault or the fault of any person, organization, or television show. My head just doesn’t work right. God damn these VOICES inside my head. I want to die. I want to be gone. But I have to kill people. I don’t know why. I am so sorry! Why did God do this to me. I have never been happy. I wish I was happy. I wish I made my mother proud. I am nothing! I tried so hard to find happiness. But you know me I hate everything. I have no other choice. What have I become? I am so sorry

‘Then he went to school with his rifle and a pistol, and in less than a minute shot 48 rounds into his classmates. He put a rifle to one boy’s head and killed him. He’d also fatally wounded another and hit eight more. Fifteen kids were hurt in the stampede to escape. Some kids wrestled him to the floor and he begged, “Just kill me.”

‘Though he was 15, Kinkel was certified to be tried as an adult. He’d initiated an insanity defense, but dropped it and pled guilty to four counts of first-degree murder and twenty-four counts of attempted murder. He was sentenced to 112 years in prison without parole.’ — trucrimelibrary.com

I sit here all alone. I am always alone. I don’t know who I am. I want to be something I can never be. I try so hard every day. But in the end, I hate myself for what I’ve become.

The only reason I stay alive is because of hope. Even though I am repulsive and few people know who I am, I still feel that things might, maybe, just a little bit, get better.

I don’t understand any fucking person on this earth. Some of you are so weak, mainly, that a four year old could push you down. I am strong, but my head just doesn’t work right.

I feel like everyone is against me, but no one ever makes fun of me, mainly because they think I am a psycho. There is one kid above all others that I want to kill. I want nothing more than to put a hole in his head. The one reason I don’t: Hope. That tomorrow will be better. As soon as my hope is gone, people die.

Please. Someone, help me. All I want is something small. Nothing big. I just want to be happy.

It is clear that no one will help me. Oh God, I am so close to killing people. So close.

I gave her all I have, and she just threw it away. Why? Why did God just want me to be in complete misery? I need to find more weapons. My parents are trying to take away some of my guns! My guns are the only things that haven’t stabbed me in the back.

My eyes hurt. They hurt so bad. They feel like they are trying to crawl out of my head. Why aren’t I normal? Help me. No one will. I will kill every last mother fucking one of you. The thought of you is still racing in my head. I am too drunk to make sense.

Every time I see your face, my heart is shot with an arrow. I think she will say yes, but she doesn’t, does she? She says, “I don’t know”. The three most fucked up words in the English language.

I want you to feel this, be this, taste this, kill this. Kill me. Oh God, I don’t want to live. Will I see it to the end? What kind of dad would I make? All humans are evil. I just want to end the world of evil.

No, I don’t believe in love at first sight because love is an evil plot to make people buy alcohol and firearms. When you love someone something it is always taken away from you. I also would like to add that I hate each and every one of you. Because everything I touch turns to shit. I think if you think you fall in love with someone at first sight it might just be lust.

Love at first sight is only in movies. Where the people in the movies are better than you. That is why you go to a pone [pawn] shop and buy an AK-15 because you are going to execute every last mother fucking one of you. If I had a heart it would be gray.

It is easier to hate than love. Because there is much more hate and misery in the world than there is love and peace. Some people say that you should love everyone. But that is impossible. Look at our history it is full of death, depression, rape, wars and diseases. I also do not believe in love at first sight. But I do believe in hate at first sight. Therefore love is a much harder feeling to experience.

I really wouldn’t know how to answer this question because my cold black heart has never and never will experience true love. I can tell you one about love. It does more harm than good. I plan to live in a big black hole. My firearms and [illegible] will be the only things to fight my isolation. I would also like to point out Love is a horrible thing.

Dedicated to Kip Kinkel by Kindstod

‘In June 2007, Kinkel sought a new trial. He said that his previous attorneys should have taken the case to trial and used the insanity defense. Both a psychologist and a psychiatrist testified on Kinkel’s behalf that he was too mentally ill to understand a plea bargain that sent him to prison for more than 111 years. “He was very, very ill,” said Dr. William H. Sack, the retired director of child and adolescent psychiatry at Oregon Health & Science University, who also treated Kinkel during his stay at the state juvenile prison before Kinkel was transferred to the state penitentiary earlier this month. Both Sack and Dr. Orin Bolstad, a clinical psychologist who is an expert on juvenile offenders, said Kinkel exhibited all the “classic signs” of paranoid schizophrenia, a mental illness Kinkel had gone to great lengths to hide because he feared he would be considered abnormal or even mentally retarded.

‘Kinkel also suffered from hallucinations, hearing “voices” in his head, and from delusions, including his belief that the Walt Disney Co. was trying to take control of the country, and that the government had implanted a computer chip in his brain, Sack and Bolstad said. “Kip Kinkel began hearing voices in the sixth grade, when he was 12 years old,” Sack said. “He was just a kid. He desperately wanted to be normal.” Bolstad added that Kinkel was too young to understand what was happening to him, so he kept his symptoms hidden, even though he later called the voices “a living hell.”

‘In August 2007, a Marion County judge denied him a new trial. Kinkel appealed, arguing among other things that he had had ineffective assistance of counsel during the trial proceedings. On January 12, 2011, the Oregon Court of Appeals affirmed the trial court judgment denying his motion for a new trial. On June 11, 2007, Kinkel, nearing his 25th birthday (maximum age to be held as a juvenile in Oregon), was transferred from the Oregon Youth Authority, MacLaren Correctional Facility, to the Oregon State Correctional Institution, Oregon Department of Corrections.’ — collaged

[15 May 2005|10:15pm] stormygc
hey i wrote kip but did not recive a respose i think it may have been a incorret address does anyone here have the correct one and know for a fact that its the right one thanks a lot ^_^

[20 Jun 2005|04:41am] _stddance
Just wondering… Are there specific things that you cannot send Kip? Are CD’s out of the question? I read that photographs are all right. What about things such as candy? Soap? I know that might sound weird… Is he still at MacLauren? I’m thinking of writing to him. And, by the way, has anyone ever told Kip about this community when they wrote to him?

[11 Aug 2005|09:12pm] bloodycute
I wrote to Kip near the end of April but I never got any response. I think it’s because I gave him my dorm address instead of my home address (dont want my parents seeing that I got a letter from a correctional facility) but this was near the end of the school year and I have no clue if where or when the university would forward mail with an old address on it, bleh.

[24 Sep 2005|10:16am] adamriggs
I wrote to Kip for the first time last month, I just wondered if anyone had heard from him lately, also if he does want to reply to my letter does he usually take a couple months? Im from United Kingdom also though so maybe he will be put off replying to me because of the postage.

JUST KIDDING. I swear reading back in entries someone has asked that question in EVERY post almost!! Jeez. Don’t worry, I’ll look it up myself! What I really posted wanting to know was what do you write to Kip about? You don’t have to tell me anything specific, just general.

His letter was about a page long and handwritten in what I would call not-overly-horrible-but-not-the-best penmanship. I wouldn’t feel right relaying what he wrote word for word here, but the gist of it is that he is doing well, keeping optimistic, and hasn’t gotten into any fights.

Also, some interesting facts Kip shared about himself: “Underworld” and “Underworld 2: Evolution” are among his favorite movies at the moment. His favorite color is black, although he is not gothic. ( To paraphrase his own words ) The way he talked in his letter, I get the impression that Kip loves getting mail from compassionate, understanding people. He even encouraged me to write back! 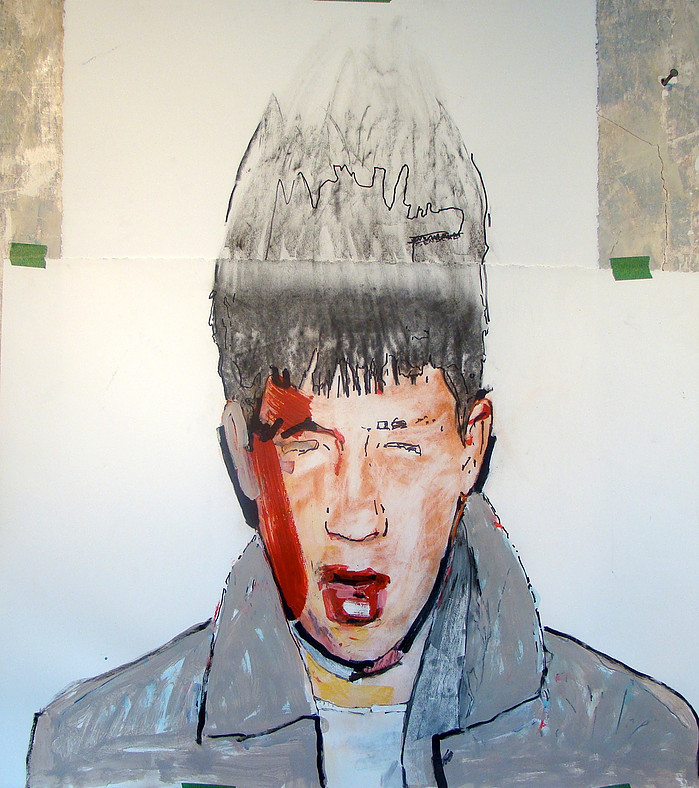 Robert Beck Art Work by Kipland Kinkel For His Parents (2004)