‘Outside Pentalum looks like a giant plastic bouncy castle with coloured turrets and stripes. Inside there’s the strange artificial winds moving about the modules, and patches of coloured light beckoning in the distant gloom of tunnels that branch out in all directions. Little bubble alcoves pop out of the tunnel sides offering personal spaces where you’ll find various entrants sitting, lying, sprawling, and of course jumping, absorbing their surroundings. Despite the barrage of noise and riot of colour, one feels strangely serene amongst it all when not on the move. Not so the children gleefully bouncing off the tunnel sides as they race to explore the next big bright space. I don’t know that I’d describe it as a sculpture experience.’

‘In INVASION, our engineers managed to achieve a unique shaky experience for the passengers of the Space Module. INVASION’S giant slide is an invitation to reach the mother ship and later descend among the aliens to pilot the Space Module.’

‘The visitor’s unavoidable inclusion in the idiosyncratic kinetics of Dana Caspersen and William Forsythe’s White Bouncy Castle creates a choreographic space where there are no spectators, only participants. The choreography that appears, led by Joel Ryan’s encompassing soundtrack, is the result of complete physical destabilisation and the resulting social absurdity. The inadvertant euphoria that results from the situation is infectious and, in some cases, addictive.’

‘A bouncy castle made in the shape of giant breasts is among the attractions at a new exhibition at the Museum of Sex in New York. The exhibits are the brainchild of sensory artists Bompas & Parr, collaborating with Professor Vanessa Toulmin from the National Fairground Archive in the UK.’

‘It adds up to a 1,200-square-metre construction which makes visitors lose their spatial coordinates and leaves them scrambling between the floor and the ceiling, known as ‘earth’ and ‘sky’. This installation, called ‘On Space Time Foam’ is the brainchild of Argentinian artist Tomas Saraceno. The 39-year-old’s work transforms and changes shape when people move around in it – like it’s a living organism. On Space Time Foam, which required months of engineering and static testing, is the accomplishment of a utopian dream for Saraceno, that of flight and lightness moving beyond the limitations of physics by experimenting with new materials and techniques. The work was created thanks to the collaboration of a team of engineers and Lindstrand Technologies, a leading company in the research and production of aerostatic materials and products, hot-air balloons and space vehicles.’

‘As part of the London 2012 Festival celebrations, Turner Prize-winning artist Jeremy Deller has created Sacrilege, a life-sized inflatable replica of Stonehenge which has popped up unexpectedly in locations throughout the country. Deller has described the work as “a way to get reacquainted with ancient Britain with your shoes off” and access to the bouncy castle will be free and open to people of all ages.’ 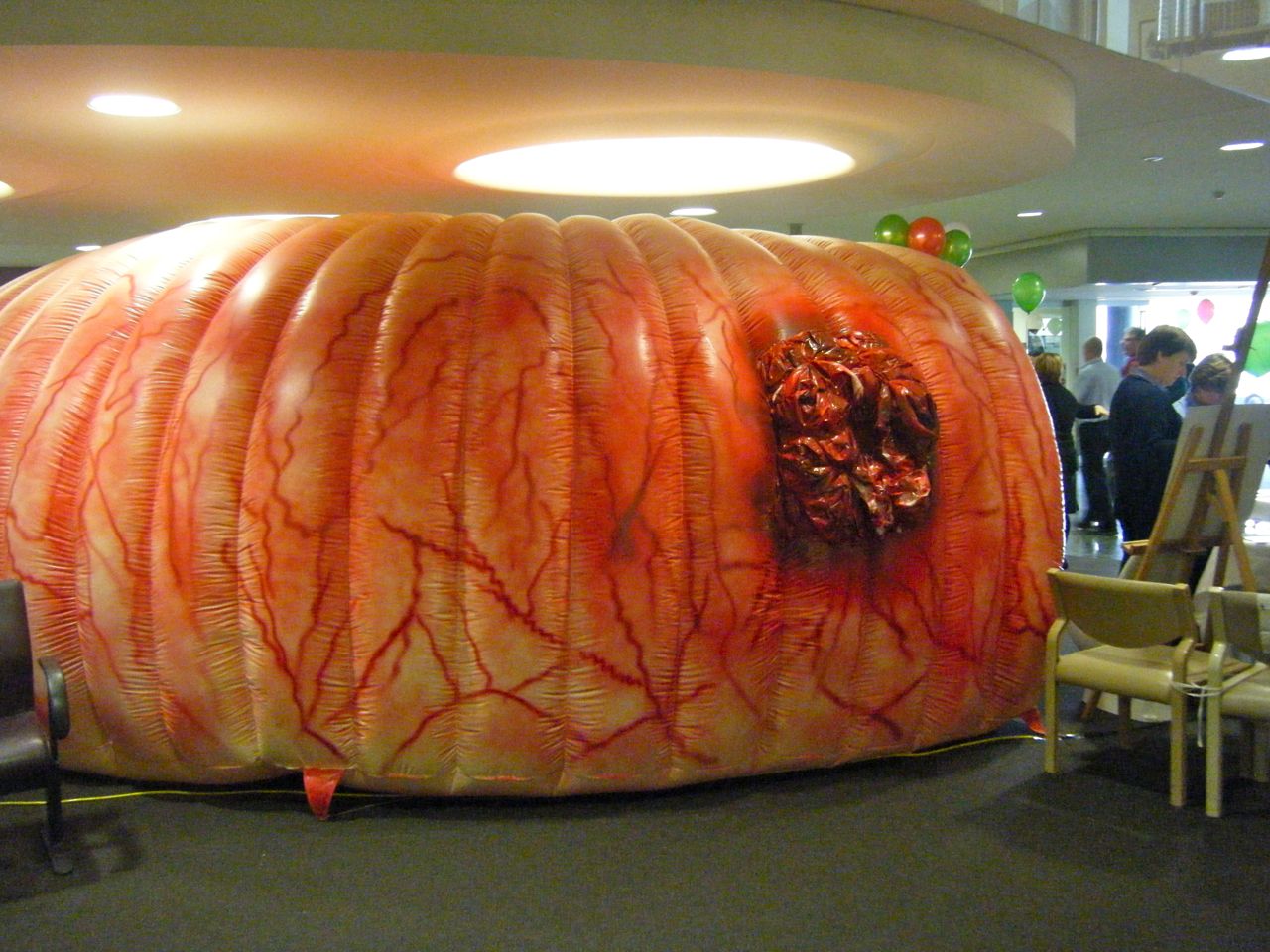 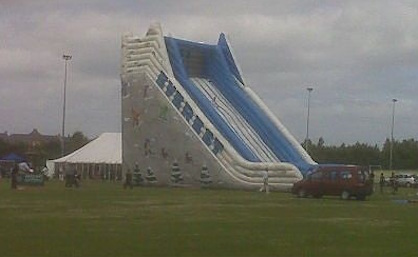 ‘Brook Andrew’s Jumping Castle War Memorial presents a puzzle: as a full-size inflatable ‘bouncy’ castle it offers fun and laughs and an immersive experience, but as a self-titled war memorial it suggests solemnity and reflection. A monumental black figure stands proud atop the Wiradjuri patterns, while skulls dangle like Halloween toys within the plastic ‘windows’ of the castle turrets. The dizzying ‘mix of pop and Wiradjuri-op’, as Anthony Gardner describes Andrew’s patterns, stamps its identity on this fairground symbol of European wealth and power. Andrew offers a contemporary war memorial for the Indigenous people who died after European settlement. His work may also suggest the ‘bounce’ of debate and the verbal jousting of the ‘history wars’. Questions are posed to the viewer – what would it mean to jump on this heritage, this site of commemoration?’

‘When Inez Crawford was a child, she imagined her local marae and meeting house at Te Kaha on the east coast of the North Island was a castle, the kind of grand and glamorous place usually heard of only in fairytales. In this new artwork, she turns her memory into reality. Collaborating with expert balloon-makers, Crawford has created a wharenui in the style of the bouncy castles often seen at fairs and big birthday parties. Brown on the outside and sugary pink on the inside, this is a sculpture you’re welcome to jump around in.’

‘Parisienne architecture firm Atelier Zündel Cristea have proposed a trampoline bridge across the river Seine in Paris. Given that the Seine already has thirty seven bridges across Paris, AZC state that “it appears to us that Paris already has the bridges and passages necessary for the flow of vehicular and pedestrian traffic across its waterways. Our intention is to invite its visitors and inhabitants to engage on a newer and more playful path across this same water.” It was submitted as part of an architectural design competition organised by Archtriumph with the brief of simply designing a bridge in Paris (AZC’s entry finished third). Theoretically the bridge would be constructed close to the pont de Bir-Hakeim, an existing bridge that links the fifteenth and sixteenth arrondissements.’

‘Department of the Interior by artist Tom Dale is a bouncy castle made from black leatherette. You can’t access this piece, says Dale, You have to imagine that you’re bouncing on it, which is twitching the nerves between the brain and the fingertips. Dale uses the word “wrong” as if the castle is a moral error: When something is wrong, we are drawn to engage with it. When things are wrong, we want to put them right, he says. We want to put the house in order.’