24 dilatory machines and their time-efficient namesake * 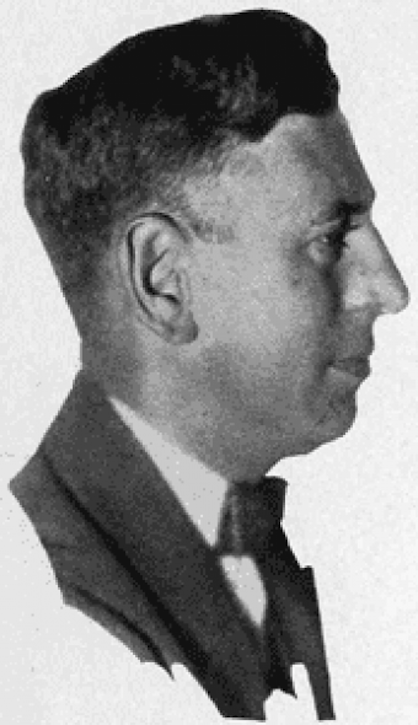 ‘Rube Goldberg is best known for a series of popular cartoons depicting complex gadgets that perform simple tasks in indirect, convoluted ways. Now known as Rube Goldberg machines, these contraptions, devices, or apparatuses are deliberately over-engineered or overdone machines that use an elaborate set of arms, wheels, gears, handles, cups and rods, put in motion by balls, canary cages, pails, boots, bathtubs, paddles and live animals to perform a very simple task in a very complex fashion, usually including a chain reaction.

‘For 55 years Goldberg’s Pulitzer Prize winning cartoon drawings of complicated machines and gadgets satirized government policies, which he saw as excessive. His cartoons combined simple machines and common household items to create complex wacky and diabolically logical machines that accomplished mundane and trivial tasks. Rube Goldberg is the only proper name included in Webster’s Dictionary as an adjective, referring to “accomplishing by extremely complex, roundabout means what seemingly could be done simply.”‘ — rube machine.com 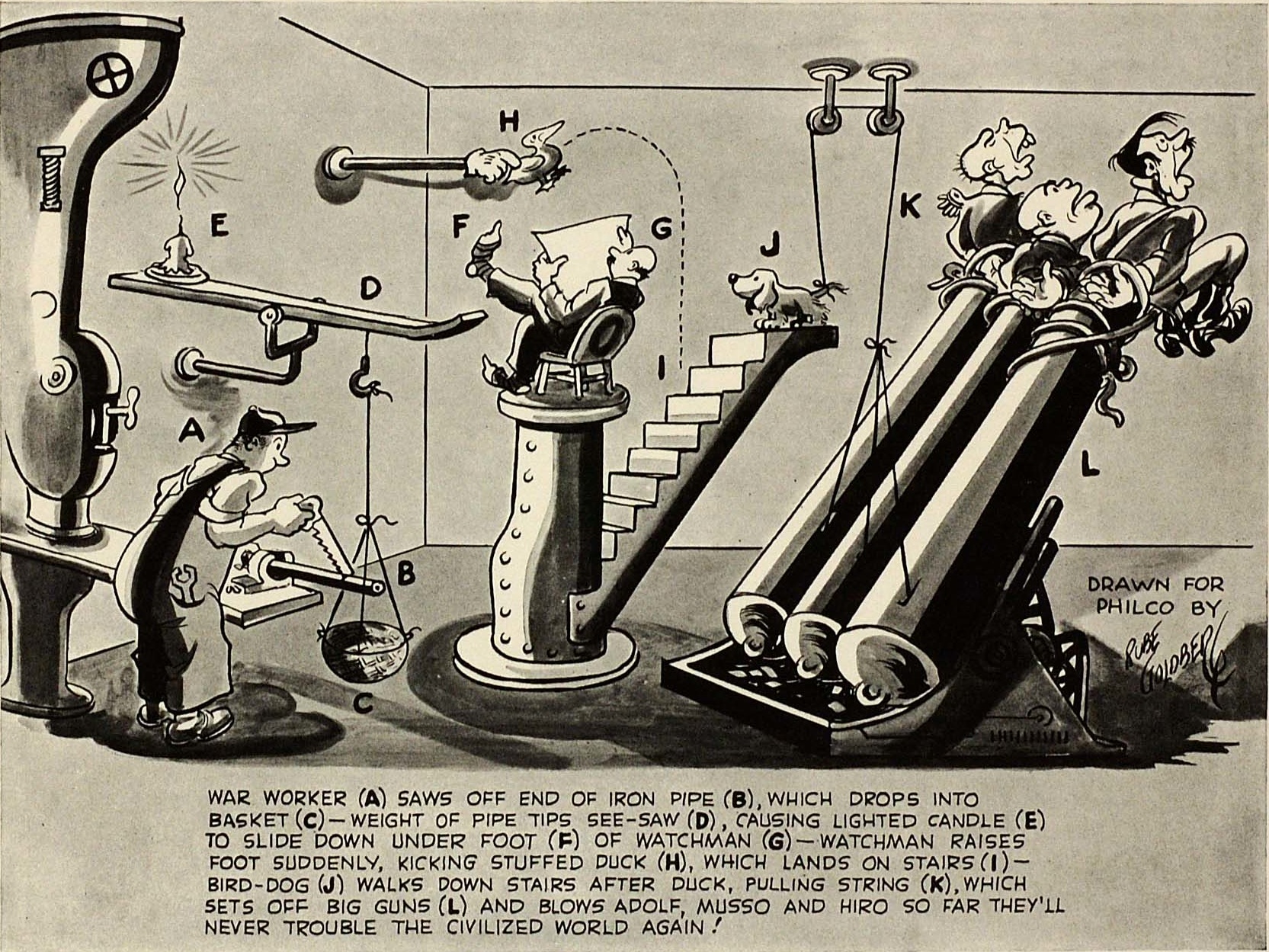 _________
Mouse Trap
‘Mouse Trap is a board game first published by Ideal in 1963 for two or more players. Over the course of the game, players at first cooperate to build a working Rube Goldberg-like mouse trap. Once the mouse trap has been built, players turn against each other, attempting to trap opponents’ mouse-shaped game pieces. Each player is represented by a mouse-shaped game piece which travels along a non-continuous, roughly square-shaped path around the game board from the start to a continuous loop at the end. The object of the game is to trap all of one’s opponent’s mice using the game’s Rube Goldberg-style mouse trap. The trap begins with a crank which turns a set of gears. This begins a series of stages which ends in a cage being lowered over the “cheese wheel” space on the board, which is one of six spaces in the ending loop of the game path.’ — BoardGameGeek

_________________
The Westing Estate
The 2011 National Collegiate Rube Goldberg Machine Contest winner the University of Wisconsin-Stout. The task of their machine is to water a plant. The UW-Stout team’s machine entitled “The Westing Estate” takes 135 steps to complete this task and includes a church, mine shaft, gazebo, gardens, water pump and water wheel, two catapults and about two dozen steel ball tracks.

________________________________
Peter Fischli & David Weiss Der Lauf der Dinge
‘Der Lauf der Dinge (The Way Things Go) is a 1987 art film by the Swiss artist duo Peter Fischli and David Weiss. It documents a long causal chain assembled of everyday objects, resembling a Rube Goldberg machine. The machine is in a warehouse, about 100 feet long, and incorporates materials such as tires, trash bags, ladders, soap, oil drums, and gasoline. Fire and pyrotechnics are used as chemical triggers. The film is nearly 29 minutes, 45 seconds long, but some of that is waiting for something to burn, or slowly slide down a ramp.’ — Icarus Films

___________________________
The Rube Goldberg Machine Contest
‘The Rube Goldberg Machine Contest, held annually at Purdue University in Indiana and organized by the Phi Chapter of Theta Tau, a national engineering fraternity, bring Goldberg’s cartoons to life as a way of helping students transcend traditional ways of looking at problems, taking them into the intuitive chaotic realm of imagination. The resulting inventions are collections of bits and pieces, parts of now useless machines, cobbled together to achieve an innovative imaginative, yet somehow logical contraption to meet the annual contest challenge. Previous challenges have included dispensing an appropriate amount of hand sanitizer, watering a plant, replacing an incandescent light bulb with a more energy efficient design, assembling a hamburger, juicing an orange shredding 5 sheets of paper one-by-one, casting a ballot, peeling an apple, and putting a stamp on an envelope.’ — rubemachine.com

_________________
School Science Projects
‘seekmariaXD Thanks to your video im doing an amazing 5th grade project I tweeked some things to suit me and changed it up a little butthanks to you I actually have a base on what to start with. superman3343 That sounds great 😀 u should send me a vid when its done daveedwards3324234 This is pointless. There’s supposed to be something cool that happens at the end of it. I built a machine in 6th grade that lit small fires at various points around a certain area, each of which cooked a different meal, and one of which began a process of roasting a chicken. And in the end we all sat down and ate the shit like men, with our hands. Ha! I muse at your small minded experiment. superman3343 Do you feel proud of yourself? 😀 halfbuc you are awesome (not) MadameSponge Guys leave him alone. Hes a kid, calm down. geez. tommy560987 hello my name is fucky Mc fuckerstun superman3343 whatever. I don’t need to take this from some 8 year old on the internet.’ — youtube

_________
Domino Day
‘Domino Day was a world record attempt for the highest number of toppling domino stones, organized from 1998-2009 by Endemol Netherlands. Together with Weijers Domino Productions of Robin Paul Weijers, also known as Mr. Domino, parties teamed up to set a new world record. The production was mainly organized at the WTC-Expo in Leeuwarden, Netherlands and broadcast live on television across Europe. The current and standing world record of 4,491,863 toppled dominoes was set by a group of German dominoes enthusiasts at the final Domino Day in 2009. At the height of Domino Day’s popularity in 2002, the television broadcast attracted over 41 million viewers.’ — DominoFans.com

_______
Clockwork
‘This is Clockwork, my fifth major K’nex ball machine, and my largest and most complex K’nex structure to date. It took 8 months to build in my bedroom, has over 40,000 pieces, over 450 feet of track, 21 different paths, 8 motors, 5 lifts, and a one-of-a-kind computer-controlled crane, as well as two computer-controlled illuminated K’nex balls.’ — Austin Granger

__________________________
Rowland Emett’s Dream Machines
‘Rowland Emett was an English cartoonist and constructor of whimsical kinetic sculpture. Much of his career was spent designing and supervising the building of what he called his “things” – always with silly names such as The Featherstone-Kite Openwork Basketweave Mark Two Gentleman’s Flying Machine, two copies of which exist. In the mid-1960s he was commissioned by Honeywell to create a mechanical computer, which he named The Forget-Me-Not Computer. In 1968 he designed the elaborate inventions of Caractacus Potts (played by Dick Van Dyke) for the film Chitty Chitty Bang Bang. In 1973 his water powered musical clock, The Aqua Horological Tintinnabulator, was installed on the lower floor of the Victoria Centre, Nottingham, UK. His larger works, such as Emettland, went on extended tours, ending up in prestigious venues such as the Smithsonian Institution in Washington.’ — mech.mcmaster

_______________________
Dorm Room Goldberg Machine
‘In 2004, four graduate students in Manufacturing Engineering at St Johns College got together and created a Rube Goldberg machine made out of stuff that was lying around their dorm rooms.’ — hacknmod.com

__________
Time Machine
The 2011 Purdue University Rube Goldberg machine shattered the world record for most steps ever successfully completed by such a machine. In 244 steps the “Time Machine” traces the history of the world from Big Bang to the Apocalypse before accomplishing the assigned everyday task of watering a flower. The record has been sanctioned by the Guinness Book of World Records and the World Records Academy.

_____________
Marble Mountain
It has so far taken him three years and consumed almost his entire garage, but Ben Tardif has not yet finished his unbelievably intricate marble machine. A video shows his incredible hand-made contraption in action after years of painstaking work from the Californian builder. In the video, uploaded to YouTube by Ben on March 31, hundreds of silver marbles are hoisted up to the top of the mountain by a giant winch. In total 25 sections slot together to form a one-of-a-kind sculpture where every element is themed along its creator’s life. The marbles race along the course, fly over ski jumps, rocket round a rollercoaster, cross over a tiny rope bridge and trickle through a giant castle. Everything is custom-made and built almost entirely from wood, and Ben had to move his creation to a small warehouse after it got too big for his apartment after a year-and-a-half.

_________________
Rube Goldberg machines by DoodleChaos
‘Hey everybody! I make rube goldbergs, chain reactions, and a bunch of crazy stuff. Tell me what you think! I believe that short complicated rube goldbergs can be more entertaining then long boring ones.’ — DoodleChaos