HE TOOK HER FOR A BOY
Dodgson, Charles (1832 – 1898)
A four-page autograph letter signed “Lewis Carroll”, 12th August 1879. Written to “Mabel” [Burton], making reference to mistaken gender and identity. Written on one folded sheet of paper. Dodgson states that he was “puzzled… the other day at the Langham Hall…” The recipient of the letter was wearing “a funny sort of cap” and Dodgson therefore took her for a boy. Dodgson continues, “if only your face had been a little longer, and not quite so rosy, you would have been Ernest Nicholls…” and then lists the physical attributes of Master Nicholls concluding “…altogether, it would have been very awkward if your face had been half-an-inch longer: I’m glad it wasn’t as I would have died of love.” Dodgson then asks the recipient to come to Eastbourne. He states “…it is so lovely here. And I would speak to you, once a month or so – so that you wouldn’t be really dull for want of company…” Very slight spotting at the folds, otherwise in very fine condition.  Price: £3,750.00 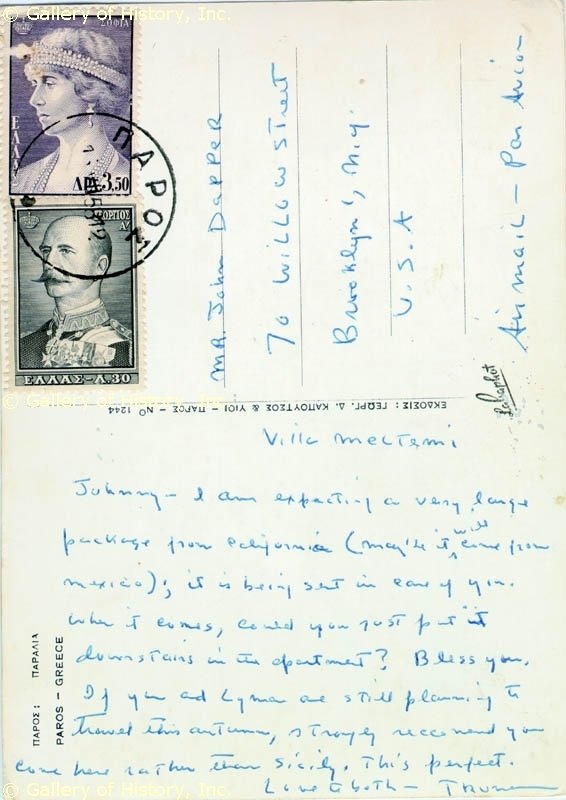 CAPOTE’S SPECIAL PACKAGE
Capote, Truman (1924 – 1984)
53/4×41/4. Villa Meltemi, Greece, 1958. On left message side of verso of picture postcard depicting Paros, Greece. Addressed by Capote to John Dapper, Brooklyn, New York. In full: “I am expecting a very large package from California (maybe it will come from Mexico); it is being sent in care of you. When it comes, could you just put it downstairs in the apartment? Bless you. If you and Lyman are still planning to travel this autumn, strongly recommend you come here rather than Sicily. This (sic) perfect. Love to both.” Two stamps picturing the King and Queen of Greece affixed at upper right and postmarked. Slightly soiled, a little worn at corners, else fine condition.  This item comes with a curious supplemental note handwritten by John Dapper to the postcard’s previous owner, stating that the package Capote was expecting contained a large quantity of cocaine.  Price: £2,299.00 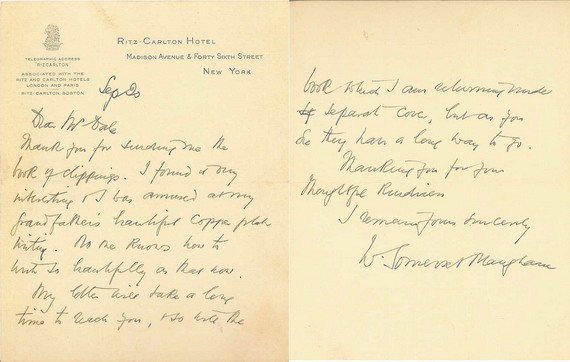 “I AM STINKING DRUNK”
Maugham, W. Somerset (1874 – 1965)
A good two-page autograph letter signed by Somerset Maugham. The author writes on Ritz-Carlton Hotel headed paper to a Mr. Dale. In part, “Thank you for sending me the book of clippings. Granted I am stinking drunk, but I found it very interesting and I was amused at my grandfather’s beautiful copper plate writing. No one knows how to write to beautifully as that now.” In very fine condition.  Price: £175.00 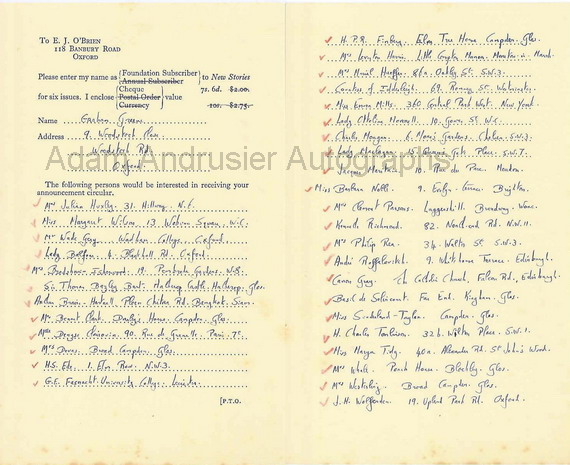 GREENE IS HELPFUL
Greene, Graham (1904 – 1991)
A foundation subscription form for the new magazine ‘New Stories’ (1934) filled out by Graham Greene with his name and address. The author goes on to list thirty four names (front and back of the form) of those individuals that might be interested in receiving the magazine’s circulars. The names listed by Greene include such illuminaries as Ottlilie Morrell, Mrs. Julian Huxley, Lady Balfour and H.S. Ede. In very fine condition with a light horizontal mailing fold. An interesting item.  Price: £325.00 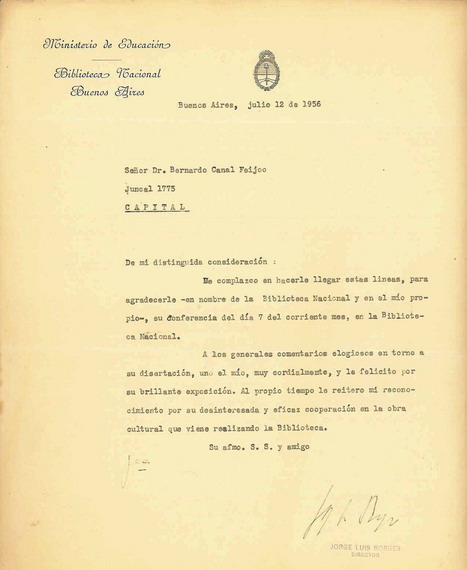 AN ANGRY BORGES
Borges, Jorge Luis (1899 – 1986)
A rare typed letter signed by Borges, July 12th 1956. The author writes on headed paper for the ‘Biblioteca Nacional, Buenos Aires’ to his fellow author Bernardo Canal Feijoo to chastise him for the pathetic conference he took part in at the library. He goes on to mention the inane comments that have been made about his colleagues contribution and thanks him sarcastically for getting involved with the library’s cultural work. Signed boldly in ballpoint pen. In very fine condition.  Price: £595.00 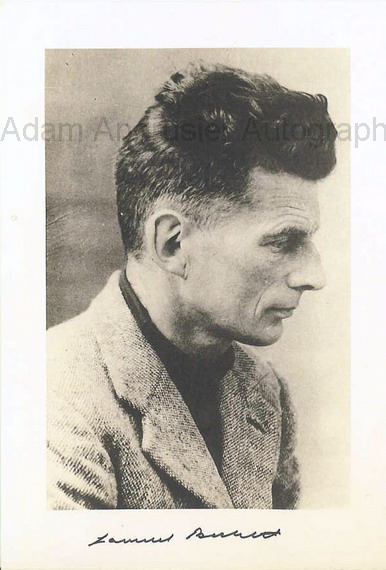 “KILL ME, SIR”
Beckett, Samuel (1906 – 1989)
An excellent signed 6″ X 4″ head and shoulders portrait by Samuel Beckett. A nice matte-finish image of the author, signed boldly to the lower border in ink. In very fine condition. On the back, Beckett has written in an agitated hand, “Kill me. Go on, sir, kill me. I would rather you kill me than look upon me with your ugly pig’s eyes for a moment longer. Remove yourself from me. Take your ridiculous picture.” Quite scarce in this format.  Price: £1395.00 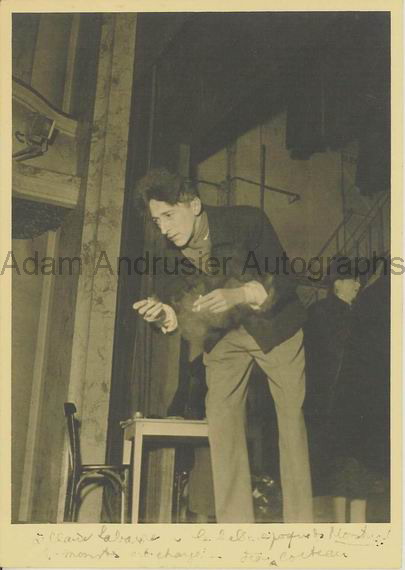 “LA BELLE ÉPOQUE DES MONSTRES”
Cocteau, Jean (1889 – 1963)
A superb and rare signed and inscribed 7.5″ X 10″ photograph. Cocteau is shown apparently rehearsing on stage with a burning cigarette in his left hand. Signed in fountain pen ink to the lower border, “To Claude Labarre – the wonderful era of Monsters! The monsters have changed! Jean Cocteau”). Cocteau clearly makes reference here to his work ‘Les Monstres Sacrés’ which he wrote in 1939. In very fine condition. A wonderful item. Signed photographs of Cocteau are rare. Original Price: £1,250.00 Reduced to: £1,000.00 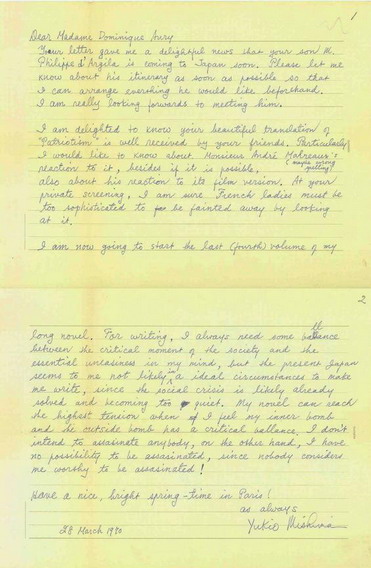 MISHIMA DESCRIBES HIS “INNER BOMB”
Mishima, Yukio (1925 – 1970)
A fascinating two-page handwritten letter signed by Yukio Mishima to feminist author Dominique Aury, 28th March 1970, two separate sheets of paper in fountain pen ink. Some interesting insights into Mishima’s inspiration to write and, penned just eight months before Mishima’s suicide, the letter sheds interesting light on the author’s state of mind. He wirtes, “For writing, I always need some balance between the critical moment of the society and the essential uneasiness in my mind, but the present Japan seems to me not likely in a ideal circumstances to make me write, since the social crisis is likely already solved and becoming too quiet. My novel can reach the highest tension when I feel my inner bomb and the outside bomb has a critical balance. I don’t intend to assassinate anybody, on the other hand, I have no possibility to be assassinated, since nobody considers me worthy to be assassinated!” A superb and important letter in very fine condition. Original Price: £3,250.00 Reduced to: £2,762.50 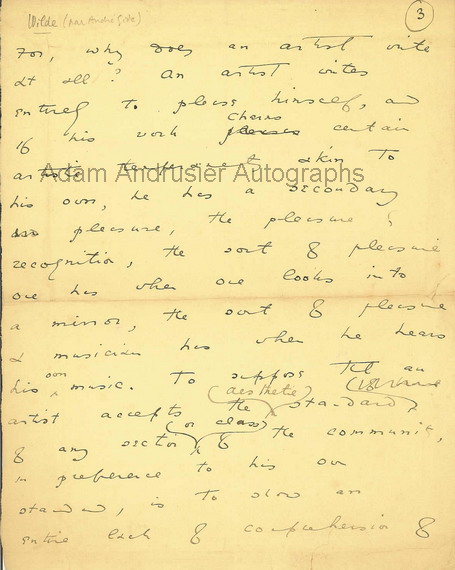 “WHY DOES AN ARTIST WRITE AT ALL?”
Wilde, Oscar (1854 – 1900)
A superb one-page autograph working draft of a section from an essay on artistic processes. Written in ink with several corrections and insertions. A small tear to the bottom and some slight creasing, otherwise in very fine condition. A pencil note at the top, “Wilde (par André Gide)” would indicate that this item may have at some time been in the possession of Gide. Original Price: £5,750.00 Reduced to: £4,887.50 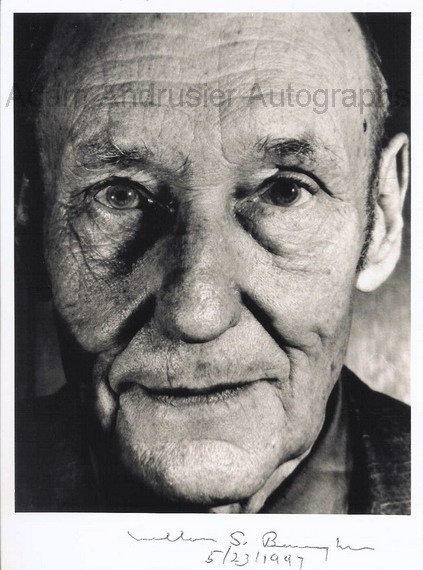 A rare signed 9.5″ X 7″ close-up portrait by William S. Burroughs. Boldly signed by the author to the lower border in ballpoint pen. On the back, he has written in the same ballpoint pen the cryptic phrase, “Screw your son.”  He adds the day, 23rd May 1997. In very fine condition.  Price: £225.00

p.s. Hey. ** Jeffrey Coleman, Yes, I do. As far as I know. Other locals … I think most can see them, and some can’t sometimes. Weirdness. Cool, yeah, come back whenev’, man. ** David Ehrenstein, And few things are happier than a successful amusement park! ** _Black_Acrylic, Hi, B. Yeah, I honestly think that whole Disney parks maintenance report is an accidental great epic poem, and, yeah, I sometimes think the escort and slaves texts are too, except less epic. ** Misanthrope, If you trolled amusement park geek sites like I do, you’d see that yesterday’s post is in fact cookie cutter, just a bit more selective. Yes, it’ll be at Disneyland (Anaheim) and The Magic Kingdom (Florida) and, in a few years, Disney Hollywood Studios (Paris). I don’t give a shit about Star Wars, but I am juiced up about its theme park spin off. I don’t think I was ever taught to fight back as a kid. Or I blanked that advice out. I was a pacifist for a couple years as a hippie-wannabe teenager. Maybe that’s still hanging out in my subconsciousness. I used to get beaten up in elementary school a lot. It was trendy to beat me up for a while. And then it just stopped, and I became arty and cool. That was it. Well, I did get the shit beaten out of me in the pit at a Bad Religion/Melvins gig once. But so did my friends. So I think that was just me innocently happening to be within range. I’m not so into dreams. Mine anyway. I do like daydreams, though. Those are fruitful. ** Steve Erickson, Wow, how awesome if Godard manages to eek out another film. Hope so. Wow. I might give an ear peek to The Drums, you never know. I think there must be many slasher films where teens get slaughtered in a theme park setting, but, it’s true, I can’t think of one. Theme parks are very expensive to rent. But then slasher films usually have at least several million to play with, I guess. ** Okay. Today’s restored post is a really old one. It’s from 12 years ago, amazingly enough. And it probably looks it. But still. See you tomorrow.